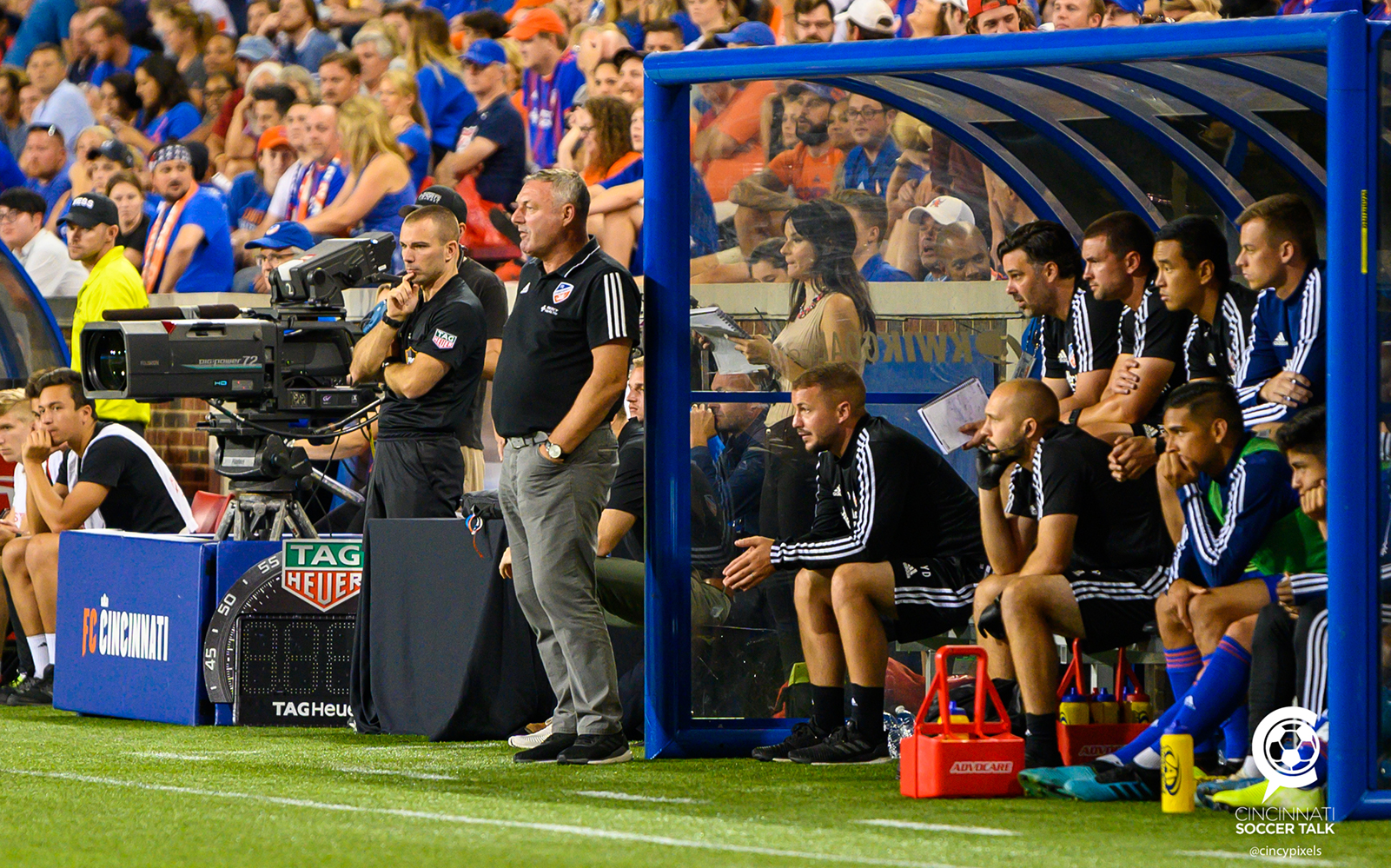 With seven new faces and the potential for more moves before the season starts, here are some questions heading into camp.

When last we saw FC Cincinnati on the pitch, the nine men remaining after two first-half red cards in quick succession gave the gutsiest performance of the year in a 0-0 draw at D.C. United. It was a memorable end to a turbulent inaugural MLS season.

Since then, general manager Gerard Nijkamp shuffled the roster a bit, with seven additions better suited for coach Ron Jans’ 4-3-3 style of play.

The club will find out how the new pieces mesh with the current ones in the next few weeks. Players report on Saturday, but they won’t be in town long.

FC Cincinnati departs Sunday for Tucson, Arizona, for three preseason friendlies. The Orange and Blue play against a to-be-determined opponent on Jan. 29, Sporting Kansas City on Feb. 1 at Grande Sports World in Casa Grande and USL Championship side El Paso Locomotive on Feb. 5. The club returns to town on Feb. 6.

After a few days of rest, it’s off to a familiar spot, the IMG Academy in Bradenton, Florida, from Feb. 10-21 for a few more friendlies. The club plays the Philadelphia Union on Feb. 12 and Nashville SC on Feb. 16 and then has split-squad friendlies on Feb. 21 with USL League Two side Sarasota Metropolis FC and KR Reykjavik. If that last name sounds familiar, it’s because Reykjavik was FC Cincinnati’s first-ever opponent in a preseason friendly back on Feb. 21, 2016, exactly four years prior.

There are currently no plans to have any of the preseason matches streamed online, according to a club media release.

After that, the matches count. The season opens with a road match at the New York Red Bulls on March 1. The home opener — the start of the last season at Nippert Stadium before moving to the new West End stadium — is against D.C. United on March 14.

The fate of three current players — Fanendo Adi, Darren Mattocks and Emmanuel Ledesma — have yet to be publicly decided.

Adi, the club’s first designated player, had a troubled season on and off the pitch and then went public at season’s end with some choice words about Jans and Nijkamp. From that moment, it was clear a mutual parting of ways would be beneficial for both. But Adi remains on FC Cincinnati’s roster — at least for now.

Mattocks logged plenty of minutes filling in for Adi and had three goals and three assists in 13 starts and 21 appearances last year. But with his budget charge, there was plenty of fan debate about whether FC Cincinnati should shop him. If the club has, it has yet to find a suitor.

Ledesma, a fan-favorite and 2018 USL MVP, had his option declined by the club. The two sides had been working on a new deal. At the time of publication, Ledesma is still listed on FC Cincinnati’s roster.

FC Cincinnati is still looking to add to and subtract from its roster. One of the additions is rumored to be PSV Eindhoven’s Gaston Pereiro. No deal between Pereiro and another club has been reached at the time of publication. The primary transfer window opens Feb. 12 and lasts until May 5. The secondary window is July 7-Aug. 5. Clubs must be roster compliant by Feb. 28.

“There’s still one DP position available for us,” Nijkamp said during Kubo’s introductory press conference on Monday. “We are looking for that DP player. We are looking at the striker position, another offensive midfielder. We’re still focusing on this DP but also focusing on other players. We also are looking to move players. You can’t have 30 players on the roster. We have to help the technical staff on that.”

Here are five questions to ponder as FC Cincinnati enters the preseason:

Is there any way it’s Adi if he’s not moved? Where does Kubo fit? He was a second striker for Belgian side KAA Gent but also spent time on the flanks with the Japanese national team. If Jans uses Kubo as a winger, that makes Mattocks — if he stays — or Vazquez the primary striker unless the club brings in someone else. Jans seemed high on Vazquez during Kubo’s press conference.

Who fits in at center back?

Maikel van der Werff and Kendall Waston paired together for six of Jans’ 10 matches at the end of the year — and Waston missed matches on international duty and yellow-card suspension. When FC Cincinnati signed Pettersson, a two-year captain for Swedish top-flight side Ostersunds FK, the move gave Jans a third centerback option. Which two make for the best pairing in Jans’s system? Considering van der Werff and Pettersson are Nijkamp’s acquisitons, might the odd man out be current club captain Waston, even though he signed a contract extension last year?

The left back was riddled with injuries and made just 11 appearances and nine starts last year. But when he was on the pitch, there was a noticeable uptick in FC Cincinnati’s quality of play. When  Andrew Gutman came in on loan, it gave the club needed depth at the position and allowed Mathieu Deplagne to return to his natural position at right back. And there’s depth on the right as well, with Bailey and Abdul-Salaam joining.

Can Medunjanin unlock the offense?

Medunjanin played every minute of last season with the Philadelphia Union and was a key ball distributor on the attacking end. He led the league in total passes, total passes completed, passes in the opponent’s half and completed passes in the opponent’s half. It’s fun to picture him spraying passes to Kubo, Joseph-Claude Gyau, Allen Cruz, Vazquez and others. But at 34, can he replicate here the kind of season he had with the Union in 2019? If he can, FC Cincinnati is sure to improve on its league-worst 31 goals. And he can be a mentor to Frankie Amaya and other youngsters on the roster.

How much will Jans press?

The first noticeable difference with Jans was the high press installed in the Hell is Real road leg in Columbus. It was hard to sustain for the full 90 minutes, lasting just about a half hour. But the press stunned the Crew, and FC Cincinnati took a 2-0 lead in the match just 23 minutes in. In subsequent matches, wanting to start evaluating for this season, Jans relaxed on the press. Will it return this season, and to what effect?