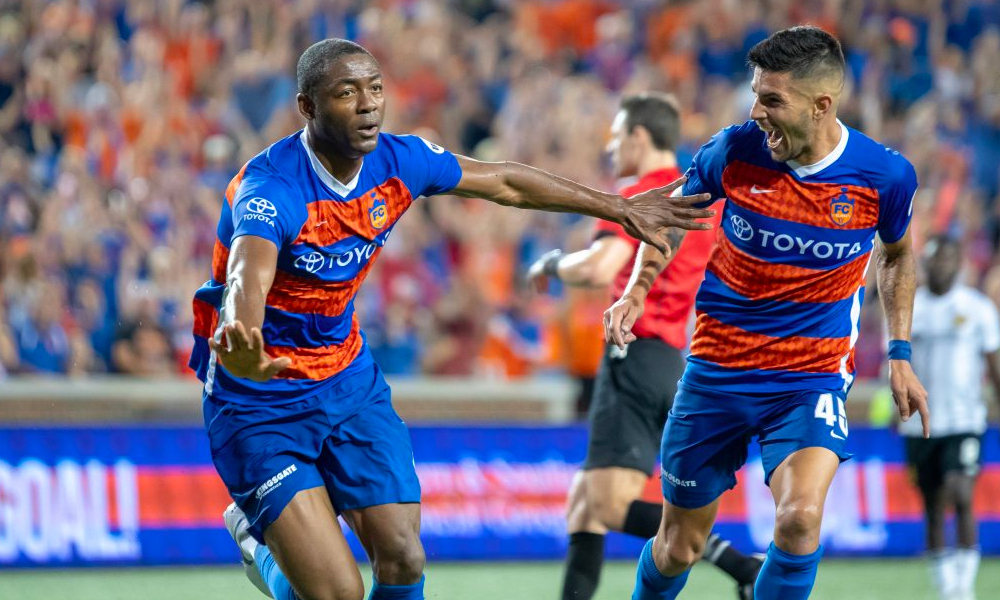 Today FC Cincinnati announced that Fanendo Adi, the club’s first Designated Player in its history has been waived and removed from the club’s roster.

Fanendo Adi’s time in Cincinnati has finally ended. Eighteen months after signing an initial loan to join FC Cincinnati from Portland Timbers FC, the team announced that they have waived the controversial center forward.

Adi, 29, struggled on and off the pitch during his time in the Queen City, scoring five goals in 25 appearances in all competitions. As a designated player, he was the highest earner at FCC, with a guaranteed salary of $1.965 million.

Despite having another year left on his contract, Cincinnati has decided to part ways with Adi now.

When a player is waived, any MLS team can claim him within the next 48 hours. If multiple teams wish to sign Adi, whoever offers to pay the most would get him. But FC Cincinnati will still have to pay his remaining salary for the season. If no other club claims him in the next two days, he will be made a free agent and could sign with anyone.

Regardless of when and where Adi finds a new club, FCC is on the books for a lot of money. Fortunately for ownership, Cincinnati is allowed to buy out the salary of one player per year and remove the money from its cap space. The team has until Feb. 28 to decide whether or not to buy out Adi’s contract.

Many will be relieved by this news. Even for the few remaining Adi fans in Cincinnati, there is no denying his lackluster performances on the pitch and his struggles to stay on it. After playing in the first three games of Cincinnati’s inaugural MLS season, he missed the next seven, and he only featured in 12 games by season’s end.

While Adi suffered from an ankle injury early in the campaign, it was his suspension for operating a vehicle while impaired (OVI) that truly set him back. He was suspended for most of April and was entered into MLS’s Substance Abuse and Behavioral Health program.

Adi featured in five games in the next three months, scoring twice — game-winning goals against Louisville City in the U.S. Open Cup and Chicago Fire in MLS. He suffered another injury at the end of July and never featured for FCC again. His last performance came in a 2-0 loss to New England on July 21.

With the arrival of general manager Gerard Njikamp and new head coach Ron Jans, the writing was on the wall for Adi. While he claimed he was ready to return from his injury, management disagreed, and Adi filed a formal complaint against FCC with the MLS Players Association.

“The new management has made it very clear to me that I am not a part of the team,” Adi told Laurel Pfahler of The Athletic. “Gerard told me in his first meeting with me. … He told me he spoke to (owner) Carl (Lindner) and he spoke to (president) Jeff (Berding), that I should be put out of the team. That’s what he told me. I don’t know the truth, but when the GM tells the player that, what does that mean?”

Just before the complaint was filed, Njikamp said Adi was still recovering from his latest injury.

“Fanendo Adi was a long time injured,” Nijkamp said in roundtable table interview with The Athletic, Cincinnati Enquirer, and a club staff writer. “He had difficulties to come back. I think he worked hard in the gym and with the performance team … He came back in training and had some difficulties again. Now … he is back training with the team. If you are that long time out of training, you need to catch your fitness again.”

Cincinnati has overhauled its roster since the 2019 season concluded, adding seven new players this offseason, notably new DP signing Yuya Kubo. But Adi’s departure is by far the most significant and shows the direction and ambition of Cincinnati’s new front office.

This move indicates the club is ready to move on and commit to the hard work of improving a team that finished with the fewest points in the league. Surely, a new signing or two will follow as the team frees up a DP spot and provides salary cap flexibility.

2019 MLS SuperDraft 2nd Round pick Jimmy Hague was also placed on waivers today by FC Cincinnati. The goalkeeper made 0 appearances for the Orange and Blue but appeared 19 times in the matchday squad. Details of this transaction are forthcoming.