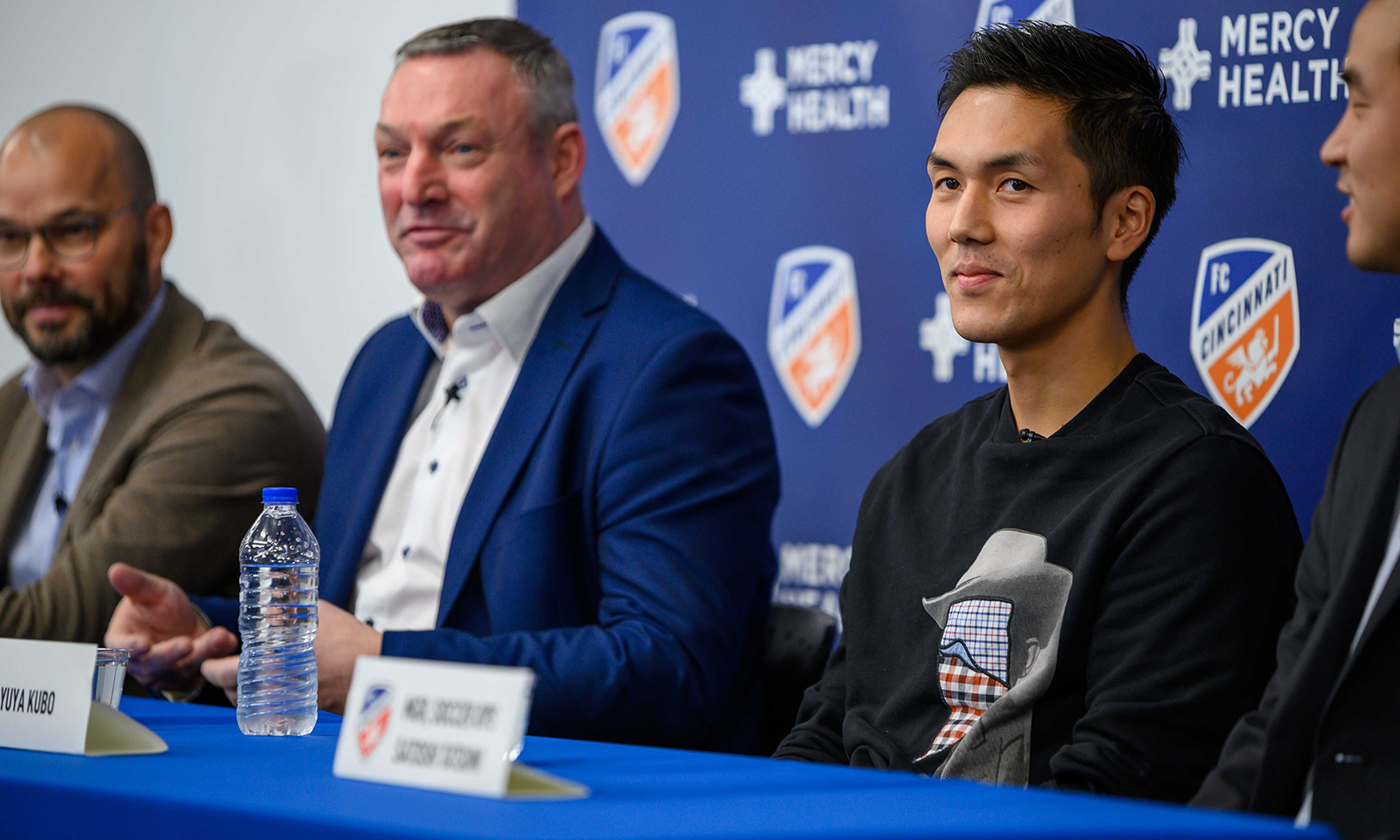 MILFORD – Yuya Kubo wanted a new challenge. His playing time had diminished with Belgium side KAA Gent, where he made only six appearances this season following a loan spell with Nürnberg in the Bundesliga. The window of opportunity opened for FC Cincinnati to swoop in.

“The last few months were not the happiest for Yuya at Gent,” said FCC manager Ron Jans on Monday at Kubo’s introductory press conference at the Mercy Health Training Center. “He did not get a lot of attention from anybody.”

So FCC took a flyer on the 26-year-old Japanese-born midfielder. The deep Dutch connections that Jans and FCC general manager Gerard Nijkamp have fostered over the years again served them well, as did familiarity with a member of the coaching staff at Gent.

The roughly two-hour drive from Holland to Belgium where Jans and Nijkamp met with Kubo and his agent in November paid off last week when his transfer to FCC as a designated player was made official.

Kubo will occupy an international roster spot and be added to the roster upon receipt of his P-1 Visa and international transfer certificate when the primary transfer window is opened Feb. 12.

“He is for us, an impact player,” Nijkamp said. “He will be important added value for our front positions. Yuya is a player who is comfortable on the ball. He’s good in small spaces. He is a player who can make a difference to our roster in 2020.”

It can be assumed that a relatively young player of Kubo’s ability who has experience in the top-flight both in Belgium and Germany would draw considerable interest, so how did an MLS side coming off a historically poor inaugural season land the Yamaguchi, Japan, native?

“We drove at the end of November from Holland to Belgium, and we met the player and his agent,” Jans said. “I really liked his personality. In the end, it was up to Yuya to decide to come to our project. We want to improve. We want a better club in MLS, and I think he will help, especially in the attack. We will love him. We will help him.”

During his press conference, Kubo said he was sold on FCC’s direction and the improvements they have made in preparation for the franchise’s sophomore season.

“I am very happy to be here and happy to join this club,” Kubo said. “I can’t wait to start to train. FC Cincinnati has a lot of fans in the stadium every game. I really like the city. I’m excited to join an ambitious club. This will be a great experience for me. I wanted a new challenge with a new club.”

Kubo is expected to slot in as an attacking midfielder who plays more inside. He has 303 career appearances while scoring 86 goals and adding 23 assists in 10 professional seasons in Belgium, Germany, Switzerland and Japan. He has 29 combined appearances in UEFA Champions League and UEFA Europa League matches, having scored in qualifying rounds of both competitions.

In four seasons with Swiss power BCS Young Boys, Kubo made 137 appearances, including 78 starts, while scoring 39 goals and adding 15 assists across all competitions. At Young Boys, he played alongside former FCC midfielder Leonardo Bertone for four years and one season with Atlanta United’s Josef Martinez.

As a Japan international, Kubo has made 13 appearances, scoring two goals and adding two assists since making his senior international debut in 2016.

“I don’t want to put too much pressure on Yuya,” said Jans. “We need to be creative, score more goals, and create more chances. With a left-footed center back who’s comfortable on the ball, we have more options. He has exceptional skills in the last third.”

Nijkamp said on Monday there is still work to be done in this transfer window to build FCC’s roster for the final season in Nippert Stadium, and that includes additions and reductions. Prior to Kubo’s press conference on Monday, the club announced Bertone had been transferred to FC Thun of the Swiss Super League. And rumors persist about a move for Gaston Pereiro from PSV.

“There’s still one DP position available for us,” Nijkamp said. “We are looking for that DP player. We are looking at the striker position, another offensive midfielder. We’re still focusing on this DP but also focusing on other players. We also are looking to move players. You can’t have 30 players on the roster. We have to help the technical staff on that.”

Kubo was the second high-profile signing of a Japanese-born professional athlete this month in the Queen City. The Cincinnati Reds last week announced they had signed outfielder Shogo Akiyama to a three-year, $21 million contract. The terms of Kubo’s deal were not disclosed. Kubo said he is familiar with Akiyama and hopes to meet him soon.

Although Kubo is working to improve his English, he did not need to defer to his native language during Monday’s press conference. But Jans said what impressed him most about Kubo during their initial meeting had nothing to do with the words he spoke.

“You can listen to what people say,” Jans said. “but what I saw in his eyes was very good. They kind of lit up.”