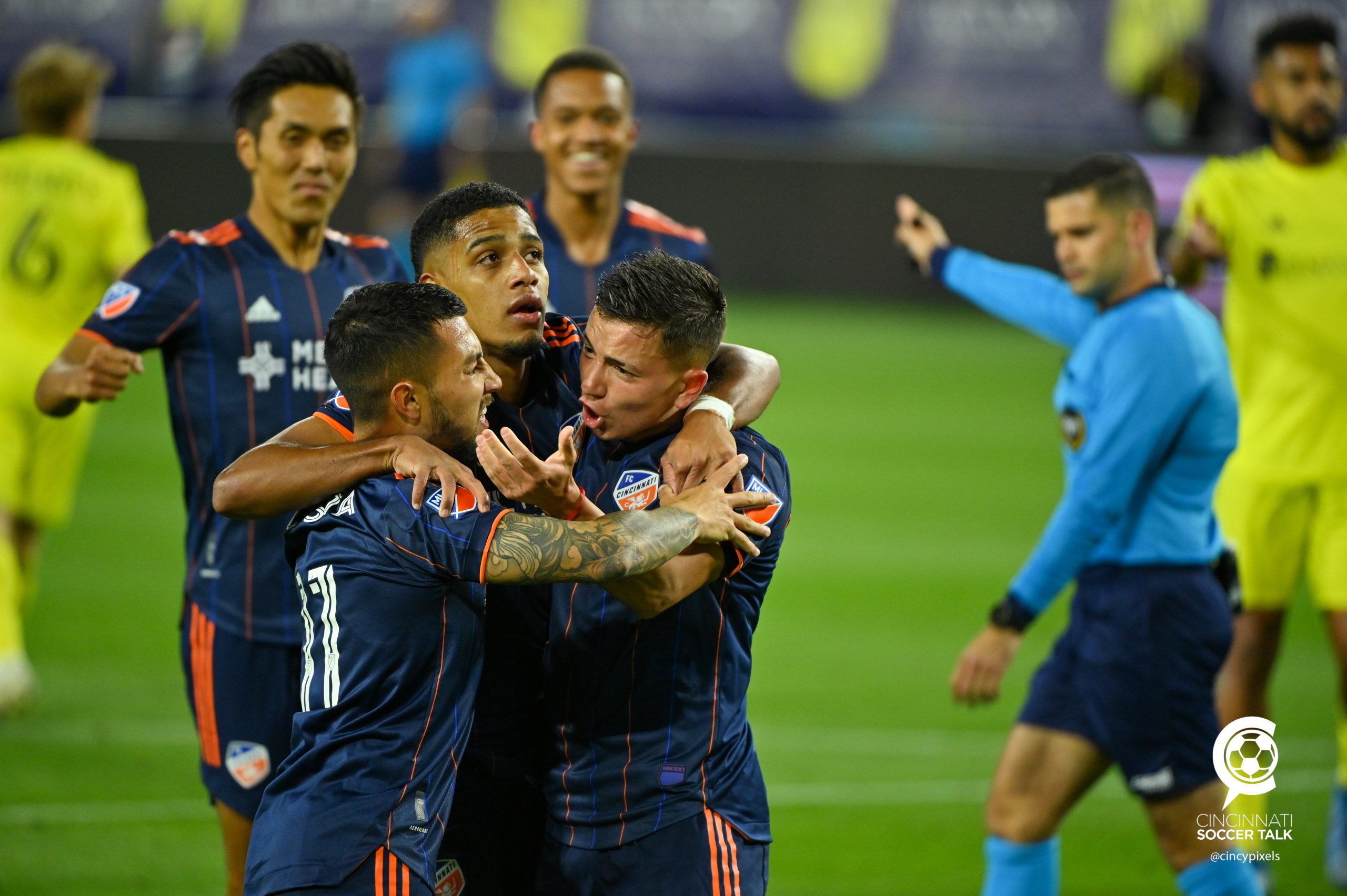 With FC Cincinnati returning to the field in just a few days, here are some things I’ll be watching for this weekend and in the weeks and months that follow. I chose eleven things for gimmicky soccer related numbering reasons and because if I didn’t cut myself off, I probably could’ve kept going. These aren’t in any particular order other than some that I lined up with the conventional numbering system because I couldn’t help myself.

The roster Chris Albright inherited coming into his first offseason as General Manager didn’t have a lot of possibility for quick turnarounds. Goalkeeper was one. FCC’s goalkeepers have been historically bad shot-stoppers for the team’s entire tenure in MLS. Alec Kann has been a good shot-stopper in limited MLS minutes as well as USL minutes. Replacing Tyton, Vermeer, and Cody Cropper’s minutes in goal with Alec Kann could actually make a huge difference in terms of results. Just getting average shot-stopping in the league should translate into more points, and hopefully, lead to FCC relinquishing the Wooden Spoon.

Pat Noonan is going to bring a different tactical approach to Cincinnati than what we watched in 2021. Earlier in the offseason, I wrote a little bit about how Lucho Acosta could benefit from more transition opportunities. The switch from Jaap Stam’s Dutch Total Football system to what we all expect to be Pat Noonan’s approach with similarities to the Philadelphia Union seems like a big shift. Philadelphia’s aggressive pressing high up the field is a hallmark of the Union’s system and one that many Orange and Blue supporters, including me, will be looking for in 2022. However, FCC actually pressed opponents a lot in 2021. Slightly more than the Union did, in fact. 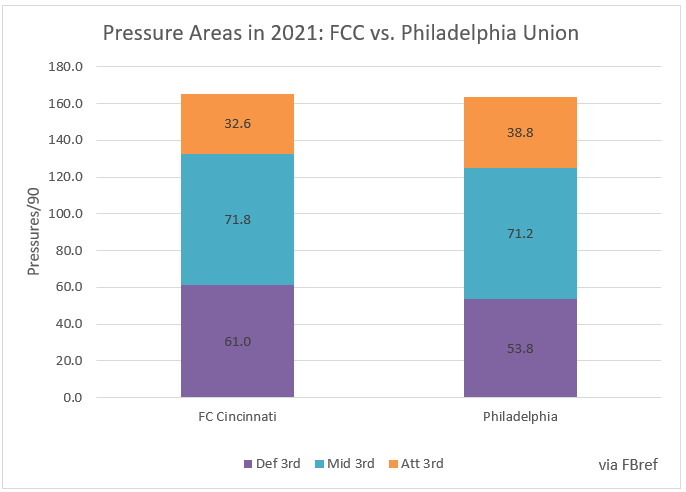 However, the Union pressed more often in the attacking third and less in the defensive third. Also importantly, Philadelphia was more successful in generating turnovers shortly after those pressures. Philadelphia pressure success rate (regaining the ball within five seconds of the pressure) was 30.7% compared to FCC’s 27.1%. That might not seem like a lot but over the course of 90 minutes, it translates roughly to the Union winning the ball six more times after a pressure than FCC. When those pressures come in more dangerous areas of the field, the turnovers do too, potentially setting up better attacking opportunities.

The 2022 MLS season begins this weekend

Will Bob Bradley have Toronto pressing as high as his LAFC team did in 2021?@MLS | #MLSIsBack pic.twitter.com/i4FDpNAF9h

If Noonan and his staff can create advantageous situations in which to press high up the field, FCC should be the better for it. In 2021, FCC showed it was willing to press, in 2022 I’ll be watching to see if Noonan and Co. can get the team to press smarter too.

Speaking of other areas where nearly any new player represents an upgrade, the additions of Alvas Powell and Ray Gaddis give FCC options at right back. Zico Bailey showed some upside in 2021 but probably isn’t ready to hold down the position himself. Gaddis and Powell give Noonan options at right back who have experience and not just playing in MLS. Both played for Philadelphia and should be able to bring a solid tactical understanding of what’s expected of them, even as other players could still be struggling to adapt just coming out of preseason.

Philadelphia relied on its fullbacks to push the ball forward as well as contribute in the final third.  Rónald Matarrita should thrive in a similar role. Matarrita’s ability on the ball, whether dribbling or passing, will push FCC forward out of defense. Once in the final third, Mataritta demonstrated his ability to combine in tight spaces with teammates though he did not provide much width.

In Stam’s preferred system, a lack of width was a feature, not a bug. FCC attempted the fewest crosses in MLS, according to Football Reference, and the lack of width hampered the Orange and Blue’s attacking play all season. Noonan’s system should change that. In the 4-4-2 diamond, fullbacks have to provide width in the attack because there’s no winger ahead of them stretching the opposing defense.

Also, Matarrita demonstrated an ability to underlap in attack. So long as a teammate occupies the wide area when Matarrita sits narrower, his skill in the half-space could add a dangerous wrinkle to FCC’s attacking play.

As FCC builds towards the future, establishing a pipeline from the academy to the first team will be vital. This season, injuries and absences of first team players forced Pat Noonan to bring younger players to FCC’s first-team training camps in Florida. Academy members Harrison Robledo and Stiven Jimenez (among others) impressed the first team coaching staff and look like future contributors.

Roman Celentano, Ian Murphy, and Nick Markanich, Chris Albright’s inaugural SuperDraft class, will all be on the senior roster in 2022, as well. Albright’s willingness to take advantage of multiple avenues to add good, young talent to the roster should pay off in the future. Add the above players to returning homegrown signings Quimi Ordonez and Beckham Sunderland and FCC has some young players with upside for the future.

FCC2, which will be playing in the third tier of US soccer’s pyramid, should allow for many of the aforementioned players to get minutes at a higher level than they might otherwise. The importance in the team playing in or around Cincinnati shouldn’t be overstated, either. Players will be able to develop while playing in a tactical system similar to the first team’s, making integration for prospects much easier when the time comes.

Before Monday night this item would’ve been about FCC’s so far unsuccessful search for a defensive midfielder. Now, it’s about the arrival of Junior Moreno. If this list was in order of importance, it would’ve been much higher up the list regardless of when it was written.

Again, operating under the assumption that Noonan and Albright want to operate in a 4-4-2 diamond, FCC needed a defensive midfielder who could shield the backline as well as contribute some passing in build-up play. Moreno checks those boxes plus some others. Albright has talked at length about the importance of MLS experience when building a successful team.

Moreno has played 97 career MLS matches. Moreno also has a Green Card, giving Albright additional flexibility to recoup some of the allocation money outlay by selling an international slot for the season or using a slot to bring in another contributor.

Is the reported $450K in General Allocation Money paid to DC United for Moreno’s rights too high? Maybe. But if Moreno is able to fill the Orange and Blue’s need at the base of the diamond, we won’t be arguing about whether FCC paid $100K too much.

In 2021, FCC wasn’t near the top of many statistical leaderboards, at least not the ones you’d like them to be. There was one exemption: nutmegs. The Orange and Blue nutmegged 37 opponents in 2021, according to Football Reference, third most in MLS trailing only Minnesota United (43) and LAFC (39). Unsurprisingly, Lucho Acosta led the way, megging 10 opponents during the season. FCC’s weren’t able to return the favor, completing just 21 nutmegs. FCC’s +16 nutmeg differential was second best in MLS, trailing LAFC by one. 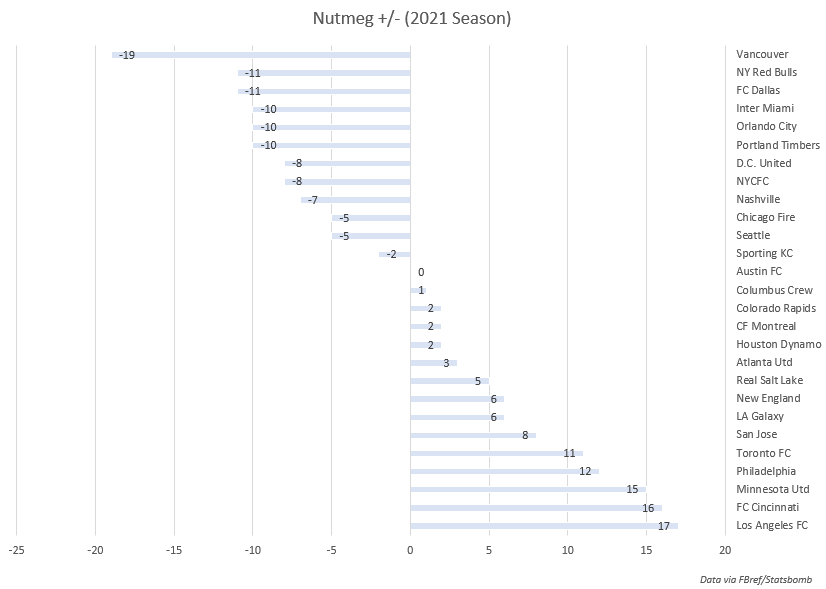 You might be wondering if a new coaching staff might clamp down on the general sauciness on the ball (also why I made a graph about nutmegs). For the former, obviously it’s too soon to tell but Philadelphia finished 2021 with a +12 differential, so hopefully Noonan keeps that in the offensive playbook in the Queen City. For the latter, nope. I’ve got nothing. I’d like to see more nutmegs though.

Cruz & Kubo: Noonan and Albright’s preference for a 4-4-2 diamond should put Allan Cruz and Yuya Kubo in situations to maximize their strengths and minimize their flaws. Both Cruz and Kubo should fit nicely as shuttling midfielders on the sides of the diamond. Defensively, Cruz and Kubo’s workrate should be a great fit. As noted previously, a more structured system should lead to more successful pressures.

Both players should fit going forward as well. Noonan talked about utilizing Kubo’s ability on the ball to link defense and attack. At times in 2021, Kubo showed those qualities, both passing and dribbling. However, often when playing as the deepest-lying midfielder, Kubo operated as a fulcrum to move the ball horizontally rather than vertically.

With a committed defensive midfielder shielding the back line, Kubo should be able to push the ball forward with greater regularity. Cruz, somehow still FCC’s MLS leading goalscorer, demonstrated an ability to make late-arriving runs in the box to get shots on goal. That skill should on display in Noonan’s system.

Brenner’s performances in 2022 could very well dictate how high the ceiling of the Orange and Blue is. If he plays like the player FCC expected, the team’s attack should be much improved. Last week, I wrote about what a successful Brenner-Brandon Vazquez parternship might look like up top.

Noonan’s continued message that he’s trying to get players in the best positions to succeed should be a good thing for Brenner. Time will tell if Brenner will be fully worth the transfer fee he came in for but I’ll be watching to see if FCC can get him into positions where he can do what he’s good. If that happens, I’d expect Brenner to score goals, set up teammates, and push for some recognition in MLS.

As Albright and Noonan look to remake FCC’s roster with their own vision, questions arise about the fit of certain players. Gerard Nijkamp and Stam assembled a roster to play a 4-3-3 with multiple U22 initiative slots (Alvaro Barreal, Isaac Atanga) and significant draft capital (Calvin Harris) devoted to wingers.

In his fascinating interview with CST (seriously, listen to it if you haven’t already), Noonan talked about the potential for formational flexibility to fit the roster. I’d still expect to see a formation with two strikers as his preferred system but there’s some leeway for getting wingers on the field in their preferred spots. Noonan also mentioned a willingness to let those players grow into other spots on the field.

Atanga and Harris seem to have played some striker in preseason. Barreal could be shuttler or a backup for Lucho Acosta at the top of the diamond in an attacking midfield role. How Noonan gets these players on the field to continue their development will be a fascinating thing to watch this season.

Last but certainly not least, we arrive at Luciano Acosta. I’ve written about Acosta plenty during his first year in Cincinnati. He carried a huge attacking load last season, both progressing the ball from deep and then finding his teammates in dangerous areas. Sure, sometimes Acosta will try to do too much and lose the ball trying to dribble by one too many defenders. Or he’ll look off the easy pass in an attempt to find the spectacular. Even when accounting for those things, Acosta is capable of making something out of nothing like no one else on the Orange and Blue.

I spend a lot of time (too much? ¯\_(ツ)_/¯) thinking about why things happened the way they did on the field. In 2022, I’m looking forward to sitting back and appreciating Lucho doing Lucho playing for a team I support. Whether that’s slaloming through multiple defenders with the ball at his feet or picking out the far corner and curling in a shot from 22 yards over the outstretched hand of the opposing keeper, he’s a great player in the league and I can’t wait to watch him play in 2022.