We end our roundtable series today by discussing where we think FC Cincinnati will finish the 2021 season.

FC Cincinnati’s 2021 season-opener is just days away — Saturday at Nashville SC. It’s the perfect time for preseason predictions. This week the Cincinnati Soccer Talk staff will give their preseason thoughts on a variety of items in roundtable format. We started Monday with predicting FC Cincinnati’s 2021 MVP. Tuesday we discussed the club’s potential comeback player. Wednesday we tried to decide who will be the Orange and Blue’s top goal-scorer. We wrap up our series today by predicting where FC Cincinnati will finish the 2021 season. Hope you enjoy and feel free to share your own predictions with us.

Where will FC Cincinnati finish in 2021?

FCC will finish 9th in the Eastern Conference. Maybe this pick is as 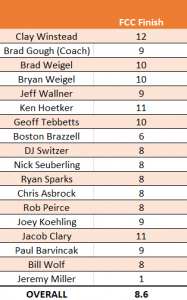 much about what other teams DIDN’T do in the offseason as what the Foosers did. Adding talent up top in Brenner and Lucho Acosta is big, but I’m expecting the players from last year to do the bulk of the heavy lifting from the bottom of the table to respectability. Young guys like Barreal will undoubtedly improve. Joseph-Cluade Gyau has half a season of playing right back under his belt and is only getting better. Finally, Locadia, Kubo, and Cruz all had shockingly terrible seasons. If they take even a small step toward playing to their potential this team will be loads better. What about the defense you say? A good offense will help there some, but not enough. That’s why they finish 9th, just out of the playoffs.

I believe FC Cincinnati will finish 10th in the Eastern Conference. Respectable considering two wooden spoons, yet keeping our dreams of playoffs unfulfilled. To me this boils down to unfamiliarity among the squad and some additional uncertainty with the future of Locadia and exit of Amaya. You are going to see some amazing games, but also some head scratchers, especially in the beginning of the season. My hope is that the club can begin to click in July when the schedule really begins to get congested and maybe get close to that playoff berth. Certainly an exciting season ahead.

If you would’ve asked me before the Frankie Amaya situation blew up, I would’ve said 7th so instead I’m saying 10th. I know it’s boring and a lot of other CST’ers will probably pick the same but Amaya was one of the safety blankets in front of a defense filled with questions. One saving grace is that FCC has improved A LOT more than other MLS clubs this offseason. While it might take some time for the players to gel, I think guys like Lucho, Brenner and Atanga will help FCC catch up and even surpass teams that sat on their hands.

The safe pick as an analyst is to go with the last 4-5 slots. The writers over at MLS did it and I wager most of ours will as well. Why stick your neck out when the club has not proved they can do better? Well, someone needs to believe a little and stick their neck towards the swinging axe that is the season. Major League Soccer is still a place where one player can make a big impact, where a club can jump up the standings after making some changes. Look up the past five-year history of rivals Columbus Crew. This year was made for an FC Cincinnati jump. They spent big when hardly anyone else did. Were all those other clubs in a position they didn’t need to spend because of the pandemic? We shall see, FC Cincinnati finishes sixth in the East. Bonus points — they win a playoff match.

I came out with a lot of optimism for this prediction last year, much to our collective chagrin. So this may be an overcorrection into pessimism but I believe the Orange and Blue will finish 12th in the Eastern Conference this season. No one else invested in improving their team like Jeff Berding and Gerard Nijkamp have the last few months, but I worry about how the pieces will fit together. FCC has a lot of different wingers, a true conundrum at no. 8 and unproven or lackluster options in defense. How this roster fits into a starting XI, and how long Jürgen Locadia and Franko Kovačevic stay in Cincinnati, are big questions for Jaap Stam and the front office. I’m certain they’ll score more than they did last year, and I think they begin to gel in the back half of the season, but I don’t believe it’ll be enough to be in the playoff race. At least the Reds are good this year.

Talent spending sprees turned an average 2017 FC Cincinnati squad into a regular-season behemoth in 2018. While talent alone doesn’t produce hardware, it should keep heads above water and provide a pulse for every game. This retooled offense behind a legitimate #10 in Luciano Acosta and hungry young talent is going to click and gain confidence from the security of playing on a home pitch with ACTUAL grass.The lingering questions will keep the playoffs out of reach. We don’t know what the monkey wrench from the Frankie Amaya trade produces. We don’t know if Jürgen Locadia sticks around. We don’t know how this roster is adjusted for compliance. We don’t know if the defense can keep out less goals than the offense can produce.Look, Nijkamp didn’t pull in all this talent just to rearrange the chairs on a sinking Titanic. Tenth place sounds overly optimistic, but I still think Montreal, DC United, Red Bull New York and Chicago took major steps backwards in comparison.

Projected finish in the table – ninth. FC Cincinnati recorded seven clean sheets last season after allowing an MLS-record number of goals the previous year. Four of those shutouts came in scoreless draws in which the Orange and Blue had ample opportunities to find a winner. It was clear in his first season that Jaap Stam’s objective was to keep this team in matches, to stop leaking goals at a record rate and try to steal some results. This offseason, attention shifted to the attack, with the additions of Brenner and Acosta. The thought being that FCC might, just might be able to turn those draws into wins, which would have been the difference between last place and a playoff spot. I’m not naïve to the roster issues, the uncertainty surrounding Locadia, or the sheer fact that going from two straight bottom finishes to the playoffs this year might be too tall of an order anyway. But I think they make a run at it.

Nijkamp and his technical team went out and did much of the dirty work necessary to improve FC Cincinnati’s squad. They filled needs around the pitch and picked up some players who have the potential to be game-changers. And without a doubt, this team is clearly improved, at least with respect to the previous two incarnations. The questions now are: how much have they improved, and is it enough? If everything goes to plan, Stam’s men have the potential to make some real noise in 2021. But that’s if everything goes to plan. There are lots of players who need to bed-in quickly to their new homes, learn a new system, work out understandings with new teammates and the like. Not to mention key players — Acosta in particular, as there’s no one else in the squad quite like him — needing to stay healthy. There are bound to be some of those growing pains, so I see the team likely finishing seventh and earning their first playoff birth.