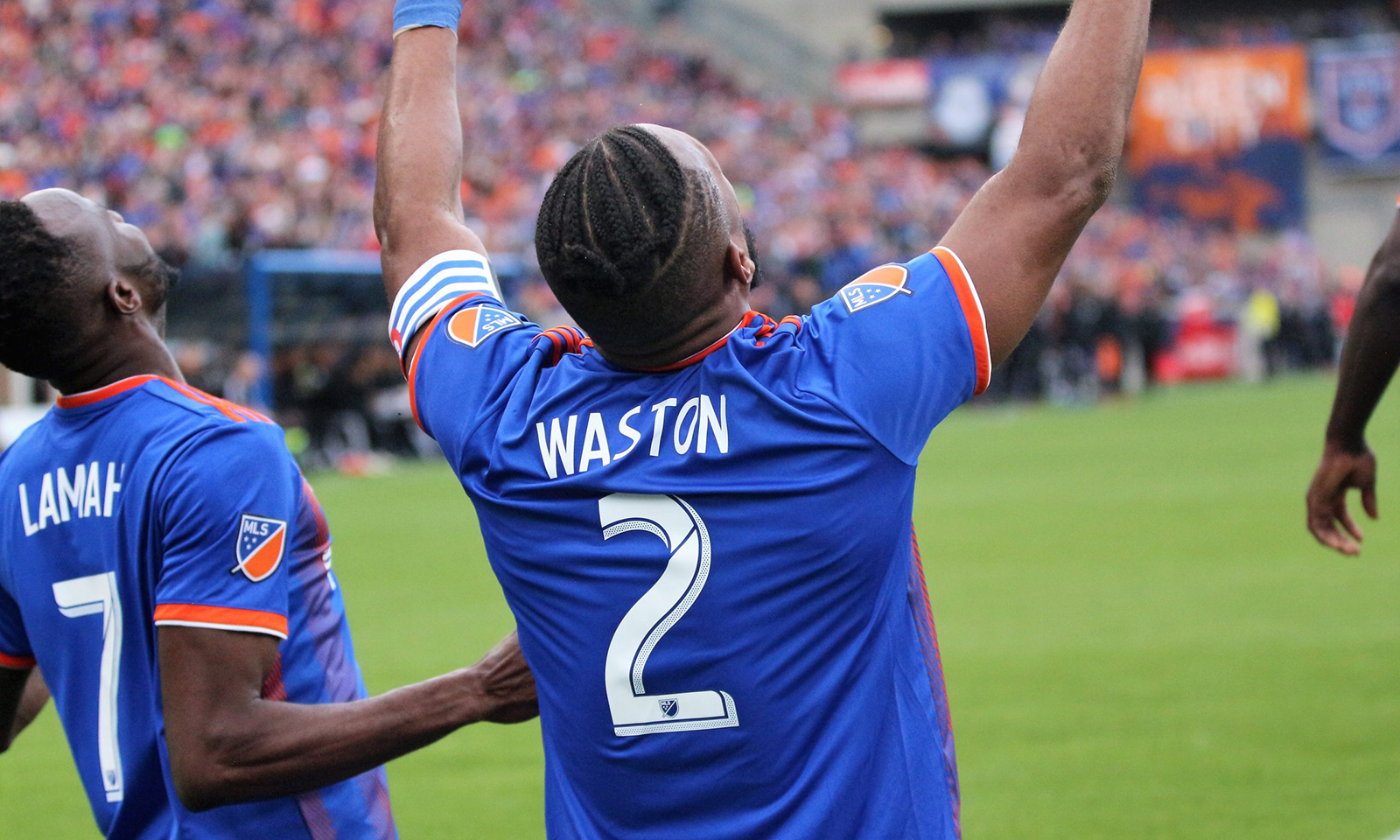 As FC Cincinnati’s time at its first home winds down, Rob Peirce looks at the matches played there we’ll remember the most.

As FC Cincinnati winds down its time at Nippert Stadium, its home since the beginning of its USL days in 2016, Cincinnati Soccer Talk will be bringing you some highlights of the five seasons the club played at Nippert. On Thursday we looked back at the best goals scored at Nippert by an FC Cincinnati player. Today we look at the Nippert matches we’ll remember most, for a variety of reasons. In each scoreline is a link to the CST match report if you want to relive the experience a little more.

This is how it all began. FC Cincinnati introduced itself to the rest of the city in its first home match. It’s safe to say no one knew what to expect going in — the players, the front office, the ticket staff or the fans. The club gave the 14,568 in attendance plenty to cheer about. Sean Okoli scored on a scissor kick in the fifth minute, and Cincinnati native Austin Berry launched a diving header in the 51st minute in what turned out to be the game-winning goal. And thus a love affair between soccer-hungry fans and their brand new local side was born. 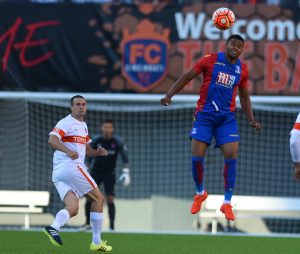 Photo Credit: Alex Vehr/Crystal Palace FC became the first European club to visit FC Cincinnati in 2016. At the time, it drew the largest crowd to see a soccer match in Ohio.

This is a match we’ll remember more for the pageantry than for the result on the field with English Premier League side Crystal Palace FC marking the first European club to come to Cincinnati for a friendly. The Eagles were fresh off their 2016 FA Cup final appearance and ramping up for the 2016-17 EPL season. The match was a testament to how much and how quickly the city embraced its new club, with then-Crystal Palace manager Alan Pardew paying FC Cincinnati compliments on the atmosphere with a crowd of 35,061, at the time the largest audience to see a soccer match in Ohio.

On the pitch, Crystal Palace scored courtesy of Jordan Mutch and Wilfried Zaha. FC Cincinnati held its own with Omar Cummings nearly scoring before halftime and goalkeeper Dan Williams denying Andros Townsend with a highlight-reel save.

FC Cincinnati played well enough in its inaugural USL season to earn a home game in the quarterfinal round of the playoffs. Eric Stevenson gave the club and those in attendance some early fireworks with a long-range cracker in the 19th minute. But the lead did not hold. Chris Tsonis equalized for Charleston right before halftime, and Zach Prince scoring on a corner kick in the 65th minute.

When FC Cincinnati and Louisville City meet in a Dirty River Derby, play can get heated quickly, and this match, forever known as Bitegate, was no exception. There were 30 fouls in this derby, along with five yellows and one straight red — issued to Djiby in the 87th minute for a two-footed, studs up challenge. In the aftermath, Louisville coach James O’Connor, not afraid to make allegations in this rivalry, claimed Djiby bit Niall McCabe in the head. USL officials sided with Louisville and suspended Djiby for an additional five matches. As it turned out, Djiby was quite useful in the U.S. Open Cup.

With FC Cincinnati continuing to advance in the 2017 U.S. Open Cup, fans pondered a potential meeting with in-state rivals Columbus Crew SC. The draw for the fourth round granted that wish, with the match to be played at Nippert. It quickly became known as the Hell is Real Derby, and anticipation for the match hit fever pitch. Djiby floated in a header in the 64th minute for the club’s first victory against an MLS side as the Orange and Blue began to turn heads. 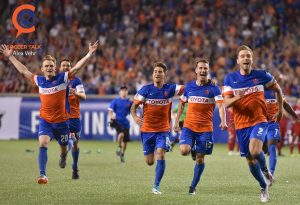 Photo Credit: Alex Vehr/FC Cincinnati knocked off the Chicago Fire in penalty kicks to advance in the 2017 U.S. Open Cup.

After beating the Crew, FC Cincinnati advanced to the USOC Round of 16 and drew another MLS side, the Chicago Fire, also at Nippert. Armed with decorated European superstar Bastian Schweinsteiger, the Fire entered the match as the hottest club in MLS. And FC Cincinnati went toe-to-toe with them. Scoreless through 90 minutes, the drama skyrocketed in extra time as the two sides traded blows. Andrew Wiedeman took a pass from Corben Bone and tucked it inside the far post for a goal in the 109th minute. Or so everyone thought — Wiedeman was ruled offside. On the defensive end, goalkeeper Mitch Hildebrandt turned away several key shots. The match, fittingly, went to penalty kicks, where Hildebrandt blocked two Fire attempts with the “Mitch says no” chorus crescendoing before Hildebrandt blocked a third to seal it. Nippert very possibly shook at the end of this match. 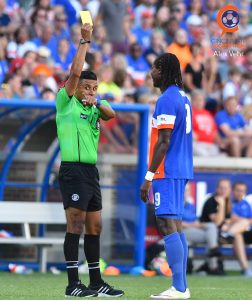 Photo Credit: Alex Vehr/There were 35 fouls, seven yellow cards and three red cards in this match between FC Cincinnati and the Rochester Rhinos.

Bill Wolf’s match report scoreline perfectly captured the scene in this one: Guido 1, Soccer 0. What started as a fairly normal half-hour of soccer with FC Cincinnati and the Rochester Rhinos level at 1-1 came unhinged quickly in what will forever be known as the Guido Game. Referee Guido Gonzalez Jr. called 35 fouls and issued seven yellow cards and three reds. Djiby received a second yellow on a challenge of Rochester’s Wal Fall. Fall earned an Academy Award selling how much pain he was in but somehow managed to stay in the game — soundly booed by the Nippert audience every time he touched the ball from there on out.

As Bill put it in the match report, “It’s tough to call the second half anything but a carnival.” Gonzalez awarded three penalty kicks in an eight-minute span, with Fall converting two and FC Cincinnati’s Danni Konig one, for a 3-2 Rochester advantage. FC Cincinnati’s second penalty was a phantom handball on Kevin Schindler — the ball actually hit his chest — in the 81st minute, and backup goalkeeper Dallas Jaye and assistant coach Yoann Damet were sent off in protest. 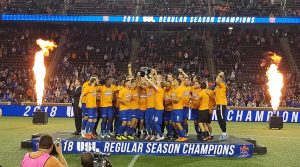 This match was just a prelude to what came afterward — FC Cincinnati hoisting its first trophy. The club had secured the 2018 USL Supporters Shield three days prior with a win at Richmond and returned home to lift the trophy and celebrate in front of a strong crowd in the last home game of the regular season. But first there was a match to be played.

Coach Alan Koch recognized it was difficult for his team to find the energy on the pitch after spending so much of it in Richmond, but Fanendo Adi and Konig scored for the Orange and Blue, and Evan Newton fittingly kept a clean sheet. Afterward it was time to celebrate, with the Bailey serenading the players, a rousing speech from club president Jeff Berding and a victory lap with the trophy.

The Bailey greets the club with Campeones chant pic.twitter.com/Wt9YTNd686

FC Cincinnati and Nashville SC played to three regular-season draws in 2018, and things were no different in the USL quarterfinal round. Scoreless in regulation, Bone gave the Orange and Blue the lead in the 95th minute, but Bradley Bourgeois equalized in the 115th, setting the stage for penalty kicks. On cue, the wind started swirling, knocking the ball off the penalty spot. The two sides traded successful penalties until Nashville’s Justin Davis sent his over goal, starting a brief premature celebration. Kenney Walker still needed to convert his penalty — and he calmly did, advancing FC Cincinnati in the playoffs for the first time.

On May 29, 2018, MLS welcomed FC Cincinnati as its newest expansion team. In this match, the club flipped the script and welcomed MLS to Cincinnati. The city reveled in the national spotlight shining bright on Nippert with a march featuring footage that shot around the world, and a sound thumping of the Portland Timbers with goals from Kendall Waston, Mathieu Deplagne and a highlight reel backheel from Alan Cruz.