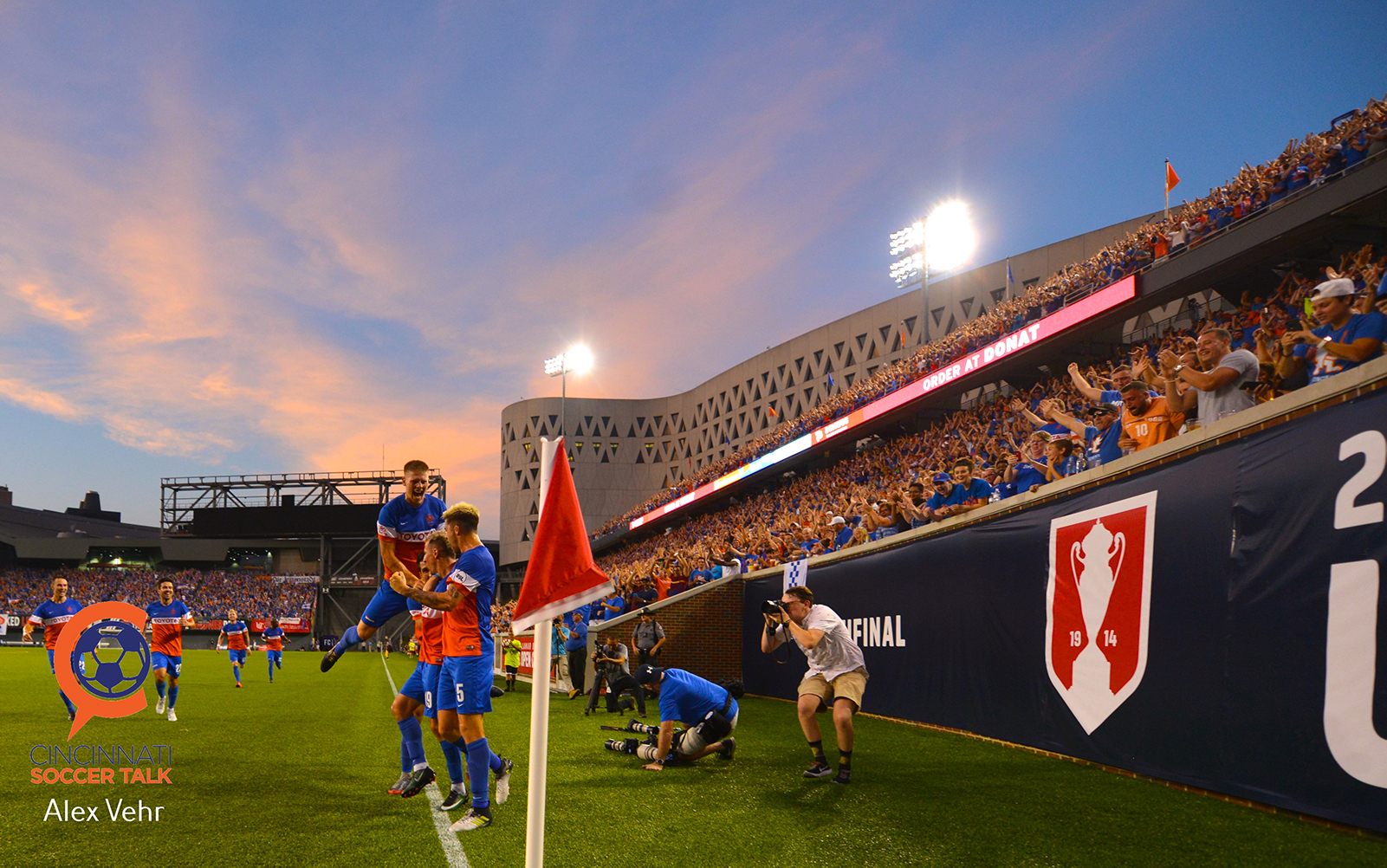 As FC Cincinnati’s time winds down at Nippert Stadium, Rob Peirce looks back at 10 goals scored at Nippert that fans will remember.

As FC Cincinnati winds down its time at Nippert Stadium, its home since the beginning of its USL days in 2016, Cincinnati Soccer Talk will be bringing you some highlights of the five seasons the club played at Nippert. Today we’ll look at the best goals scored at Nippert by an FC Cincinnati player. We’ll follow that up on Friday with the FC Cincinnati matches at Nippert we’ll remember most — for a variety of reasons.

FC Cincinnati striker Sean Okoli welcomed those in attendance at the club’s first home game to a spectacular scissor-kick goal in the fifth minute. Okoli netted several more goals en route to an MVP trophy but none more dazzling than the club’s first goal at Nippert, which landed on ESPN’s top 10 plays of the day.

Just 19 minutes into FC Cincinnati’s first home playoff game against the Charleston Battery, Eric Stevenson launched a cracker into the top right corner, sending the Nippert crowd into a frenzy. Charleston came back to win the game, but it was arguably the club’s most electric moment to that point.

FC Cincinnati started its 2017 home schedule with fireworks courtesy of Djiby. The new striker scored with his head, his left foot, his right foot and his head again in less than 30 minutes time in a rout of St Louis.

Before FC Cincinnati took down the Crew and the Fire in the 2017 U.S. Open Cup, there was a tense early-round match at Nippert against AFC Cleveland. The Orange and Blue battered Cleveland with 44 shots, but it wasn’t until a Djiby header just moments away from penalty kicks in the 117th minute that fans could breathe easy.

In the first Hell is Real Derby between FC Cincinnati and Interstate 71 rivals Columbus Crew SC, Djiby floated in a header in the 64th minute to advance the Orange and Blue in the USOC for their first victory over an MLS side.

🗣️"There it is! The hometown hero!"

Facing its third MLS opponent at Nippert in the USOC semifinals, Cincinnati’s own Austin Berry slammed home a header off a corner kick from Kenney Walker in the 62nd minute to give FC Cincinnati a 2-0 lead over the New York Red Bulls. The Red Bulls came back to win in extra time to end the cup run, but for a little while, Goliath’s slingshot seemed mighty indeed.

Harrison Delbridge was known for his work on FC Cincinnati’s back line, but on this night in the 67th minute, he was on the attack, launching a shot from outside the penalty box and into the upper right corner of goal against the New York Red Bulls II.

Emmanuel Ledesma scored countless eye-popping goals for FC Cincinnati in his 2018 USL MVP campaign, but this one at Nippert takes the cake. In the eighth minute against Richmond, Ledesma found himself unguarded near the left touchline.He launched a shot that hit the top post and caromed in, with nothing the Kickers keeper could do about it.

Before his tumultuous 2019 season, there was a lot of excitement about the arrival of Fanendo Adi, FC Cincinnati’s first designated player. As the Orange and Blue steamrolled through the 2018 USL season on their way to the Supporters Shield, qualifying for the playoffs was a mere formality. But Adi’s game-winner, sealing that playoff spot, provided some late fireworks after the club climbed back from a 1-0 deficit.

Allan Cruz’s cheeky backheel has won @mls’ Goal of the Week! Thank you, fans, for voting and felicitaciones, Allan! #FCCincy

The national spotlight beamed into Nippert for FC Cincinnati’s first MLS home game against the Portland Timbers. After Kendall Waston headed in a free kick early on, a Roland Lamah through ball found Allan Cruz in the 61st minute. Cruz, with his back toward goal, deftly flicked it inside the far post for a 2-0 lead in a game most FC Cincinnati fans will remember for a long time.