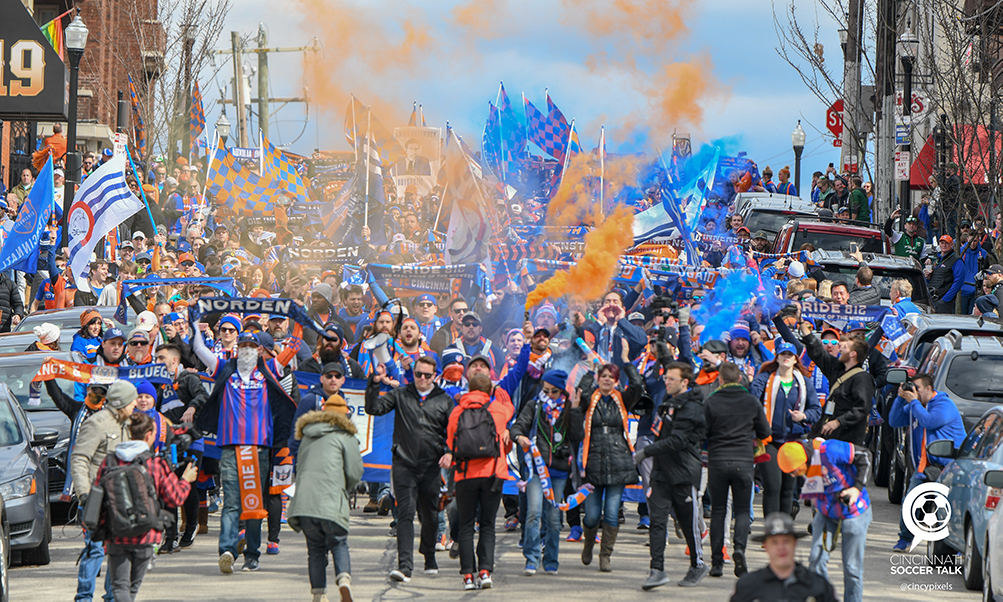 Video of the supporters march to FC Cincinnati’s first MLS home match Sunday at Nippert Stadium quickly went viral. The club and its fans celebrated the soccer holiday, ending in a 3-0 victory over the Portland Timbers.

By now if you weren’t in the middle of it, you’ve seen footage of the march. The photos and videos, like this one gone viral across the country and surely by now overseas, taken by Cincinnati Soccer Talk’s own Ken Hoetker. A sea of orange and blue cascading for what looks like miles down Charlton Street, across Jefferson and up the hill to rally at the Bearcat statue before making a grand entrance inside Nippert Stadium.

The national soccer spotlight beamed into Nippert and the Clifton neighborhood on Sunday for FC Cincinnati’s first home match as an MLS side. And as often happens in Cincinnati, the club’s supporters revelled in the occasion. Sunday was a soccer holiday here in Cincinnati, and the city got to celebrate with its club. The Orange and Blue on the pitch did their part, steamrolling to a 3-0 victory over the defending Western Conference champion Portland Timbers.

The club continued its exponential growth from the 4-1 loss in Seattle. I asked FC Cincinnati coach Alan Koch if the days leading up to the home opener were a distraction. True to form, Koch said they were not.

“For our club and the people here in this community it might have been because it was the first home game,” Koch said. “But for our group, this was our third game. So we’ve prepared for three games already. It wasn’t really any different other than it was nice not being on the road.”

His players did get to bask in Nippert’s glow, however. More than one labeled the crowd the 12th man after the match. And though he was all business during the match, defender and Cincinnati native Nick Hagglund made it a point to take in the atmosphere for a moment before and after.

Last May, FC Cincinnati fans kicked down the door into MLS with a voice the league could not ignore. At Nippert’s first MLS home match on Sunday, fans burst through that door and proclaimed their presence. A few weeks ago, fans in Seattle welcomed Cincinnati to MLS. On Sunday, the city flipped the script. The announcement from Nippert was this: “MLS, welcome to Cincinnati.”

Garber spoke with the Cincinnati media contingent at halftime on Sunday and conceded FC Cincinnati was not on his radar when the club began USL play in 2016.

“I never really thought of Cincinnati as a real soccer city,” he said.

Garber came to a rally in November of that year, his first visit to the city. While the expansion movement had been in full earnest in Cincinnati for awhile by then, Garber said it was seeing Nippert firsthand during the 2017 U.S. Open Cup semifinal match against the New York Red Bulls that made him pay attention.

Sunday’s home opener was the culmination of what 12 months ago seemed to be an endless process to get into MLS. The celebration drew media from overseas.

Between interviews in the FC Cincinnati locker room, I chatted for a second with a reporter from the BBC who came across the pond to cover the match. I asked her if she got to go to any of the pregame spots. She told me she did and had never seen anything like the march. She said in England, supporters just have a pint at their local pub and then casually go to the stadium.

Sunday marked only the second time Garber took part in one of his club’s marches. The first was before a Seattle Sounders match.

“I vowed I would never do that again,” Garber said. “I say that with a smile because there’s an energy in those marches, and it’s not about the guys in the suits. It really is about them (supporters) showing their pride in their club and in their city and in their colors.”

Soccer is about more than a march, of course. It’s more than supporters filling city streets with smoke and flags. But Garber said it’s that kind of passion that provides soccer’s heartbeat and sets MLS apart from the other major professional sports leagues in the U.S.

“I think it drives our brand,” he said. “It’s not just about showing the excitement of passionate fans from an MLS perspective. It really is about them. They have the ability to wear the colors of their team and show the pride of their city, write songs, get everybody excited and celebrate in ways they can’t in other major leagues here in this country. They’re young people who are used to expressing their views. They connect with each other on social media. We allow them to bring flags and signage in assuming they are approved, and that’s unusual. They see that in the rest of the world as part of the character of the sport. And they’re watching those games on Saturday mornings and they want to be celebrating and showing that America can be like England or like Italy or like Spain. Because they’re all connected.”

Speaking of other sports, here’s something to consider. The Reds are celebrating 150 years of baseball this year. The Bengals turned 50 last year. FC Cincinnati is still in its infancy.