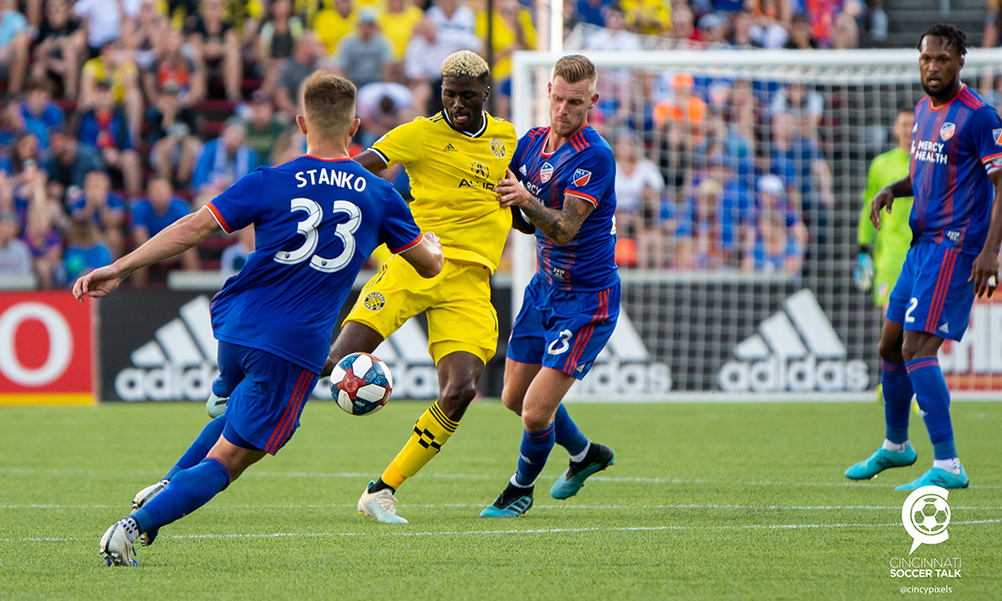 FC Cincinnati resumes its season Saturday with a Hell is Real Derby bout with the Columbus Crew to begin group play in the MLS is Back Tournament.

When last we checked in on the Hell is Real Derby, Columbus Crew SC fans chanted heartily from their upper deck perch at Nippert Stadium after a convincing victory on FC Cincinnati’s own turf. The months-long wait for the Orange and Blue’s chance to rinse that sour taste from their mouths is finally over, though the circumstances are decidedly different.

Each Hell is Real iteration has been memorable, from the 2017 U.S. Open Cup bout to the thriller at MAPFRE Stadium last summer to the Crew thumping just days later at Nippert.

This renewal will also be one to remember. Saturday’s 10:30 p.m. kickoff in Orlando, Florida, will be broadcast nationally on FS1. But there are two firsts — a neutral site and no fans. It’s the start of Matchday 1 of Group E in the MLS is Back Tournament, a World Cup-style event that brings the league back from its four-month COVID-19 suspension.

FC Cincinnati (0-2-0, 0 points) and Columbus (1-0-1, 4 points) are grouped with Atlanta United and the New York Red Bulls. Points earned during the three group matches count toward the regular-season standings. The tournament winner gets a berth in next year’s Concacaf Champions League and prize money. Regular-season play will continue after the tournament finishes.

Each team can field a matchday roster of up to 23 players, an increase from the usual 18, and can make up to five substitutions during play.

The tournament is not the only unusual storyline in this Hell is Real chapter. Jaap Stam makes his FC Cincinnati coaching debut against the Crew, only 11 months after former coach Ron Jans did the same in Columbus.

Former FC Cincinnati striker and designated player Fanendo Adi did not get to play against the Crew last year. After a turbulent 2019 season with the Orange and Blue, Adi moved up Interstate 71 and is now with the Crew. Adi has made the matchday squad twice with Columbus and subbed on for Gyasi Zardes in the club’s season opener back in March. Derrick Etienne Jr., loaned to FC Cincinnati last year, is also with Columbus.

FC Cincinnati has question marks about the status of Adi’s replacement as the DP striker, Jurgen Locadia. In a team-provided interview on Monday, Stam said Locadia suffered a recent thigh injury. In addition, Locadia was late arriving with the club and had not been participating in full workout sessions. Stam said Locadia’s status is day-to-day.

FC Cincinnati started the season back in March with comeback efforts that fell short at the Red Bulls and at Atlanta United. Columbus opened with a 1-0 victory against New York City FC and a 1-1 draw at Seattle. Lucas Zelarayan and Zardes have a goal each for the Crew.

While Locadia is FC Cincinnati’s key offseason addition, Zelarayan is the same for the Crew. Zelarayan comes to Columbus after 23 goals and 14 assists in 139 appearances across all competitions for Liga MX side Tigres UANL from 2016-2019. Tigres reached the Concacaf Champions League final in three of the last four seasons and won three straight Campeon de Campeones trophies.

Here are some things to watch for in this version of Hell is Real:

■ What will FC Cincinnati look like under Stam in this kind of format? Will Stam want to possess and be attack-minded in the 4-3-3 system? Or will he want to sit back, bunker and defend? Will rust be a factor after a four-month layoff?

■ Will Locadia, fresh off his loan extension, play? If he does, how effective will he be? If he doesn’t, expect to see Brandon Vazquez start as the primary striker or perhaps Yuya Kubo slide over from the wing.

■ How does Siem de Jong fit into the attack? We’ve yet to see him in action, but it’s been fun picturing him alongside Locadia and Kubo in the final third.

■ Will this derby have a moment? From Djiby’s floating header to Przemyslaw Tyton standing on his head late to Zardes’ brace, there have been some defining snippets in this rivalry.