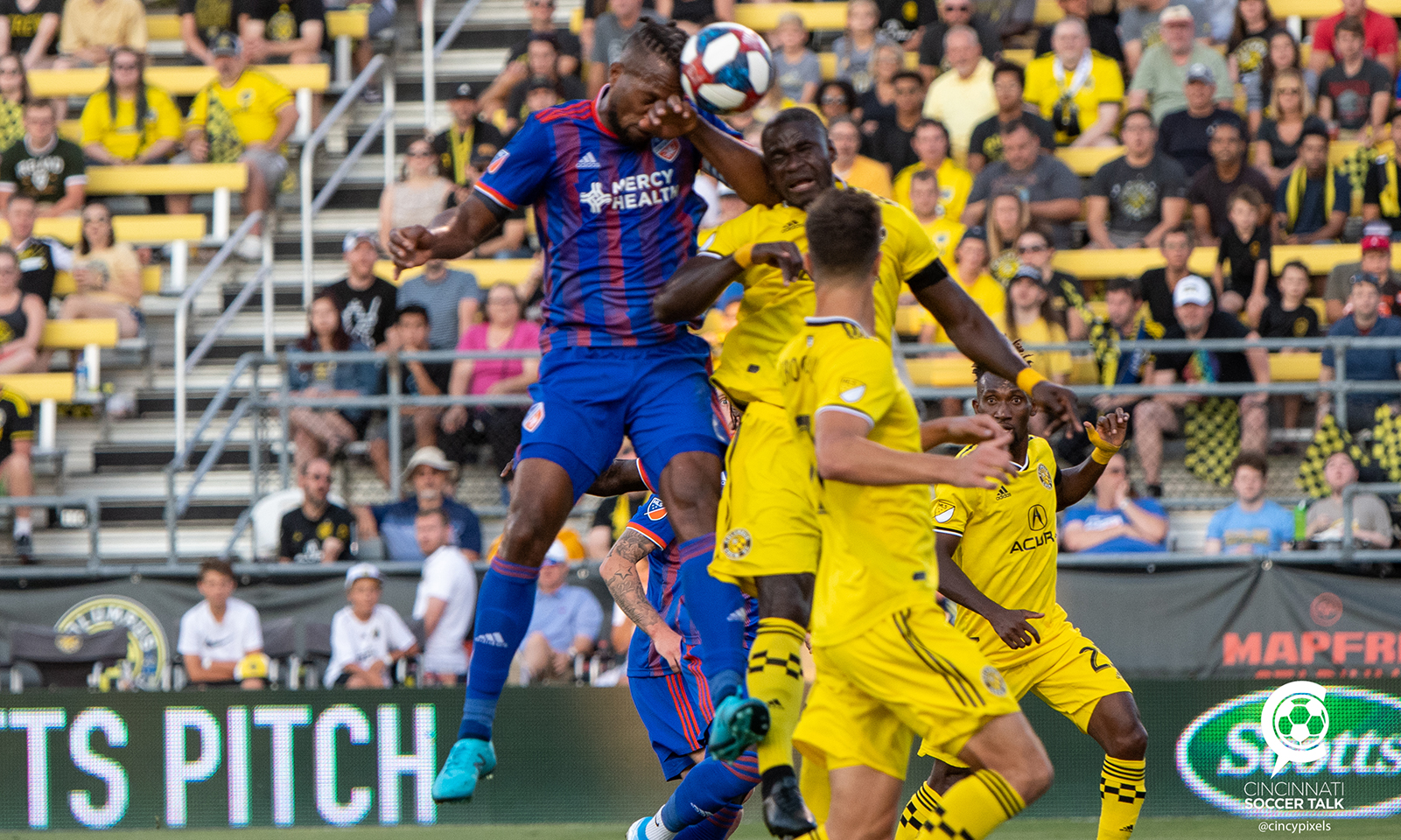 Gyasi Zardes skied his sitter in the 90th minute, but that was just the beginning of Columbus Crew SC’s late onslaught. Another shot hit the bar, and Tyton made two critical saves in the ninth and 10th minute of stoppage time as FC Cincinnati stood tall to earn a 2-2 draw in the first MLS version of the Hell is Real Derby on Saturday. The result snaps a four-match losing streak and christens the Ron Jans era as the club’s head coach.

“Honestly I didn’t watch what happened after my back,” Tyton said. “I just looked at the (Crew) supporters. Are they celebrating or not? They didn’t celebrate, so I was happy. I turn and I see Kendall (Waston, who came sprinting back to defend) in the goal. I am happy that he missed his chance. That was 100% chance.

“The last minute was crazy. So many actions, so many chances for Columbus. We survived — I don’t know how. But we get the point, and we have to be happy.”

The Crew had rallied from an early 2-0 deficit and had all the momentum at the end in an attempt to take all three points in front of their home crowd.

“We got a result,” Jans said. “In the end, I think we were more lucky with the point than Columbus was. The first 35 minutes I think we were the better team, leading 2-0. They got a little bit of an easy penalty I think, but after that we had a lot of problems getting to halftime. In the end, in the last 10 minutes they hit the bar twice. So I don’t think we deserved to win, but I’m really happy with the point.”

“It was a very nice atmosphere that the fans create,” Tyton said. “There was drama, there were goals, cards, fights, everything.”

Jans had his club step on the gas early, using a high press. New left back Andrew Gutman made his first start and was active on both ends.

FC Cincinnati got on the board in the 16th minute when Darren Mattocks headed home a Victor Ulloa corner kick that left Crew goalkeeper Eloy Room flat-footed.

“We practiced that set piece all week, four guys line up in a train and then speed off,” Mattocks said. “I jumped so high that I think I had to duck a little bit to get it there, but thankfully it went in.”

Then in the 23rd minute, a Roland Lamah cross filtered through to Emmanuel Ledesma at the top of the 6-yard box. Ledesma slotted it inside the far post to give FC Cincinnati a 2-0 lead. It’s just the seventh time this season the club has scored multiple goals.

The Crew pulled one back right before halftime. Maikel van der Werff was called for a soft foul on Zardes inside the penalty box. Zardes converted the penalty kick with Tyton diving to his left and Zardes shooting the other way.

“It was a little push from van der Werff,” Jans said. “OK, you can give a penalty, but I think most referees will not give it. That was very important. It gave them a boost, and we were all over the place the last few minutes before halftime”

FC Cincinnati’s intensity dropped off a touch in the second half, and the Crew leveled the match at 2-2 on a 30-yard screamer from Pedro Santos.

Jans introduced the club’s two newest additions, Joseph-Claude Gyau and Derrick Etienne Jr., together in the 63rd and 64th minutes to add a burst of speed.

“I think it was fatigue maybe,” Jans said of the difference in the halves. “We were pressing so much. We were getting the ball so many times, it cost a lot of energy. In this weather, it’s sometimes difficult.”

Then the cards came out.

Santos earned a yellow after pulling down Mathieu Deplagne in the 68th minute. And in second-half stoppage time, Ulloa and Allan Cruz were carded for trying to bring down David Accam. Ulloa received five stitches near his left eye from a knock in the incident.

That allowed for additional stoppage time, setting up Tyton’s massive saves. He had four on the night, and the Crew totalled 19 shots to FC Cincinnati’s seven.

“I really liked the atmosphere, the intensity,” Jans said. “I’d like to have some more derbies. In two weeks, we’ll have one more against the same opponent. I liked it. I liked it a lot.”