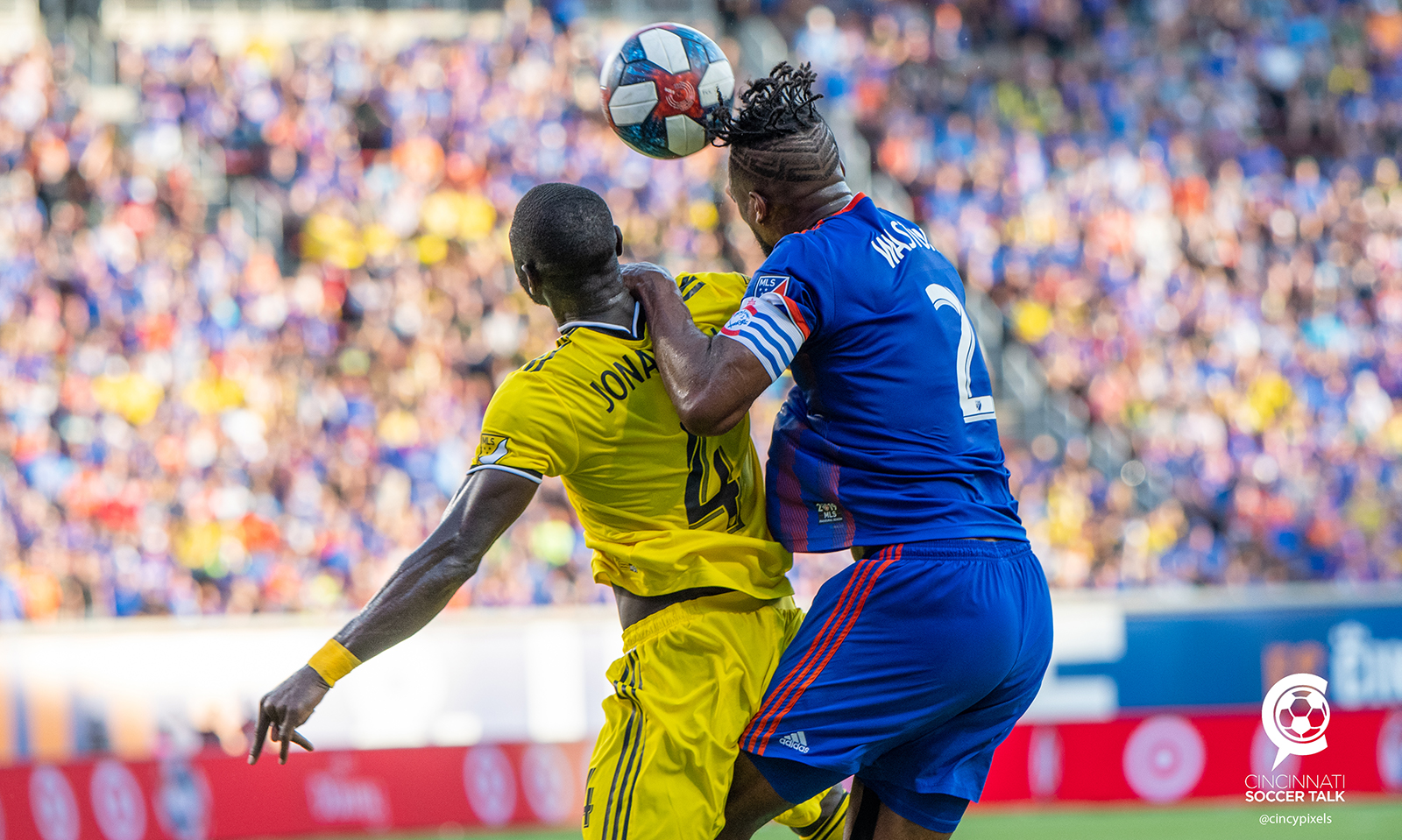 Gyasi Zardes and Columbus Crew SC stole the show Sunday at Nippert Stadium with a 3-1 victory over FC Cincinnati in the Hell is Real Derby.

With a shot at the playoffs in the rearview mirror, FC Cincinnati fans had one date left circled on their calendar as a remaining highlight in the club’s inaugural MLS season — the home leg of the Hell is Real Derby against Columbus Crew SC.

Turns out, it wasn’t much of a highlight.

Two weeks after the sides played to a draw in Columbus, the Crew stole the show Sunday in front of 30,611 at Nippert Stadium. Gyasi Zardes notched a brace in the first 33 minutes en route to a 3-1 Columbus victory, its first derby win in the series.

“In the first half, I didn’t see a team,” FC Cincinnati coach Ron Jans said. “I didn’t see players doing the game plan, and I don’t know why. In the second half, we did much more of the building up, better in possession, creating chances.

“What’s most important — they killed the game. They did a great job, Columbus, in the first half. We had trouble with winning the ball, putting the right pressure and with the speed of the attackers.”

FC Cincinnati remains cemented in 12th place in the East with 18 points (5-19-3). The club is winless in its last seven and last won at home on July 6 against Houston.

Columbus (8-15-6) stays in 11th but creeps a little closer to the playoff line with 30 points, just seven behind seventh-place Toronto FC.

As in Columbus, FC Cincinnati began with a high press with the Crew struggling to advance past midfield.

But then the Crew broke through, consistently running down their right channel and whipping crosses into Zardes. That and sloppy play in the defensive third left the feeling a Crew goal was inevitable.

That goal came in the 22nd minute on a cross from Luis Diaz to Zardes with the FC Cincinnati back line in retreat. Zardes beat Przemyslaw Tyton at the near post for a 1-0 Crew lead. In the 33rd minute, Afful played a ball over the top to Zardes, who slid between Maikel van der Werff and Mathieu Deplagne for a chip-in and a two-goal lead.

Sunday’s performance was a bit of redemption for Zardes, who skied a sitter late in Columbus two weeks ago that would have given the Crew the win.

“Zardes scored the (second) goal in the middle, but the cross into the space — we tried to play a little bit higher with (Andrew) Gutman,” Jans said. “But if we don’t press well or we lose the ball, there’s a lot of space behind him. During halftime we made a tactical change to put Victor Ulloa next to Caleb Stanko because he was too alone against two players. The second balls but also with the passing, we were in big trouble, and then they played through the right side.”

The Crew padded the lead in first-half stoppage time. Pedro Santos found Diaz down the right side. Gutman, playing on a yellow card, was in pursuit, but Diaz slotted it past Tyton inside the far post to make it 3-0.

Columbus totalled eight first-half shots, five inside the box. Five of those shots were on target, including the three goals. FC Cincinnati completed 66.5% of its 158 passes in the half.

“They punished us three times,” center back Kendall Waston said. “From there, they can be more relaxed, take care of the ball, have more confidence and we have to chase and chase and chase. We created some chances, but we didn’t score. I think that was the key of the game. In the first half, we weren’t there, we were asleep, and Columbus was ready to go. That’s why they punished us.”

FC Cincinnati had more fight in the second half — with nine shots, five on target — but it was an uphill battle at that point. Kekuta Manneh subbed on for Darren Mattocks, who was limited to just six first-half touches.

Manneh pulled one back in the 89th minute on a through ball from Emmanuel Ledesma, and immediately after, the derby boiled over with a scrum inside the Crew net. Ulloa tried to take the ball from Jonathan Mensah, leading to yellow cards for both after a VAR review.

After three matches, Jans said his approach will remain the same. He acknowledged FC Cincinnati will not make the playoffs, but “the goal is to cultivate a way of playing and to see which players fit in our future plans. I think I was patient in the first three games, but you have to do it, otherwise you are not in the plans of FC Cincinnati and in my plans.

“I like to communicate positively … with my players. I will keep doing that. But sometimes you have a very nice player that you have to tell, maybe in the end, we go on without you. And that’s also my job, part of my job, because I’m not the only one who takes the decisions.”