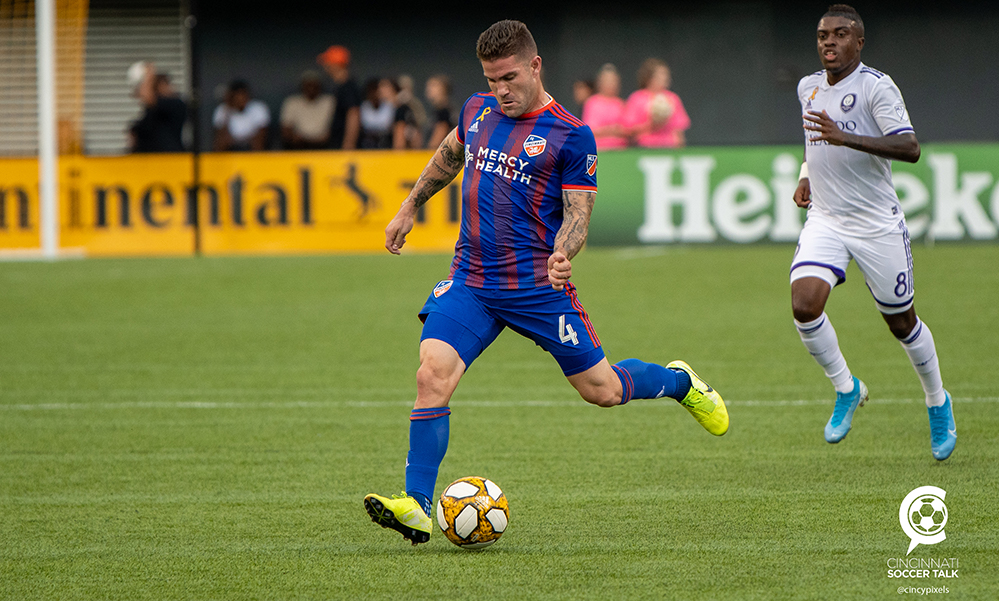 FC Cincinnati is still trying to prove a point after last year’s inaugural struggles, defender Greg Garza said on Thursday. The club has plenty to fight for as it opens MLS is Back group play Saturday in a Hell is Real Derby match with Columbus Crew SC.

When the MLS is Back Tournament first was announced, FC Cincinnati’s players chose to downplay the significance of the Orlando fixtures for their club. With only two matches played with a revamped roster and limited time to prepare under new manager Jaap Stam after a four-month layoff, it seemed premature to call this tournament a grandiose opportunity for the club. But it seems like that tone has since shifted, in favor of some swagger.

“We want to show that we have a good team, good players, that nobody can say that’s an easy three losses for Cincinnati,” midfielder Haris Medunjanin said via video conference on Thursday. “We need to fight for our pride, show that we can beat any team. We want to put Cincinnati back on the map again.”

The first opportunity to do that is a 10:30 p.m. Saturday against the Columbus Crew in what promises to be the most unusual Hell is Real Derby to date, in an ESPN Wide World of Sports Complex devoid of fans.

FCC drew Group E, alongside their Interstate 71 rivals and perennial MLS Cup contenders Atlanta United and New York Red Bulls. But Stam’s team knows these clubs well, particularly Atlanta and New York, which they faced in the first two matches of the season before the COVID-19 pandemic halted the season. It’s partly that familiarity that is responsible for FCC’s renewed confidence heading into this tournament.

FCC, under interim head coach Yoann Damet, lost 3-2 to the Red Bulls and 2-1 to Atlanta.

“One positive thing from that is we can look at the mistakes we made in those two games that we lost,” defender Greg Garza said via video conference on Thursday. “I said it after both of those games, I felt like the game could have gone either way. I felt like we were a lot closer. There are a lot of positives we can get out of playing those two games … we can study them as much as possible to be successful.”

Unfortunately, one of the players who helped keep those two matches close – Dutch forward Jurgen Locadia – is expected to miss at least one of the matches in Orlando and likely more. Locadia, who is nursing a thigh injury, is working with physios and receiving treatment daily, but there is no firm timetable for his return.

On the positive side, one player who didn’t appear in either of those first two matches – Dutch midfielder Siem de Jong – is expected to play. De Jong, along with young striker Brandon Vazquez and Japanese international Yuya Kubo, give FCC a promising attack even without Locadia.

Stam knows de Jong well. They were even teammates for a short time at Ajax.

“We know his ability,” Stam said via video conference on Thursday. “He’s got exceptional quality. He can get into certain areas. He’s got scoring ability. He’s got the ability to coach players around him. He can be very important for us.”

But before FCC can start thinking about rematches against Atlanta and the Red Bulls, they must first concentrate on getting a result against Lucas Zelarayan and the Crew.

In its inaugural MLS season in 2019, FCC came away with a 2-2 draw in Columbus while losing to the Crew 3-1 at Nippert Stadium. It won’t be anywhere near the same atmosphere in Orlando on Saturday, but Garza doesn’t believe that diminishes the importance.

“Hopefully we can have tons of people from those two cities watching the game,” Garza said. “We’re still fighting for something and trying to prove a point. I think it will still be a special game. The heart, the fight, and battle will be there from all of us.”

There won’t be many strangers on the pitch in this match. Fanendo Adi, one of the more polarizing figures in FCC’s recent history, plays for the Crew, as does Derrick Etienne Jr., who made five appearances for FCC last season. Crew coach Caleb Porter coached Garza with the under-23 U.S. men’s national team during Olympic qualifiers.

Although Medunjanin hasn’t experienced a Hell is Real Derby, he knows what it means to lace up the boots in a rivalry match.

“I experienced it in Philly against Red Bulls,” Medunjanin said. “When the whistle blows, you go for it. When you play against your rivals, you want to win. We are focused on the game. We want to prove a point.”

If FCC is going to prove its point, it will need to do it under strange circumstances, in the blazing heat of central Florida, amid a pandemic and having been isolated for weeks with teammates in the environment of the MLS’ ultra-controlled ‘bubble’.

“But the guy you’re facing in the one-v-one battles, he’s facing everything you’re facing,” Garza said. “It’s hard playing in the heat. It’s hard when we haven’t played a game in four months. Those are the circumstances we have to deal with.”

Training under Stam has been intense, according to the players. Although MLS limits the time each club has in training, the former Manchester United defender pushes his players to final whistle. That doesn’t mean that all the focus in training has been on defending, despite FCC conceding goals at a record rate last season. Stam also wants his team to get forward and attack. When he talks, players listen.

“When you have Jaap in front of you, everybody’s a little bit scared,” Medunjanin said, not the slightest bit tongue in cheek. “Everybody wants to do their best. When he says something, everybody is saying ‘yes’. Everybody’s fighting for their positions.”

No question, FCC respects Saturday’s opponent. But you get the sense that FCC’s players and technical staff are looking to earn a slice of respect for themselves during their stay in the Sunshine State.

“They’re a good team,” Stam said, of the Crew. “They have a lot of quality in their team. It will be a difficult game. But we have good players. Two clubs from the same state going for that first win, it’s going to be interesting.”