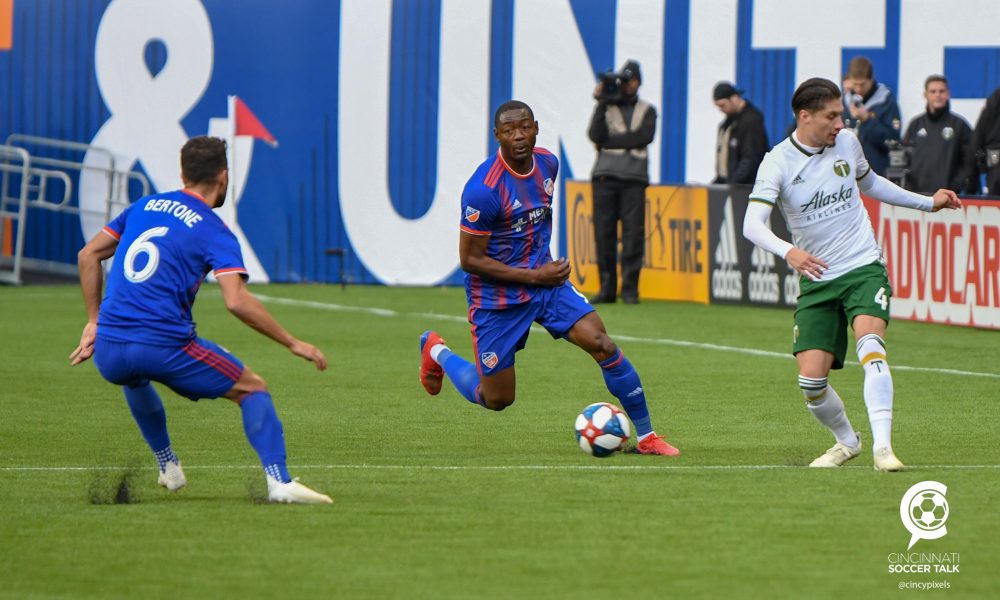 FC Cincinnati’s Fanendo Adi was charged with OVI early Sunday, according to an MLS media release issued Tuesday. Adi won’t be allowed to play or participate in team activities until he clears a league assessment.

FC Cincinnati’s first designated player, Fanendo Adi, was issued a citation by the Ohio State Highway Patrol early Sunday morning for operating a vehicle while impaired, according to an MLS media release issued on Tuesday. Adi must undergo an assessment by the MLS Substance Abuse and Behavioral Health program and will not be allowed to play or participate in team activities until he’s cleared by program doctors and MLS completes its investigation, according to the release.

Adi suffered a leg injury at the end of the first half of the March 17 home opener against the Portland Timbers. He left that match at halftime and has been sidelined from action since.

Adi was stopped for speeding, according to the release. The league will communicate with FC Cincinnati, local law enforcement and the MLS Players Association during the investigation.

“FC Cincinnati takes these matters very seriously and upon learning of the incident, immediately reached out to Major League Soccer and local authorities,” the club said in a Tuesday media release.

In addition to the SABH program assessment, “MLS will undertake an independent review of the circumstances surrounding Fanendo’s citation, working closely with the Ohio State Highway Patrol,” FC Cincinnati said in its release. “The club will have no further comment until that investigation is complete.”

In an MLS website search, the last league players to go through the SABH program were Orlando’s Cyle Larin and Vancouver’s Sheanon Williams, both in 2017. Larin was cited in June and cleared through the SABH program 12 days later. Williams was arrested and charged with assault, also in June of 2017. He was approved to return to the team 14 days afterward.

According to a portion of the MLS constitution found on a congressional website, discipline for SABH violations depend on whether the player is required to enter the treatment phase of the program. This can happen if there’s reason to believe the player’s conduct is related to a behavorial health problem. This determination is made at the discretion of SABH program professionals.

Players not in the treatment phase who violate SABH policy for non-performance enhancing substances may be disciplined for just cause pursuant to the MLS collective bargaining agreement, according to the league constitution.

For the treatment phase, a player with a verified positive for a non-performance enhancing substance is placed in Stage One classification, according to the league constitution. That player will continue to earn his full MLS salary and have no penalty imposed as long as he complies with his prescribed treatment and aftercare program.

If the player does not fully comply with the treatment and program, he can advance to Stage Two and be fined and suspended with or without pay, according to the league constitution. If the player is suspended, he becomes eligible for reinstatement upon the recommendation of SABH program professionals after consultation with the commissioner or a designee. Reinstatement is not guaranteed.

Refusal to participate in the SABH program can lead to a fine, suspension or terminate of his standard player agreement, according to the league constitution.