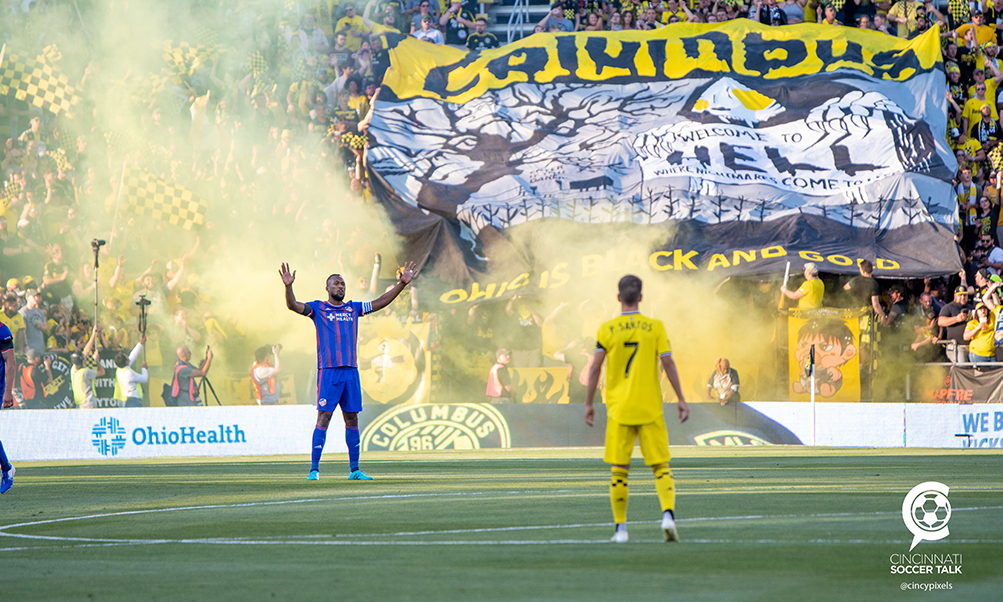 FC Cincinnati showed hints of new head coach Ron Jans’ style in Saturday’s 2-2 draw in the Hell is Real Derby. Jans used a high press to start the match, and the first goal came on a set piece the club worked on in training.

COLUMBUS — FC Cincinnati fans waited a long time for Saturday’s Hell is Real Derby bout at MAPFRE Stadium. The 2-2 draw certainly lived up to the billing and — like the first derby in the 2017 U.S. Open Cup — is a match not to be forgotten anytime soon.

There was plenty of high drama. The soft penalty on Maikel van der Werff comes to mind. So to do the strikes by Emmanuel Ledesma and Pedro Santos, the 10 minutes of second-half stoppage time and Przemysław Tytoń’s clutch saves at the end.

But underneath that was the beginning of the Ron Jans era as head coach of the club. Jans stomped on the gas to start the match, employing a high press for the first half hour or so.

“His philosophy and what he’s trying to create, we can see it already,” forward Darren Mattocks said. “He likes the high press, he likes to play. We did a really good job in the first 30-35 minutes. It was always going to be tough to sustain for 90 minutes, especially playing on the road in a rivalry game, but definitely something to look for in the weeks coming.”

Mattocks got FC Cincinnati on the board in the 16th minute, scoring on a corner from Victor Ulloa.

It was a play the Orange and Blue worked on in training last week. Kendall Waston, Mattocks, Maikel van der Werff and Mathieu Delagne stood in a line above the penalty spot. They broke together and spread, and Ulloa found Mattocks. The ball struck him near his right shoulder blade.

“We practiced some things,” Jans said of his first week at the reins. “Pressing the goal kick, the high press. The first 35 minutes, we did really well. We scored out of a set piece that we practiced. That’s really one of the best things that can happen to you. We couldn’t keep up the level the whole 90 minutes. I knew beforehand that we have to do a lot of work. For now, there’s a lot of good things — positive things — about this match. You can mention some individual players, but most of all we played like a team. We had a lot of fighting spirit, and that’s why I’m happy with a point.”

Jans wasn’t the only new piece FC Cincinnati added last week. Andrew Gutman, on loan from Celtic FC, made his first start at left back, sending Deplagne back to his more natural position of right back.

Gutman was active on both ends of the pitch and logged a full shift. He often advanced forward in attack, disrupting the Crew defense with his passing. He completed 85% of his passes, including 14 out of 14 in the first half.

He nearly made it a 3-1 game in the 49th minute, but the timing wasn’t quite right on a cross from Mattocks. Then in the following sequence, he made a nice stop on the defensive end.

“I thought I did well,” Gutman said. “Kendall and Maikel helped me a lot just with confidence and making sure I was in the right positions. Obviously I could clean up a couple parts of the game, but overall it was good.

“I think when I was coming here, everyone kind of knew a lot of my game was to get forward, and they gave me the freedom to do that, within reason. They covered me well when I was out of position. I pick and choose when to get forward. I wasn’t just going forward 100% of the time.”

Jans conceded the early press cost his side some energy in the second half. There could be some fine tuning in the coming weeks, tinkering with when to press, for how long and how hard.

As the club tired from the early exertion, Jans brought on new additions Joseph-Claude Gyau and Derrick Etienne Jr. to play on the wings.

Jans might also have a question to answer at goalkeeper once Spencer Richey recovers from his back injury. Tytoń performed admirably for the club, making two massive saves in the ninth and 10th minutes of stoppage time to seal the result.

“Sometimes you need goalkeepers to win a point,” Jans said. “He can have that compliment.”

It’s a lot of new parts and it will take some adjusting to fine-tune everything, but there were certainly hints of the style Jans plans on using. It will be interesting to see what develops in the final nine matches.

“This gives new energy to the team,” Jans said. “For us, you can see in those nine matches that we develop a way of playing. I think Yoann (Damet) did a good job (as interim coach), but we want to improve even more. We’ve got some fresh new players also. Improvement of results, improvement of the way we’re playing. But for me most of all is where you are part of this family, this team, this staff, this squad, you have to do everything to give everything every day, every second, fight for every inch and do it together. And that’s what I saw (Saturday).”

Tytoń confessed after the match that he didn’t know the significance behind the Hell is Real name. After he learned of the billboard halfway between Cincinnati and Columbus on Interstate 71 and the meaning of the phrase, he said Saturday’s match was fitting as a derby.

“It was a very nice atmosphere that the fans create,” Tytoń said. “There was drama, there were goals, cards, fights, everything.”