Brad Gough breaks down the goals scored in Saturday’s Hell is Real Derby in this week’s version of How They Happened.

The first-ever regular season Hell is Real Derby ended in a 2-2 draw. Though the result is an improvement over the recent four-game losing streak, it can also be viewed as a disappointment after FC Cincinnati got out to a 2-0 start. Here’s a look at how all the goals happened.

Darren Mattocks’s third goal of the season came off a corner kick in the 16th minute. FCC started in a bunched formation, with Kendall Waston, Mattocks, Maikel van der Werff, and Mathieu Deplagne standing close together, then making relatively straight runs into the box. 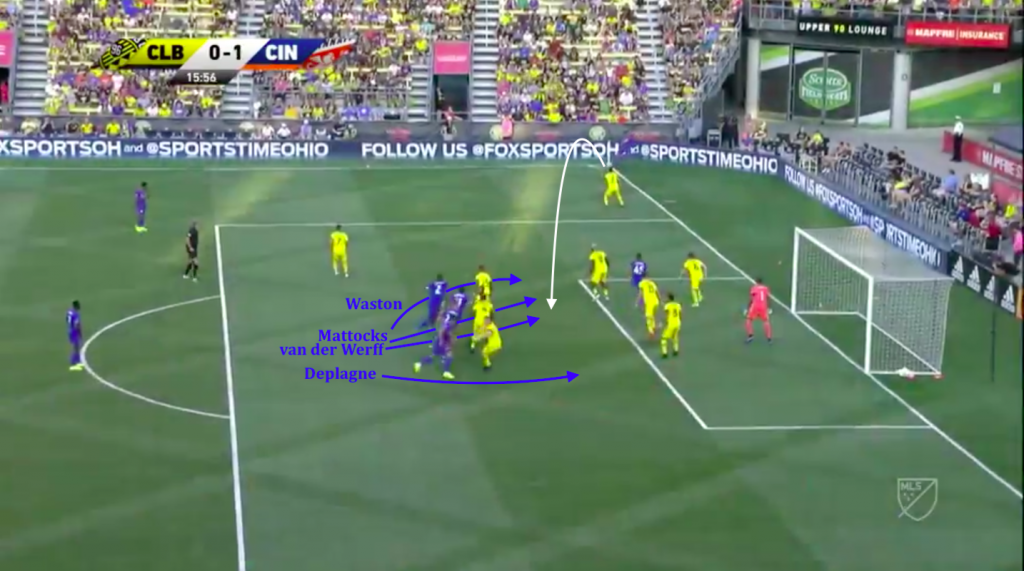 The Columbus Crew had four players matched up on the four FCC runners. However, the crew defended in a hybrid man-to-man/zonal marking system. This meant that Luis Diaz and Connor Maloney were responsible for tracking any runners that made near and far post runs, while players making central runs were to be picked up by Alex Crognale (orange zone below), and Artur (yellow zone below). 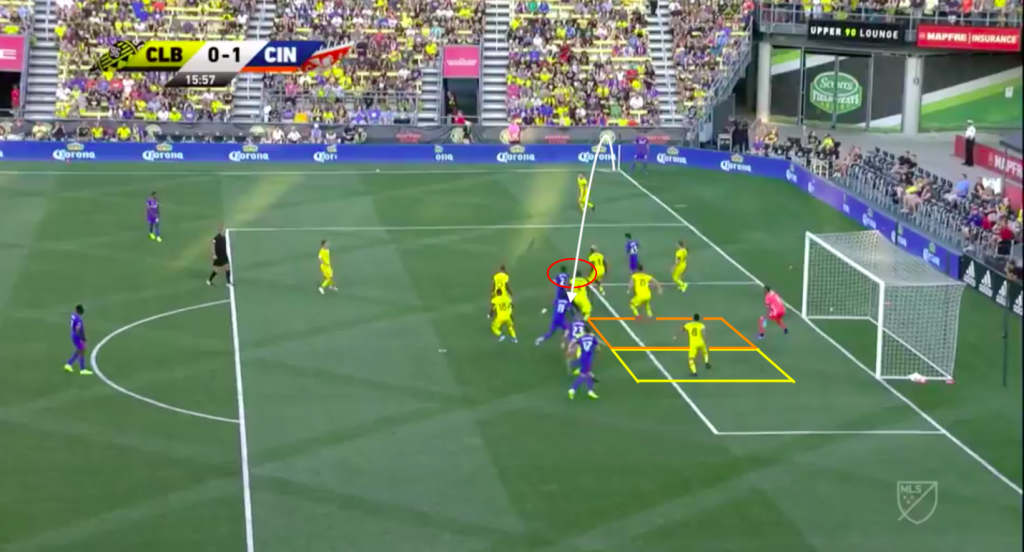 Waston made a near post run and was tracked appropriately by Diaz. Crognale incorrectly moved to the front part of his zone to challenge Waston, allowing Mattocks to remain unmarked in the center of the box. The Jamaican forward had lots of space between defenders to leap and meet Victor Ulloa’s well-struck corner kick.

FCC’s second tally of the match resulted from a great, curling cross struck low and hard by Roland Lamah. The move began with Mattocks (blue circle below) moving into an offside position. This is a tactic employed by many forwards that forces defenders to try to predict where and when the player will move back onside. 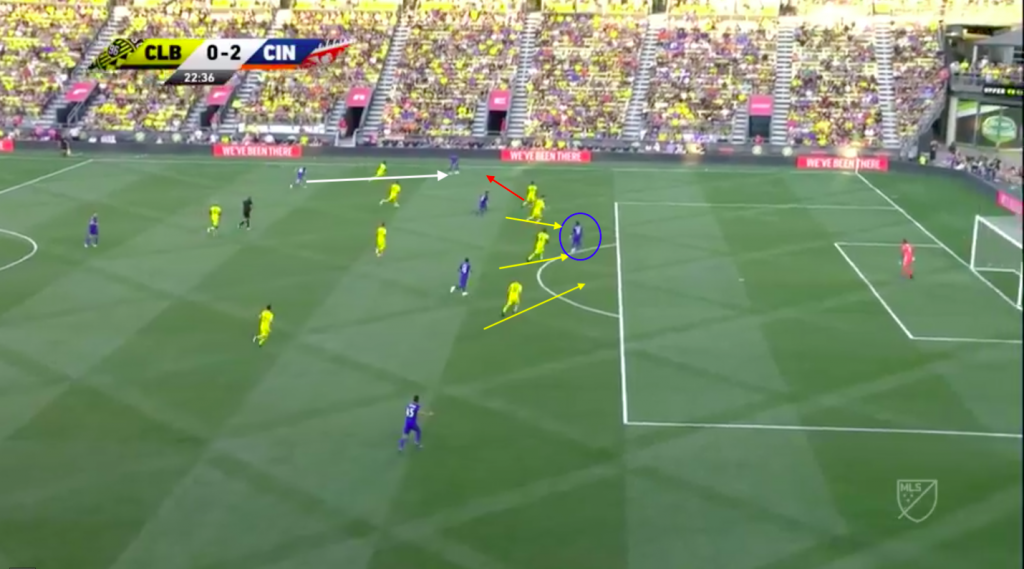 Both center backs moved centrally toward Mattocks. This caused momentary confusion that caused left back Connor Maloney to have to shift more central to track the run of Allan Cruz, while right back Harrison Afful hesitated to close down Roland Lamah, unsure as to whether or not Crognale would pick up Ulloa. 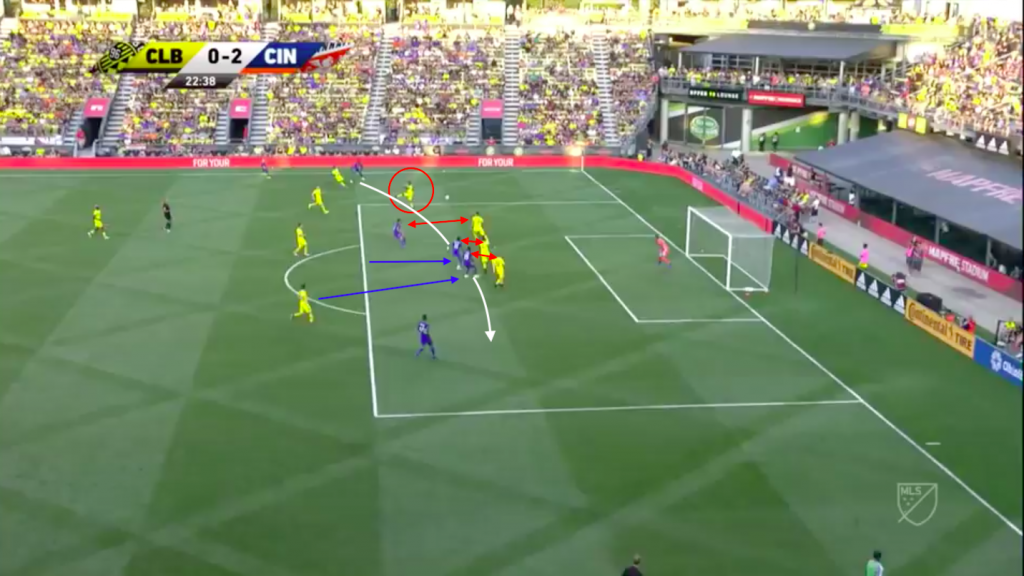 As Lamah served the ball in, Afful (red circle) was caught in no man’s land, unable to mark Ulloa or prevent the cross. Ulloa moved into the box, forcing Cognale to pick him up. This left Jonathan Mensah and Maloney to track Cruz and Mattocks, compacting three Crew defenders in a small space in the center or the box and leaving Emmanuel Ledesma with lots of space at the back post. 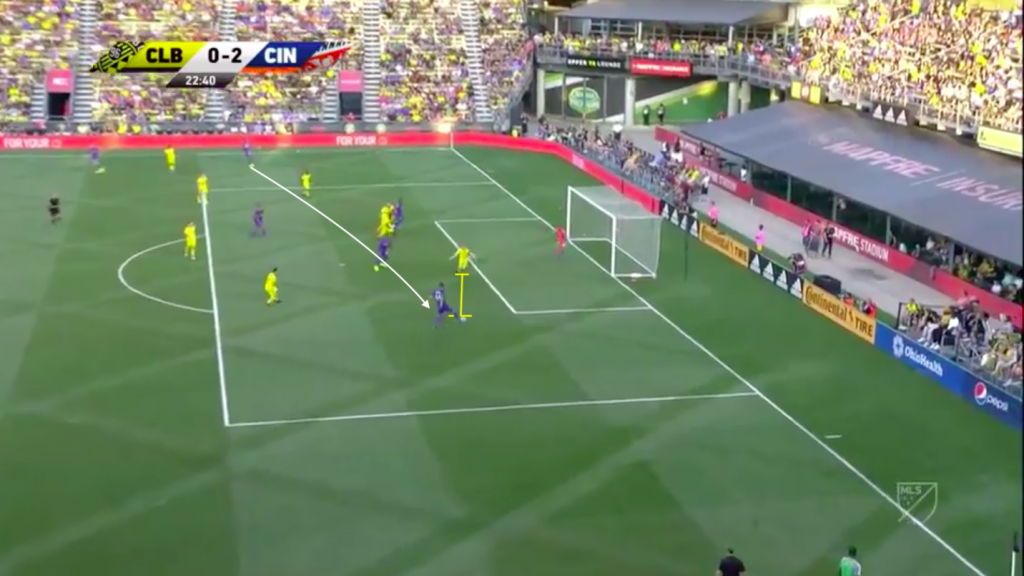 The ball skipped through the box and found Ledesma, who had enough time and space to settle the ball before finishing with his favored left foot.

The Zardes penalty kick was earned from an early ball played into the box by Afful. The early cross caught van der Werff slightly out of position, tracking Zardes from the weak side instead of maintaining proper defensive position, which is goal side, and a half step toward the ball. 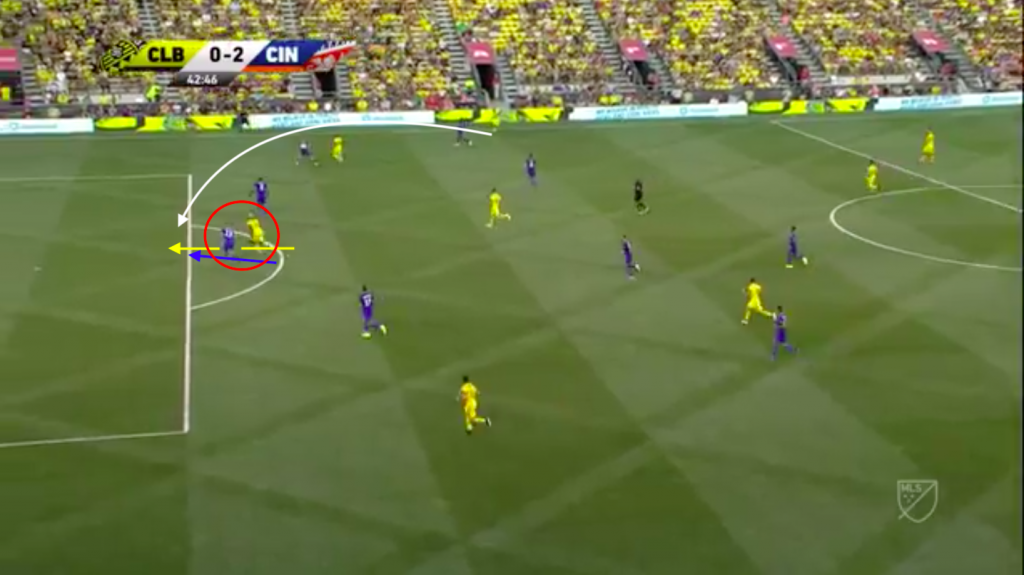 The penalty call was a bit soft, but had van der Werff maintained goal side/ball side positioning, his slight bump on Zardes wouldn’t have been necessary.

Santos’s screamer followed a Columbus free kick which was taken quickly by Afful. He found Wil Trapp positioned between Ulloa and Stanko, with space to turn. 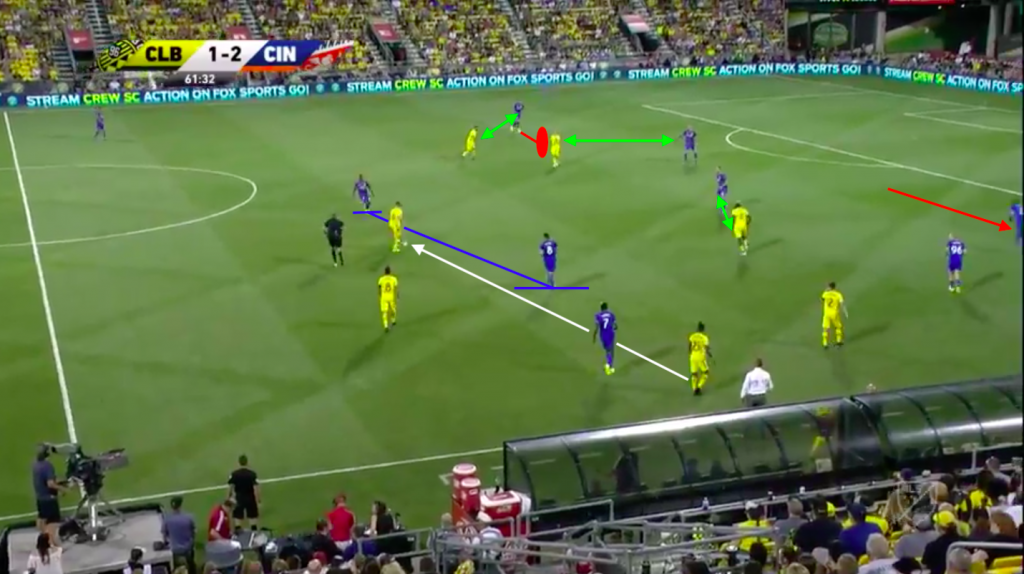 With Waston pulled left to support the play, Caleb Stanko was matched up on Zardes. This left van der Werff matched up with Santos and Deplagne matched up with Luis Diaz. Deplagne was slow shifting inside of Diaz, leaving the speedy winger with an unimpeded path toward goal. 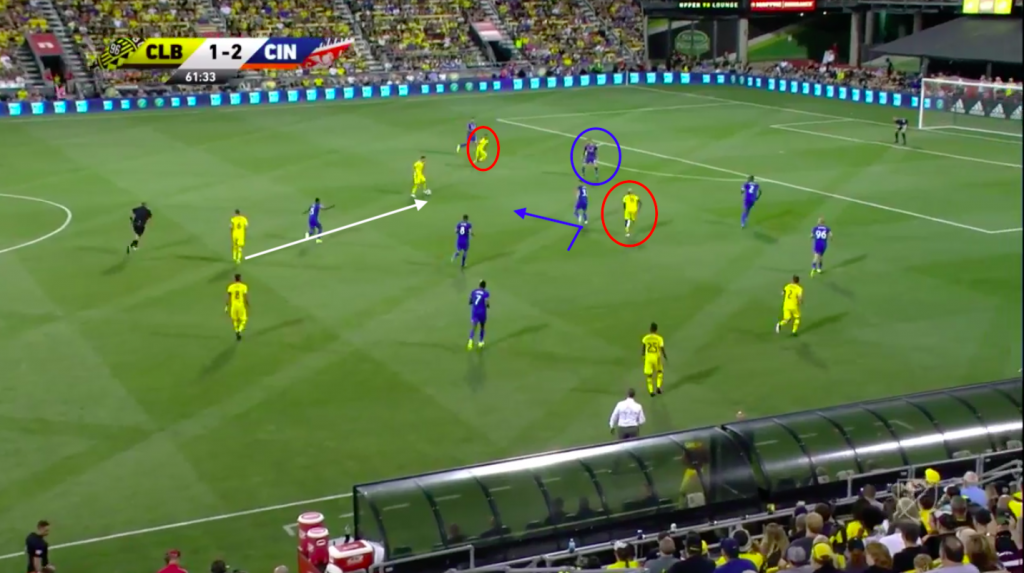 As Trapp found Santos, Diaz and Zardes both made aggressive runs forward. This left van der Werff frozen, unsure whether to pick up Diaz’s run or close down Santos. Stanko momentarily tracked Zardes’s run before trying to challenge Santos’s shot and was too late to prevent the midfielder from unleashing his wonder strike. Better positioning by Deplagne, or better communication between Waston and Stanko, and perhaps the FCC defense could have closed down Santos sooner.

Though a draw after leading by two goals feels like FC Cincinnati came up short, scoring twice is something that the Orange and Blue haven’t mustered since their win over Montreal on July 13th. Add to that the fact that a draw keeps the season-long Hell is Real Derby up for grabs, and FCC fans can look with hope toward the home stretch of the season.