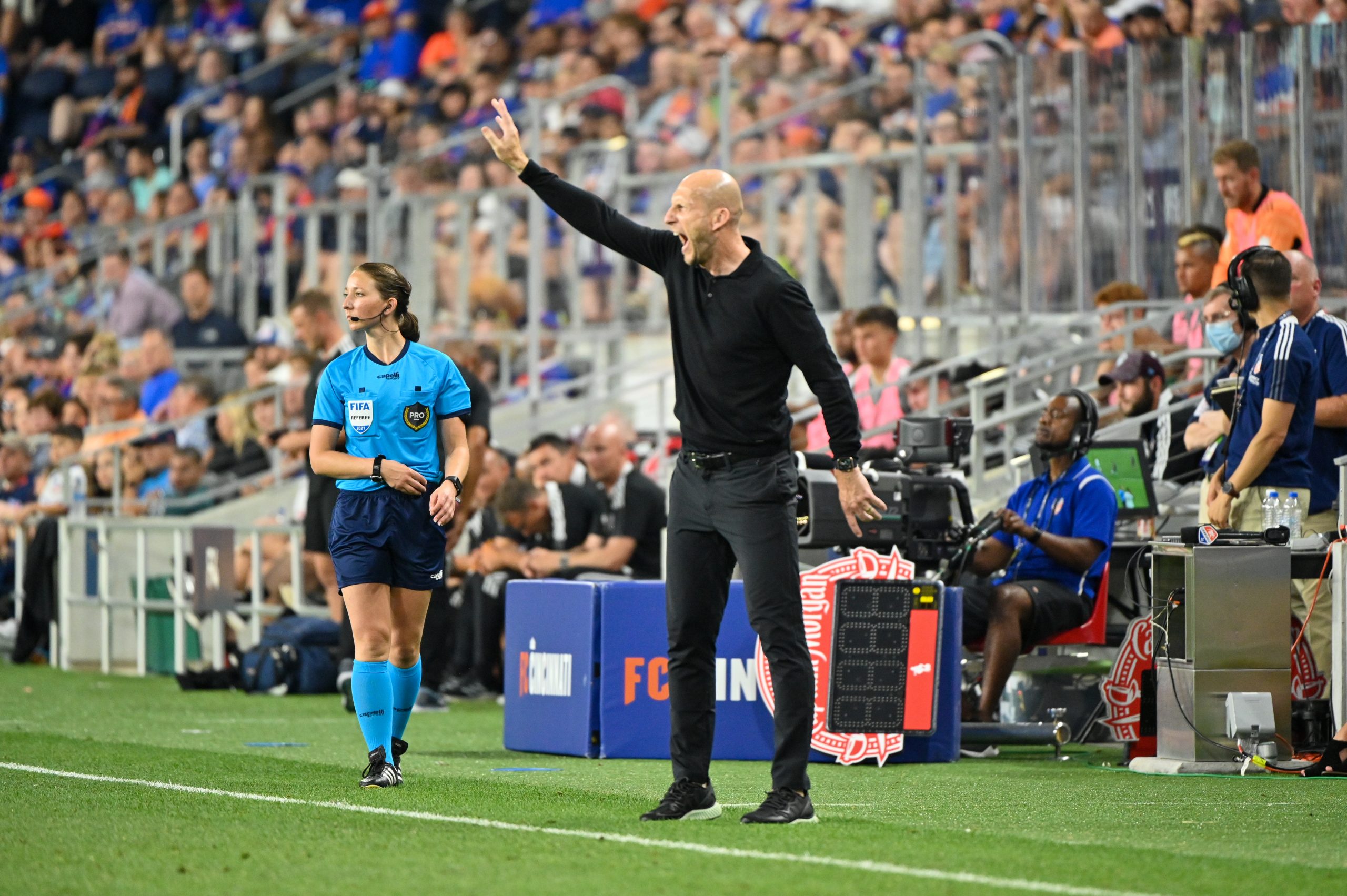 Scoring four goals on the road feels like lightyears of progress from last season. FC Cincinnati’s four-goal night Saturday looks great if you just stop reading there. In pretty much every other aspect, FC Cincinnati’s attacking play was lacking. The other topline stats after goals scored — possession, shots, shots on target — all seriously favored CF Montreal. And that’s not all. The offensive performance looks less and less convincing the closer you look.

The first two goals as well as another excellent opportunity in the 25th minute were all direct results of pressure high up the field against Montreal defenders. However, with the ball effectively pinned in FC Cincinnati’s half and one fewer attacking player, aggressive pressing opportunities were limited throughout the night. On the flip side, Montreal pressed aggressively in FCC’s defensive third, making it difficult for the Orange and Blue to build from the back.

Despite going up by two goals, FCC’s inability to do much of anything with the ball gave Montreal the time and real estate to dictate the game. No one should expect 2021 FC Cincinnati to kill a game by controlling possession like a peak Pep Guardiola-led Barcelona side. However, just giving the ball back to Montreal time and time again and asking the team to defend in a formation that they’ve struggled in for large parts of the season is a recipe for disaster.

When it did get the ball back, FC Cincinnati frequently looked to play directly to their front two, Álvaro Barreal and Brenner. It rarely worked. As the nominal strikers in coach Jaap Stam’s formation, Barreal and Brenner successfully received 45 of 71 passes targeting them, just over 63%. That’s not exactly their fault, either. Asking those two to win aerial battles against center backs was always going to be a losing proposition. Even in situations where direct play created 50/50 balls in the middle of the field, FC Cincinnati players were rarely in a position to challenge to win the ball. Also, when Brenner successfully received the ball, he was pressured to make a pass more than any other FC Cincinnati player.

One last demonstration of Montreal’s dominance with the ball is its edge in progressive actions completed. Montreal was very successful moving the ball forward against FCC. It completed 102 progressive actions, defined as a dribble or pass moving the ball at least 5 yards closer to FCC’s goal, during the match. It should be noted progressive pass and carry statistics only count actions taking place in the attacking 60% of the field. Because FC Cincinnati was so consistently pinned back in its own third of the field, that progressive action number will be lower. However, that caveat aside, it’s just another example of how the Orange and Blue struggle to put together attacking moves.

FC Cincinnati had been much better of late in limiting the quality of chances for the opposition. That was not the case on Saturday. Montreal ended the match with 17 shots, 10 on target, creating 2.9 expected goals per MLS Soccer. Even discounting Mason Toye’s penalty in the 72nd minute, FC Cincinnati allowed 2.1 xG on 16 shots. Many were relatively tame efforts but Montreal created, or was gifted, enough good chances to be in the match.

By my count, Stam has lined FC Cincinnati up in a three-center back formation for 331 minutes so far during the 2021 season. The results are not pretty. In the 749 non-three center back minutes, FC Cincinnati is pretty close to even in expected goals scored and allowed. I wrote about this a little bit during the international break. Even though the numbers have improved, FCC still gives up better opportunities and produces dramatically less going forward with three center backs on the field.

The three-center back formation Stam favors doesn’t seem to put his midfield personnel in positions to succeed, as well. Yuya Kubo continues to make strides playing as the deepest holding midfielder, but Haris Medunjanin’s lack of mobility was on display in multiple Montreal goals. Medunjanin deserves credit for his pressing on FCC’s opener, but the Orange and Blue missed Allan Cruz’s energy and pressing. The third man in midfield, Luciano Acosta, didn’t impact Saturday’s match like FC Cincinnati supporters are used to seeing.

So much of FC Cincinnati’s dangerous attacking play runs through Luciano Acosta. Used as part of a midfield three, Acosta defended deeper, preventing him from getting on the ball further up the field in transition situations. Just look at where Acosta attempted passes and dribbles on Saturday per MLS Soccer. 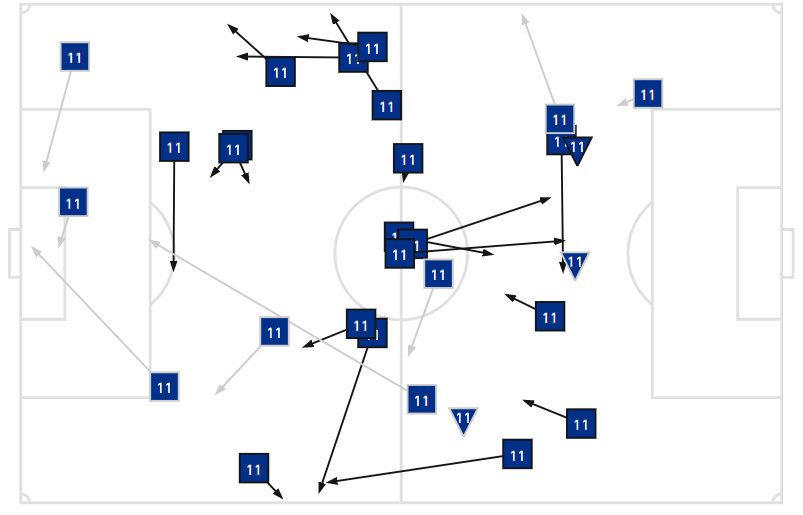 FC Cincinnati hasn’t shown all that much of an attacking plan outside of Acosta so far this season. On Saturday, Acosta recorded season lows in number of touches, passes attempted and completed, passes targeted and received and carries. Deploying him deeper and asking him to take on more defensive responsibilities hamstrings FC Cincinnati’s most dangerous attacking threat.

Brenner’s pressing played major roles in FC Cincinnati’s first two goals against Montreal. On Medunjanin’s opener, Brenner won a ball near the top of the 18-yard-box and found Acosta, who played it to Medunajanin. FCC’s second was a great example of Brenner’s work rate. He chased a back pass to Montreal’s keeper, James Pantemis, and won the ball off his foot, sending it into the net.

His second goal demonstrated the finishing skill associated with Designated Player strikers. After a great run by Barreal, Brenner touched on a pass from Barreal around a defender’s legs into the corner of the goal from 13 yards.

Unsurprisingly, given how FCC struggled to get the ball into dangerous areas, Brenner did not have many other opportunities. He had just 10 touches in the final third, and three in the attacking penalty area. His only two shots of the game were goals.

Brenner has impressed with his all-around game in recent weeks. The only missing piece was him putting the ball in the back of the net. Hopefully Saturday is the start of a scoring run. Regardless, Brenner has demonstrated his value to the team with his passing, pressing and now scoring.

Brenner finally had a breakout game for FC Cincinnati. Now it needs to find a way to put him in a position to succeed more often.

Much has been made of the extenuating circumstances surrounding Saturday’s match. At the end of the day, FC Cincinnati set up against Montreal in a formation it has struggled in, offensively and defensively, for much of the year. The result wasn’t much different than previous matches in the same setup went. Stam certainly was constrained in what team he could pick and how much time those players had together on the training pitch in the week leading up to the match.

Particularly with the ball, FC Cincinnati struggled in the same areas it has all season, even during the four-match unbeaten run. Saturday was a step back defensively from previous matches. At least we won’t have to wait too long to see if that performance was a one-off.