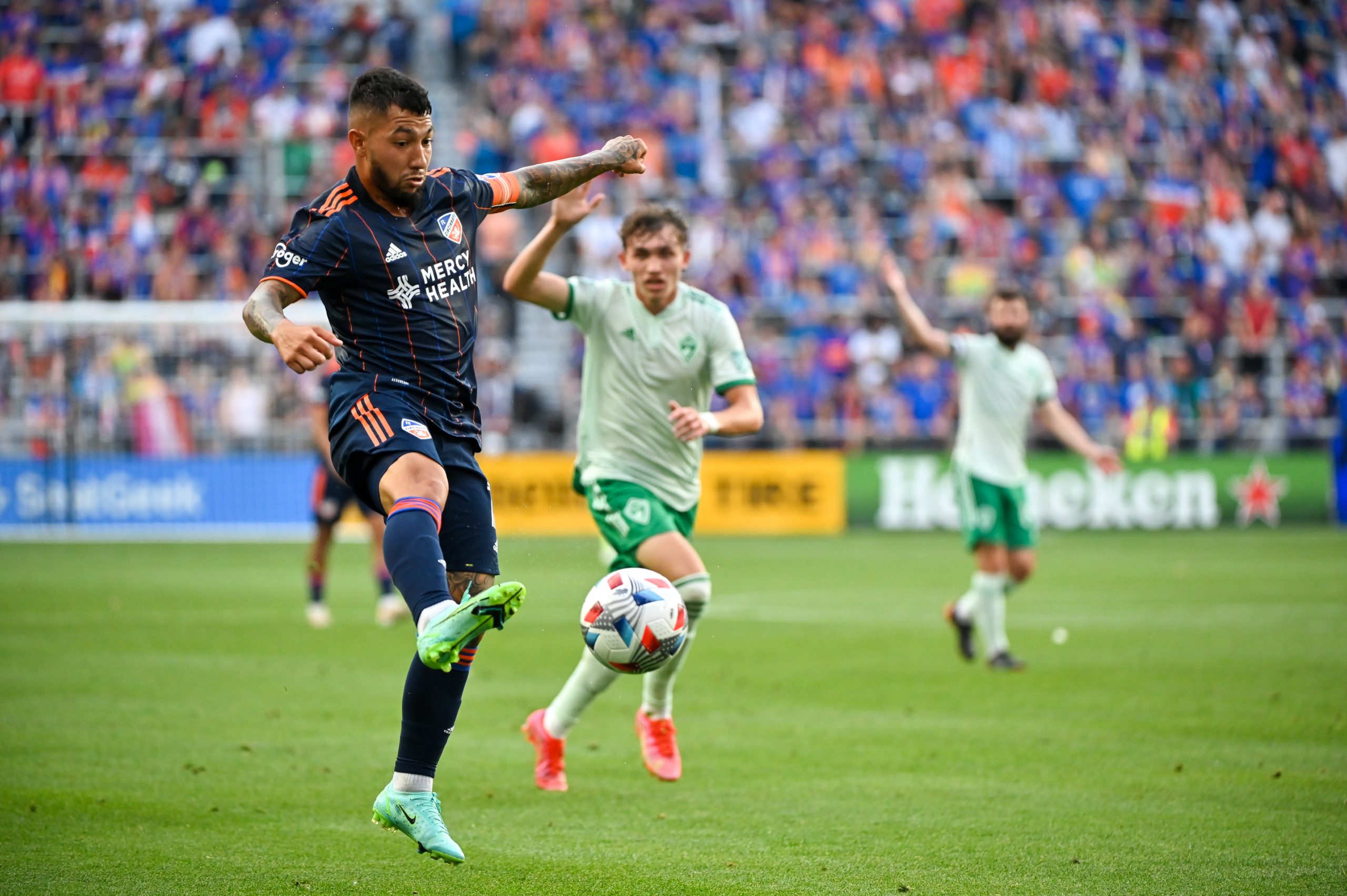 FC Cincinnati has finally found a true No. 10 in Luciano Acosta. Nate Gilman looks at Acosta’s attacking numbers and where he might improve.

FC Cincinnati hasn’t had a true playmaker leading its offense since it joined MLS. Luciano Acosta’s arrival as a Designated Player was billed as the answer to that long, drawn-out search. Through seven matches in the 2021 MLS season, Acosta has shown an ability to consistently create quality goal-scoring chances for teammates and himself, as well as chipping in with a spectacular goal or two. He’s added a new dimension to FC Cincinnati’s attacking play and provided a new dimension going forward. In short, Acosta has lived up to his billing and then some.

Much Needed Shot and Goal Creation

Acosta’s contributions in creating shots for himself and teammates have had a major impact on FCC’s attack. Per Football Reference data, Acosta creates 7.29 shot-creating actions per 90 minutes, second-most in MLS, trailing only New England’s Carles Gil’s 9.00 SCA/90. Trailing an MVP candidate on one of MLS’s best teams speaks to Acosta’s qualities as a playmaker.

Football Reference’s shot-creating actions count both the action immediately prior to the shot as well as the action preceding it. For an example, take Acosta’s goal against Toronto FC. Brandon Vazquez was credited with a shot-creating action because of his pass to Acosta at the top of the box. Acosta was also credited with one because he dribbled past Michael Bradley to create a window for the shot.

Putting teammates and yourself in positions to shoot is obviously valuable, especially for a team that previously struggled offensively like FCC. We can dig deeper into those numbers, however. Combining Football Reference shot information and MLS’s expected goals data provides an expanded look into the quality of chances Acosta creates for himself and for teammates.

In seven matches, FC Cincinnati shots directly assisted or “hockey assisted” in some way by Acosta totaled 5.74 expected goals. In the seven matches that Acosta has played in 2021, FCC tallied 11.02 expected goals. Acosta’s involvement in the direct build-up to more than half of FCC’s expected goals leads the team. Nearly all of the xG value of Acosta’s shot-creating actions comes from his passing (4.07 xG) and dribbling (1.27 xG).

These data points shouldn’t surprise any FC Cincinnati fan watching the 2021 season so far. Stats back up what we’ve all seen: Acosta is the primary driving force behind FC Cincinnati’s attack.

Elite With The Ball

Acosta is an elite MLS midfielder with the ball at his feet. Acosta ranks among the elite in driving the ball forward on the dribble, including into the final third of the field and the opposing team’s penalty area.

One of the only downsides of Acosta’s game with the ball at his feet is how often he loses it either after miscontrolling the ball or being dispossessed by an opposing player. However, when comparing how often Acosta loses possession under those circumstances to other MLS players, it reveals he’s in good company. 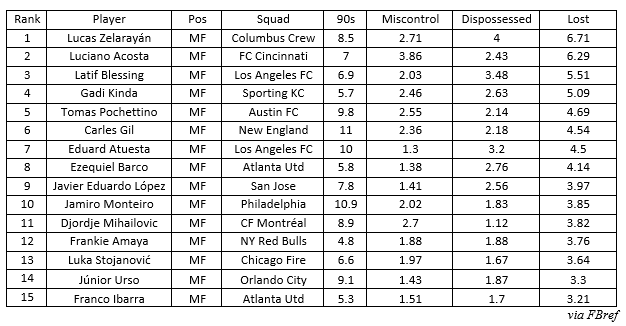 If Acosta can cut down on some turnovers, it would certainly help, but dealing with losses of possession from miscontrolling the ball and dispossession are just part of the cost of doing business with a creator of Acosta’s quality.

When Acosta chooses to pass, he excels in specific areas. Compared to MLS midfielders, Acosta is absolutely elite at playing key passes and finding teammates in the penalty area. Acosta’s pass accuracy is one area that could be prime for improvement. Acosta completes just under 75% of his passes from 15-30 yards and 56.50% of his passes longer than 30 yards. Both of those numbers rank him in the first and ninth percentiles respectively among MLS midfielders. Because Acosta is tasked with carrying so much of FC Cincinnati’s attacking play, he attempts more difficult passes than some. However, if Acosta can dial back the difficulty of passes attempted, FCC’s offense should be able to retain the ball a little more easily.

Where To From Here

So what should we be looking for from Acosta as the 2021 season continues?

FC Cincinnati needs to find a way to get the ball to Acosta in areas of the field where he can thrive. Part of that solution has to include finding another ball progressor from midfield so Acosta doesn’t have to drop as deep to find it. As shown above, Acosta can be elite when creating in the final third of the field. Coach Jaap Stam and company need to devise a game plan to maximize Acosta’s creativity and offensive talent.

Stam also needs to keep Acosta out of the way defensively. Acosta is never going to be a ball-winner or defensive stalwart in midfield, though he will chip in with the odd tackle higher up the field in a high press. However, any game plan that relies on Acosta holding a rigid defensive shape in front of the back line is not destined for success.

Acosta needs to continue to refine his on-field chemistry with Brenner. For FC Cincinnati to really improve offensively, its two marquee signings from the 2020 offseason need to combine better. So far in 2021, passes from Acosta to Brenner have resulted in just four shots during live play. None of those four have been particularly good chances, either. If Acosta and Brenner can get on the same page, FCC should have situations where Brenner is finally getting good shots in dangerous areas.