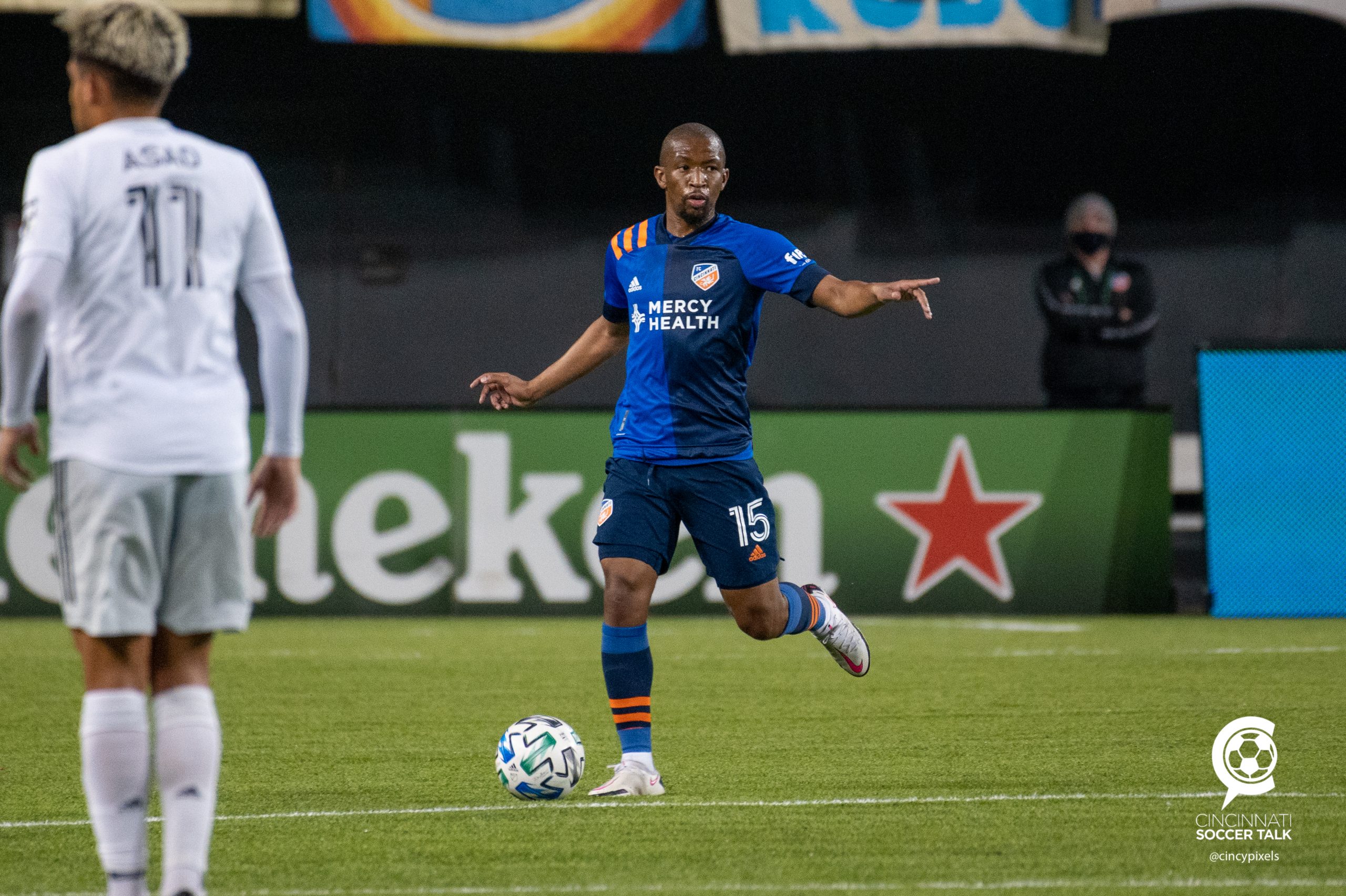 Kamohelo Mokotjo and Ronald Matarrita have liked what they’ve seen out of the first few days of FC Cincinnati’s preseason training. Both spoke with reporters via videoconference on Thursday.

Costa Rican defender Ronald Matarrita and South African midfielder Kamohelo Mokotjo joined FC Cincinnati a few months apart. But in large part, both could be considered new additions to the roster that has been overhauled in preparation for the move into West End Stadium.

Mokotjo made nine appearances, including six starts, for the Orange and Blue after being signed from English Football League Championship side Brentford. That was barely enough action for him to regain his footing coming off an injury. But coming into this preseason, the pacey center midfielder, who turned 30 this week, is back up to speed.

“This league has a lot of speed,” Mokotjo said via videoconference on Thursday. “You have to be fit and healthy to maintain a high level of performance. Physically, I think I can only get stronger. I also think I can have more of an influence this season on my teammates around me.”

Unlike Mokotjo, who is still in a learning curve in MLS, Matarrita is an MLS vet who was acquired in a trade with New York City FC in December. He brings a wealth of playoff experience, something he hopes to impart on his FCC teammates.

“For me, this project was very interesting,” Matarrita said via videoconference through translator Anwar Chagollan on Thursday. “Every season I played with NYCFC, we made it to the playoffs. If we continue to work hard and build that chemistry, we can get to the playoffs.”

While Mokotjo has had time working under coach Jaap Stam, this is Matarrita’s first opportunity to work with the former Manchester United star on the training pitch. Their initial conversations were constructive and to the point, and the Alajeula, Costa Rica, native said he appreciates Stam’s no-nonsense style.

“He talked to me about my function and what I needed to do on the pitch, and that’s all I need,” Matarrita said. “He’s a very direct person. When he talks to you, he looks straight into your eyes and is very blunt. I like that. He has character. He was a very successful player. That makes it very easy to listen to him and follow his philosophy.”

“Everyone knows he’s a hard coach,” he said. “He wants us to play total football. To play exciting football. Football that’s results orientated.”

Unlike Matarrita, who grew accustomed to success in New York, Mokotjo got a taste of the frustration that continued to build during the 2020 season. Of his nine appearances, eight were losses. Mokotjo did play 74 minutes in the 2-1 win over Columbus, but that was his only taste of victory in the Orange and Blue.

Still, Mokotjo says he’s encouraged by the new additions and the environment in the early days of training.

“We learned a lot from last season,” he said. “I feel like the boys came back in great shape. I think last season there were a lot of good spells in games. Obviously, we knew we could improve. I believe the new players that have come in will make us stronger. We all need each other to perform to get maximum points and results. The fans and everyone who is living in the city can look forward to a very good season.”

And a season played almost exclusively on grass. As for many international players, an artificial surface like the one at Nippert Stadium took a lot for Mokotjo to get used to. The lush surface at West End Stadium will be a return to normalcy for many FCC players.

“It will make a huge difference, a positive one,” Mokotjo said. “The speed of our game will be even higher. It’s favorable for everyone to play on grass — fewer injuries. It will help a lot. I’m just looking forward to playing in the new stadium and having good results. I must say the club has made a lot of good signings.”

One in particular stands out – Brenner. While the Brazilian striker has been training on his own and away from the team since his arrival in accordance with COVID-19 protocols, Matarrita is very familiar with the 21-year-old stalwart and is looking forward to joining him on the pitch.

“I had already seen him play on TV in Brazil,” Matarrita said. “Overall Brenner is a great player. I had an opportunity to talk to him and he’s also a great person. Super Bueno.”

Hope always springs eternal in March, but the optimism and energy that Mokotjo and Matarrita exude at least suggests that things are beginning to shift in a positive direction for FCC. If nothing else, they suggest a new, attacking style of football in the West End.

“Stam has reinforced and enabled me to have the liberty to attack,” Matarrita said. “I didn’t have that before on NYCFC.”