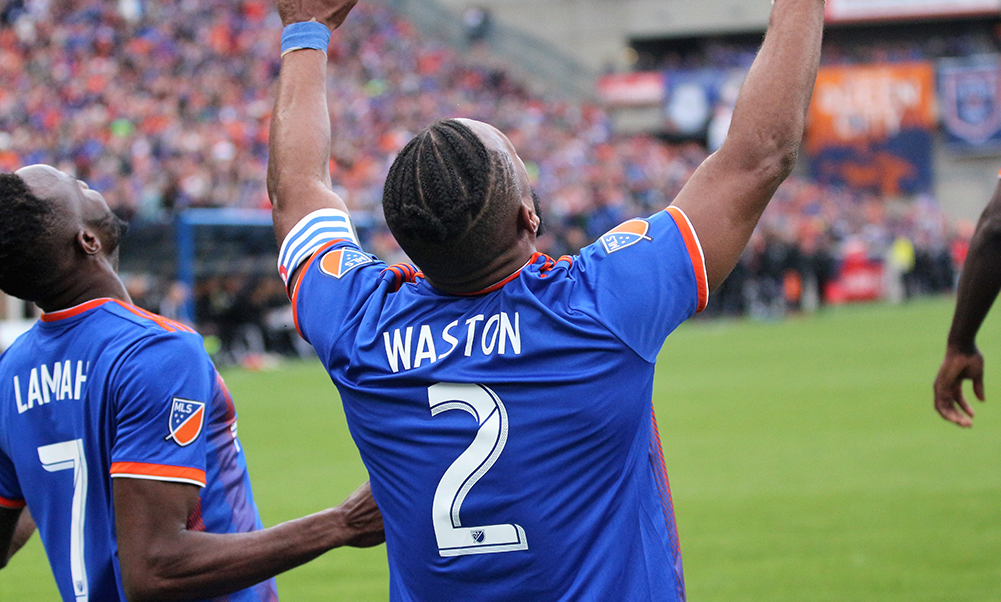 After reaching the knockout round of the MLS is Back Tournament, FC Cincinnati captain Kendall Waston said, “I think right now we are better.” The club hosts D.C. United at 7:30 p.m. tonight.

FC Cincinnati was among the surprise clubs in the MLS is Back Tournament, advancing to the knockout round with victories over Atlanta United and New York Red Bulls before losing to eventual champion Portland on penalty kicks.

But while FCC fell only a Jurgen Locadia sitter short of the quarterfinals after losing 4-0 to Columbus in the opener, it’s clear that missed opportunity against the Timbers is still eating at the soul of head coach Jaap Stam.

“Against Portland, we should have won and gone to the next phase,” Stam said via videoconference with media members on Wednesday. “We didn’t finish off the opportunities that we had towards the end of the game, which was unfortunate. That happens as well.”

But Stam’s frustration wasn’t aimed solely at Locadia, who misfired a potential winner in the 87th minute with the score tied 1-1.

The former Manchester United man will expect more from his club on Friday night when the season resumes against D.C. United in a mostly empty Nippert Stadium. And he’s been demanding more from them in training this week at the Mercy Health Training Center.

Kendall Waston described training sessions since the team left Orlando as intense and focused. The Costa Rican defender said the club benefited from its time in the ‘bubble’ in Orlando, Florida, where it quickly advanced from the education phase under Stam to the implementation phase.

“I think right now we are better,” Waston said Wednesday via videoconference. “The mentality of winning is still there. At the beginning, it’s what we’re going to do, getting to know the coaches, getting to know the system, the way they want us to play. When you can win a game, that increases your belief. Having those games in Orlando was a great test for us. It’s a good challenge to improve and show what we are capable to do.”

FCC currently sits eighth in the Eastern Conference with six points from five matches. They are in (gulp) a playoff position with the expanded postseason, but Stam is still sorting out his roster and a style of play moving forward.

So how will he approach Friday’s match? Will it be more of the same 5-3-2 system Stam implemented in Orlando, the proverbial “parking of the bus,” or will FCC see an opportunity to exploit a D.C. United team that has picked up five points from five matches and sits 10th in the Eastern Conference?

“I’ve got a strong idea of how I want to play, and what I want to do eventually,” Stam said.

By “eventually,” Stam likely is eluding to the roster limitations he has at the moment. FCC is without Fatai Alashe and Kekuta Manneh, who were traded earlier this week, but they will at some point soon have the services of South African midfielder Kamohelo Mokotjo, formerly of Brentford FC of the English Championship. The addition of Mokotjo puts FCC’s roster at the required 18, but with three matches to play in nine days.

“You always want to have as (many) players as you can,” Stam said. “Sometimes certain situations happen in terms of making choices with players, players are making certain choices themselves. We’re working to keep everybody fit.”

In terms of health, Stam said there are only a couple of injury concerns going into Friday’s match. One player they are certain to be without is defender Maikel van der Werff who is recovering from a groin injury. He is not yet training with the team but is working outside with physios.

“He doesn’t feel his injury anymore,” Stam said. “He’s working on his conditioning, and still needs to do more. He’s looking very promising.”

Locadia, who did not appear in a match in Orlando until the second half against Portland due to a hip injury, is now healthy and a full participant in training. Perhaps as importantly, the Dutch striker appears to have turned the page from his late gaff against the Timbers when he misfired from a few feet out.

“After that, he kept on working,” said Stam. “He’s working with the team, he’s training 100%, he’s looking confident, fresh and sharp. Hopefully, he can show himself again on Friday.”

Of course, Friday’s home opener will be among the most unusual in the club’s brief MLS history with no fans in attendance for the first three announced fixtures in Nippert Stadium, where FCC has enjoyed playing before record crowds dating to their time in the USL.

“We’re not going to have any fans, not even our family in the stadium, so it’s going to be really weird,” said Waston.

One thing to look for on Friday night is some chippiness between the two clubs stemming from last year’s regular-season finale in D.C. when FCC managed to escape with a 0-0 draw despite being reduced to nine men.

That result denied United a home playoff match, and the D.C. players weren’t too pleased with FCC’s celebration afterwards.

“For sure, they’re going to remember that,” Waston said. “It was an unusual day, they were saying that we weren’t going to qualify (for the playoffs) and we were celebrating, blah-blah-blah. But that is part of the game as well. If they’re still remembering that, I know they’re going to try to come and beat us. It’s that hot sauce you have sometimes have to put out there.”