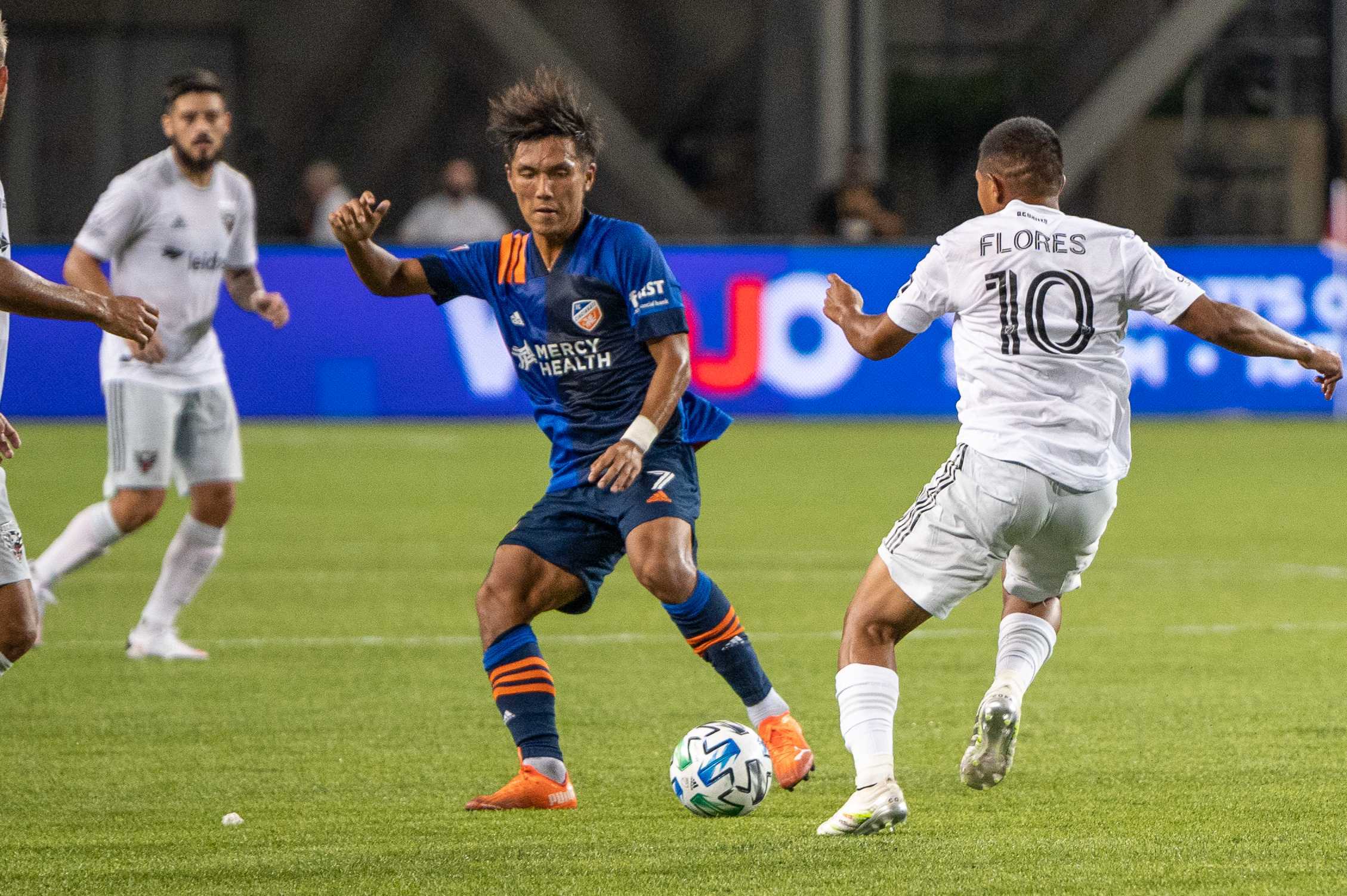 And the moral of the story for FCC on Friday night wasn’t so much Locadia missing a potential winner, it’s that FCC had a chance to win

CINCINNATI – It was another moment for Jurgen Locadia. Another opportunity missed for the Dutch striker and FC Cincinnati.

But for head coach Jaap Stam who understands as well as anyone how far the Orange and Blue already have come since last season, it’s important to maintain perspective.

“It’s also important for every striker to get in positions where you can score, that’s also very positive,” Stam said. “Some strikers don’t do that often enough. We all know that Jurgen has that quality and ability to give us a lot of goals.”

In the 84th minute of Friday’s night’s 0-0 draw against D.C. United in an empty Nippert Stadium, Locadia found himself alone in front of goalkeeper Bill Hamid. But, Locadia’s effort from the right side of the box caromed hard off the far post.

It wasn’t a sitter by any means, nothing like the one that sailed over the bar from a few feet out in the 87th minute in the MLS is Back Tournament in Orlando, denying FCC a victory over Portland and a trip to the quarterfinals.

But it was another one the loanee from Brighton & Hove Albion should bury in the back of the net. In fairness, Locadia was making just his second start of the season. He played the full 90 minutes for the first time since March 7.

“Every striker has moments like that,” said Stam. “Every striker gets in front of the goalie and gets an opportunity. Most times he will score, and Jurgen will do that as well. But sometimes he misses. That’s football.”

And the moral of the story for FCC on Friday night wasn’t so much Locadia missing a potential winner, it’s that FCC had a chance to win.

In fact, they have either won or had a chance to win each of their last four matches, in which they have recorded three clean sheets.

“It’s not just the backline,” said Stam, of his newly-defense minded club. “You play with 11 players and they all have to defend. In the first half, we gave them too much space. You don’t want to concede. You want to take something from every match.”

Friday’s draw gave them seven points from six matches, although all seven of those points have come in the four matches since Stam took over.

FCC finds itself in a playoff position in the very early stages of the MLS’ regular season restart. Coming off an historically bad inaugural season in the league, FCC players are talking about missed opportunities. Last year, there were hardly any opportunities to miss.

“Once you start to win games, you want to win every game,” said defender Tom Pettersson. “We have a new coach, system, you can’t just … we’re still in the beginning of this journey. You need to play games to make it work.”

It took time for the Orange and Blue get acclimated to the cavernous Nippert Stadium sans fans on Friday night, and find their footing on turf after spending so much time on natural grass in Orlando.

D.C. dictated play for much of the first 30 minutes. At one point, United had 28 touches in FCC’s final third to only three for the home team. The style of play was similar to what FCC deployed in Orlando, although Stam said at halftime that he wanted his team to be more aggressive.

“The game plan was to play out of the back,” forward Joe Gyau said. “We wanted to get forward but there’s a time and place for that. We had to stretch them out a little bit and we found our groove eventually.”

Things opened up for FCC later in the first half with Frankie Amaya emerging to deliver a precision pass in the 38th minute to Locadia in the box but a poor first touch by the Dutchman prevented a shot.

Three minutes later, Amaya took aim from about 25 yards out but had his shot sail a couple feet wide.

The next real chance in the match was Locadia’s near-winner.

“As coach told us after the game, in games like this you’re only going to get so many chances,” Gyau said. “Unfortunately, Loca hit the post.”

A couple of key substitutions by Stam helped change the flow of the match for FCC.

One was out of necessity when at halftime, Stam substituted Siem de Jong who picked up an injury and replaced him with Allan Cruz. Cruz had an impact early in the second half but FCC couldn’t find many opportunities against United’s press.

In the 67th minute, Stam brought on Andre Regattin to pair up with Locadia in the attack. Regattin impacted the match in his first five minutes. He whipped in a free kick from the corner of the box but it was high and wide and later hooked up with Locadia then got free for a shot that was saved by Hamid.

“We deserved the points,” Stam said. “It’s not easy when a team is pressing like that. After 20 minutes, we took it over. There weren’t a lot of opportunities in the second half but we were better on the ball.”

There were a handful of injury issues for FCC which played without midfielder Haris Medunjanin because his wife gave birth. Bobby Edwards was the backup in goal with Spencer Richey out with a concussion. Defender Maikel van der Werff is still working his way back from a groin injury. Aside from that, Stam had a strong lineup at his disposal.

It’s likely that United remember how FCC, under then-head coach Ron Jans celebrated a 0-0 draw in last year’s regular season finale at Audi Field. The loss knocked D.C. out of contention for a home playoff game and they lost 5-1 at Toronto in the first round.

The stakes weren’t nearly as high for Friday’s match, and neither team will be bothered with the point. But for the second straight match, FCC was left wanting more.

“Of course, you want the three points, and we’ve talked about that as a team,” Stam said. “Unfortunately, we couldn’t finish it off tonight. From where we were to where we are now, we’re not losing games. We’re happy with that.”