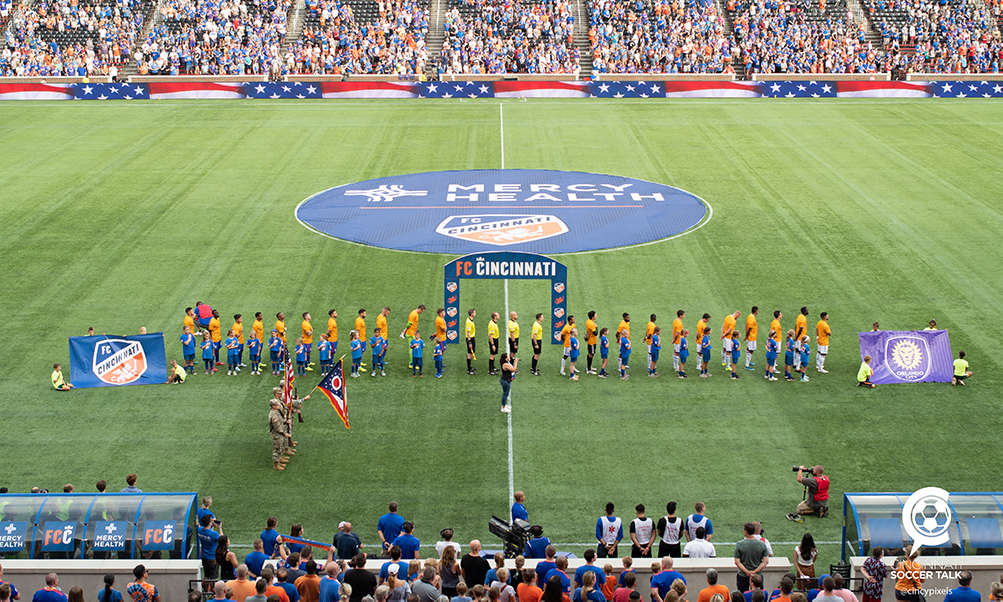 FC Cincinnati begins its last home season at Nippert Stadium — five months later than originally scheduled because of the COVID-19 pandemic — against D.C. United on Friday.

FC Cincinnati will play soccer at Nippert Stadium after all in 2020.

Friday’s 7:30 p.m. match against D.C. United will be decidedly different. There will be no fans. No march to Nippert from establishments on and around Short Vine. No ruckus from the Bailey — no smoke, no drums, no chants. But there will be soccer.

The COVID-19 pandemic has thrown a wrench into FC Cincinnati’s last season at Nippert, the place it has called home since its infancy in 2016 as a USL side. The club was barely 48 hours away from its final home opener at Nippert back in March when MLS shut down all competitions in response to the pandemic.

MLS started back up again in July with the MLS is Back Tournament in Orlando, Florida, where FC Cincinnati reached the Round of 16 before falling to eventual champion Portland in penalty kicks. Last week the league announced the first six games for each team — three at home, three on the road — to restart the regular season. Each of the first three will be in front of an empty Nippert. The intention is to play 18 additional games in phases, concluding on Nov. 8.

After placing second in MLS is Back Tournament group play, the Orange and Blue are eighth in the East (2-3-0, six points). D.C. United (1-2-2, five points) went winless in group play and sit in 10th place.

When last these two sides met, nine-man FC Cincinnati dug in for a scoreless draw to end the 2019 season in Washington. Just as gutsy, D.C. United recently produced its own result while shorthanded, climbing back from a 2-0 deficit with 10 men to draw Toronto FC in its MLS is Back Tournament group opener. Federico Higuain and Frederic Brilliant scored for D.C. in the comeback.

Higuain also scored late to give D.C. a draw against the New England Revolution, but it was held scoreless against Montreal to close out group play.

D.C. will be without midfielder Felipe, who is suspended retroactively after what was deemed a serious foul of Montreal’s Victor Wanyama.

FC Cincinnati will be looking to build on its tournament success.

There are several questions to ask for the Orange and Blue. First and foremost is how coach Jaap Stam will line up? The group victories against Atlanta United and the New York Red Bulls came in a 5-3-2 defensive posture. Will Stam continue to bunker? Or now that the club is out of a tournament format and with Jurgen Locadia presumably match fit, will Stam shift back to the 4-3-3 and look to be more possession-oriented?

In a 5-3-2, does Stam make any personnel changes, other than moving Locadia into the starting lineup — again, assuming he’s match fit.

If Stam does move back to the 4-3-3, what will the center back pairing look like, and how will the midfield shape up? Who sits in front of the back line as the central defensive midfielder? Caleb Stanko helped solidify the midfield in Orlando, but he’s not quite the distributor that Haris Medunjanin is. Can Allan Cruz crack the starting lineup for the first time since March?

Another question, perhaps the biggest one regardless of formation, is this: Can Locadia — or anybody else in FC Cincinnati’s attack — convert chances against a back line that’s considered one of the strongest in the league?