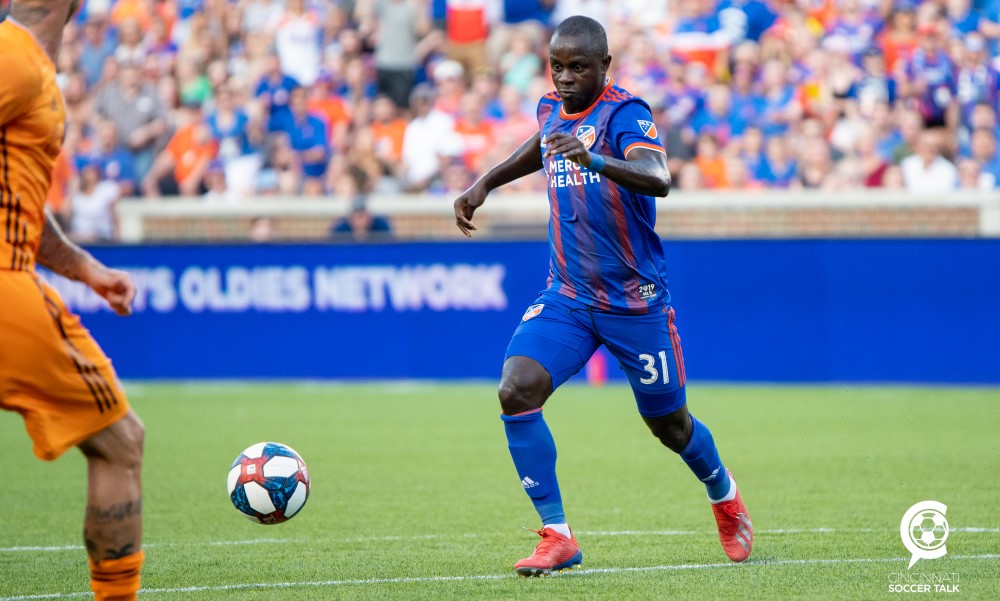 FC Cincinnati on Monday confirmed the report Sunday night of this week’s podcast guest Laurel Pfahler that the club has traded winger Kekuta Manneh to the New England Revolution. FCC will receive an international roster slot in return from the Revs through Dec. 31, 2020.

Manneh, was signed in the lead up to the club’s inaugural MLS season, making 29 appearances, including 16 starts. The Gambian winger logged four goals and three assists in his stint with FCC. This deal marks an end to an expensive proposition for the club after trading $250,000 in Targeted Allocation Money and $50,000 in General Allocation Money to Columbus for Manneh’s rights.

“We want to thank Kekuta for his role in helping build this club, having joined our organization in its inaugural MLS season,” FC Cincinnati General Manager Gerard Nijkamp said in the club’s press release. “We wish him all the best in the next step of his career. This move will give us greater flexibility in what we can do as we look to add to our roster for the remainder of the 2020 MLS season.”

Nijkamp is rumored to be adding one or two new players during this summer window which ends in late October. In order to bring in a player that can provide an immediate impact, the general manager will likely have to tap into the international player pool. FCC has a full complement of eight international registered players, requiring the club to add this 9th international spot.

The club is also rumored to be applying for Green Card status for several of their international players. A Green Card would reclassify that player as a domestic on the roster. That mechanism was used to reclassify Allan Cruz and Mathieu Deplagne this Spring.

FCC was likely able to part ways with Manneh due to the emergence of winger Joe Gyau in the MLS is Back tournament. Gyau was a standout in the tournament starting the last three matches in a right wing-back role. Traditionally a winger, Gyau provided a spark and would likely feature over Manneh due to his versatility and capability in the 5-3-2 formation.

It is unknown due to the current MLS CBA and roster rules, but the removal of Manneh’s $391,000+ salary could free up previously needed cap space and a sum of allocation money. The allocation money could help buy down a current players cap hit or possibly lower Cruz or newcomer Yuya Kubo’s designated player contract, freeing up a spot for a new max contract player. There have been conflicting reports, but rumors have linked former Borussia Dortmund attacker Mario Götze to MLS and FC Cincinnati.