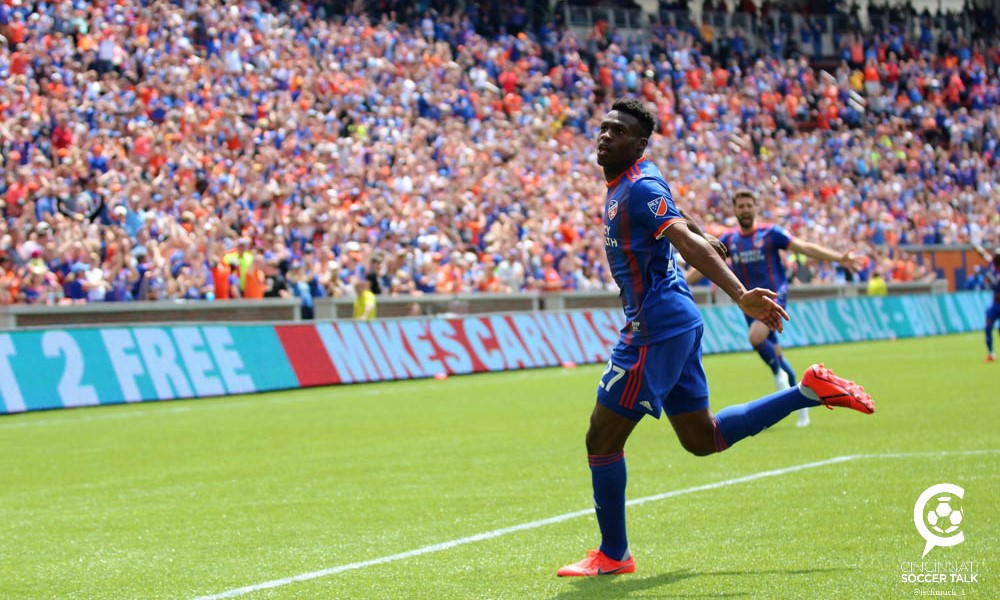 Fatai Alashe was acquired from the San Jose Earthquakes on July 30, 2018 for $60,000 in Targeted Allocation Money (TAM) and $75,000 in General Allocation Money (GAM). Alashe will join fellow inaugural signee Fanendo Adi in Columbus wrapping up what was an expensive and underperforming series of additions in the lead up to Major League Soccer.

“We want to thank Fatai for being an important part of establishing this club within Major League Soccer, joining our team before we had moved to MLS. We wish him well as he begins the next chapter of his career,” FC Cincinnati General Manager Gerard Nijkamp said in the club’s press release. “This move is being made with the intent to create better balance on our roster. Given the number of players we currently have at the central midfield position, we feel this is a move that is beneficial for both the club and Fatai.”

Alashe featured in 15 MLS matches for the club including 4 starts. One of his most memorable moments came in his stint with FCC in the USL notching a goal in his second-ever match for the club in a 5-1 route of ATL UTD 2. Alashe’s goal in the second half vs. Montreal Impact on May 11, 2019, ensured a win after the dismissal of former coach Alan Koch on May 7.

FCC was likely able to part ways with Alashe due to the success of winger Caleb Stanko and Frankie Amaya in the MLS is Back tournament. Both Amaya and Stanko started over Alashe in the tournament with Stanko logging 3 starts and Amaya 4 in Stam’s 4-3-3, then 5-3-2. A “jack-of-all-trades”, Alashe was a flexible piece, but not capable enough to start over many attacking-minded options or defensive stalwarts like Stanko.

This move drops FC Cincinnati below the minimum of 18 senior roster players. A move would have to be made before Friday’s match if the club does not want to receive a minimum roster charge penalty, which would equate to an estimated charge of around $3,000-4,000.

Nijkamp is rumored to be adding one or two new players during this summer window which ends in late October. It is unknown due to the current MLS CBA and roster rules, but the removal of Alashe and Manneh’s (traded to NE Revolution) $581,000+ total salaries could free up previously needed cap space and a sum of allocation money.

The allocation money could help buy down a current players cap hit or possibly lower Cruz or newcomer Yuya Kubo’s designated player contract, freeing up a spot for a new max contract player. There have been conflicting reports, but rumors have linked former Borussia Dortmund attacker Mario Götze to MLS and FC Cincinnati.

Please check out Pfahler’s patreon for more details on these moves.