FC Cincinnati booked its place in the knockout round of the MLS is Back Tournament with its second successive victory and clean sheet against the New York Red Bulls on Wednesday. Its 2-0 win came courtesy of a stout defensive shape, a Yuya Kubo 43rd minute goal and a Florian Valot own goal in the 56th minute. Here’s how it happened.

Coach Jaap Stam once again chose to set his team up in a 5-3-2. This time the shape was much less fluid, and the team often only attacked with three to four players. However, the communication, defensive shifting and overall stability of the middle and back lines was immensely improved, even over the Atlanta United match less than a week before.

Below, you can see FC Cincinnati set up to clog the middle and were content to give the Red Bulls space on the touchline in the middle third of the field (blue highlight). All five members of the backline are closely monitoring a New York attacker. 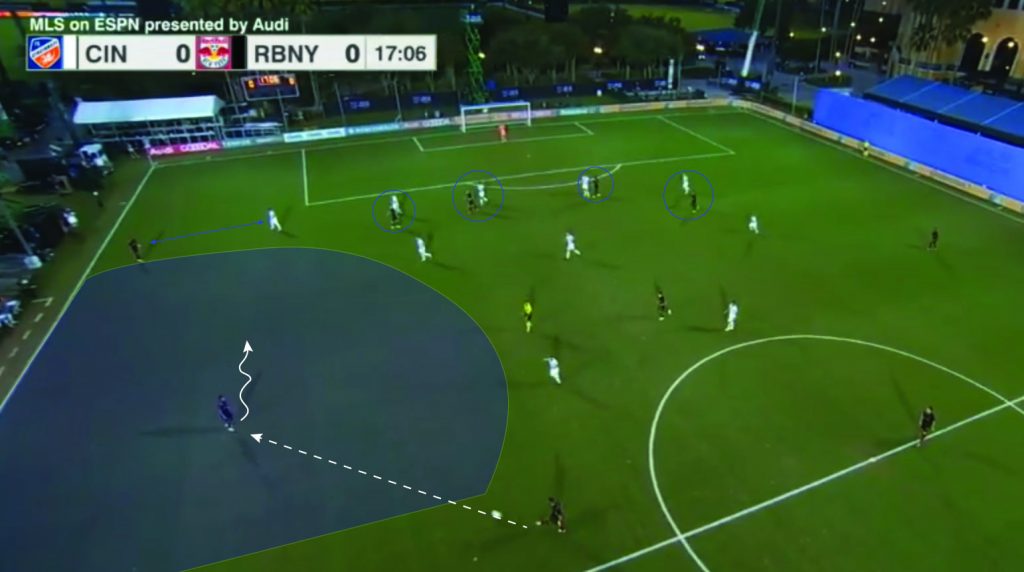 As the Red Bulls outside back dribbles the ball forward, the midfield adjusts to apply pressure to the ball (blue arrows). In an attempt to create confusion, New York midfielder Kaku makes a run to the wing, and the wide player tries to run in behind the FCC defense. Mathieu Deplagne (yellow) and Joseph-Claude Gyau (green) switch marks, accounting for both players seamlessly. The rest of the backline remains attentive. 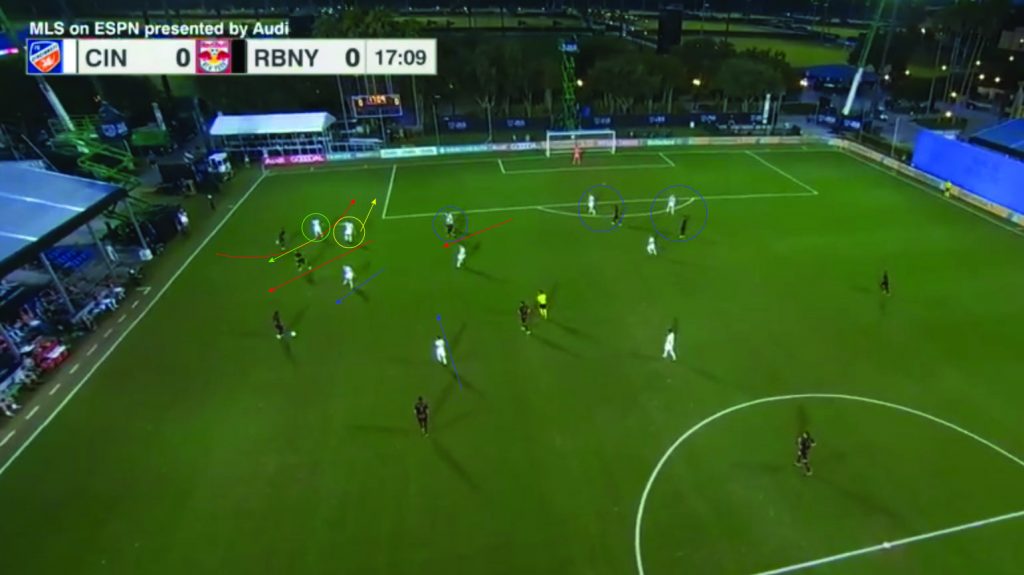 With no room to play in behind, the Red Bulls play a simple square ball into the midfield. Forward Daniel Royer checks to the ball, but Kendall Waston follows him tightly (blue circle). Haris Medunjanin closes down the ball and shifts to press it further inside. Deplagne has followed the runner (yellow) eliminating him as an option. 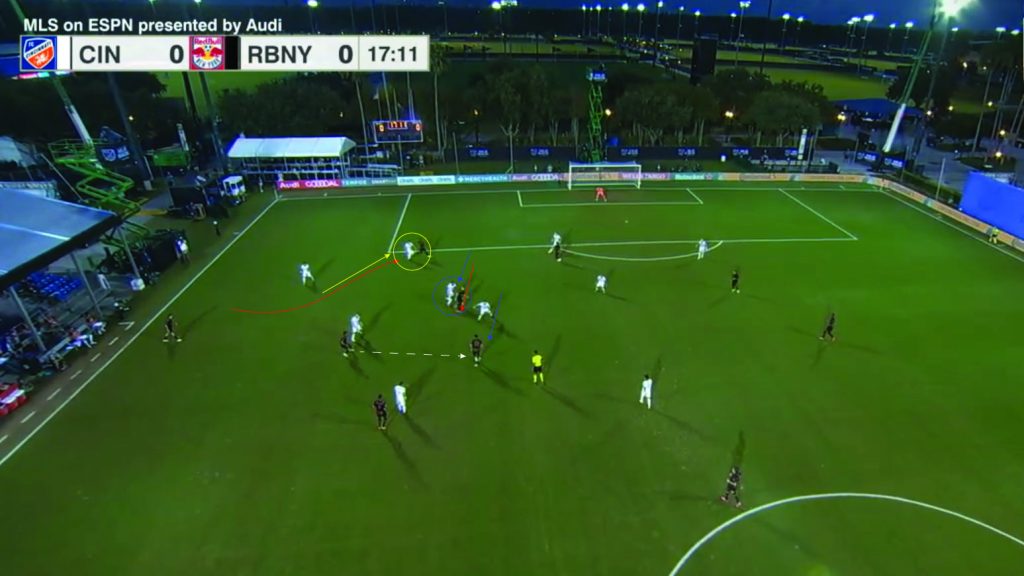 The ball is forced back where it came from, and Caleb Stanko immediately springs to pressure it, while Gyau closes down his mark on the touchline (blue arrows). 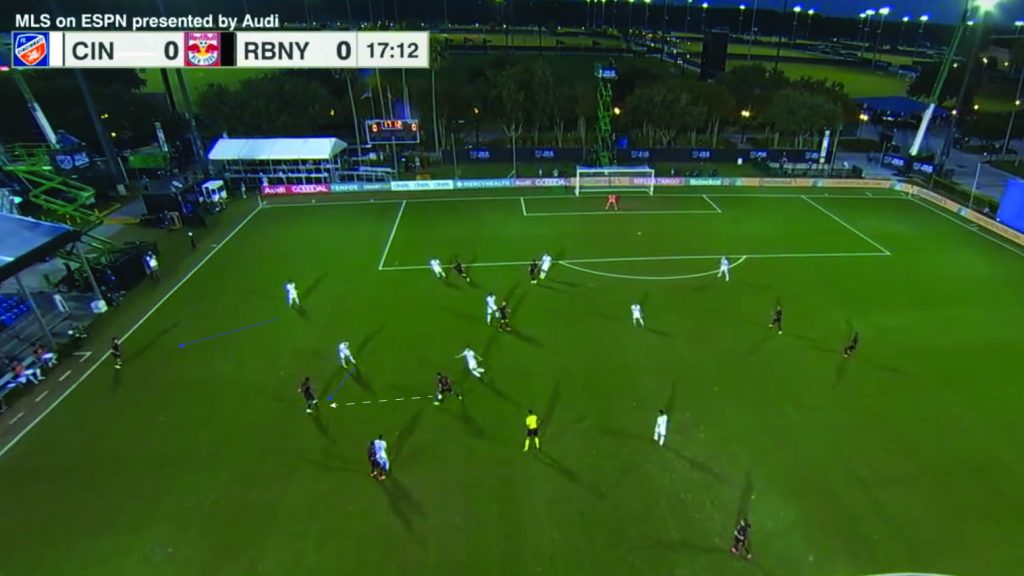 With the quick and decisive pressure, the rest of the FC Cincinnati team tightens up on its marks (blue circles). The Red Bulls try to force a pass inside and turn the ball over. 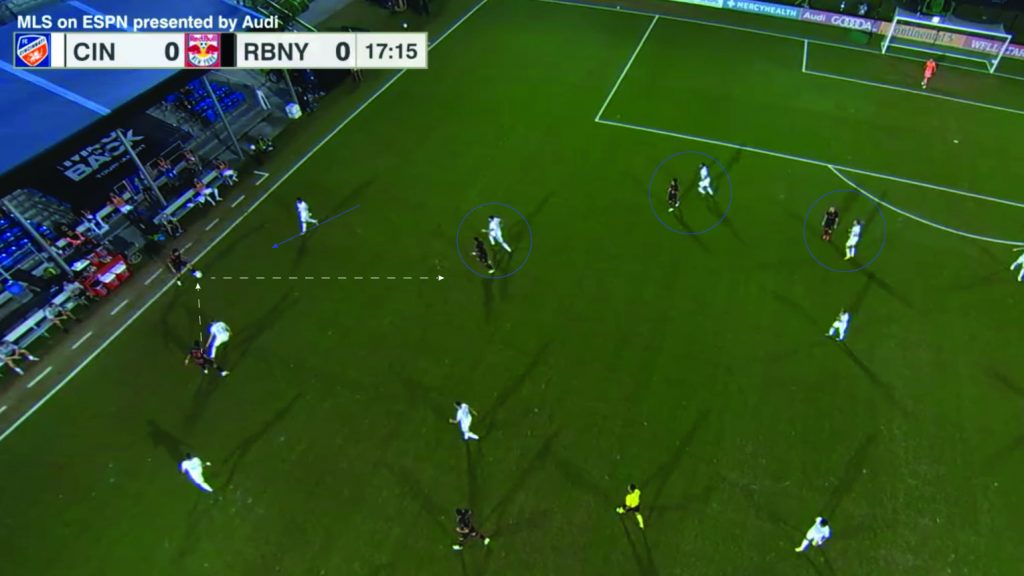 The sequence took only 15 seconds, but in each moment any of the FCC players failing to shift appropriately, pass runners or tighten up on their marks could have led to a Red Bulls opportunity. This sort of defensive excellence was maintained for most of the night, leaving New York with precious little space in the offensive third of the field.

Yuya Kubo’s goal began with an excellent spell of possession for FC Cincinnati. The ball pulled all the way from the right wing-back to Waston, who shifted it left to Tom Pettersson. As the New York Red Bulls defense shifted to the ball side of the field (red arrows), Adrien Regattin (blue highlight) allows the center back to move away, staying in the space left behind. With Frankie Amaya checking toward the ball on the touchline, the Red Bulls pressing player slides outside to block off the pass, opening up a window for Pettersson to find Andrew Gutman. 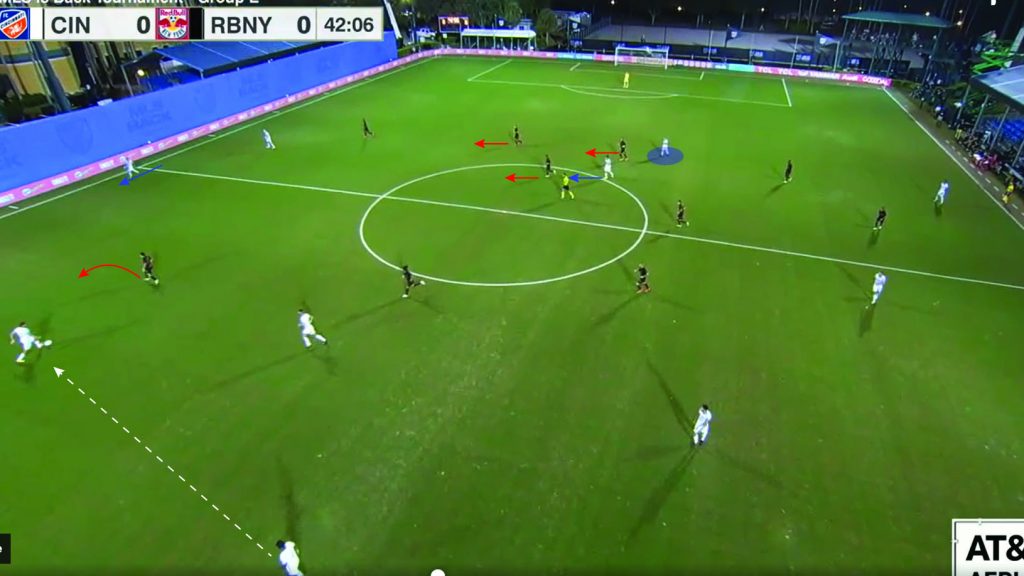 As Gutman receives the ball, the Red Bull defenders shift even further. Regattin remains in the space created, and Kubo (green) takes up a position between the New York back and middle lines. 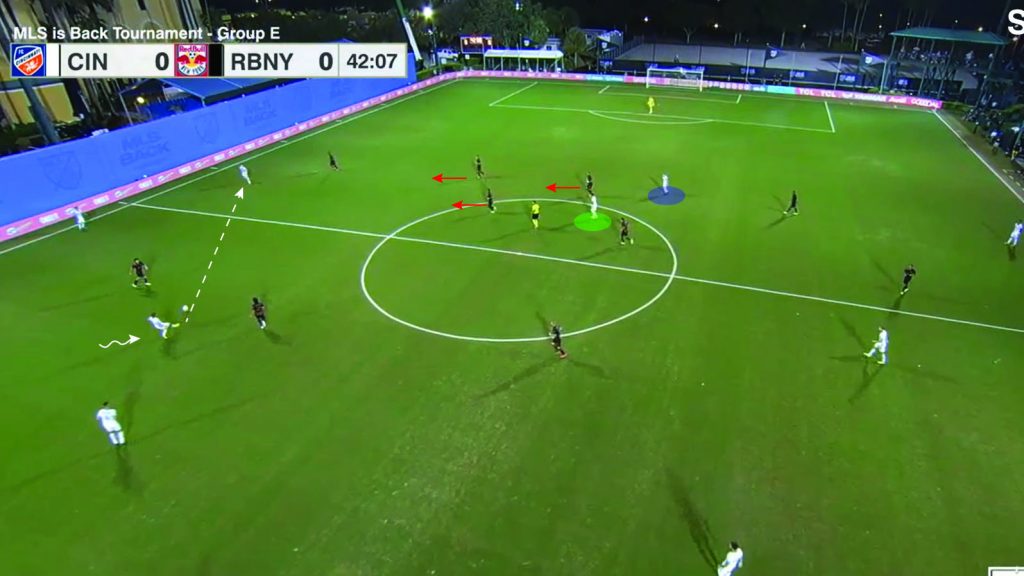 Gutman turns, and with a bit of time spots the run of Regattin into the space behind the defense. Kubo tracks the ball, remaining between the defensive lines. 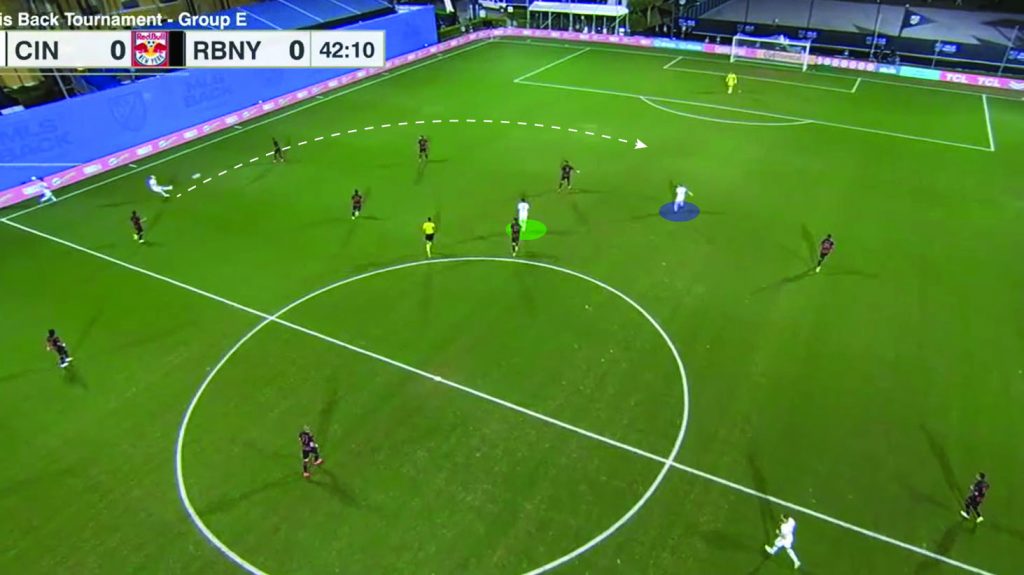 Because Regattin had stayed in the space that Amro Tarek had vacated, the Red Bulls center back was unsure of his position and forced to make a last-ditch stab at clearing Gutman’s cross. He made poor contact, and Kubo, still between the lines, was the first to the ball. 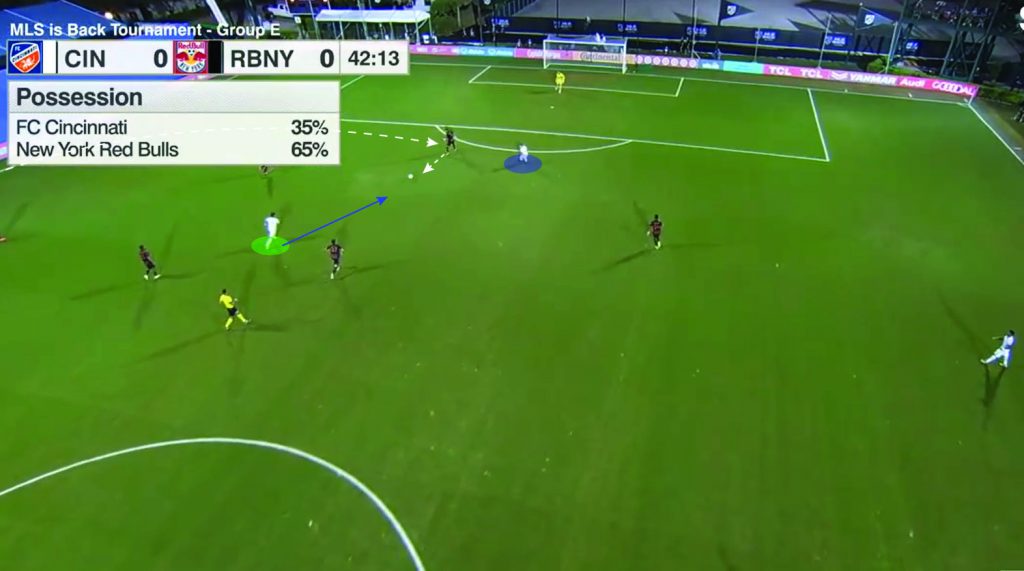 Regattin continued to peel his run away from Tarek, who shifted his body that way, anticipating a pass from Kubo. This gave the Japanese international the space he needed to unleash a shot to the near post. 1-0 FC Cincinnati. 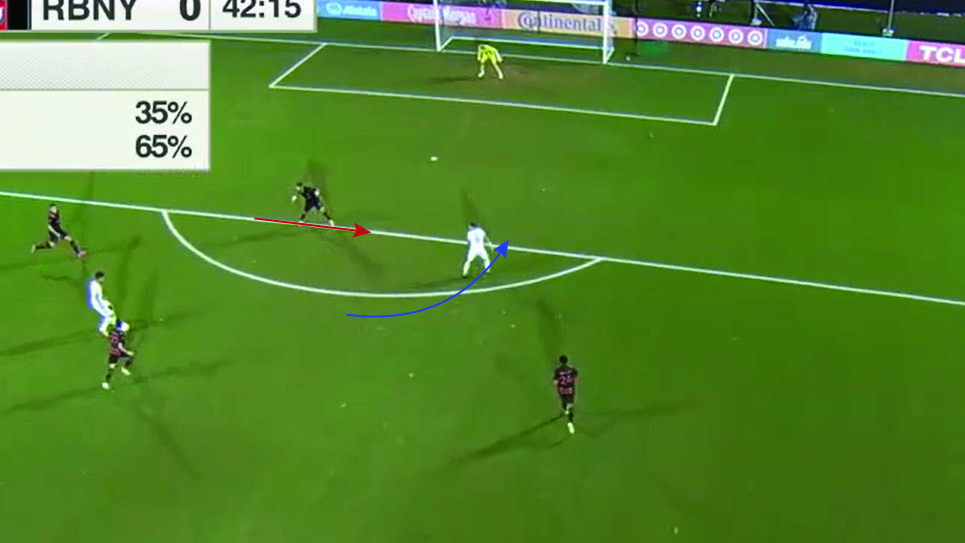 56′ Own Goal, created by a cross from Haris Medunjanin

Early in the second half, Gyau used his excellent acceleration to earn a corner, which Medunjanin moved over to take. FC Cincinnati had four players in front of Red Bulls goalkeeper David Jensen, with three of them forming a shield to ensure he wasn’t able to move forward within his box. Florian Valot took up a position toward the top of the 6-yard box, giving Medunjanin a target window to whip the service into. 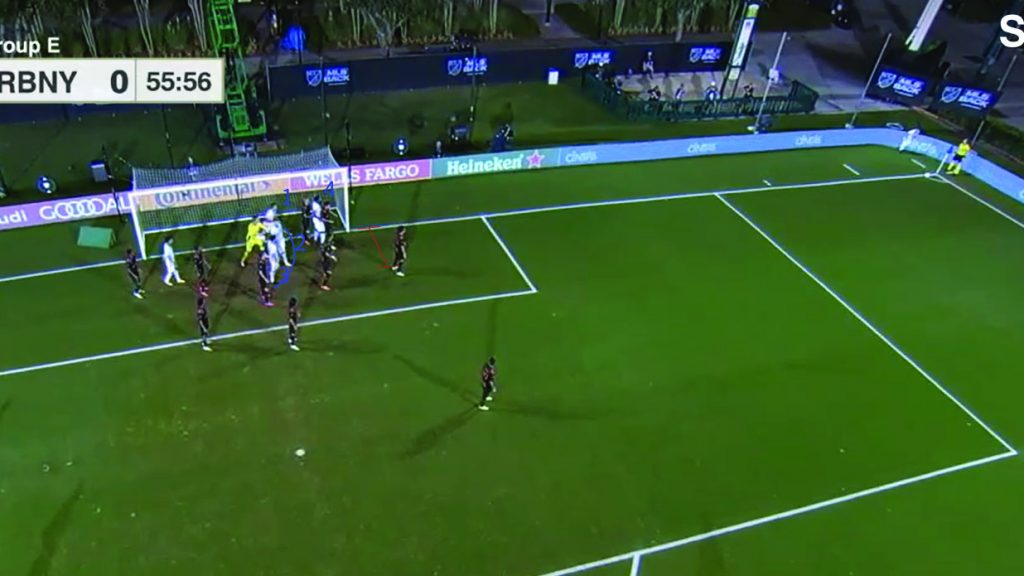 As the ball is whipped in, Jenson is so concerned with pushing Stanko out of his way he is out of position, a full yard from his goal line, and not ready to make a save. 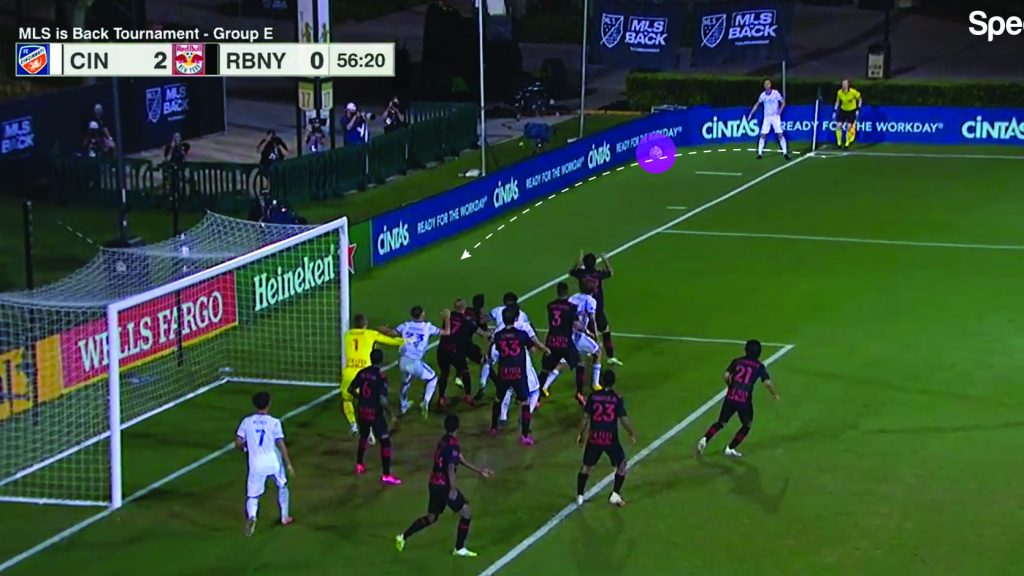 Any time a team gets the benefit of an own goal scored by the opposition, they can count themselves as lucky. However, the view from the goal post cam shows just how out of position Jenson was — a fact that Medunjanin said afterward that the team had scouted and was planning on. 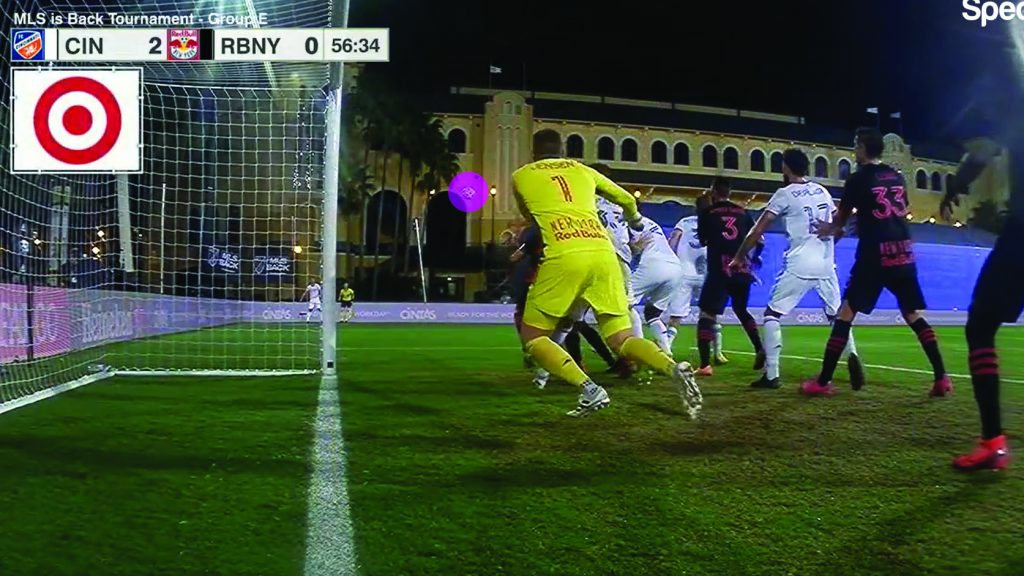 Very few people expected FC Cincinnati to beat the New York Red Bulls on Wednesday. Even fewer expected them to advance to the knockout round of the tournament. Stam showed an ability to adjust his team and get them playing outstanding defense over the course of its time in Orlando, earning two clean sheets.

The shots that New York put on goal late in the match, forcing Przemyslaw Tyton to make some big saves, came immediately following corner kicks. The first was taken quickly by New York, catching FCC transitioning to their corner kick defense, leaving the weak side of the field open. The second saw a ball bouncing around the box after a corner and Siem de Jong leaving his mark attempting to cheat out on the counter.

This shows that FC Cincinnati’s game plan worked. They will be content to allow the opponent 19 shots so long as few of them are on target or from close range. This also shows, however, that small mental lapses can turn a game on its head. Stam still has some work to do in this regard.

Tune into the latest Talking Tactics with Coach Gough Podcast as Brad breaks down the FC Cincinnati win over Atlanta United! And, look for the next episode on your favorite podcast network each Monday!