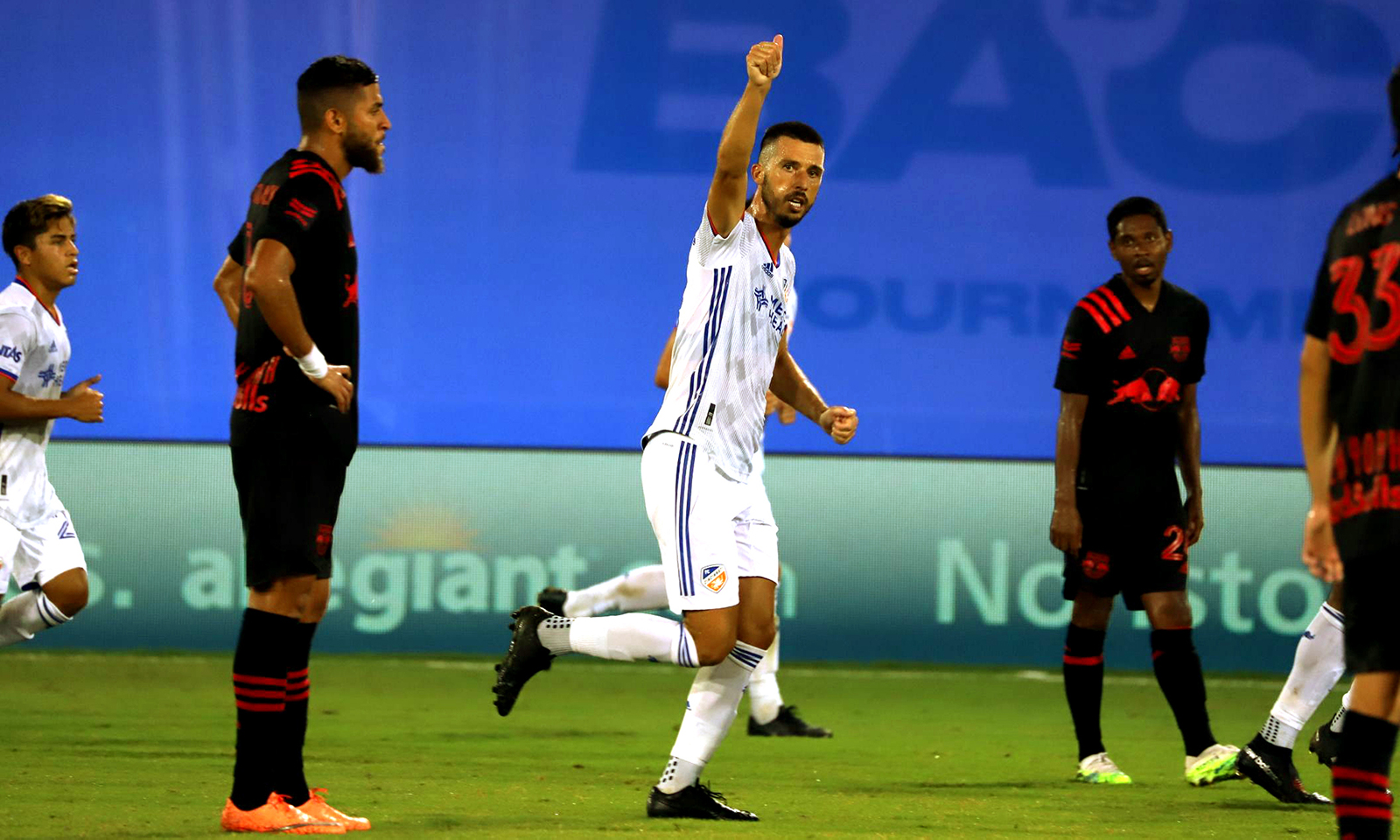 The Orange and Blue finish second in Group E, move to Round of 16 in MLS is Back Tournament after a 2-0 win Wednesday over the New York Red Bulls.

FC Cincinnati has shocked the MLS is Back Tournament by defeating the New York Red Bulls 2-0 on Wednesday to advance to the knockout round. With the win, the Orange and Blue will face the winner of Group F at 10:30 p.m. Tuesday. The opponent will be determined by Thursday night’s Portland Timbers-Los Angeles FC outcome.

Following the surprise defeat against Atlanta United last week, FCC head coach Jaap Stam stuck with the same defensive formation and tactics and found success once again. While FCC didn’t create many opportunities on offense, it kept New York frustrated on its way to a second straight clean sheet.

“By getting to know your players and the team as well, you’re always looking at the coach,” Stam said via videoconference after his second straight win in charge of Cincinnati.

“What’s for now the best way to maybe play and that gives us that little bit of success as well then, hopefully, from that success gives us the confidence and then we can start building from there. That’s what we’re trying to do. You know the guys, they picked it up very well. The players are very positive. Everybody wants to play, which is very good. They’re sticking together, there’s communication, the work rate’s there, they’re patient at times as well, which you need to be against these teams that we’re playing. I think everybody saw the work that’s been put in with the team, with the players, it’s looking promising.”

Both teams entered this matchup desperate for a result. A win would guarantee a spot in the next round, but even a draw would set them up for a good chance to advance. The New York Red Bulls (now 1-2-0 with three points in group play) had the same record as FC Cincinnati (now 2-1-0 with six points) during the tournament but had the advantage on goal differential. For all intents and purposes, the match was do or die.

Much has been said and written about the Red Bulls’ press, but Stam set up his men behind the ball and conceded possession. With the ball at its feet, and their counter-attack stifled, New York was unable to break down the FCC defense. While New York registered 68% of possession and 19 shots, they only  placed four of those shots on target, all saved by starting goalkeeper Przemyslaw Tyton.

“Today’s game was very important for us. We knew before the game that we need to get points and I don’t think anyone from the group even thought of (a) draw,” Tyton said after the match via videoconference. “We want to win the game. After winning the game against Atlanta (United FC), we trained hard during the next days and we knew we can continue to grow up. And, we did it today…I thought we played good as a team, played very compact, and we didn’t give up anything. So, I am really proud of the team and happy.”

Cincinnati’s defense was tested immediately as New York tried to take advantage of its time on the ball, only applying pressure when Red Bulls attackers made it close to the FCC penalty box. But Frankie Amaya recorded the club’s first shot in the 19th minute, showing a willingness to take chances earlier than they did against Atlanta United.

The Orange and Blue continued to give New York the ball to attack and were lucky to see them miss a few key chances in the first half. Following a corner by the Red Bulls, left wing-back Andrew Gutman regained possession with a well-timed slide tackle. Recovering quickly, Gutman dribbled the ball upfield and unlocked a counterattack. After an initial errant cross upfield, Yuya Kubo captured the ball and dribbled toward the penalty box. Thanks to a run by Adrien Regattin, Kubo had the space to unleash a shot which bounced past the Red Bulls goalkeeper, giving FCC a one-goal lead before halftime.

Coming back from the break, Stam stuck with his game plan and let New York continue dominating possession, and they kept failing to take advantage. Twelve minutes into the second half, on an FCC corner kick, Haris Medunjanin’s cross was flicked towards goal by Red Bulls midfielder Florian Valot and slipped through the goalkeeper’s hands for an own goal. FC Cincinnati found itself leading by two goals.

The Orange and Blue stuck to their guns and stayed disciplined throughout the second half. Both New York and Cincinnati made use of all five substitutions, but the game didn’t change much. In the end, FCC held on to win the game to guarantee itself a spot in the next round of the MLS is Back Tournament.

“The last season for Cincinnati was a difficult season. Now, when you start to win, you start to believe in each other,” Medunjanin said in a post-match videoconference. “When you win, you have a positive team. But you need to do it together. Not only 11 players, everybody in the squad is important. We have a couple players that are injured and still we can be better and better. I’m looking forward to the knockout stage and we can prove the MLS that they can count on us.”