Disregarded by many after the opening match of the tournament, FC Cincinnati punched its ticket into the knockout round of the MLS is Back tournament with a 2-0 win over the New York Red Bulls. Yuya Kubo put the Orange & Blue on the board in the 43rd minute, capitalizing off a Red Bulls turnover, firing a shot from outside the box past a diving David Jensen. A Haris Medunjanin corner was headed into the net by New York attacker Florian Valot for an own goal in the 56th minute to cap things off. With the win, FC Cincinnati finishes second in Group E and faces the winner of Group F at 10:30 p.m. Tuesday. Group F will be decided Thursday night as the Portland Timbers (six points) square off against Los Angeles FC (four pts.).

With FC Cincinnati sitting back and conceding the ball to New York, Tyton came under an onslaught of 19 shots, four of which were on target. He kept his second clean sheet of the tournament, making three crucial saves after the 81st minute. My favorite came in the 82nd minute where he made a tremendous diving save on a ball drilled through traffic by Sean Davis. I would have to caution Tyton to be more careful with his distribution (34.1%). Playing without a true forward with Jurgen Locadia injured to bring the ball down on his clearances is one thing, but he made a few risky passes conceding possession right back to the Red Bulls. Atlanta United and New York didn’t have anybody to make him pay the last two matches, but a potential match against LAFC and a ruthless player like Diego Rossi won’t be as forgiving.

Alright, I’m holding my hand up saying I was wrong about Gutman’s defensive abilities. For the second match in a row, he put an attacking right back in his pocket. Kyle Duncan had little to no effect overlapping the midfield to create opportunities. On the offensive side of the ball, Gutman did a nice job picking his moments going forward without exposing the backline. His endless energy showed with his slide tackle to win the ball and then quickly springing the attack helping lead to Kubo’s goal.

Seven interceptions! Yes, you read that right. What I’ve noticed early from the big Swede are his positioning and anticipation. While some may see him as a quiet figure next to Kendall Waston, he was constantly in the right place at the right time when the backline came under threat.

Man of the match for me. Since the move to a back five with Waston in the middle of the three center-backs, the Costa Rican international has looked a new player. He has midfield protection in front of him, so his job has turned into winning his 8 yards of space and win every ball in the air. Let’s take a look at the Opta Chalkboard from the match. The Red Bulls could not find a way through the defense led by Waston’s 11 clearances. Waston kept the backline tight, forcing the Red Bulls to make an astounding 51 crosses into the box. Coach Jaap Stam’s setup played perfectly into Cincinnati’s hands as New York, without a true striker, didn’t have a chance to win the ball. 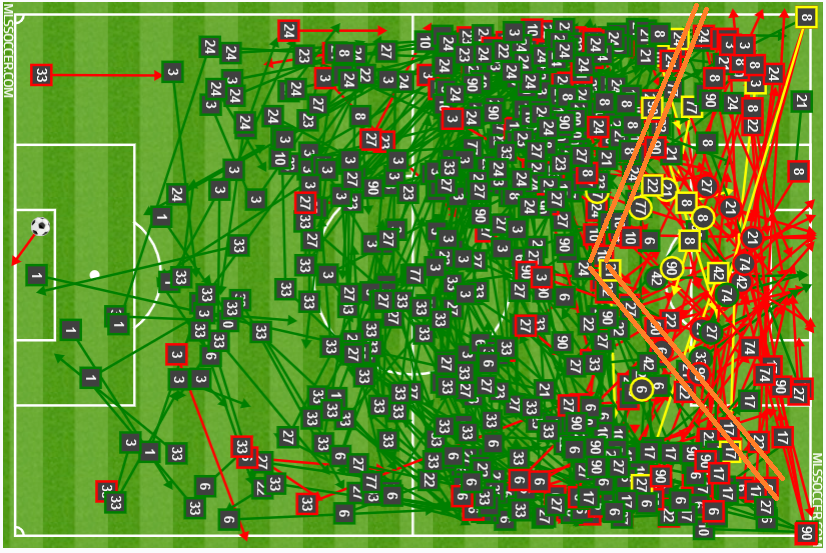 Settling nicely into that right CB role. I like his partnership with Joseph-Claude Gyau/Caleb Stanko, as Deplagne is just fast enough to help cover a bit more ground than a traditional CB. I’ll have said this several times this article but you can see players like Deplagne, Pettersson and Medunjanin looking to break out that incisive pass to build the attack. While Adrien Regattin isn’t the hold-up player Locadia is, you can see the pieces that start to build the groundwork of an attack when Locadia returns.

It was tougher for Gyau to get into attack Wednesday because the Red Bulls sent a lot of their attack up his side of the pitch. He did a nice job diagnosing runs while carefully selecting his chances to get forward. FC Cincinnati never was fully able to relieve enough pressure for Gyau to get uninterrupted one-on-one time on the ball. In one of his few opportunities, he caused the pressure to earn the corner for FC Cincinnati that netted the second goal for the club.

I think FC Cincinnati might have found their replacement for moments of brilliance from the dead-ball spot. His 56th-minute cross was whipped into the perfect spot that forces mistakes from opponents. He called it out in his post-match videoconference that he was able to study the Red Bull defense and delivered a ball with surgical precision. The 3-5-2 without a striker doesn’t necessarily suit Medunjanin, as he is unable to pick out a player like Locadia on an incisive pass, but he played well and gave the back three cover sitting slightly in front of the defense.

Nice defensive cover. Stanko helped as an outlet for Gyau to relieve pressure on the right-hand side. He again played well but not spectacularly. He’s not going to break anybody down with precise passing or speed, but he shouldn’t be as prone to mistakes. I liked having his steady influence ahead of Gyau to provide support and cover in case Gyau got too high up the field.

Amaya admitted that it was not his best match, but it wasn’t his worst either. His ability to win tackles and help keep possession will benefit the club even on his “off” nights. I think the heat and conditioning played a part in his performance. With his work rate, it is just flat out difficult to keep up consistently this early in the season. The grade might be a bit hard, but he gets a six because he had just one true positive pass. He was just 11 of 22 and was unable to create anything going forward. I think he’s going to continue to be a star for the club, but I think his impact was less than his last four appearances.

One shot … one goal … the Nati … the Nati! And what a shot it was from Yuya Kubo. After a 40-minute spell where Cincinnati was constantly under pressure, Kubo took advantage of an Amro Tarek mistake to give FC Cincinnati fans a chance to exhale. Through five matches, Kubo has two high-quality goals that came from pretty much nothing. Sitting back and “parking the bus”, FC Cincinnati won’t have many offensive chances, so it’s critical that one of the few offensive creators for the Orange & Blue capitalize when they can. Too often in 2019, the club missed these chances, so it’s great to see and a positive sign going forward.

Again, it’s tough to grade Regattin because he’s a short winger tasked to hold up the ball, and it just doesn’t work well. You can see when he gets the ball on the wing he is dangerous with his footwork. The guy just busts his butt every chance he is on the field, and I can’t wait to see him in his natural position.

Siem de Jong returned after picking up a knock against Columbus. It had to be a tough position for him because by that point FC Cincinnati was up two goals and selling out to play defense. He and Brandon Vazquez couldn’t get on the same page, making both ineffective. The positive side is he’s healthy, but the negative side — I don’t see where he fits.

Vazquez looks like a player who is pressing to make an impact. The effort is there, but the touch and speed weren’t. Very little impact to help the club relieve the pressure they were under.

The Cincinnati native came in for Waston, who looked to have been out with cramping.

Came in at RWB for Gyau to shut down the match.

All FC Cincinnati players, coaches and staff have tested negative for coronavirus.