Brad Gough breaks down the key moments in FC Cincinnati’s 1-0 victory Thursday over Atlanta United in MLS is Back Tournament group play.

FC Cincinnati earned its first win of this crazy season Thursday, defeating Atlanta United by the score of 1-0. Atlanta went down to 10 men in the 26th minute when Jake Mulraney brought down Joseph-Claude Gyau. Here is a tactical breakdown of key moments in the match, including the 76th-minute winner from Frankie Amaya.

Coach Jaap Stam showed his tactical flexibility by rolling out the team in a conservative 5-3-2 formation, that shifted to a modified 3-3-4 going forward. 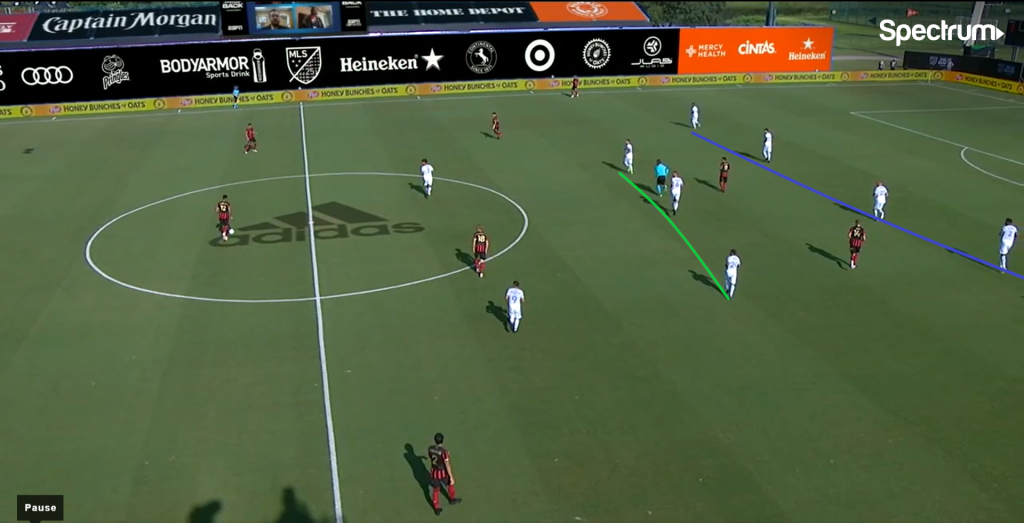 This set up allowed FC Cincinnati to put 11 players behind the ball in three distinct lines as seen above. It tried to remain compact and simply didn’t let Atlanta United have space to work in the final third.

Not only did this effectively stifle the Atlanta attack by allowing the Orange and Blue to match up man for man as it possessed the ball, but it also provided extra players in the channels — the parts of the pitch where Atlanta United likes to run Ezekial Barco and Gonzalo “Pity” Martinez (yellow highlights). 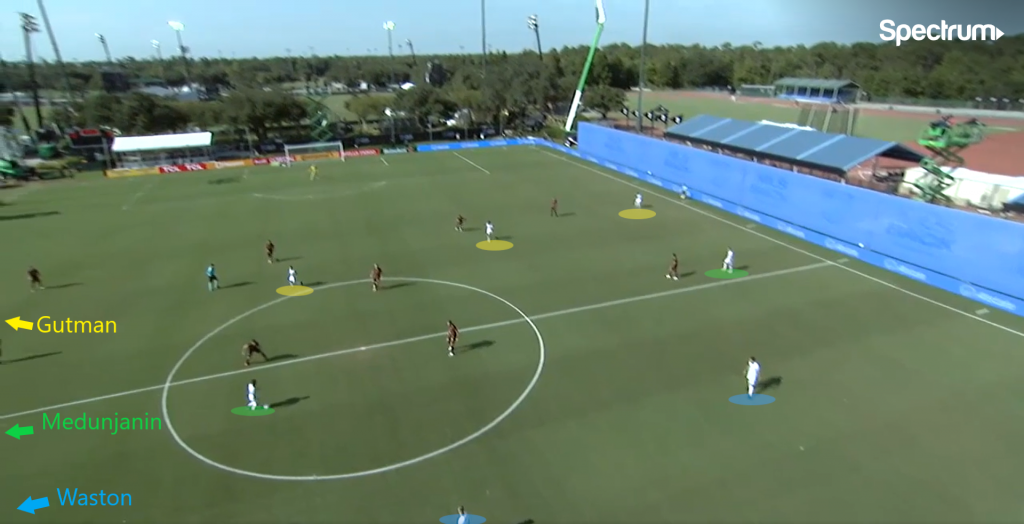 When FC Cincinnati had possession, Stam really showed his tactical nous. The team shifted into a sort of 3-3-4 that allowed them to swing the ball around the back while looking to probe the Atlanta defense on the wings. This had the added benefit of occupying both the Atlanta outside center backs and wing backs. Kendall Waston, Maikel van der Werff and Mathieu Deplagne manned the backline (blue highlights), Haris Medunjanin, Amaya and Caleb Stanko spread out into a flat midfield three (green highlights), and Gyau and Andrew Gutman pushed all the way up the field to join the forward line (yellow highlights).

This tactical setup going forward led directly to the turning point of the match — the red card issued to Mulraney in the 26th minute. 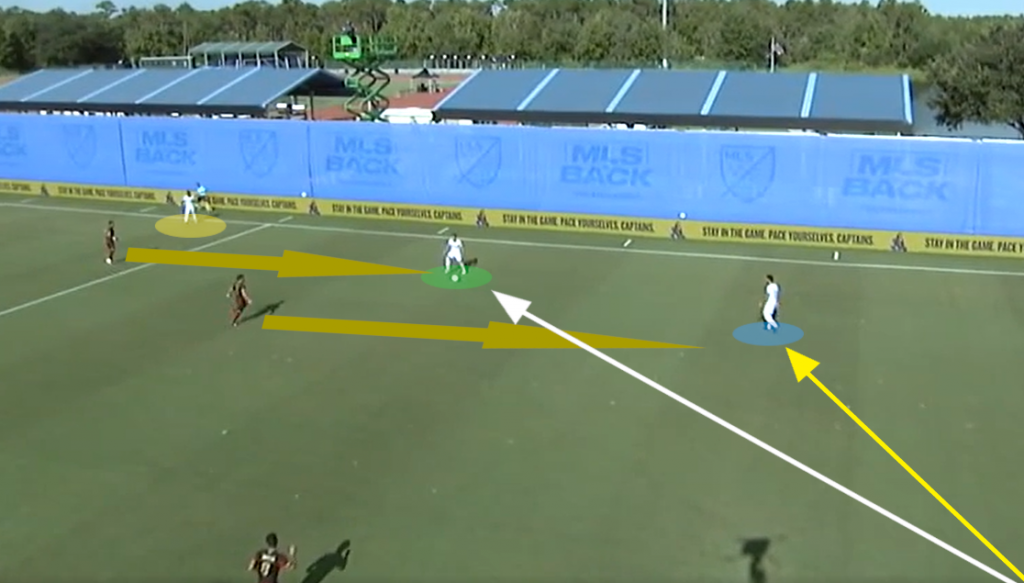 With Deplagne pushed out as a right-center back (blue highlight), Stanko pushed out as a wide right midfielder (green highlight) and Gyau in the right wing position (yellow highlight), the Atlanta defense was outnumbered 3-2 on the right side of the pitch. Van der Werff played the ball from the center of the pitch to Stanko on the right. As he did so, the Atlanta left-wing and wingback hesitated in closing down their opponents, waiting for the ball to be played to Deplagne, in which case they both would have moved forward to press (yellow arrows), and their left center back would have slid over and assumed responsibility for Gyau.

This hesitation allowed Gyau to run in behind Mulraney. Stanko played a nice ball down the line, and the speedy winger did the rest using his strength to shrug off Mulraney’s challenge until the wing-back eventually dragged him to the ground, earning his second yellow card of the match and leaving his team down to 10 men.

In first-half stoppage time the FC Cincinnati faithful received a scare as Barco got free down the left wing and was brought down in the box. 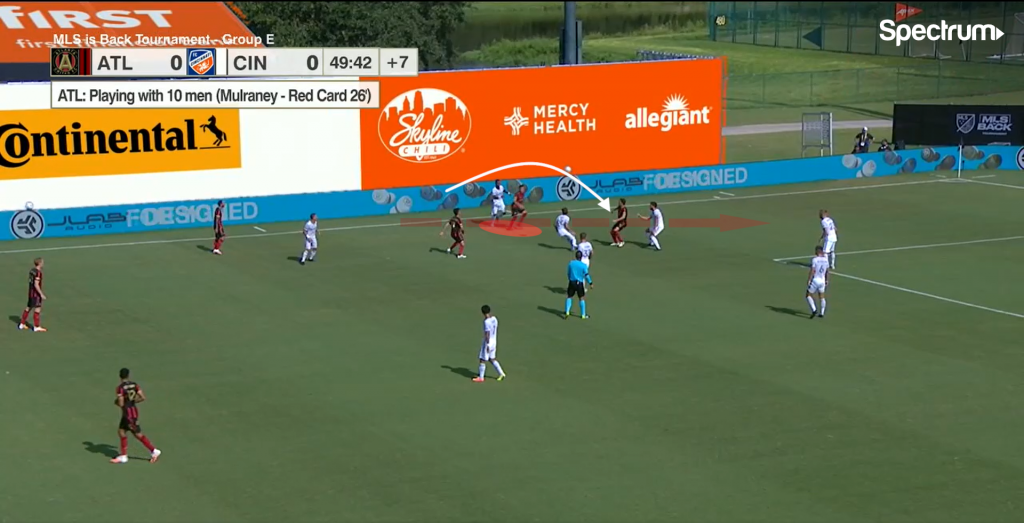 The play started with an Atlanta United throw-in, taken by Barco. After throwing the ball into Adam Jahn, Barco continued to make a run down the sideline, and Gyau failed to follow him (red highlight). 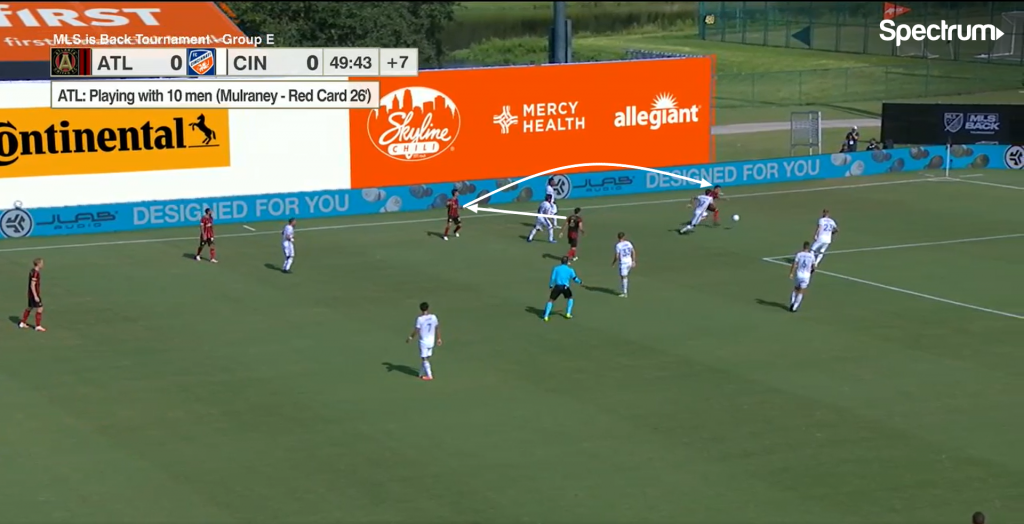 Jahn knocked the ball toward Martinez, who one-touched the ball into Barco’s path. Deplagne wasn’t quite alert to the danger and was a step behind Barco as the speedy Argentine got in behind the FCC defense. 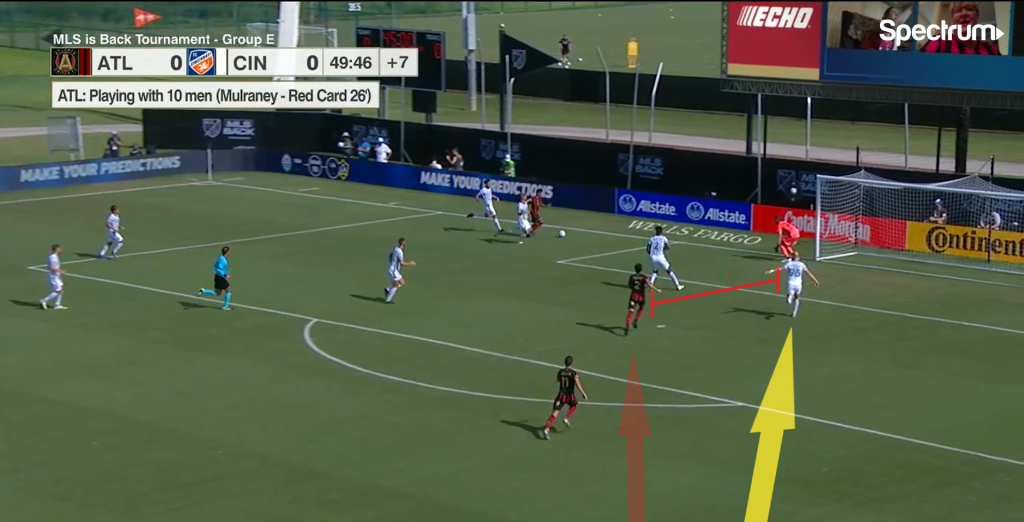 The defense in the box on this run was less than ideal. Waston moved to cut off the cut back but remained facing his own goal, unaware of any approaching runners. Gutman fell in toward the net, leaving his park to make a central run for a potential cross. And, worst of all, van der Werff went to ground unnecessarily in an attempt to tackle Barco, catching him with his trailing leg and causing the referee to point to the spot.

But for a marginal offside call, ruled on by VAR, the match could have been 1-0 to Atlanta United.

The Orange and Blue were ponderous in attack, even up a man. Nonetheless, they nearly took a lead when Gyau slipped Yuya Kubo in for a shot on goal. 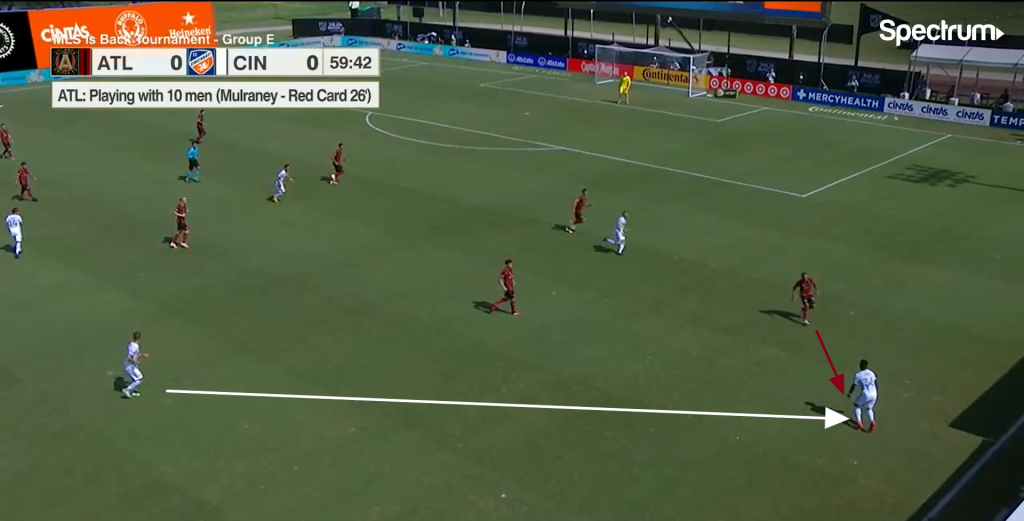 Possessing the ball at the edge of the attacking third, the FC Cincinnati midfield shifted the ball to Gyau, who had been its most dangerous looking player to that point. The Atlanta left wing-back moved to close him down. 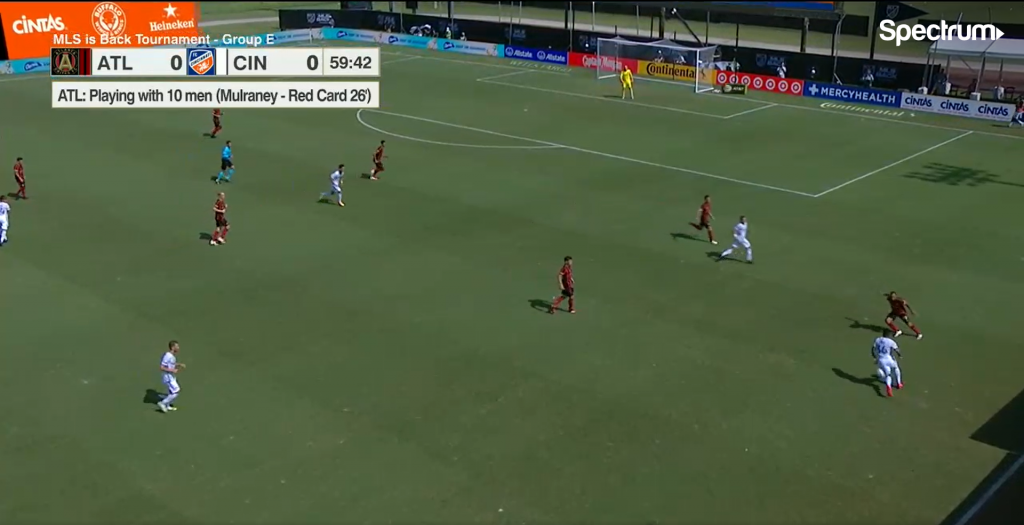 Adrien Regattin made a very smart run to the corner, dragging the Atlanta center back out of position and causing the wing back to slide and show Gyau inside. 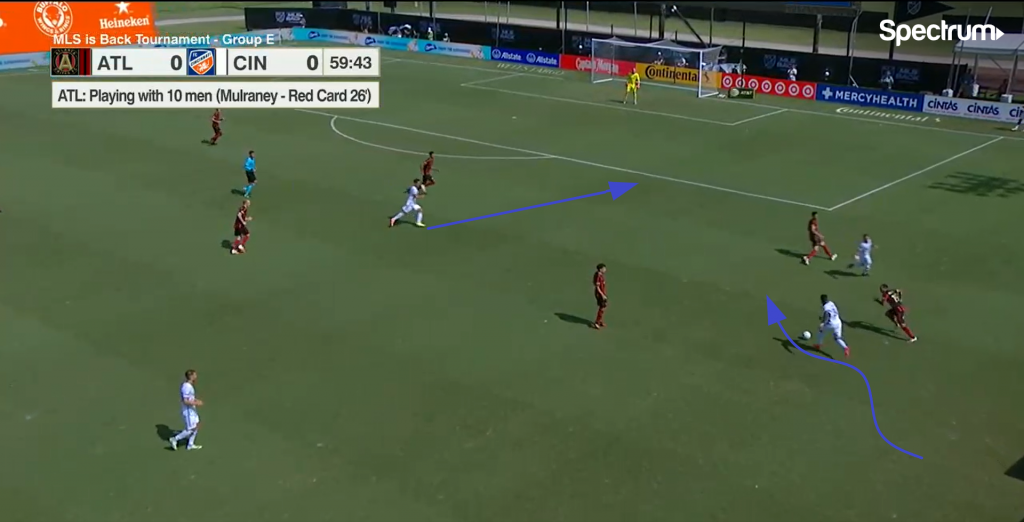 Gyau used his great acceleration to burst inside of his defender, and Kubo continued his run into the gulf left by Regattin pulling his defender wide. 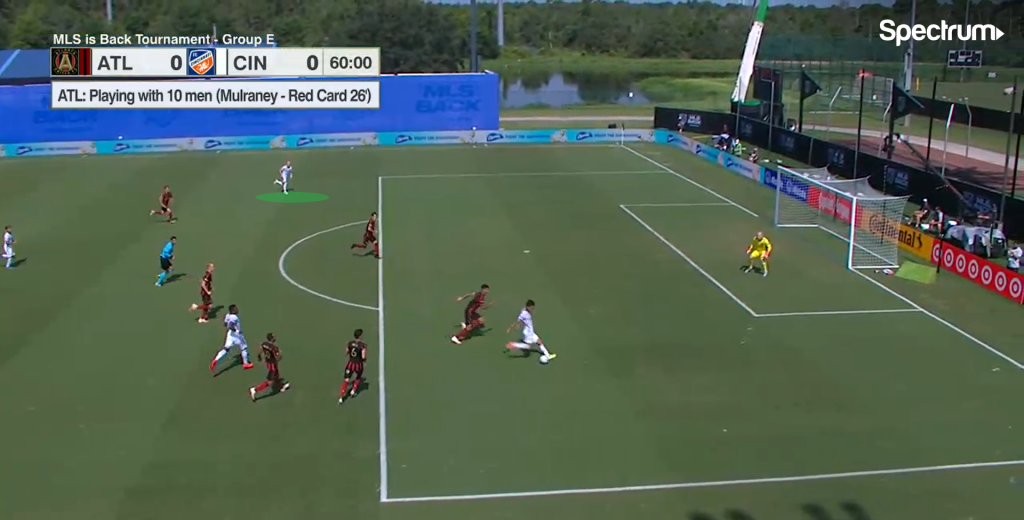 Gyau timed his slip pass perfectly, and Kubo had a yard of space to fire his near post shot. Brad Guzan made a great save to keep FCC scoreless. The move was excellent, and the only question is whether Gutman (green highlight) could have anticipated it better to have been available at the back post for a Kubo cross.

The Orange and Blue struggled through much of the match, unable to gain penetration between the Five Stripes lines. However, on the 76th minute, they did just that. 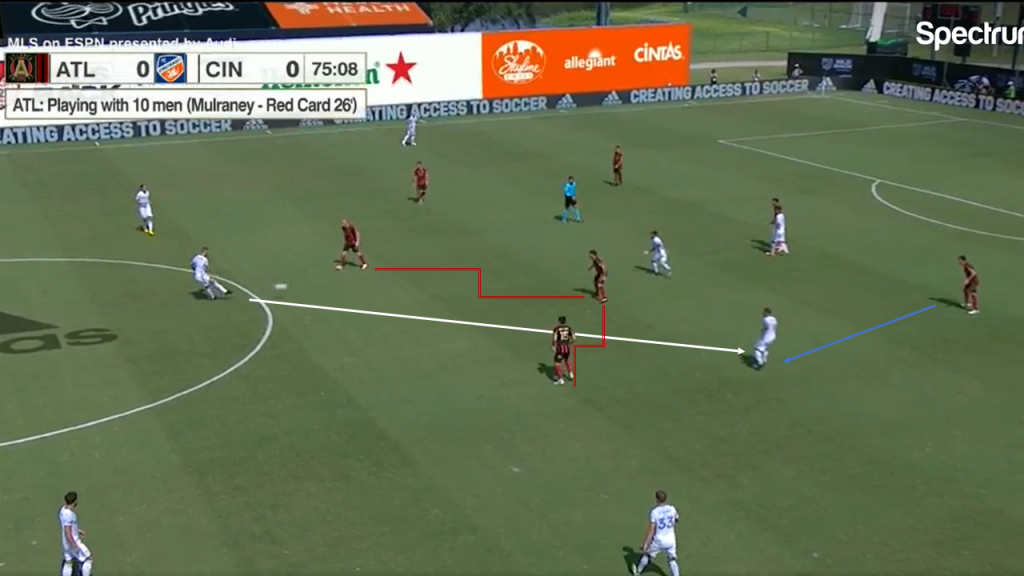 The move started with Regattin checking off the backline into a window between two Atlanta midfielders. Medunjanin fired a pass into his feet. 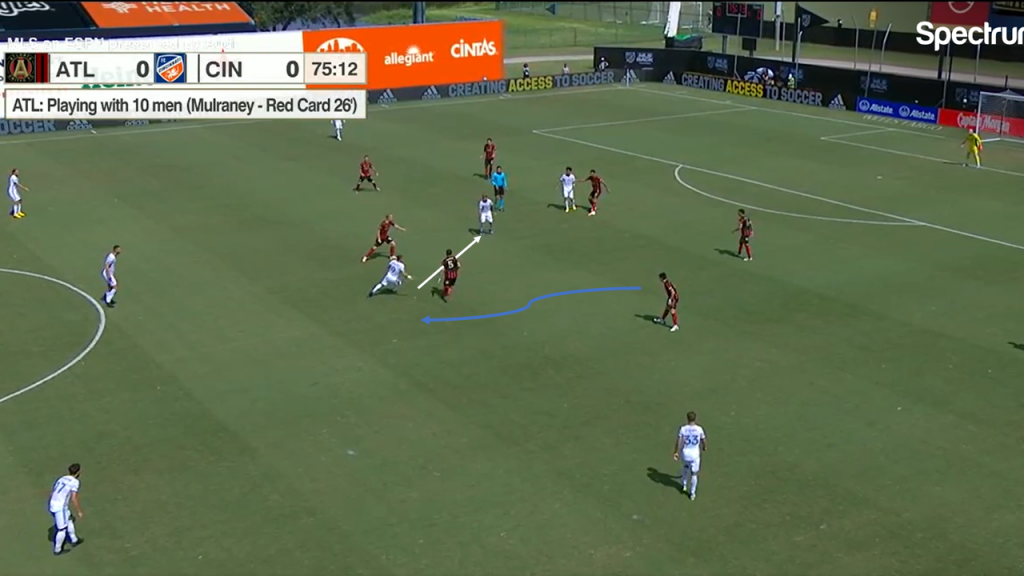 The pass forced Atlanta’s midfielders to turn and find the ball. Regattin’s first touch took him back in front of the line, but the midfield was already scrambling. This allowed Regattin to slip the ball into Amaya, once again between the lines. 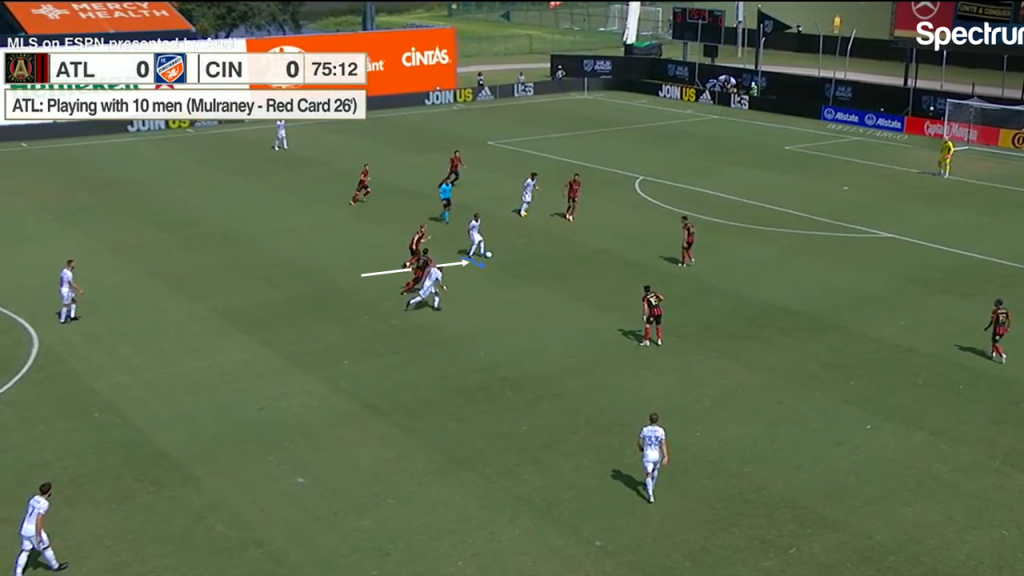 The young midfielder played expertly on the half turn, taking his first touch toward goal and putting the Atlanta midfielders on his hip. 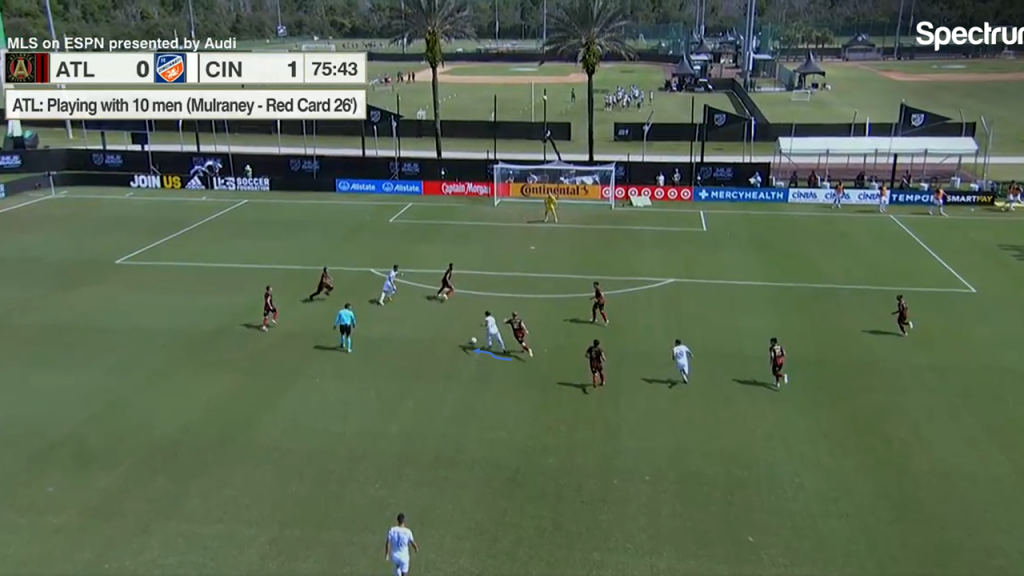 It seemed so simple, but Amaya shifting the ball to his left foot allowed him to avoid Jeff Larentowicz trying to nip back and poke the ball away. From there, he spotted Atlanta goalkeeper Brad Guzan off his line and struck a left-footed shot that dipped just under the crossbar. 1-0 to FC Cincinnati.

Stam showed tactical flexibility by his willingness to not just change formations from the 4-3-3 that he employed in his first match but also to shift personnel throughout the phases of play to keep the Atlanta defense off balance. This paid dividends in earning his team a man advantage and ultimately his first win.

Much of the match was slow and ponderous, with the Orange and Blue a bit floundering in possession, but they were tight at the back and limited Atlanta’s chances both before and after the red card. All-in-all it gives the team a much-needed foundation to build upon.

Tune into the latest Talking Tactics with Coach Gough Podcast as Brad breaks down the last match with special guest D.J. Switzer. Look for our new podcast on your favorite podcast network each week!