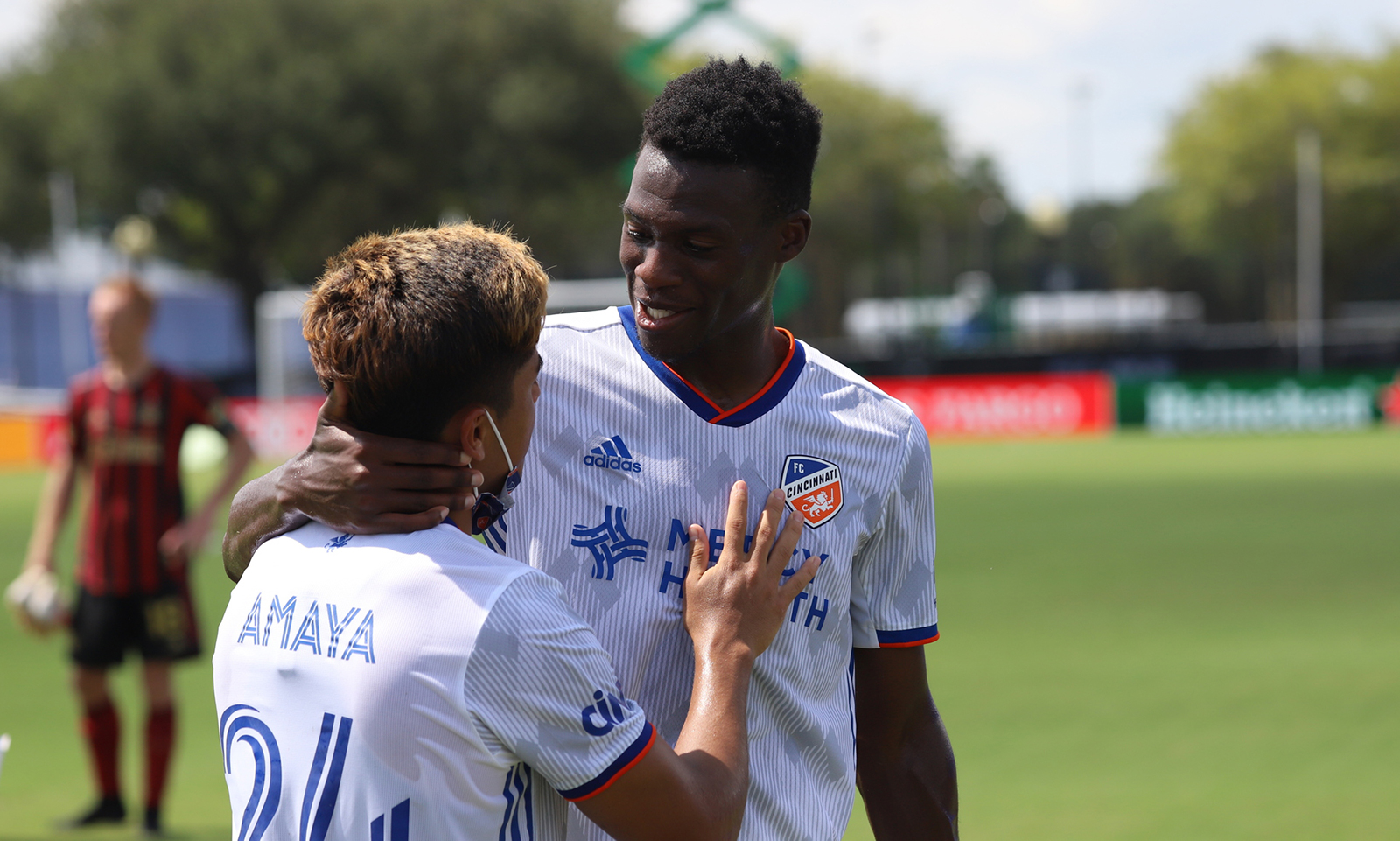 Behind Frankie Amaya’s 76th minute goal, FC Cincinnati defeated Atlanta United 1-0 Thursday in MLS is Back group play. The club is now in contention to reach the Round of 16.

FC Cincinnati is alive in the MLS is Back Tournament.

Playing in a defensive shell early even with a man-advantage, the Orange and Blue slowly began to be assertive in the second half of Thursday’s match with Atlanta United in tournament group play in Orlando, Florida. Midfielder Frankie Amaya finally struck with a left-footed, long-range goal in the 76th minute to give the club a 1-0 victory, its first under new coach Jaap Stam.

“I’m very excited, all glory to God,” Amaya said of his first MLS goal via videoconference. “But I’m more excited that we got a win and we’re staying in this tournament competing.”

FC Cincinnati (1-3-0 overall, 1-1-0 with three points in group play) bounces off the mat after a listless performance five days ago against rivals Columbus Crew SC. The club is now in contention to advance to the MLS is Back Tournament knockout round.

Atlanta United (2-2-0 overall, 0-2-0 with no points in group play) sinks to the bottom of the group. The top two finishers of each group and four of the six third-place finishers will move to the Round of 16. The Crew play the New York Red Bulls at 10:30 p.m. tonight. The winner — if there is one — will take firm command of the group entering the final matchday.

“This is huge for us,” said FC Cincinnati defender and captain Kendall Waston via videoconference. “To advance in the next round is important because we come with the mindset to qualify. We never go to any game thinking of losing, and winning always brings happiness. This is a great way to improve things and fix things.”

Stam broke from the standard 4-3-3 formation the club has been using for the last 14 months and started with a 3-5-2. FC Cincinnati was content to allow Atlanta possession for the first 25 minutes.

The game changed when Atlanta’s Jake Mulraney was sent off in the 26th minute after two clear yellow card offenses. Slowly but surely, FC Cincinnati began to climb out of its defensive shell.

Stam said when he arrived, he wanted to be able to toggle between the two formations from match to match.

“We need to be realistic in where we are as a team,” Stam said via videoconference. “If you play against one of the best teams in the league, you cannot think that we need to press high and we need to have a lot more possession or we need to create at least 10 chances. It’s never going to happen in soccer. So in our set-up I think we did very well. Eventually when you play against 10 men then yeah, you can keep the ball a little bit longer because they’re going to be dropping in.”

FC Cincinnati found itself in a dangerous position at the end of the half. Atlanta United earned a penalty kick after a foul on Maikel van der Werff in the box, but VAR overturned the decision, ruling the Five Stripes were offside on the play.

Joseph-Claude Gyau and Yuya Kubo provided FC Cincinnati with some second-half combination play with the club growing into the game in the final third. In the 60th minute, Gyau fed Kubo, but Atlanta United keeper Brad Guzan got a glove to Kubo’s near-post shot.

In the 76th minute, Amaya took a pass from Adrien Regattin, shifted left, took two touches and fired into the upper left corner of goal from 30 yards out. In the postgame video conference, a reporter asked Amaya if he thought it was the best goal of the tournament. Watson had an opinion.

Amaya made a quick impression on Stam during the Crew match, where positives were hard to find.

“After the first game, he was already one of the best players on the pitch for us,” Stam said. “And today he was very decisive for us as well in scoring his first goal. He’s got the ability to improve a lot more. He’s already doing well. The opposition on other teams are talking about him as well, we know that.

“Tactically he’s strong. He needs to take up his position to get him the ball going forward. Quality on the ball, that’s what he shows. He needs to keep it up. He’s a young player, he’s just starting. But he’s already at a certain level.”

Atlanta United lost another player to a red card in second-half stoppage time. J.J. Williams was sent off after giving a boot to Waston’s leg.

FC Cincinnati’s response after the loss to the Crew was exactly what Stam was looking for. Stam conceded he wasn’t quite sure what to expect from the early start time.

“We were quite afraid of how it was going to end up and work out,” he said. “Playing 9 in the morning, I’ve never played it. I don’t think you’re going to see it ever again ever anywhere in the world. It’s a difficult situation. We’ve been training a little bit earlier as well the last couple of days so hopefully the players got used to it. Today they woke up very fresh, very good, and they showed that on the pitch. But it’s not ideal for playing games.”