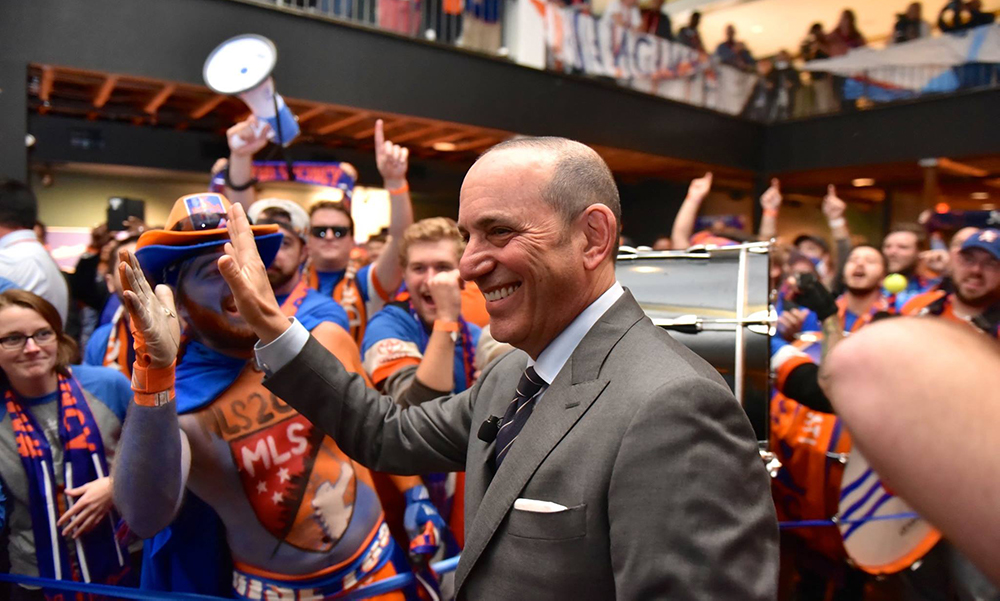 Clay Winstead has a tongue-in-cheek message to MLS commissioner Don Garber about the MLS is Back Tournament.

I’ll start with a confession. I had no clue MLS was considering a World Cup-style tournament when I suggested the idea on this website. Full disclosure, there was very little to write about in isolation and I needed something to do. It helped me kill an afternoon, but by the end I enjoyed imagining this fantasy tournament and was proud of my idea.

But not long after my suggestion was published I saw the reports that the idea was on the table. I was ecstatic! Who doesn’t love knockout soccer? And selfishly, I was looking forward to taking some of the credit. I didn’t expect any residuals or anything; I know I don’t own the idea of a tournament. But an executive producer credit? A brief mention in a press conference? It was the least you could’ve done.

Alas, I didn’t receive any acknowledgment. I can see why, Don — I can call you Don, right? Or do you prefer Donny? I like Donny. Because you clearly didn’t read my article! Very little of your “MLS is Back Tournament” took inspiration from my idea. And that disappointed me the most. I set you up. I gave you all these ideas for free. But you ignored me, and I think the tournament will suffer for it.

First and foremost, MLS is Back Tournament? That’s what you went with? I’m not saying the MLS Super Cup was a winner, but it’s certainly better than whatever that is. There’s only one explanation I could accept for such a name: You sent an internal memo asking for ideas on what to name “a tournament that will signal MLS is back,” and you’re marketing department didn’t see it in their inbox all week and only found it minutes before the end of business on Friday and freaked out and just combined the two phrases together. MLS is Back Tournament? C’mon Donny.

I’m willing to be the bigger man and forgive the name choice. If you literally called it the MLS Super Cup then there would’ve been legal questions to answer, and I don’t blame you for wanting to avoid costly litigation over the copyright. And besides, the fans are bound to use shorthand or even a nickname when discussing the tournament. What matters is the substance. But you blew it again.

The MLS is Back Tournament group stage is only three games. I understand you had time limitations, and with that in mind, five of your groups work. But then there’s a group of six. Really Donny? Each team only gets to play half of the other teams. It’s difficult to tell the two best teams if they don’t all get a chance at each other.

Speaking of which, did you think we wouldn’t notice how you rigged this group stage? You can’t announce a random draw and then two hours before say, “Oh, well actually one team has already been selected.” If you’re going to pull a ruse, don’t draw attention to it. Literally every group has a rivalry game in it. You thought we’d be too excited to notice, huh? El Trafico! Hell is Real! But believe me, we saw through it. Though I appreciate that you kept Portland away from Seattle and Vancouver for the full Cascadia Cup. You tried to throw us off your scent, and I appreciate the effort.

Not that I’m complaining about featuring rivalries! My tournament would’ve highlighted them as well. But my idea didn’t promise a random draw. These contentious rivalry games would feel more exciting if they didn’t feel so forced and inauthentic. Personally, I envy the opportunity for the FCC and Columbus team accounts to produce cringe-worthy banter on twitter. It’s part of the fun! But don’t tell me I’m going to get unique and interesting matchups, then fail to deliver. The random draw should not have been limited By conference when you’re in a single, neutral venue. You took a thing that many of us wanted and somehow still ruined it.

I’m sure you must be asking a lot of questions, Donny. Was this letter long-winded? Probably. Am I bitter? Certainly. Was I drunk when I wrote it? Just the first draft. Will my hurt feelings keep me from watching this tournament? Of course not! I’ve been a Cincinnati sports fan my whole life; I’m a glutton for punishment. Just because fans are excited to have soccer back doesn’t absolve you from creating a phony and ridiculous tournament that cannot be taken seriously. On the other hand, good on you for being the first professional sports league in America to return. I’m sure you’ll catch baseball one of these days!