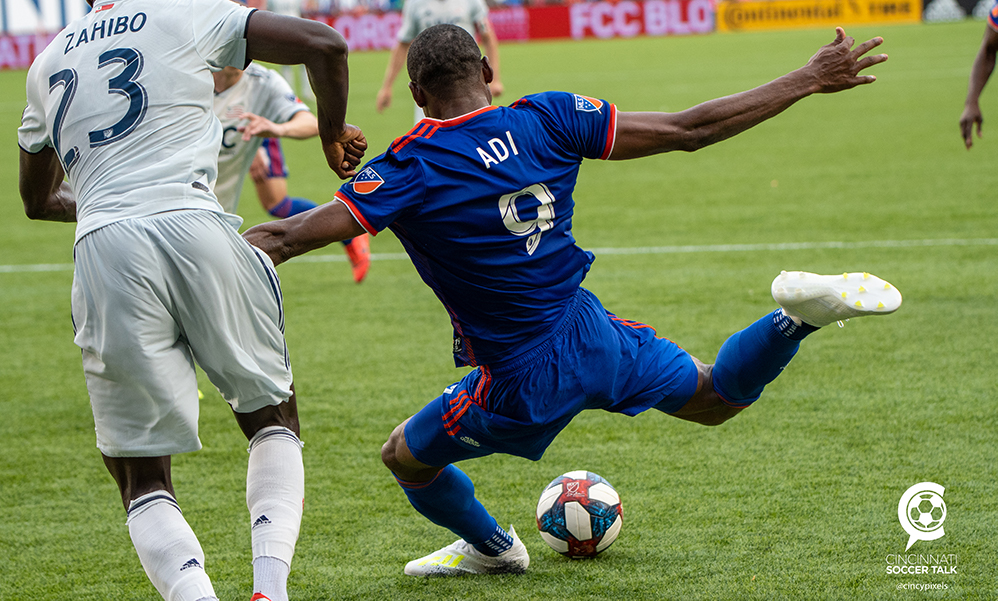 The Orange and Blue exercised their one offseason buyout of their former striker. Adi, now with rival Columbus Crew SC, no longer takes up a designated player spot for the club, and his salary does not count toward its 2020 budget.

Fanendo Adi’s story at FC Cincinnati did not end when the club waived him 10 days ago. The club announced in a Monday press release it has exercised its one offseason buyout of a guaranteed contract on Adi. He will no longer occupy a designated player spot on the club’s roster or count against its 2020 salary budget.

Adi’s guaranteed salary landed just shy of $2 million, but only $575,000 was placed on FCC’s roster budget because of his DP status. This buyout comes a few days after a report by Sam Stejskal of The Athletic said FCC’s rivals, Columbus Crew SC, have claimed the controversial center forward off of waivers.

FCC’s press release confirming its choice to buyout Adi’s contract came within hours of a report by Stejskal and Paul Tenorio revealing the financial details of this development. They revealed the Crew will pay just $205,000 of Adi’s budget charge. The rest of Adi’s guaranteed salary is still FCC’s responsibility, per MLS rules. Hence the buyout.

Columbus’ pickup reunites Adi with his former Portland Timbers coach, Caleb Porter. Adi had the best years of his career under Porter, scoring 54 goals in 126 MLS appearances. Together they won the MLS Cup in 2015, against the Crew.

It appears FCC had made its peace with buying out Adi’s contract if it couldn’t find a team willing to take on his contract. Clearly, no other club in any market was willing to take on the $2 million contract. His value certainly depreciated during his time in the Queen City, scoring only five goals in 25 appearances in all competitions. During his 17 months at FCC he also dealt with a few injuries and was suspended for operating a vehicle while impaired.

With that end goal in mind, waiving Adi to lower the amount of his buyout was the best option left to ownership. While the remaining $1.7 million won’t affect the salary budget, that money still has to be paid. At 29 years old, and a rough couple years, Porter and the Crew believe Adi was still a chance worth taking. Columbus claiming Adi for $205,000 will help relieve its financial loss.

Both FCC and Adi should benefit from his move up Interstate 71. FCC now has more budget flexibility and an open DP spot for future transfers, and Adi has the chance to start over fresh with a coach who still believes him. Perhaps FCC will use the additional budget space to bring in a striker for the future, and Adi will recover his form and get his career back on track. But hopefully not during the Hell is Real Derby.