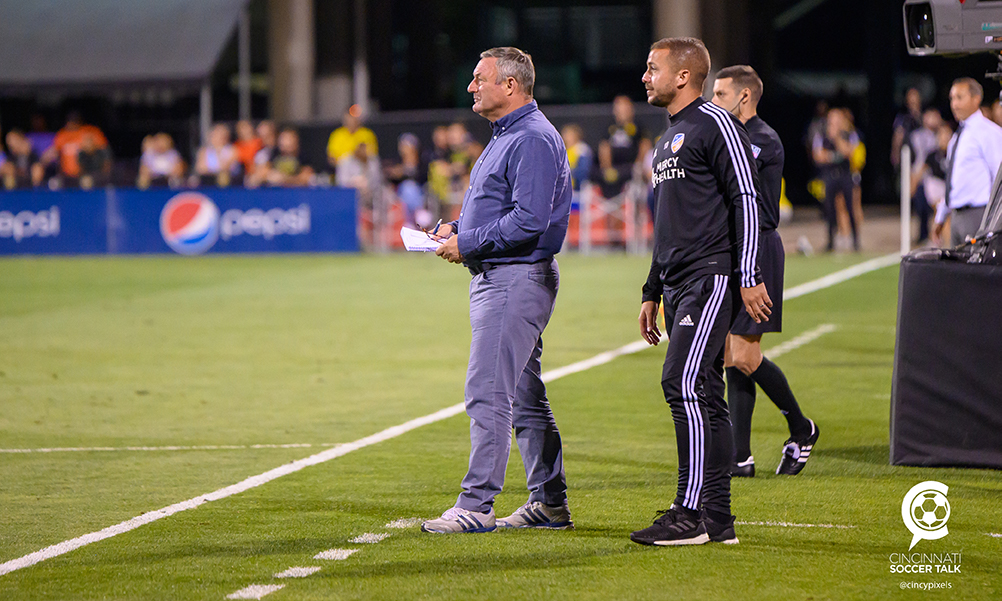 In a conference call with reporters on Thursday, FC Cincinnati coach Ron Jans said his first four days of preseason camp with the club has been “really positive.”

After only four days of preseason training in Tucson, Arizona, Ron Jans wasn’t prepared to discuss individual players, or which ones had stood out so far.

“I have three kids, but if they ask who’s my favorite, I won’t tell,” FC Cincinnati’s coach said during a conference call with reporters on Thursday. “We have seen some good things. But if I name one person, I forget the other 26, so I won’t do that.”

But when the subject of Jimmy McLaughlin was brought up, you could sense Jans’ eyes lighting up, even by phone nearly 2,000 miles away.

McLaughlin, of course, is trying to come back from an ACL tear that prevented him from being a part of FCC’s inaugural MLS season. McLaughlin is back training with the team, but he has been given no assurances beyond an opportunity to earn his way back on to the roster this preseason.

Jans said he talks to McLaughlin every day, and what he has heard and seen from the 26-year-old midfielder has been spot on.

“He chose to go for his chance with FC Cincinnati,” Jans said. “He’s so dedicated. He works so hard. He does everything. I think he can deal with the pressure. He knows, ‘I go for my chance. I don’t have a lot of time. I go for everything and if it doesn’t work, there will come other solutions’. He said, ‘Oh, coach, I have to learn to defend again!’”

There’s quite a bit of learning happening in the desert at the moment, for everyone in the club. With several new faces in the squad and finally ample time for Jans and his technical staff to implement and refine their tactics, the FCC manager said he’s enjoying how things are coming together.

“We’ve had (only) four days, but we are really positive,” Jans said. “The execution could be better, but we’ve seen a lot of good things. We’ve had some problems with the field the first two days and the rain. But we are happy at the moment.”

Jans prefers a structured approach to training. To that end, the players watch a video before each training session showing what they will be focusing on in practice. Then on the pitch, he uses a systematic approach to offense and defense with different combinations of players. At this point in preseason, there is no first team, Jans says. Players are mixed and matched with different position pairings to build familiarity and to see what combinations work best.

“Every day we are training to build up, and the other team is training to defend, in high blocks, and middle blocks, and low blocks,” Jans said. “We are building up with four, with three. We are finding a plan A and a plan B. It’s very good. Because both teams are coached, and we have a plan. It’s not only about the building up, but also about the defense — how to press, when to press.”

It’s also important to build familiarity off the pitch. Jans has added some structure to the players’ free time as well. He appointed captains to make dinner reservations, then kept different position groups together.

The best news coming out of training on Thursday was the overall health of the team. Jans said everyone is a full participant aside from Kekuta Manneh, who is coming off right shoulder surgery in September.

“He is training, but not in the games because when he falls, or gets (hit) shoulder to shoulder, might be a problem,” Jans said. “He’s maybe 60%.”

After taking over as manager in early August and ushering in a strong finish to last season, Jans had been looking forward to the opportunity to have a full preseason camp with his team. For him, it was a painfully long three-plus months.

“The break in America is so long,” he said. “When you cannot do what you like most, you are so eager. It’s so good to be on the field again and coach the team and the individuals. I’m having a great time over here.”