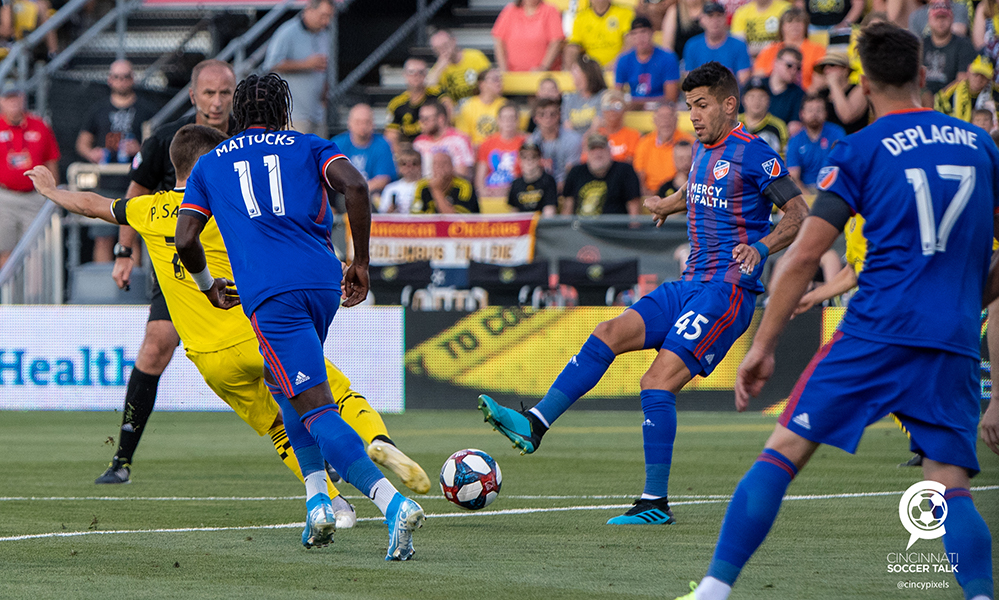 The Hell is Real Derby scene shifts to Nippert Stadium at 6 p.m. Sunday after FC Cincinnati and Columbus Crew SC played to a 2-2 draw two weeks ago in Columbus.

With the playoffs not even in the equation, FC Cincinnati has a chance to claim Ohio for the 2019 season, adding a bright spot to an otherwise tough season. On Sunday night, the nation will get to see Ohio’s two MLS sides battle in the second MLS edition of the Hell is Real derby. In the first matchup, FCC stormed ahead to a stunning 2-0 lead before the Columbus Crew fought back to a draw. This edition, the major x-factor is in the favor of FC Cincinnati, the Nippert Stadium crowd. The weather is expected to be beautiful for the 6 p.m. start, and with that comes a near-capacity crowd for this big matchup.

FC Cincinnati enters this leg of the Hell is Real derby in the basement of MLS. At 5-18-3 and 12th in the East, another victory over the Columbus Crew could be just what new coach Ron Jans and the players need. Even though the statistics don’t look good, the club has played better with the coaching changes. Interim coach Yoann Damet did an admirable job in keeping the morale up during a very tough summer. Since the arrival of Jans, the play of FC Cincinnati has certainly improved, and the trajectory for this club is up.

The additions made by the Orange and Blue during the transfer window have solidified a team that seemed to lack an identity. Andrew Gutman has been a solid piece that has helped with defensive stability. Along with Gutman, the additions of Joseph-Claude Gyau and Derrick Etienne Jr. have been solid for Jans’ system. Both have used their pace to their advantage on the wings, and that could play favorably into the hands of FCC against the Crew. While the match against New York City FC wasn’t pretty on the score sheet, the club had some positives come out of the match to build on for this home matchup against the Crew. Jans has kept his lineup relatively the same throughout his first couple of matches, and that consistency helps from match to match. You can expect to see expanded roles for Gyau and Etienne Jr. as the season moves on.

In the first matchup, FCC went on the attack right from the first whistle. Its pace of play took the Crew by surprise, and the club capitialized, scoring twice. However, the team was unable to keep that intensity up for the entirety of the 90 minutes. The advantage in this match will be the Nippert faithful. With a near-capacity crowd expected, the fans could be crucial in helping the Orange and Blue keep the intensity for the entire match.

This season, the Columbus Crew have provided their assistance in helping the state of Ohio have a dismal summer of soccer. As it stands, the Crew sit nine points ahead of FCC with two more games played than the Orange and Blue. With a win, both clubs have a chance to put a dent in the hopes of catching each other. A victory from FCC will put it within six points with two games in hand.

Coming into this match, in terms of goals, something major has to give. Per the stats, FC Cincinnati has conceded a goal in 11 straight home matches, which is tied for the Columbus Crew for the longest active streak in the league. That, coupled with the fact the Crew have been shut out seven times already this season on the road, is just three matches shy of their own record. Both clubs average a goal a match, but FC concedes 0.8 goals (2.3 / 1.5) more than the Crew.

Pedro Santos leads the crew with nine goals on the season and scored an absolutely beautiful goal in the last match. Coach Caleb Porter rotated some players for their midweek match, a 1-0 loss to NYCFC on the road. Porter and his club are obviously focused on snagging a big three points from their bitter rival on the road. Columbus is only seven points out of a playoff spot, so these three points are crucial for them. The Crew are winless in their last four matches, so if they have any hopes of competing for a playoff spot and not a spot in the basement of the league, it starts with a full three points in a hostile environment.

In the two matches under Jans, the Orange and Blue have failed to get a win, but a result over their in-state rival would be huge moving forward for the rest of the season and building into the 2020 season. The same applies to the Crew. As it stands, the Crew need a win to even the overall series, and a result could help propel the Crew for the rest of the season. As always, stay tuned to Cincinnati Soccer Talk for all things Hell is Real leading up to and after the big derby match on Sunday.