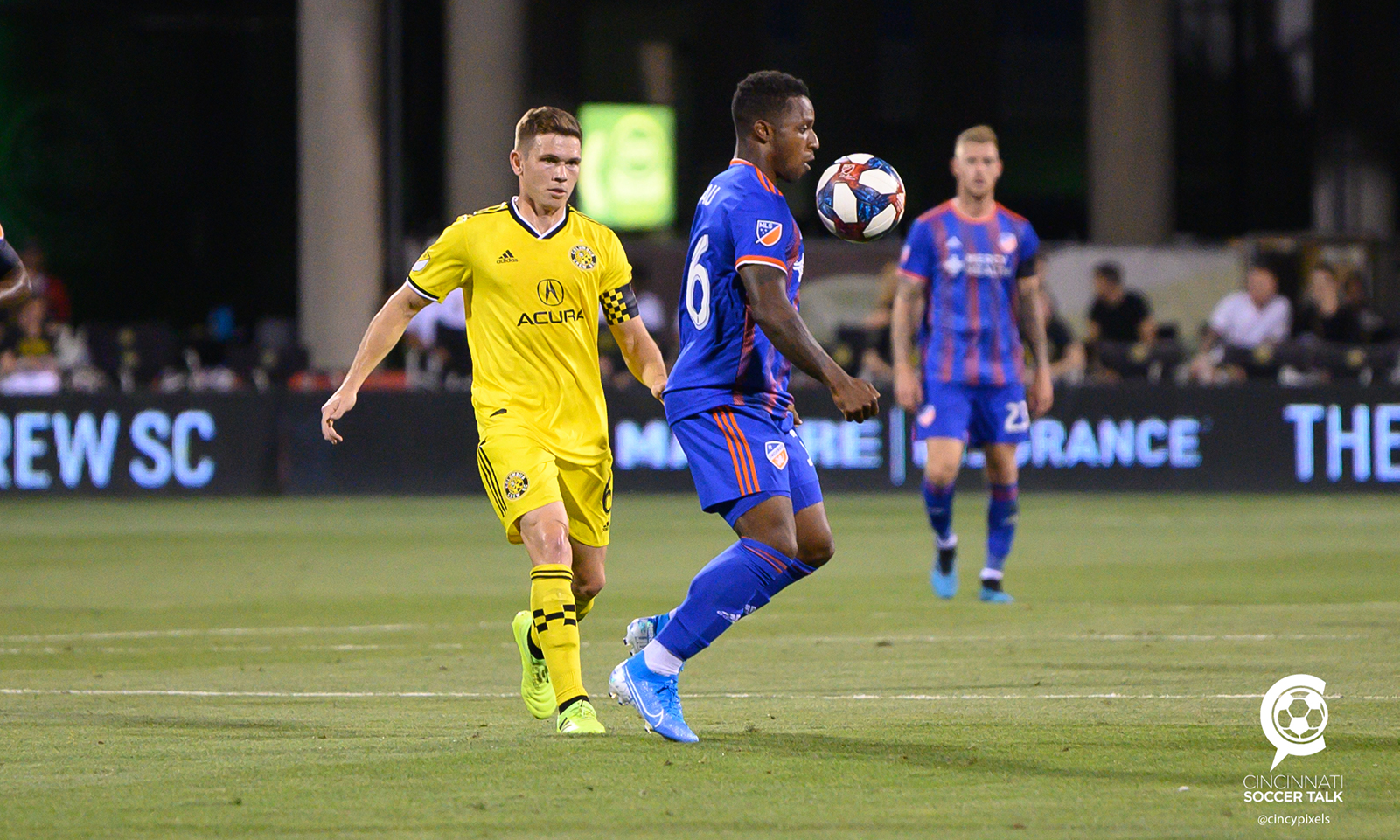 Once under the tutelage of then-Borussia Dortmund manager Jurgen Klopp, Joseph-Claude Gyau’s path after a knee injury has landed him at FC Cincinnati.

This story might sound familiar to American soccer fans: A young winger plies his trade with Bundesliga side Borussia Dortmund while aiming to stake his claim to a spot on the U.S. men’s national team roster. He’s the next big thing.

Only this story isn’t about Christian Pulisic. It’s about Joseph-Claude Gyau. It’s a tale of courage, perseverance, and one where a happy ending could be to the benefit of FC Cincinnati.

In 2014, Gyau had everything on the table. He had earned the trust of then-Dortmund manager Jurgen Klopp at a time when Pulisic was still in the club’s academy and far from becoming a household name in America.

No, it was Gyau who was the rising star. He was the one standing before the “Yellow Wall” in one of world football’s most formidable atmospheres at Signal Iduna Park. He was the one coveted by USMNT manager Jurgen Klinsmann.

A fairy tale was being written. Then in an instant, everything changed.

On Oct. 10, 2014, in the 22nd minute of USMNT’s friendly against Ecuador, Gyau was subbed off with a knee injury, the seriousness of which evolved over the ensuing weeks. It initially was thought to be a sprain. A rehab process that was measured in weeks soon became months. Ultimately, it cost Gyau nearly two full seasons.

“It was rough, just seeing everything come together and having the injury happen so abruptly,” Gyau said. “You are either going to hang up your boots, or you’re going to keep going and see where it’s going to take me. I took option two.”

Gyau’s father Philip, a former USMNT forward, and mother Amina, provided support and inspiration. Pulisic’s father Mark, who Gyau would see regularly in the gym, was a source of motivation during his rehab.

When Gyau was finally fit, reality hit hard. His spot in Dortmund’s first team was gone. After a stint with Dortmund II, he decided to sign with Sonnenhof Großaspach in the third division of German football. He made 50 appearances, producing six goals and five assists. As difficult as it was to essentially start over, Gyau knew it was the right decision for him.

“I had to make that step to get some more games under my belt,” he said. “It was a leap of faith, but I wanted to do it for myself to play and get my feet back in the water.”

Gyau, who turns 27 in September, believes he’s better off for the experience. He came back stronger, more resilient.

“I learned a lot about myself,” he says. “A lot of characteristics come out when your back is against the wall. I learned how to be more of a professional. Taking care of my body, things that I didn’t pay as much attention to before the injury. It definitely opened my eyes to a different side of the game.”

After making 20 appearances and scoring two goals for German side MSV Duisburg, it was time for Gyau to come home. He returned to the USMNT in June. On Aug. 8, he signed with FCC, a club that didn’t exist when Gyau began his German career in 2011.

“I went over to Germany at 17 years old,” Gyau said. “I thought it was the right time to come back. Cincinnati was already in the fold before the national team called. Speaking with (USMNT) coach Gregg (Berhalter), it made more sense for me to get back here where they could monitor me on a weekly basis.”

One of the positive aspects of missing two seasons on the pitch, if there are any, is the fact that Gyau has two fewer years of wear and tear on his body. He’s a young 26. The experience he gained in Germany and the knowledge garnered from Klopp still is a part of his overall game and approach to training.

“To play in his type of system, you have to have a certain type of fitness,” Gyau said of the current Liverpool manager. “Win the ball (back) right after you turn it over. Speed of play. Just being around great players at such a young age. You pick up things quicker.”

Gyau speaks with Pulisic often. While he was out with the injury, Pulisic became a star. He made his Premier League debut at Chelsea this past week. But Gyau doesn’t harbor any bitterness or regret. Far from it.

“We exchange words quite a bit,” Gyau said. “I tell him, ‘Go ahead and do your thing in the Premier League. It’s a great opportunity. Go ahead and attack that.’”

Now Gyau is ready to attack MLS. He made his FCC debut in the 63rd minute of Saturday’s 2-2 draw at Columbus. It could take some time for him to achieve match fitness, but the quality Gyau brings could have him pushing for a spot in the starting XI soon.

“We feel his ability and pace are a good fit for our style of play,” said FCC general manager Gerard Nijkamp after Gyau’s signing. “He will provide another attacking option on our roster.”

Gyau, a Tampa, Florida, native, is happy to be back in the United States. He has a few friends and a cousin who lives in Cincinnati. They have filled him in on the atmosphere at Nippert Stadium, which he’ll get to experience first-hand Saturday vs. New York City FC.

“Everybody says they get goosebumps,” Gyau said. “They say, ‘It’s a crazy atmosphere. Wait until you see the stadium!’ Dortmund’s hard to beat, but I have high expectations (for Saturday). There’s a huge upside here. Being able to be a part of it is very exciting.”