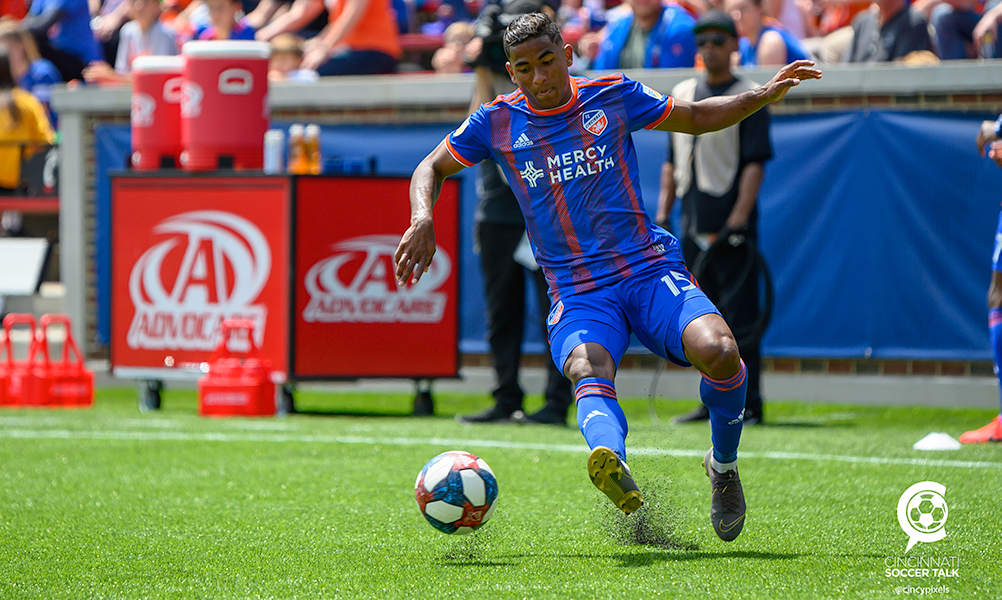 Here are our player ratings for FC Cincinnati’s 2-1 result at the Chicago Fire on Saturday.

FC Cincinnati picked up its fifth win of the season and second in a row with a 2-1 result at the Chicago Fire on Saturday. Allan Cruz put the away side up in the with a first-minute goal. The Fire were awarded penalty kicks in the first half, but Nicolas Gaitan was only able to convert a chance in the 45th minute after he tapped in a rebound after Spencer Richey blocked the initial shot. Fanendo Adi picked up the game-winner and his first goal of the season in the 83rd minute to clinch three points for Cincinnati. Be sure to check out this week’s match report for more details of the match.

Spencer Richey’s performance should land him a spot on the MLS Best XI for the week after limiting the Fire to one goal. The keeper was under pressure all night but was able to come up with six saves (ties career high) including the initial stop of Gaitan’s PK.

Deplagne did a little bit of everything for Cincinnati on Saturday night. He was solid once again at left back and was able to get forward at times. His biggest contributions were a couple of late clearances when CJ Sapong got behind the two center backs. There weren’t a ton of stats that stuck out, but he quietly keeps putting in quality appearances for the Orange & Blue.

Conceded a PK in the 25th minute after a foul on CJ Sapong. Outside of that play, he did well with seven headed clearances, but those types of fouls can be costly. He was a little too careless with his body positioning and has to know better when you are on the border of the box.

After starting at right back last week, Hoyte was thrown back into the heart of the defense. Up against the fast and strong CJ Sapong, Hoyte struggled at times with that speed. Sapong was able to get behind Hoyte several times, and Chicago has to be disappointed with how many chances they failed to convert.

The match was a mixed bag for Powell. He was average on the defensive side of the ball but there are still a lot of glaring issues that give cause for concern. The right-back showed signs of promise as he tried to use his pace a couple of times to start a break but Powell is still missing that final quality to truly create an opportunity. His 36.4% passing was unacceptable. Most of his passes tried to skip the midfield and ended up more often than not creating a turnover that put the club on the back foot.

He had the early cross into the box to set up the Cruz goal and was positionally aware to continue his run off the Richey long ball. His cross of the ball in a challenging position confused the Fire backline. Unlike last week where he had 61 passes completed, this match Bertone wasn’t involved much, completing 19 of 24. This was due to his positioning as he was placed higher this week compared to the deeper CM role that Stanko occupied. The Fire also wanted to hold possession, and right now FC Cincinnati doesn’t have the ability to hold the ball against teams who prefer to play that style.

Caleb Stanko was another player who had a quiet night. He did a nice job trying to clog up the midfield, and Chicago had to resort to playing wide through the wings. The Fire’s 31 crosses were able to be contained by Stanko, Hoyte, and Waston. While I prefer Bertone as my first choice CDM who can spray the ball around, Stanko was able to contribute by completing 27 of his 31 attempts.

Cruz opened up the account for FC Cincinnati in the first minute. After Bertone’s cross deflected off a Fire defender, the Costa Rican took a deft touch to put the ball into the back of the net. He nearly picked up a second a couple of minutes after play resumed following the weather break. He chipped Kenneth Kromholm, but Francisco Calvo made a great play to take the ball off the line. While I wouldn’t want to continue to deputize Cruz in the attacking midfield role for a long part of the season, he performed well in the absence of Frankie Amaya.

Like Bertone, Manneh wasn’t as involved in the match with limited possession, but he made his opportunity count with an assist to Adi. Cruz won the ball initially in midfield and was able to get it to Manneh. The winger then hit a perfectly weighted pass to Adi, who took the shot off the bounce. While he didn’t get forward as much, I do have to point out that he did a nice job of checking back defensively. He really made it difficult for Chicago, and you have to appreciate his effort on as side of the ball he isn’t known for.

Manu, what were you thinking? The handball in the box before the half was a gut punch to Cincinnati. Ledesma has been a professional long enough that he knows he can’t go flying in the box recklessly with his hands extended. Offensively he was a non-factor. He touched the ball four times in the attacking third, completing just two passes. FC Cincinnati didn’t have much of the ball, but Ledesma has the quality to create chances out of nothing, and he needs to assert himself more in the match.

With little possession, FC Cincinnati had issues getting the ball up top to Dally. The rookie striker failed to get a shot off, but he did create one chance on goal with a perfect pass to set up Cruz’s chip. He still fails to get balls that you’d expect a more experienced striker to get his foot on. While the first-minute goal worked out well for FC Cincinnati, Dally really should have picked up the initial cross, but the away side caught a break.

The striker finally picked up his first MLS goal of the season with a beautiful strike just inside the right post in the 83rd minute. For a striker seemingly lacking in confidence, the way he took the shot off the bounce was perfect and hopefully it will lead to more goals this summer.

Victor Ulloa appeared as an 84th-minute sub for Kekuta Manneh.