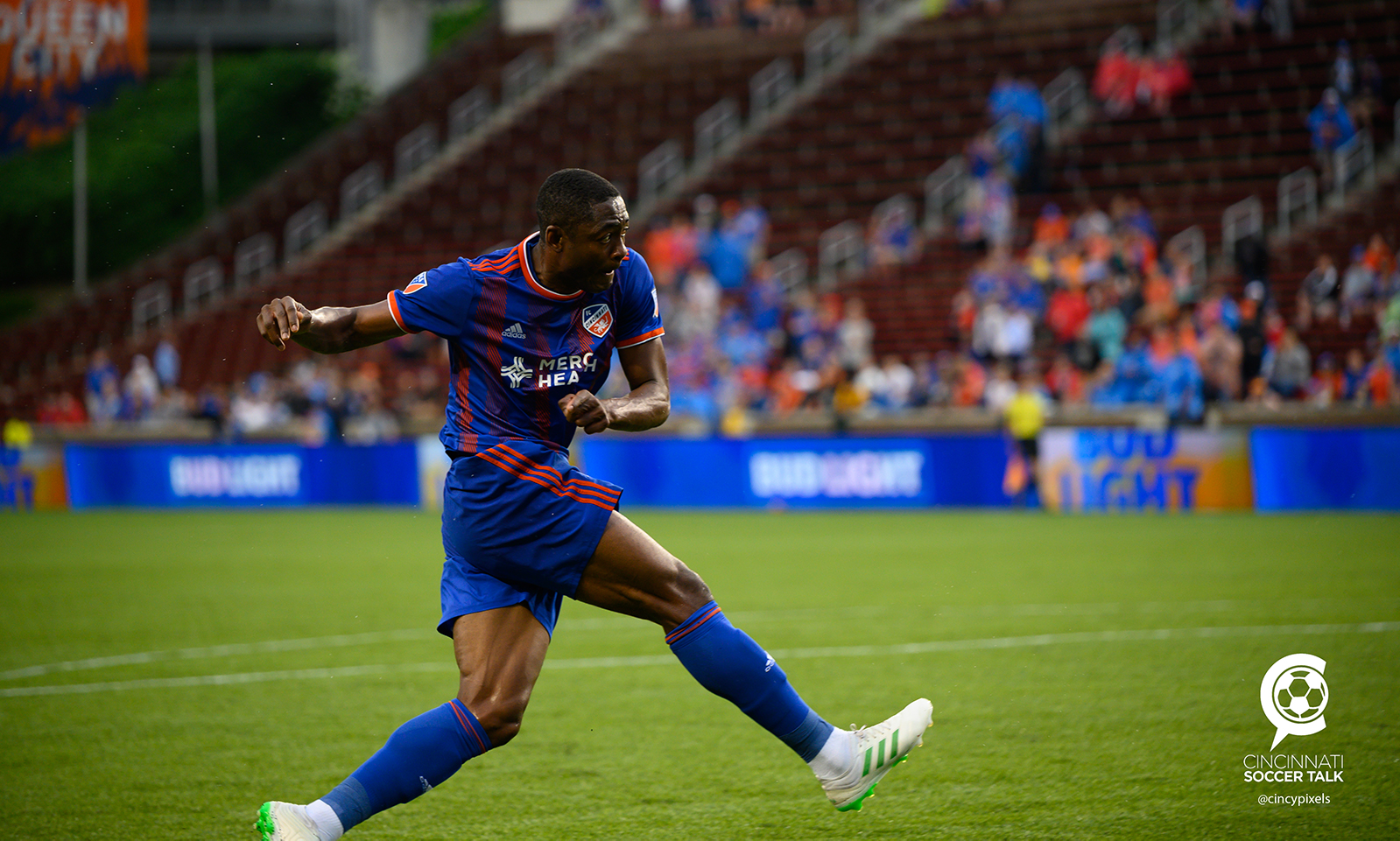 On an 83rd minute goal from Fanendo Adi, FC Cincinnati beat the Chicago Fire 2-1 on Saturday for its second straight win.

FC Cincinnati has picked up three points in back-to-back matches as it defeated the Chicago Fire 2-1 Saturday night at SeatGeek Stadium. Fanendo Adi’s first goal of the 2019 MLS Season in the 83rd minute gave FC Cincinnati its second road victory of the season.

Allan Cruz got hot during the Gold Cup and has continued his strong play since rejoining FC Cincinnati. Cruz scored his third goal of the season in the first minute of the match, tying Kekuta Manneh for the most goals on the team in MLS play. The strike by Cruz was also the quickest goal in MLS history for FC Cincinnati. Only the goal scored by Danish striker Danni Konig 28 seconds into the match against Nashville SC in the 2018 USL campaign was earlier.

Throughout the next 20 minutes, each side had a couple of corner kicks and shots but couldn’t generate any significant offensive play.

That all changed in the 22nd minute after captain Kendall Waston committed a foul. While the foul appeared to have occurred just outside of the box, video assistant referee review ruled a Chicago penalty kick because it was deemed that the foul by Waston was committed inside the penalty area. FC Cincinnati caught a major break as the penalty kick taken by Nicolas Gaitan in the 25th minute had Spencer Richey diving the wrong way, but the shot ringed off the left post.

The match was then delayed in the 26th minute due to lightning in the area. Going into the locker room, FC Cincinnati had all the momentum on its side and gave both sides plenty of time to think about what had occurred up to that point.

After a 58-minute delay, the match resumed with both sides having a few quality chances to put the ball in the back of the net. Fire forward C.J. Sapong put attempted a few headers, with one going over the frame of the net and the other being saved by Richey. In the 38th minute, Cruz had an opportunity to score his second goal of the half, attempting to chip the ball into the net, but the shot was cleared away by Francisco Calvo.

Chicago got the last laugh of the first half, however, as Emmanuel Ledesma committed a handball within the penalty box in the third minute of stoppage time. While the initial penalty kick by Gaitan was saved, Richey couldn’t hold on to the ball, allowing Gaitan to easily chip the ball into the net, making the match tied 1-1.

The pace of the second half was significantly slower. This change in pace was primarly a result of more fouls being called, including three yellow cards on FC Cincinnati within the first 15 minutes of the second half. Both sides made substitutions after the 60th minute in an attempt to create more scoring opportunities. Djordje Mihailovic was brought in the 64th minute and Fanendo Adi was brought in for Rashawn Dally in the 67th minute.

Pace continued to be slow, this time with the Chicago Fire picking up two yellow cards within seven minutes. Both sides had possession in the final third but were unable to do anything with it. That all changed in the 83rd minute when designated player Adi scored his first MLS goal of the season with a beautiful strike with his left foot, sending the ball into the bottom right corner of the net.

FC Cincinnati closed out the remainder of the match, giving the Orange and Blue back-to-back wins for the first time since March. FC Cincinnati equals the Columbus Crew on points with 17 but remains in 12th place on goal differential.