In a new version of Talking Tactics, our Brad Gough breaks down the goals scored in FC Cincinnati’s 2-1 victory over the Chicago Fire on Saturday. Here’s how they happened.

As an experiment, I thought I’d try to give you, my loyal readers and budding tacticians, a break from the all-in-one tactical pieces that I’ve been writing in favor of a two part series: 1) a tactical breakdown of all of the goals scored during the match — think a highlight reel for tactical nerds; and 2) a second piece to be released Monday with bigger tactical thoughts on the match — think formations, personnel, and ideas. Here’s the goal breakdown for Saturday’s 2-1 victory at the Chicago Fire.

As always, let us know your thoughts at feedback@cincinnatisoccertalk.com.

Things started for the Orange and Blue with a simple free kick from Spencer Richey. They lined up with a winger and midfielder on each side, allowing Richey the option of playing the ball down the left or right. 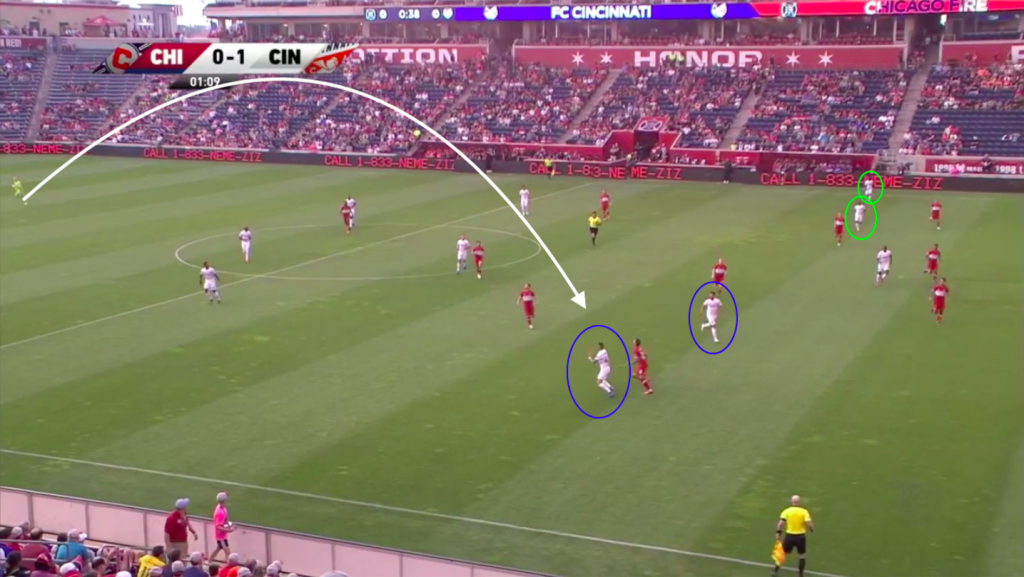 Emmanuel Ledesma positioned himself well to shield the defender and win the first ball. Leonardo Bertone was able to run in behind as it bounced through and collect the ball.

Ledesma’s continued run behind the defense provided a moment of confusion for the Fire defenders. The trailing defender should have immediately closed down the ball (red dashed line below) allowing the covering defender to sag back and pick up Ledesma’s run. However, both defenders momentarily tracked toward Ledesma, providing Bertone space to pick out his cross. 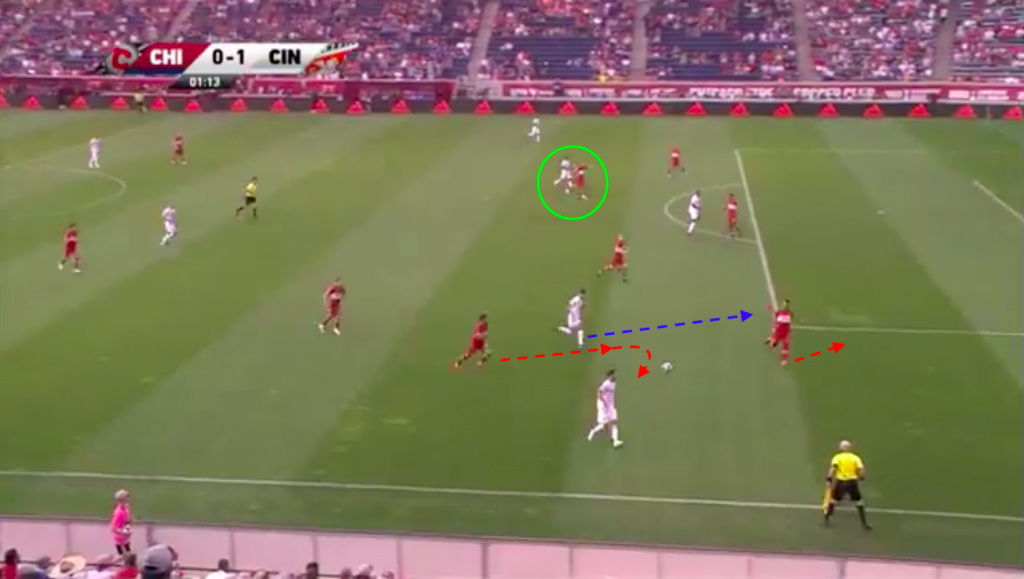 As Bertone swung his cross in, Rashawn Dally attacked the flight of the ball toward the near post, forcing the Fire defenders to account for him. He didn’t make contact with the ball but allowed Allan Cruz to ghost in behind the defense. 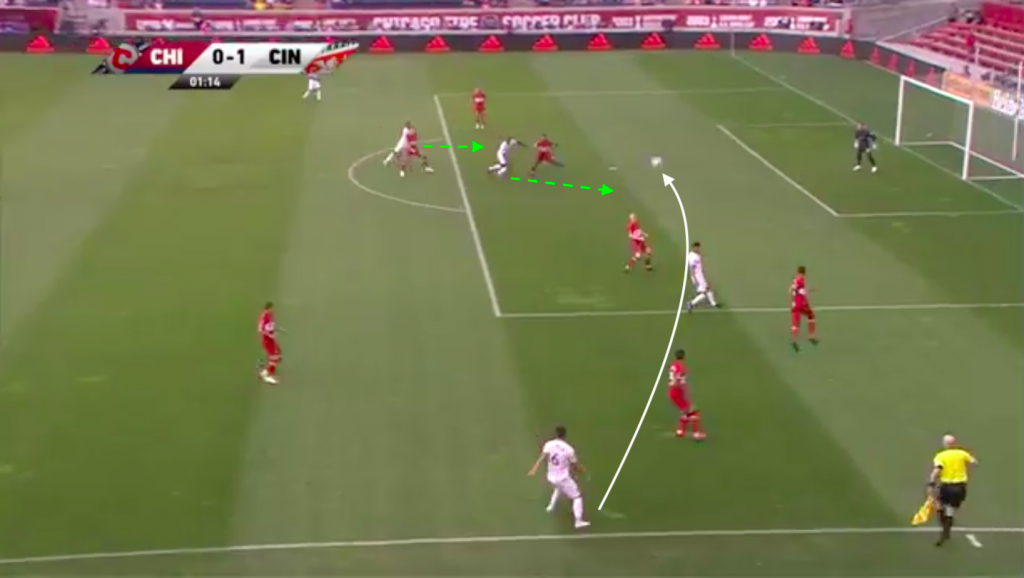 FCC ended up with a bit of luck of its own making as Cruz stayed with his run and kept his eye on the ball instead of letting Dally’s whiff put him off. As the ball bounced off a Fire defender into his path, Cruz was able to get his shot off before the Fire defenders knew what was happening. 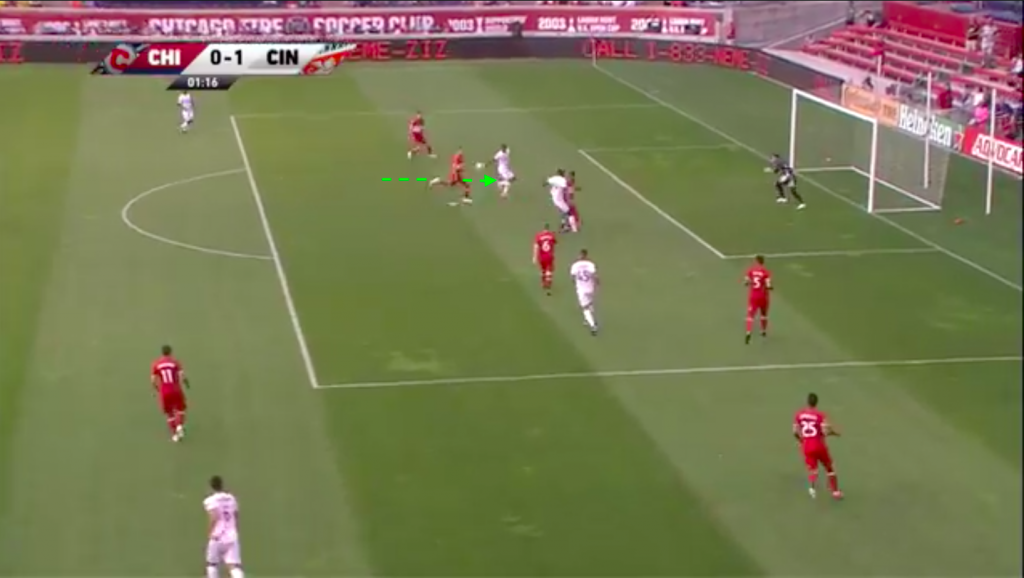 The run-up to the penalty that led to Chicago’s only goal started with the FCC midfielders getting pulled out of position (yellow) as the Fire possessed out of the back. 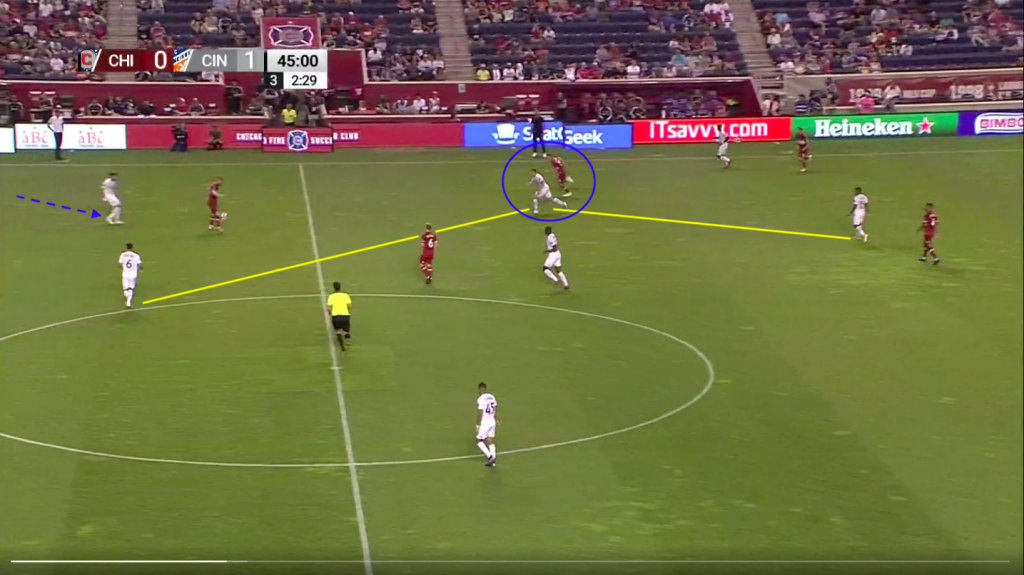 Pressing only works if you press as a unit. Cruz and Caleb Stanko (blue circle) both pressed, but Bertone left a gap between himself and his midfield unit. As the ball was played into that gap, Mathieu Deplagne correctly stepped into the midfield. Stanko turned to follow the ball but was outrun by the Fire player down the wing, allowing an easy wall pass to beat both Stanko and Deplagne. 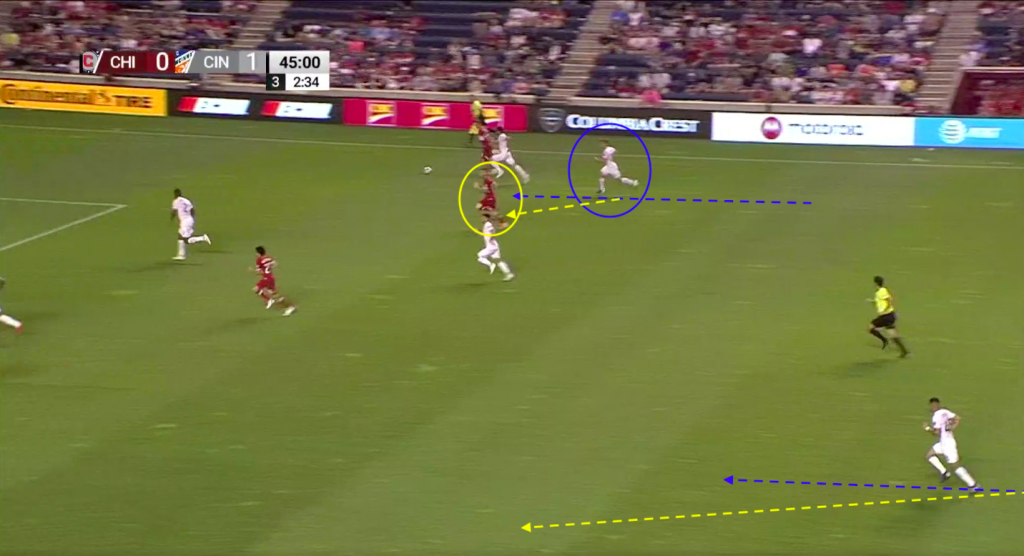 Deplagne chased as the Fire winger carried the ball toward the corner. At this point Stanko should have made a recovery run toward the center picking up the free player that Deplagne had released (yellow circle) to chase the ball. Similarly, Ledesma tracked straight back toward goal instead of recovering to the far post to help the full back on his side. 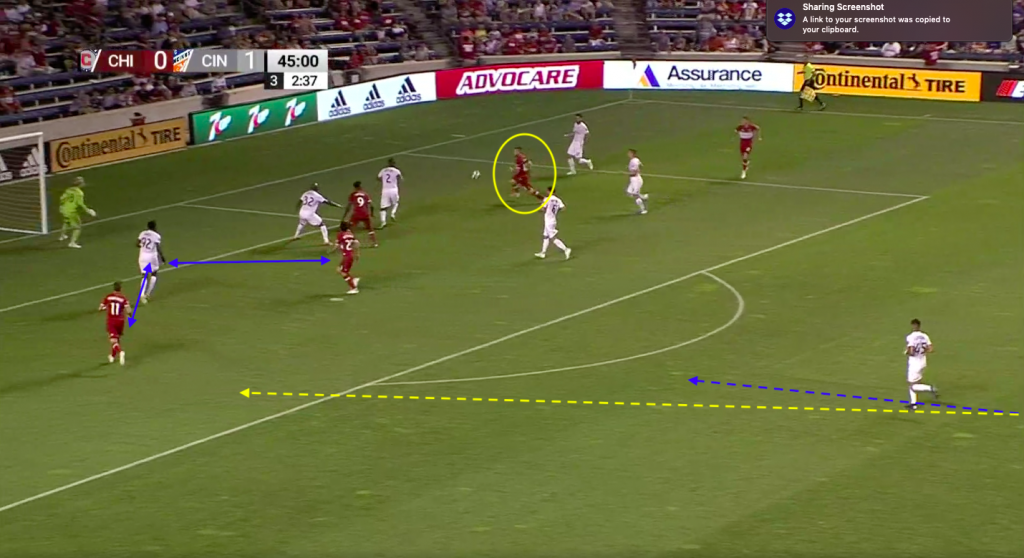 Deplagne was able to block the initial cross, but the ball deflected kindly to the free Fire midfielder. The FCC back line shifted, leaving Alvas Powell with two Fire players to mark and Ledesma too far out of position to intercede.

Finally, the magnified image below shows the moment that created the penalty. Attempting to recover, Ledesma came flying in to block the cross. Powell showed his defensive experience tucking his arms behind his back as he approached the ball. Ledesma, on the other hand, was not as careful as he stretched to prevent the cross. 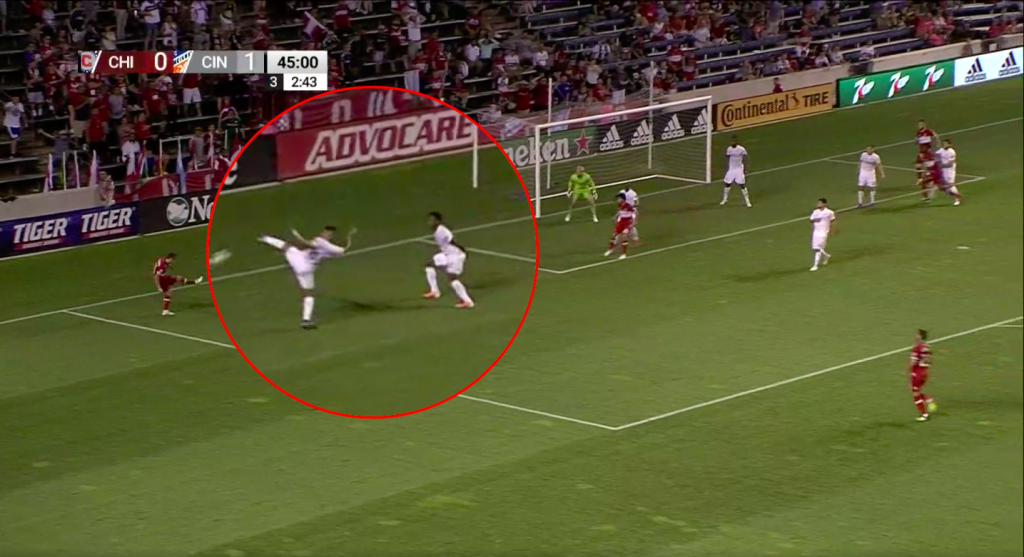 The FCC game-winner started with the midfield again pulled out of position. However, Deplagne recognized this and tucked centrally to pressure the Fire midfielder. 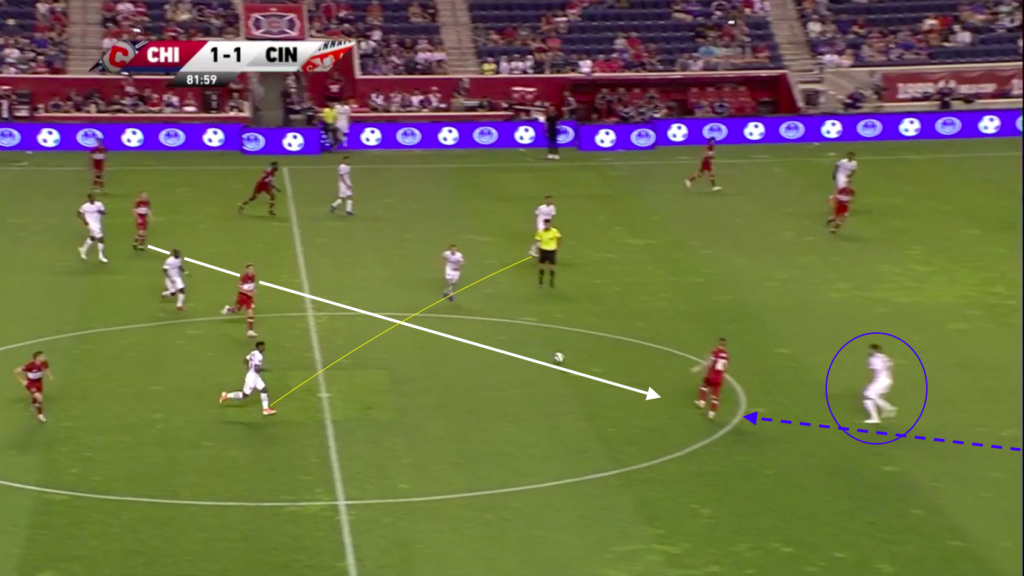 Luckily, Cruz recovered quickly. As the Fire looked to counter, Cruz had to make the tackle because with Deplagne pulled into the center the Cincinnati right flank was completely exposed (red circle). 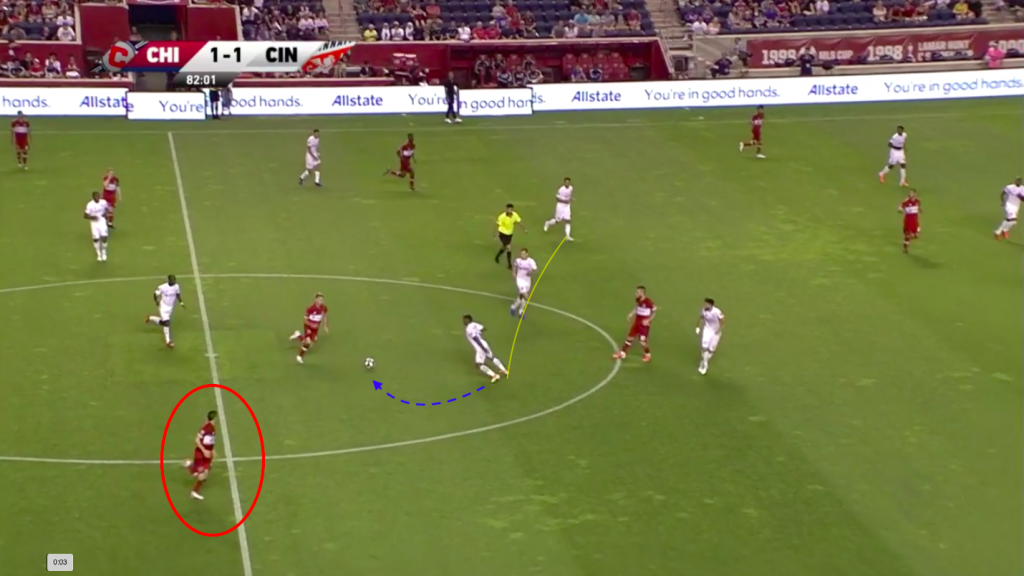 Cruz poked the ball forward to Kekuta Manneh, who won a tackle with a charging Chicago defender. Fanendo Adi made a decisive diagonal run to open up space, and Manneh slipped a perfectly weighted pass in front of the big Nigerian. 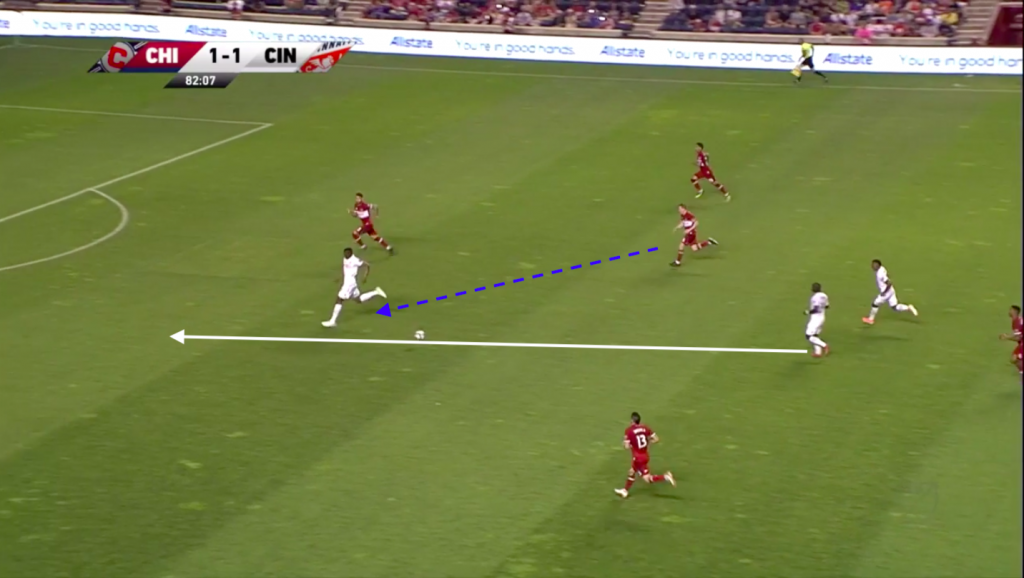 Finally, Adi intelligently struck the ball with his first touch. It was cool and calm, as if the forward had been scoring goals all season. Had he taken a touch to set himself, his angle would have narrowed significantly due to the closing Chicago defender. His first-time finish was excellent, and a much-needed game-winner for both the team and the player. 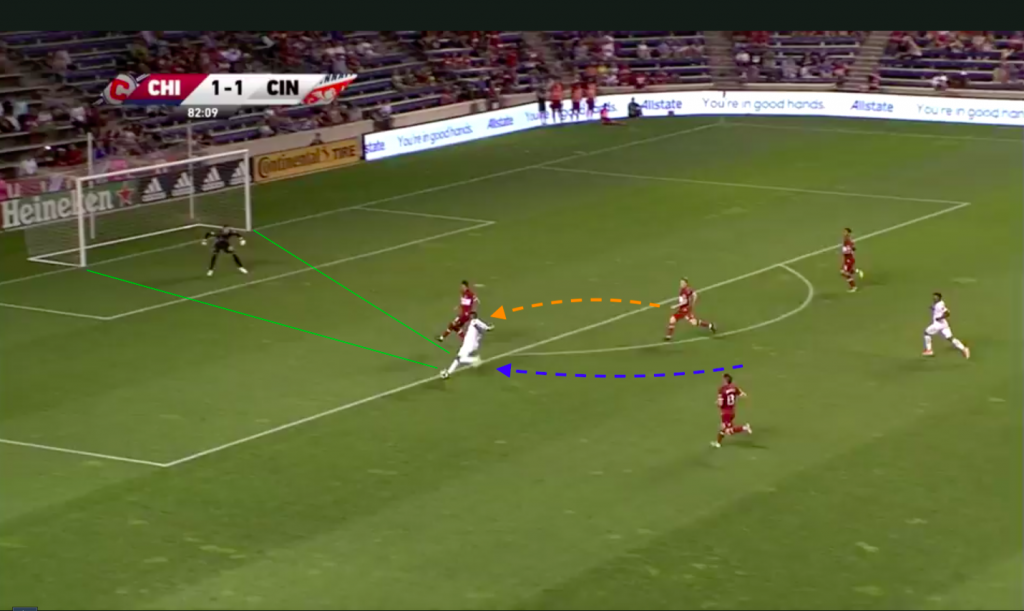 Look for my regular edition of Talking Tactics to come soon, where I’ll break down what happened that allowed these goals to be created and give FC Cincinnati their second win on the bounce.