Coach Gough stops by again to break down some more FC Cincinnati game film after their surprising win over the Chicago Fire.

Winning two games “on the bounce” as they say in the soccer world, hasn’t been an experience that the FC Cincinnati faithful have been used to, and how they’ve done it leaves some room for optimism.

In the home win vs. the Houston Dynamo, Yoann Damet elected to employ a 4-3-3 system of play. 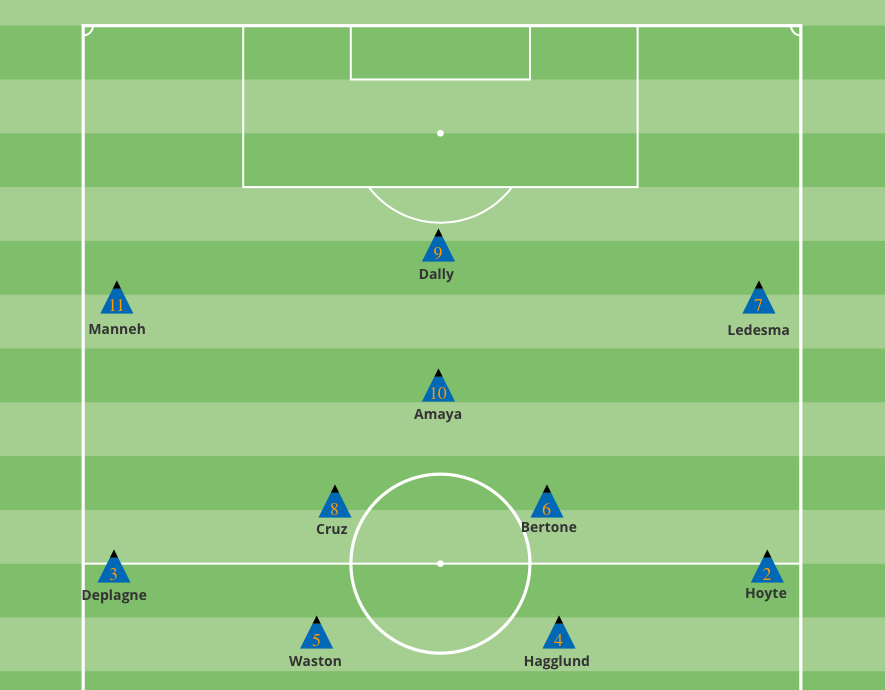 In this system, Allan Cruz functioned as the “#8,” getting forward into the attack, dropping back defensively, and pressing the Dynamo backline (I wrote extensively about that HERE).

Perhaps due to Amaya’s injury, or maybe due to this match being on the road, against the Chicago Fire Damet lined the team up in a more defensive formation. When the Fire had possession of the ball, FCC dropped into the low block (that is, defending in their own half) 4-4-2 seen below. 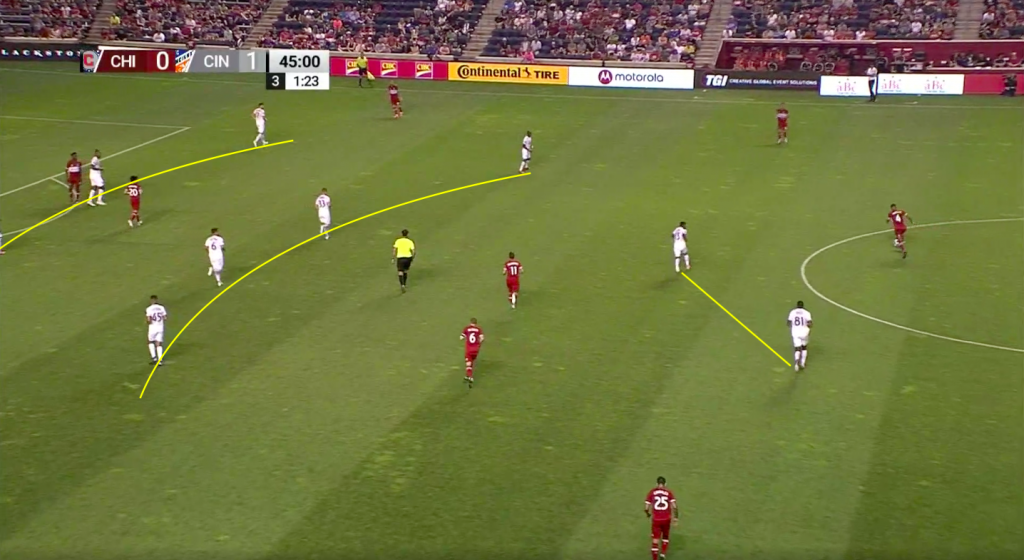 FCC defended as two solid lines of four players, with Cruz and Rashawn Dally functioning as a two-man press up top. The outside midfielders, Emmanuel Ledesma and Kekuta Manneh, had much more defensive responsibility than as wingers in a 4-3-3 They dropped deep allowing the strong-side outside back to remain free instead of marking the opposition winger (yellow lines below) and the weak side outside back to pinch centrally with the rest of the backline. 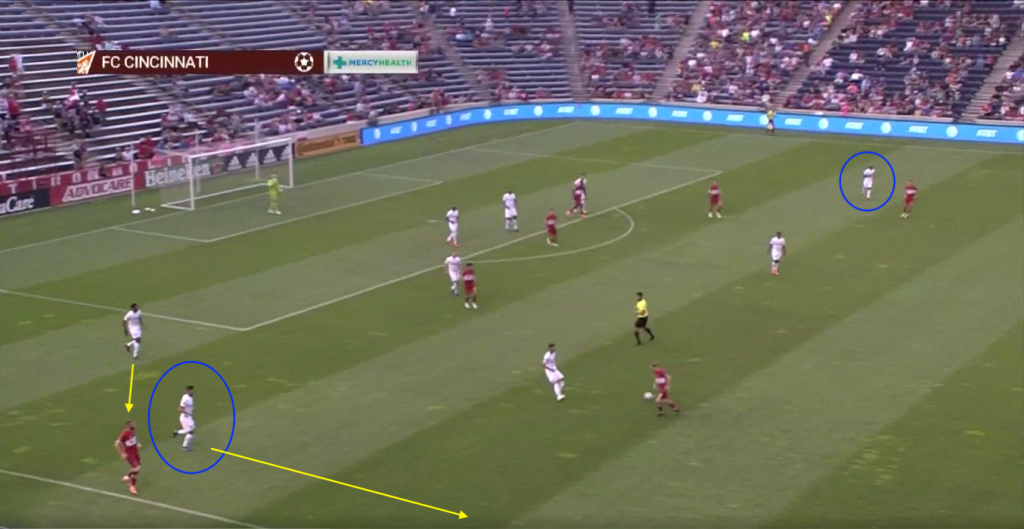 In possession against the Dynamo, Cruz moved forward leaving Leonardo Bertone as the true #6 (holding midfielder). Against the Fire FCC appeared to attack in more of a 4-2-3-1. The big difference here being that, in a 4-2-3-1, the team functions with a true defensive-minded double pivot (the “2”). As one midfielder moves forward to support the play (Caleb Stanko below), the other midfielder drops back to maintain the 2 player base of the midfield triangle. Thus, the 4-2-3-1 doesn’t have a true #6 or #8, as either defensive midfielder can step forward or back into either role. This limits dynamism and movement going forward but provides the midfield with a solid block from which to stifle any counters. 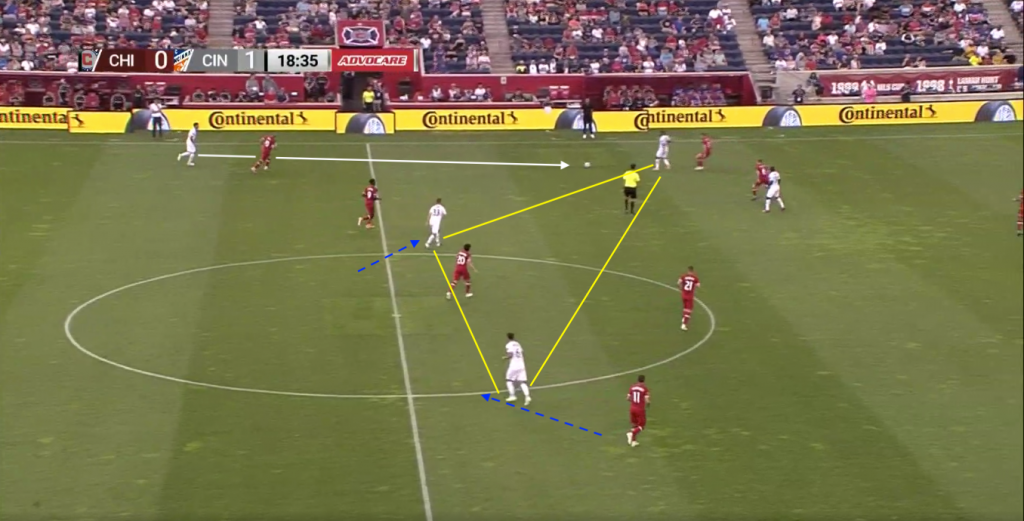 Though the formation and approach were different, FCC’s insistence upon building out of the back remained, and the team continued to struggle in that regard. Neither Justin Hoyte nor Kendall Waston have been excellent as ball-playing center backs, and both turned the ball over frequently. However, the biggest thing hampering this team from possessing the ball through the thirds of the field is movement to create space from players off the ball. 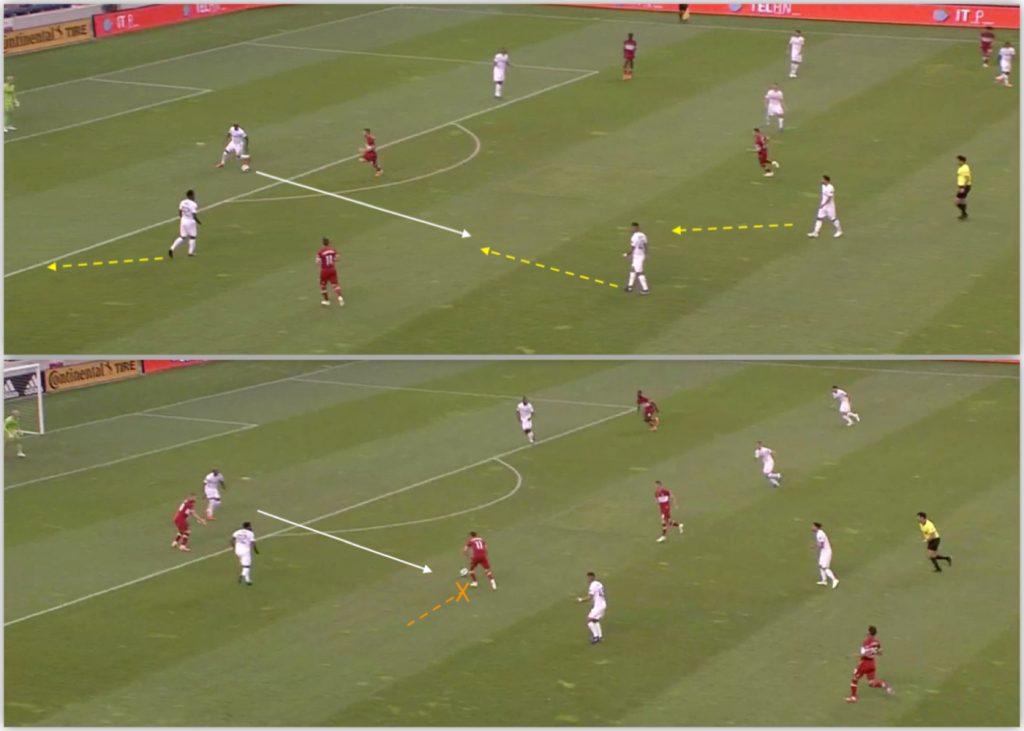 The image above is a good example of this. As Hoyte looks to play forward, Alvas Powell should be stretching the field wide to provide a passing option while Ledesma needs to check into the gap between the pressing Fire players. Neither happened, and Hoyte turned the ball over in a critical area.

Even when the team strung passes together along the back, the movement was not sufficient enough to open up space. 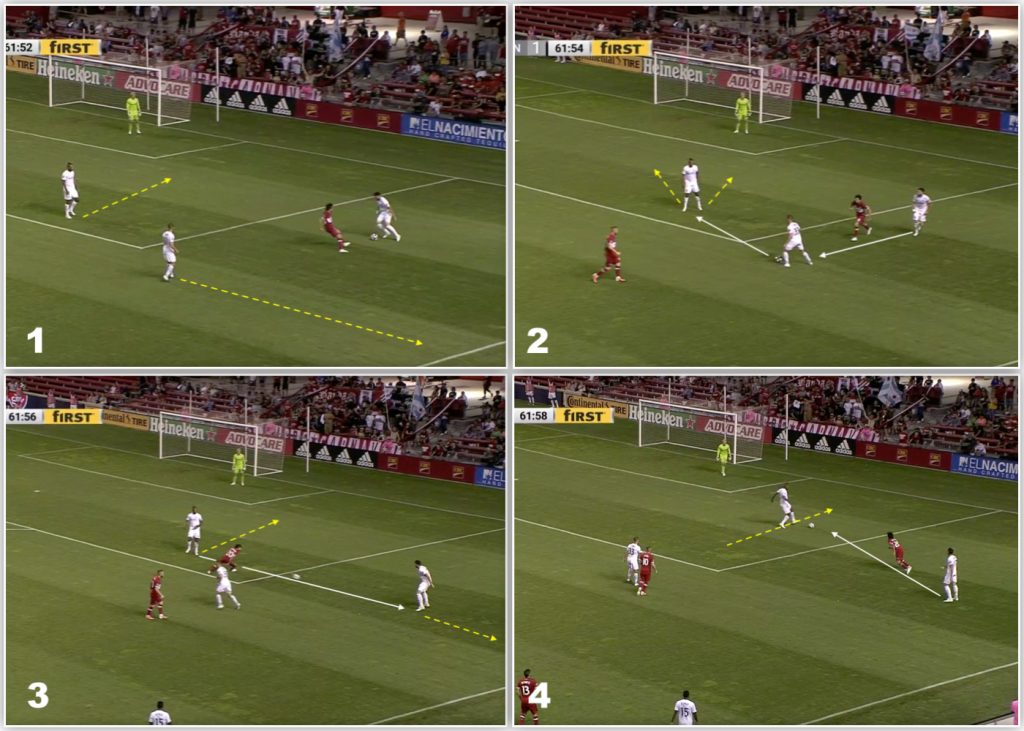 In the series above, Mathieu Deplagne looked to possess out of the back. Waston and Stanko should have looked to stretch the space as big as possible by working back and wide respectively (1). Deplagne was able to work the ball to Stanko, who then played the ball to Waston. These two passes were immediately pressed by a Fire player as the space remained tight (2). Waston played the ball back to Deplagne, and three passes later no progress had been made and no space had been created (3). Finally, Deplagne misplayed a pass behind Waston, who sprayed a wild clearance that was easily won by the Fire midfield (4).

The main idea in building out of the back is for all players on the field to make the playing area as big as possible by moving to open up space in the hopes of finding a midfielder “between the lines” that can move the ball forward. 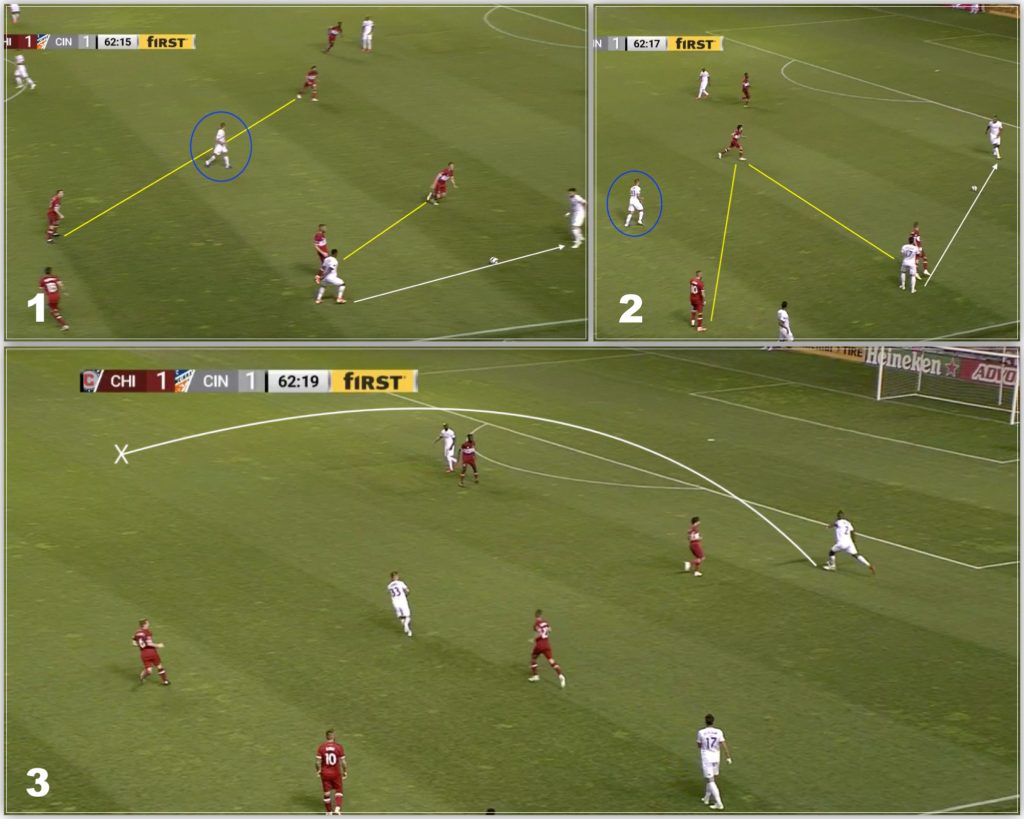 In the series above Caleb Stanko (blue circle) was well positioned, but as the ball moved from Cruz to Deplagne to Waston, none of them were able to find Stanko. In the end, Waston again heaved a long ball that went directly to the opposition.

Building from the back may be something that Damet and company are set on doing, but an improvement in the current players’ movement, as well as an influx of defenders more adept at controlling the ball in tight spaces, is needed for this to be successful.

The tactical flexibility to play a more defensively sound formation on the road has been something that many have been calling for all season. It appeared to work here, as FCC came away with 3 points that were unexpected from all but the most optimistic supporters. However, the possession-oriented style that the team has been known for under Damet suffered considerably. Holding onto the lead for the entirety of the first half, FCC completed only 88 of 139 passes (63%). That statistic increased mildly in the 2nd half as the teams were on level terms (117 of 166 for 70%), but still far below the best games so far under Damet.

If FCC continues to play more defensively on the road, and more expansive at home, the team will pick up more points, and away games will get a bit uglier to watch. If this happens, we’ll have to wait and see what it does for the team’s development moving forward.