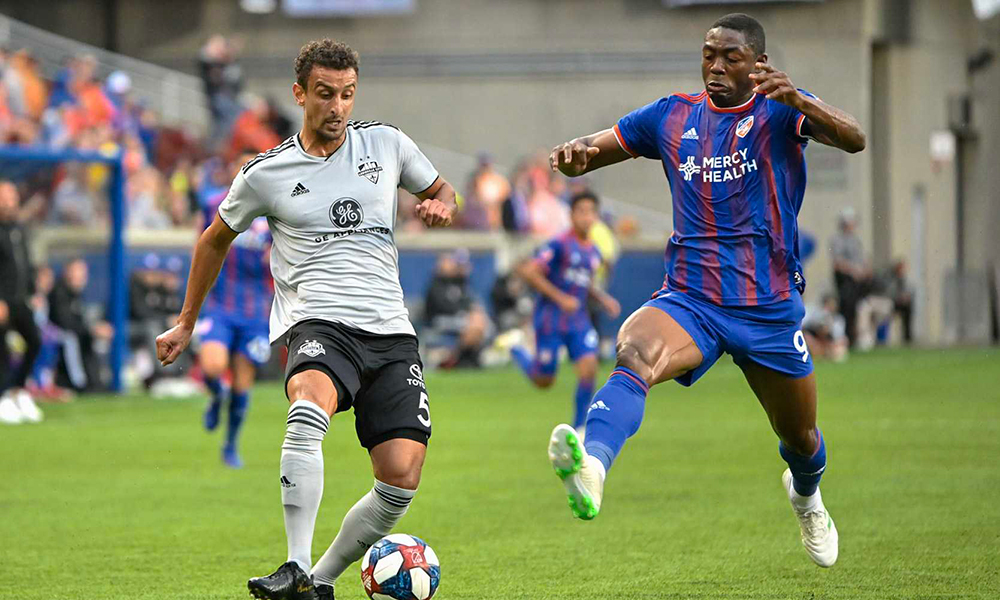 CINCINNATI — In 2017, FC Cincinnati was the Cinderella story of the U.S. Open Cup, with wins over the Chicago Fire and Columbus Crew of MLS before a heartbreaking loss to New York Red Bulls in the semifinals. On Wednesday, the roles were reversed. FCC was the MLS club and old USL rival Louisville City was the upset-minded visitor.

It took extra time, which should come as little surprise to anyone who has watched the “Dirty River Derby” in recent years, but in the 104st minute, Emmanuel Ledesma did well to win the ball in the air then got clear with a superb touch.

Ledesma said he wanted Fanendo Adi but he was trailing, so he picked out Kekuta Manneh at the far post who headed his cross into the net giving FCC an eventual 2-1 win in rainy Nippert Stadium.

“It was a good run by Kekuta,” FCC head coach Yoann Damet said. “It took a lot of patience for Manu to wait and put a good ball on the second post.”

Following his goal, Manneh somehow avoided a yellow card after he flung off his jersey in celebration as blue and orange smoke enveloped the Louisville goal below The Bailey.

The more than 200 LCFC fans who appropriately were seated adjacent to the MLS banner in the upper deck had a disappointing trek back down I-71.

“Last year, on social media, they talked too much,” said Ledesma of LCFC fans. “Now it’s time to go back home.”

It was a significant victory for FCC, not only because it was over a hated area rival and moved them into the round of 16 in the Open Cup, with the fifth-round draw coming on Thursday.

Damet also hopes the victory mark a turning point for his club which has lost four straight matches and currently resides in last place in the Eastern Conference.

“We’ve had a lot of ups and downs in the past weeks,” Damet said. “It wasn’t pretty, but we showed a lot of character.”

It was evenly-played first half by every measure but not exactly crisp. Both clubs were clumsy in their own end with errors leading to both goals.

Adi’s first goal since last September came in the 23rd minute when he scooped up a giveaway from City’s Paco Craig on the edge of the box and pounded it home for a 1-0 lead.

“I was happy tonight he was able to score,” Damet said. “I know what it’s like for a center forward, you want to score goals.”

Louisville equalized seven minutes later, however, when Lucky Mkosana slipped a shot past Przemyslaw Tyton to make it 1-1.

FCC just missed a second goal in the first minute of the second half when a free kick by Ledesma from about 30 yards out was headed off the post by Forrest Lasso.

Mathieu Deplagne nearly scored in the 70th minute again off a Ledesma set piece, this time a corner, but Niall McCabe deflected his header off the line.

It was the fifth time FCC went to extra time in U.S. Open Cup play. During the magical run in 2017, wins over Cleveland SC, Detroit City, and the Fire all went to extra time before another extra-time match was dropped to Red Bulls.

In their final season in the USL, FCC lost at Minnesota United on penalty kicks in the fourth round. Wednesday’s match would end more happily.

Making extra time that more challenging was that FCC didn’t have a full allotment of players on Wednesday with only 16 available.

Five players are preparing for the Gold Cup with their respective national teams with Alvas Powell and Darren Mattocks with Jamaica, Kendall Waston and Allan Cruz with Costa Rica, and Emery Welshman with Guyana.

It was confirmed by a club spokesman that Kenny Saief’s contract is in the process of being terminated. Saief currently is in Israel but he will be returning to his Belgium club Anderlecht to rehab his hamstring.

Damet had only five options on the bench including keeper Spencer Richey. Tommy McCabe was cup-tied. Greg Garza (calf) and Roland Lamah (hamstring) are out injured.

“It was tough,” Damet said. “We were 16 on the game sheet. It wasn’t pretty but we showed a lot of character.”

The “Dirty River Derby” was a heated affair when both clubs competed in the USL. FCC and LCFC were deadlocked 4-4-2 in the series coming into Wednesday’s match. FCC won the only prior U.S. Open Cup meeting 1-0 in the third round in 2017.

The Blue and Orange last played an MLS match on June 6, a 5-2 loss at New York FC, and doesn’t play its next league match until June 22 when it hosts LA Galaxy. But, a much-needed break will have to wait as FCC eyes its next U.S. Open Cup match next Wednesday.

“Everyone played with passion tonight,” Tyton said. “We wanted to win for the fans, so they still believe in us. Winning is confidence.”