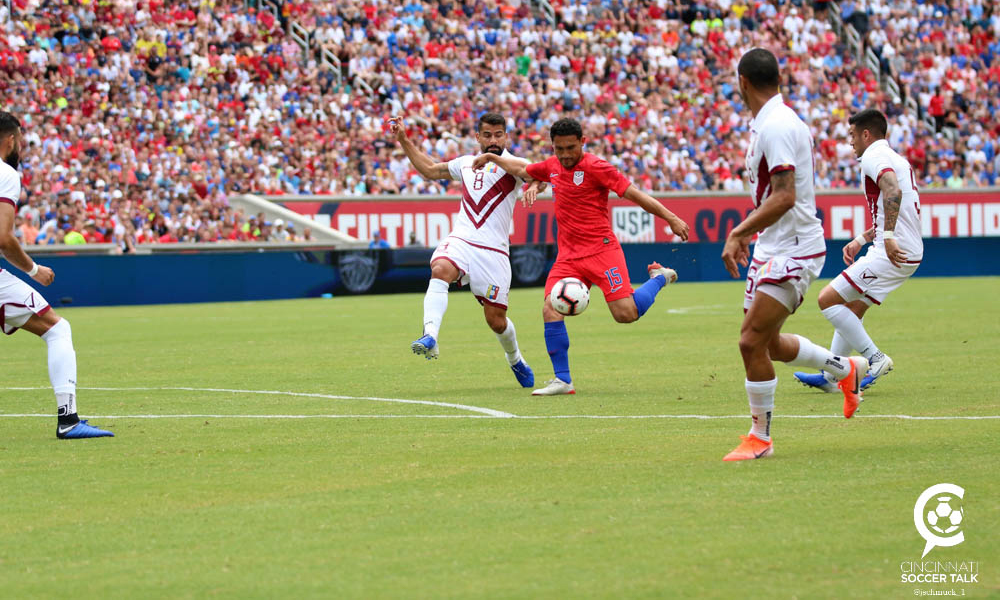 The United States men’s national team enters the Gold Cup seeking a return to relevance on the international stage but also on the heels of two friendly losses. The USMNT lost 3-0 to Venezuela on Sunday at Nippert Stadium.

Gregg Berhalter knows what some supporters are thinking.

After losing to Trinidad and Tobago on Oct. 10, 2017, to miss last year’s World Cup, the United States men’s national team has been seeking relevance again on the international stage. The Concacaf Gold Cup, beginning Saturday, is the USMNT’s first tournament since that infamous loss. Berhalter’s squad enters group play in a bad way.

The USMNT suffered two losses in four days — a 1-0 defeat to Jamaica on June 5 in Washington and a 3-0 stinger to Venezuela at Nippert Stadium on Sunday — the first two friendly losses since Berhalter took over as coach last December. Those aren’t the kind of results U.S. fans want to see as the squad tries to defend its 2017 Gold Cup title. But Berhalter stressed internal calm after Sunday’s loss at Nippert.

“We move guys one step closer to where they need to be,” he said. “I know what the narrative’s going to be — that we have no chance and that we’re going to lose or maybe not even make it out of the first round. That’s fine. We’ll deal with it.”

The U.S. is in Group D with Panama, Guyana and yes, Trinidad and Tobago.

Group play begins Tuesday at Allianz Field in St. Paul, Minnesota, against first-time entrant Guyana and FC Cincinnati’s Emery Welshman, currently on loan to Canadian Premier League side Forge FC. Following that is a chance to exorcise some demons against Trinidad and Tobago on June 22 in Cleveland and a match with Panama on June 26 in Kansas City, Kansas.

The U.S. is co-hosting the event, along with Costa Rica and Jamaica. Sixteen countries divided into four groups aim for the top two spots in each group to qualify for the knockout quarterfinal round, June 29-30. The semifinal round is July 3-4, and the championship is July 7 at Soldier Field in Chicago.

In the USMNT ranks, Berhalter played the last two friendlies without midfielders Michael Bradley and Christian Pulisic. Forward Jozy Altidore subbed in at halftime on Sunday. Those three and Paul Arriola are the only starters remaining from the World Cup qualifying loss.

Bradley and Altidore are established veterans, with well over 100 caps each. Pulisic is certainly a mainstay, though this is his first Gold Cup.

The 23-man roster, though, seems to have a trend of transition. Eleven of the players have eight or fewer caps. Who, if anyone, will emerge as a rising star?

It could be forward Tyler Boyd, who made his USMNT debut Sunday after using his one-time FIFA nationality switch from New Zealand and gave excellent service early against Venezuela. Or Weston McKennie, who has started twice this year but one could argue was mismanaged at FC Schalke 04 this season. Or right back Reggie Cannon, who Berhalter added to the roster on Tuesday to replace the injured Tyler Adams.

Whichever the case, it’s apparent after the June friendlies the club is still trying to find itself in Berhalter’s system. On Sunday, goalkeeper Zack Steffen committed a major gaffe, passing directly into the Venezuelan defense. His turnover led to the first goal.

After the match Steffen said his mistake was a byproduct of Berhalter’s preferred style.

“These games have showed us what we need to work on,” Steffen said. “That’s a good thing. I’m looking at it in a positive way.”