This week’s tactics installment of FC Cincinnati’s 3-1 loss to Colorado on Saturday focuses on Fanendo Adi as the false 9 and losing focus on defense.

This week FC Cincinnati played against a Colorado Rapids squad that sat behind the ball, let the Orange and Blue possess (to the tune of 60%), and looked to counter attack — at home. A loss never feels good, but learning to win in a way that sets you up for future success takes time.

There is a saying that practice doesn’t make perfect; perfect practice makes perfect. As a coach I hate this turn of phrase. If my team is practicing perfectly, they aren’t pushing themselves to get better. Sure, they would look good in each and every training session, but they would never improve. You can’t gain muscle without getting sore, you can’t gain endurance without getting tired, and you can’t become a great team by sitting behind the ball and playing for results.

Last week I wrote in this column (read it here) that FCC has made big improvements in recent matches. This match was no different. They kept the simple, possession-oriented approach seen against Montreal, continued the dynamic, defense turning long balls from the Red Bulls match and now added the use of Fanendo Adi as a false 9.

Playing a “false 9” means that the center forward (the #9 in soccer lingo) checks short of the back line often throughout the match, and the thrust up the field comes from midfielders running in behind the defense. This was seen in Allan Cruz’s 15th-minute chance. 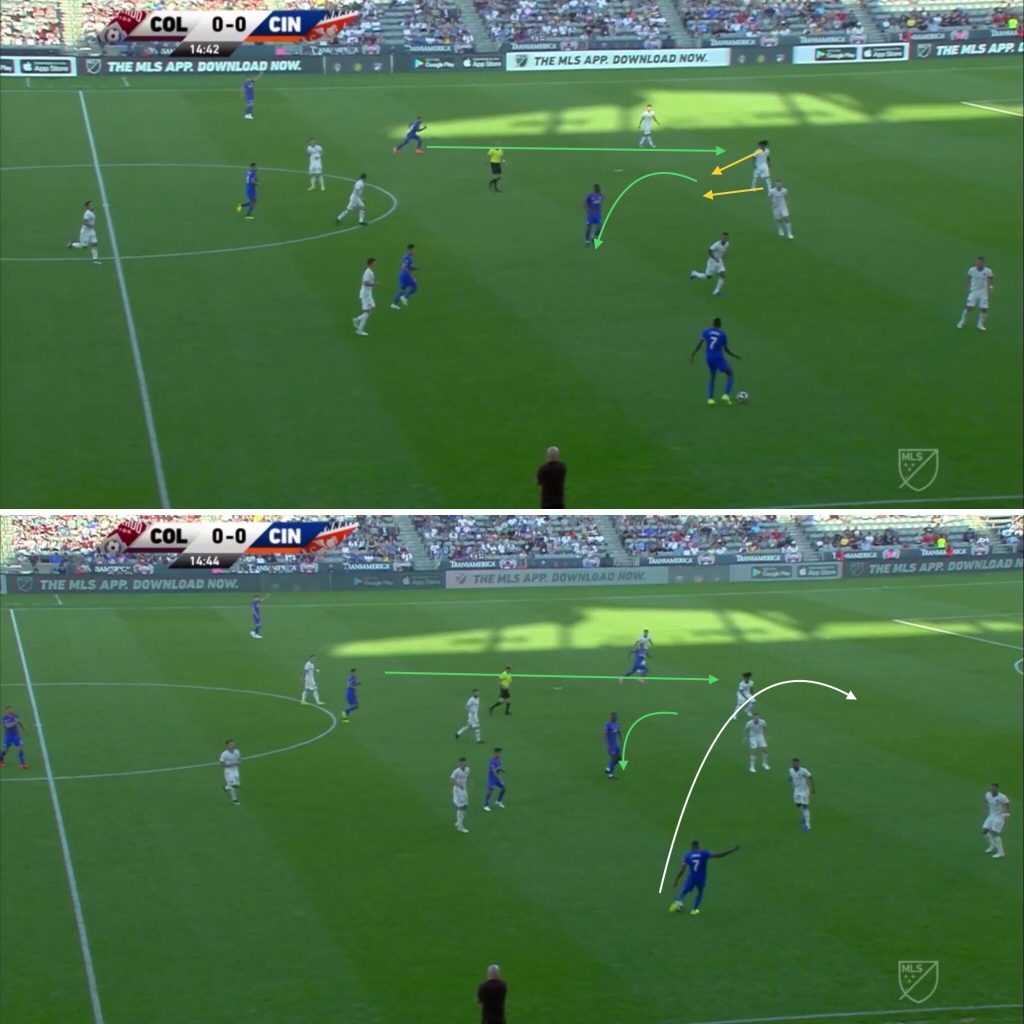 As Roland Lamah received the ball and cut inside, Adi checked short to provide him with a passing option. This action left the Rapids central defense with no one to mark and switched off. Cruz spotted this and made a run from deep which was cleverly found by a chipped Lamah through ball. Unfortunately, as has often been the case with FCC, the chance was left wanting.

In a moment late in the match, Adi came even deeper to receive the ball directly from center back Justin Hoyte. 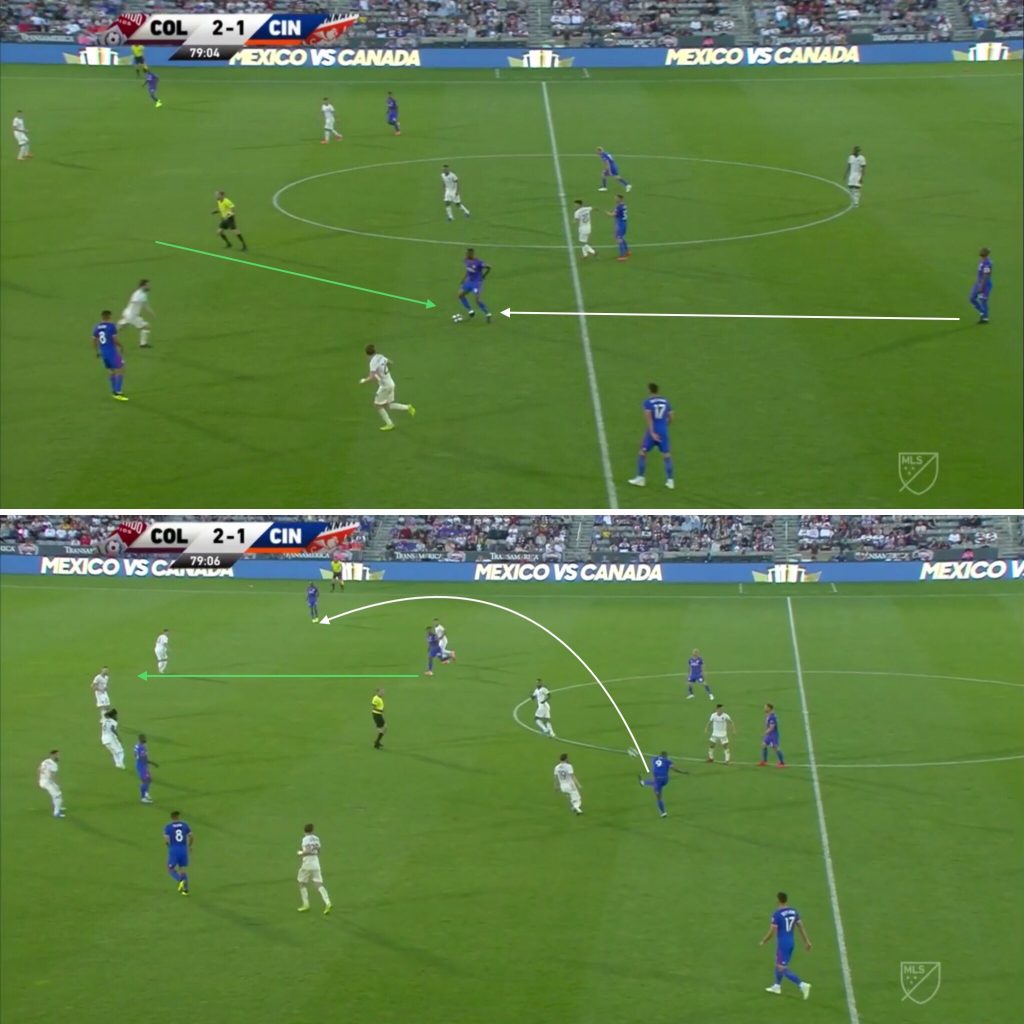 Adi found himself in loads of space, turned and spotted Lamah open on the flank. Alvas Powell saw the flighted ball, and the Rapids defense pulled out of shape and made a decisive run in behind. 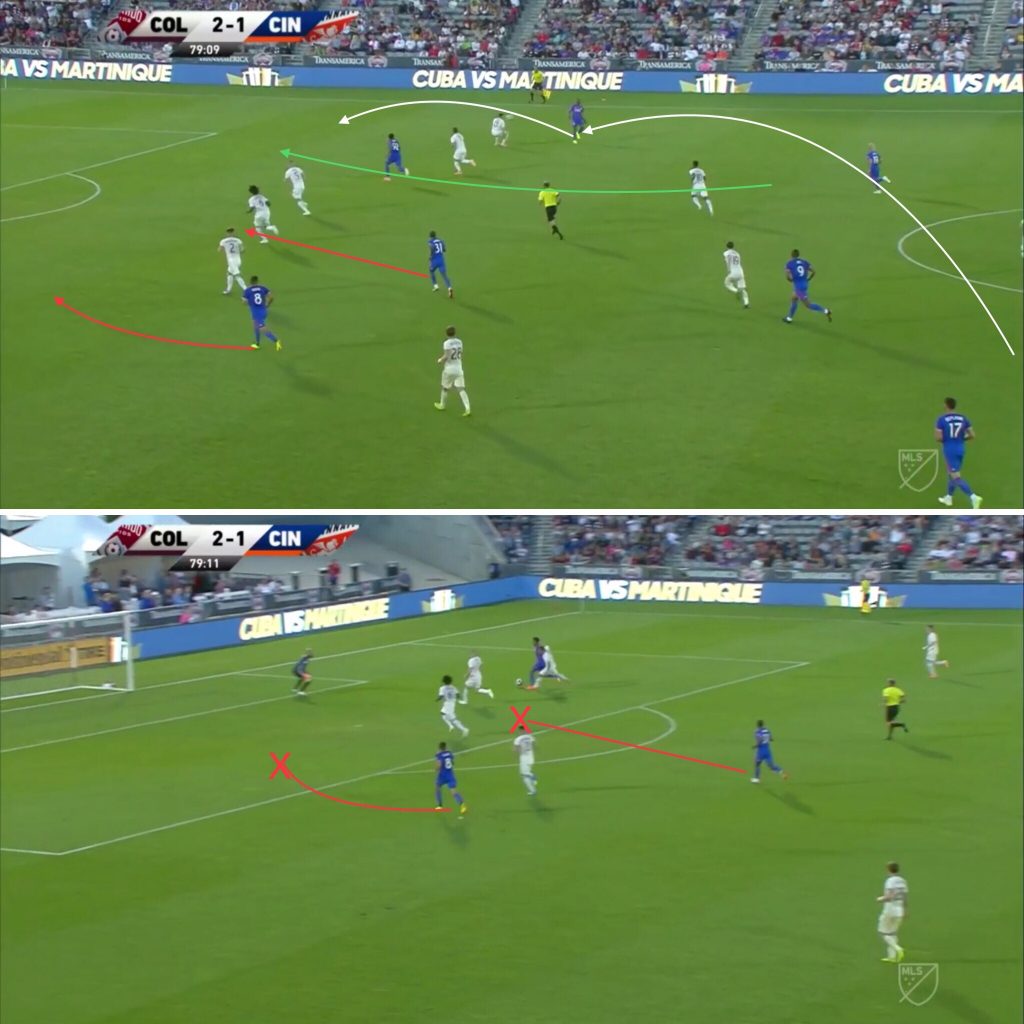 This chance was eerily similar to the near chance created by Victor Ulloa and Emmanuel Ledesma last week. This time Lamah’s flick found Powell, and if Ulloa and Kekuta Manneh made the necessary runs to provide Powell with options to cross, Powell might not have been forced into a shot from a poor angle which Tim Howard was able to keep out.

In the 72nd minute, this sort of “false 9” action created FCC’s only goal of the match. Adi came short to win a second ball off of a Nick Hagglund header. He played the ball underneath to Lamah, who found Manneh in behind the Colorado back line. This was not an ordinary “long ball” goal. 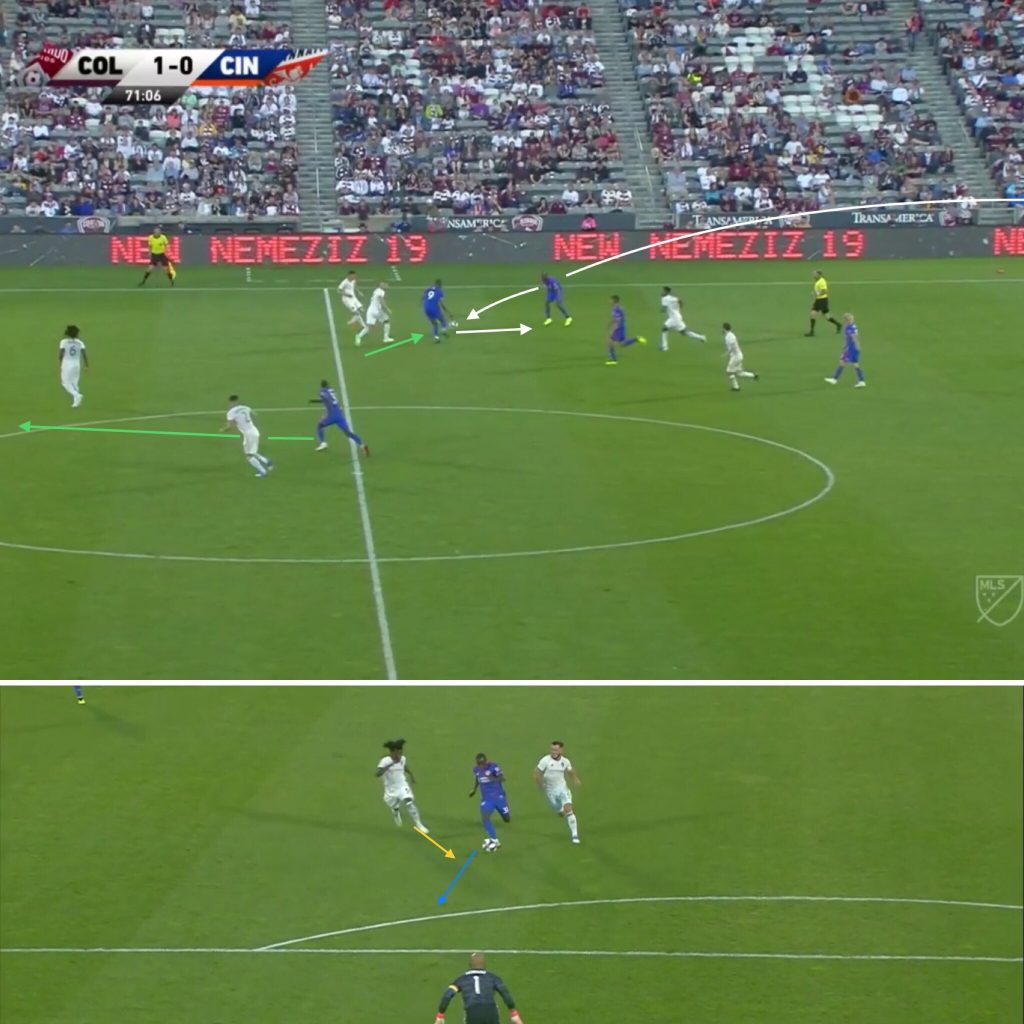 This goal was made by Manneh recognizing the pattern of play as Adi won the ball and making the run immediately. Lamah was on the same page and played the through ball without needing to look. Finally Manneh’s first touch left no doubts as it took him across the path of recovering Colorado defender Lalas Abubakar who was unable to make a challenge. A beautiful, though all too rare, goal for FCC.

For all the progress offensively, it’s becoming tiresome seeing FCC give up the kinds of goals that they gave up once again on Saturday. FCC was generally in good defensive positions, but individual players failing to maintain focus left opponents running free behind them. 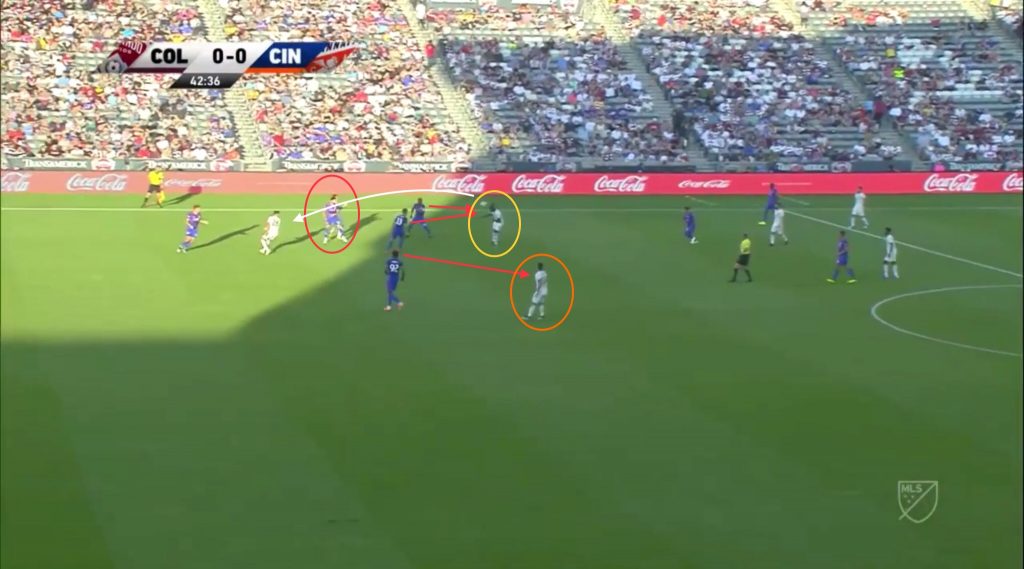 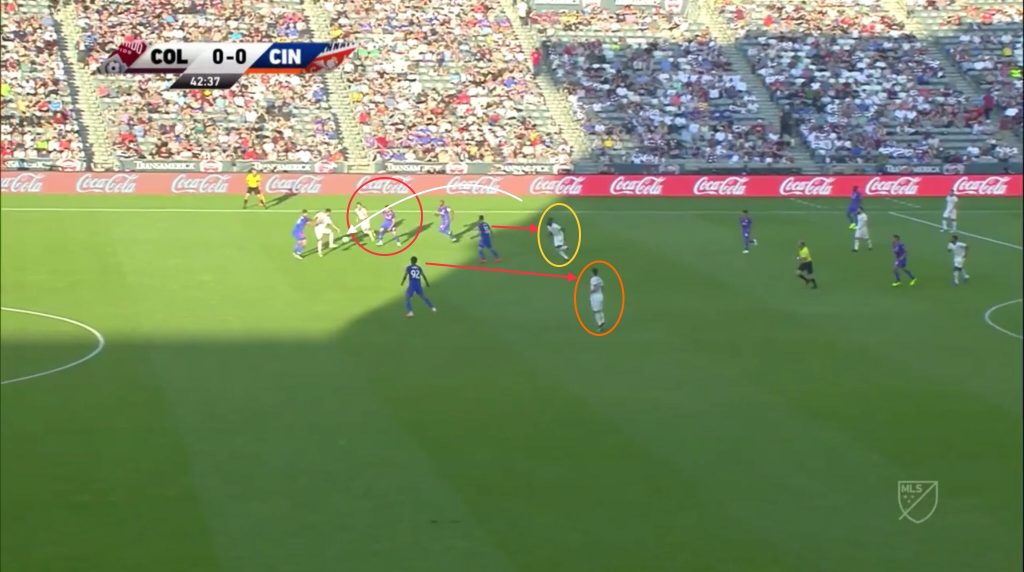 As Bassett cushioned the ball, Deplagne lost Nicholson. This forced Hagglund to retreat, frantically chasing the ball. But Powell, Hoyte, and Stanko all were goal side of the rest of the Colorado attack. 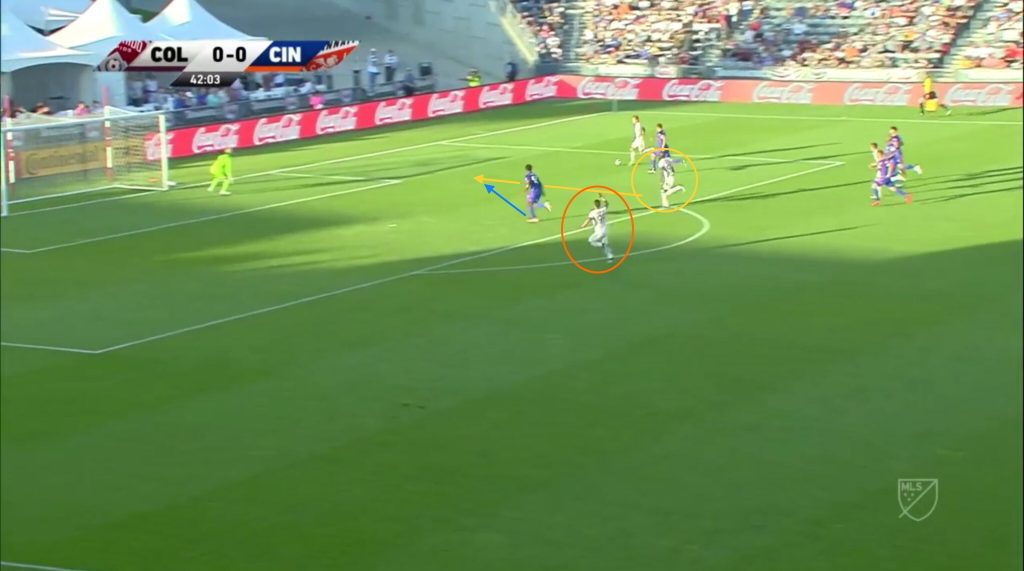 However, whether it was a lack of focus or a lack of hustle, Hoyte and Stanko allowed Kamara to sprint by both of them. This forced Powell to make the decision to pick up the near post runner, leaving Shinyashiki open to receive the cutback.

The second Rapids goal was similar. 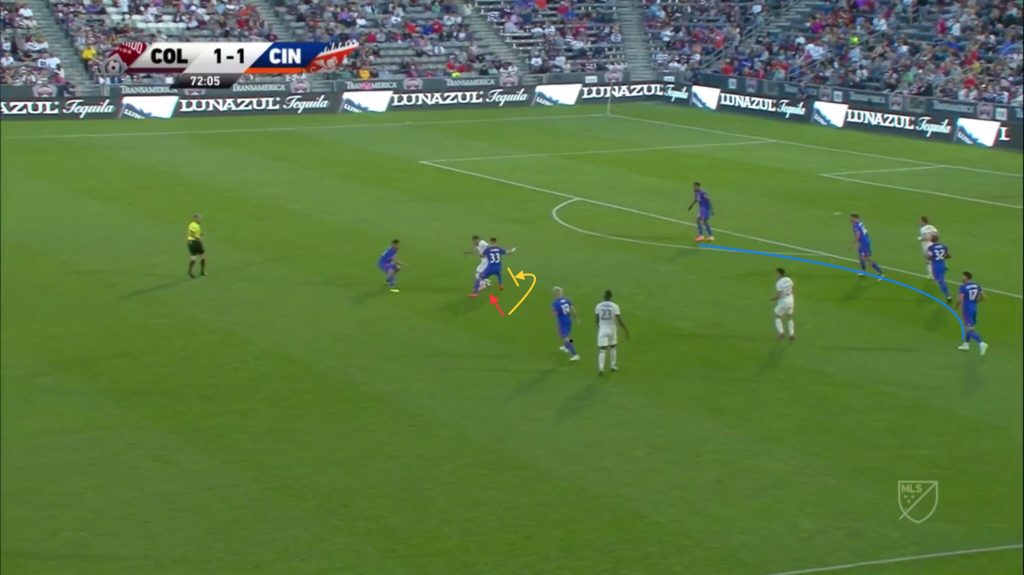 When Nicolás Mezquida found Diego Rubio in the center of the field, the FCC defense was fairly well placed with a nice shape to the back line, and Stanko was close enough to get immediate pressure. The first breakdown came when Stanko attempted to win the ball back immediately instead of attempting to prevent penetration by stepping between Rubio and the goal. 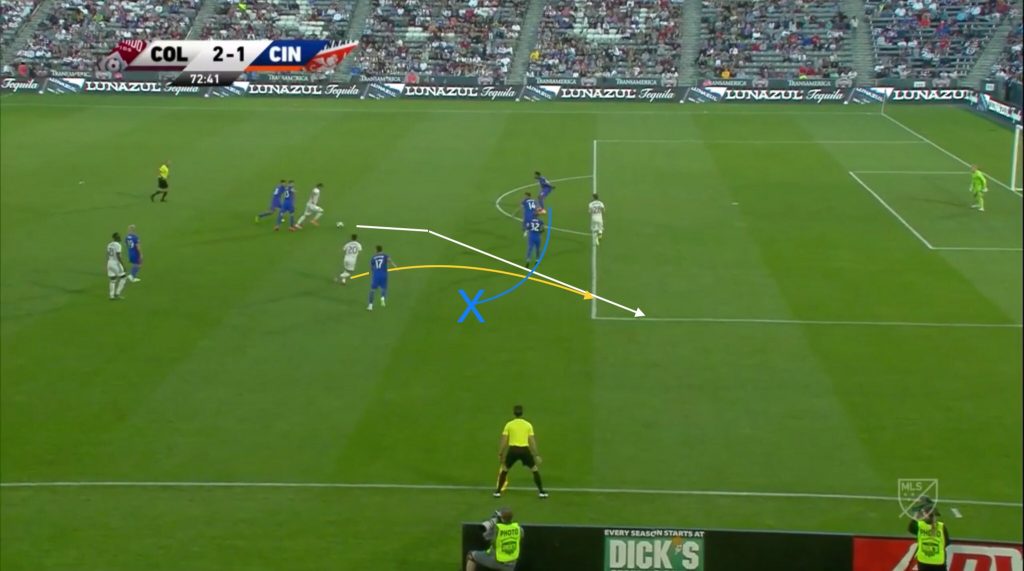 As Rubio broke free the FCC defense should have been on absolute alert, tightening to all of their marks. Deplagne was a bit far forward with his position but still close enough to Mezquida to prevent any danger. How Deplagne allowed Mezquida to jaunt freely into the box and receive the pass from Rubio is beyond understanding. The images say it all, with Rubio and Mezquida eating up 5 yards of space, while Deplagne remains within a few feet of his starting position. 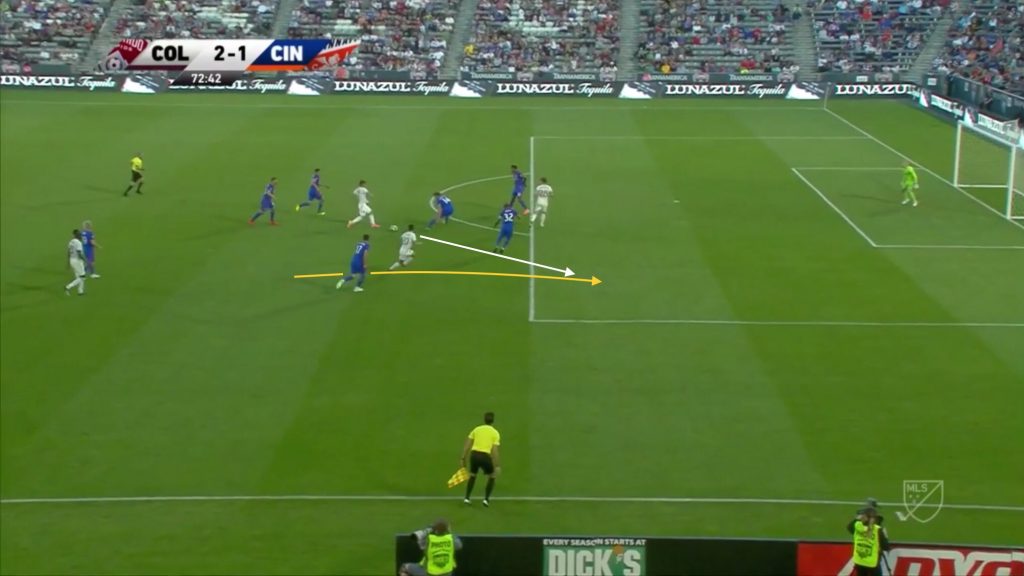 The third goal was off a set piece. Similar to what happened in Orlando, Victor Ulloa was tightly marking his man but failed to make an attempt at the header and instead elected to simply lean on his opponent. And as Dom Dwyer did the first time, Rubio made him pay.

When Losing is Progress

Soccer is a sport like no other in which a team can dominate a game and still lose handily. FCC’s passing accuracy has been good. They have been creating chances. And they are fun to watch. I would much rather be a fan of the Orange and Blue right now, losses and all, than a fan of a team that is eking out results by bunkering behind the ball or resorting to the long ball. I have faith that today’s losses will set the foundation for tomorrow’s victories. Unfortunately, we’ll have to wait and see when tomorrow will come.