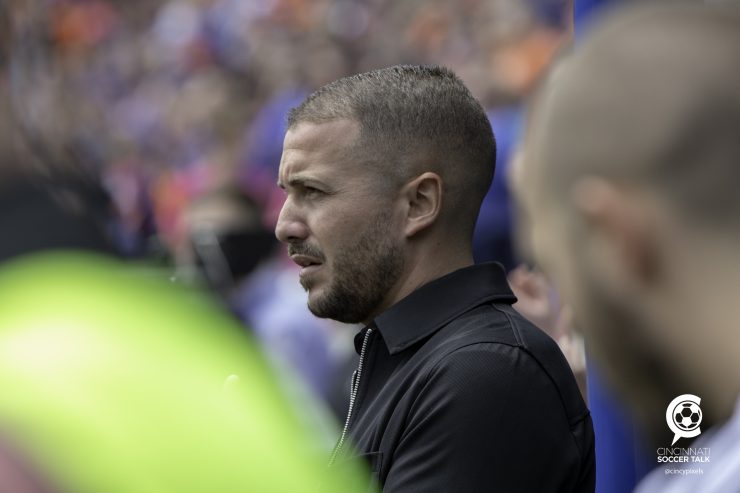 While plane issues delayed FC Cincinnati’s arrival to the Mile High city, the club failed to take off during the match on Saturday, falling to the Colorado Rapids 3-1.

While plane issues delayed FC Cincinnati’s arrival to the Mile High city, the club failed to take off during the match Saturday, falling to the Colorado Rapids 3-1. Rookie Andre Shinyashiki put the home side up in the 43rd minute before Kekuta Mennah briefly leveled the score in the 72nd minute. Colorado pulled ahead behind late goals from Nicolas Mezquida (73rd minute) and Diego Rubio (82nd minute). In addition to our Match Report, we will recap each individual player performance for the match.

Richey was hard done on first and third goals but should’ve saved the second. He had three crucial saves on the night starting with the 32nd minute save on a Kei Kamara header. I hate to jump on Richey for the Mezquida goal because he made several stellar reactionary saves on the night. Looks like he just mishandled the shot completely, and with FC Cincinnati looking clumsy going forward, he needs to make those stops to keep the team close.

Deplagne had his first poor game in Orange and Blue. He made several defensive errors in the first two Colorado goals. He lost Sam Nicholson in the build-up to the first Colorado goal leaving Nick Hagglund and Alvas Powell to defend too many men and space. In the second goal, he let Mezquida get behind the back line in way too much space. It was as if he was a passenger and not a participant in the play.

Hagglund might not have the technical ability of others, but the guy will out hustle any player. In the first goal, he tracked back aggressively but was unable to stop the play. You really couldn’t place the blame on him as Deplagne was outplayed. I did like his distribution on the evening. With 86% passing (70/82), he might free interim coach Yoann Damet to move Justin Hoyte wide during the Gold Cup.

Hoyte had 96% distribution on the night but was still a part of the back line that gave up three goals on the evening. He was caught out too far on the first goal leaving Hagglund and Powell exposed by Shinyashiki. He was caught semi flat-footed on the Mezquida goal, but you’d expect Richey to make that same nine times out of 10.

Powell just continues to disappoint me. A player that was brought in to be electric has just been blah. He completed just 44% of the passes in Colorado’s third. With a player known to get into the attack, he needs to do better. Backtracking, he seems indecisive. While he was left exposed several times on the evening, Powell needs to manage opponents off the ball runs better.

Stanko did a nice job in the first half settling things down for FC Cincinnati, but you’d like to see him on the ball just a bit more. At the deep-lying role, he was able to achieve 86% passing but 7 of his 42 completed passes combined in the final third.

If FC Cincinnati wants to be successful, they need to get Amaya on the ball more than 23 times. While he played more of the 8 role, Amaya didn’t touch the ball in the box once. That is unacceptable. Colorado did a nice job to keep FC Cincinnati out of much meaningful possession. Amaya could increase his off the ball movement to open up space to help the offense.

Ulloa had a better night but not quite the quality of the Montreal win. He stepped up his game to complete 83% of his passes (39/47), but he was unable to get many lateral passes to get guys forward. Like Amaya, he needs to move off the ball better to get to the top of the box to confuse the defense.

Lamah was active all night for FC Cincinnati. FC Cincinnati should’ve gotten on the board when he broke down the right in the 13th minute. Lamah had a wonderful ball between three FCC players, but they all just overran the ball and couldn’t get a shot. Lamah’s creativity showed again with a great pass on Kekutah Manneh’s goal. You could see he was reading Manneh and hit a pitch-perfect pass behind the back line. For a team that has lacked creativity, Lamah has been the lone bright spot in the attack this season.

Allan Cruz was a mixed bag but showed some nice creativity in the 16th minute for FC Cincinnati. Lamah hit another nice pass between the two Colorado center backs, but Cruz was unable to bring the ball down for a clear shot on goal. Other than that, he didn’t get involved much and completed just 22 of his 29 passes.

Adi found himself 1 v 1 on the goalie in the 42nd minute. The designated player must put his shot on frame instead of over the bar. Adi’s had decent movement at times in the false 9 role, but the scoring drought looks to be messing with the striker’s confidence. Adi looks dangerous, and if he can just get one goal, the flood gates might come open.

Bone was able to get his first appearance after a long layoff from a shoulder injury. He was active all over the pitch but still showed signs of rust and was unable to create chances in the final 30 minutes.

Kekuta Manneh gave FC Cincinnati fans a sliver of hope with his great run for the goal. Lateral movement like that has been lacking so far for the club. FC Cincinnati needs more from him, however. Three of four completed passes is just too few from one of the players expected to be a key contributor for FC Cincinnati.

Darren Mattocks came in as a late sub for Roland Lamah after the third Rapids goal.

I liked some of the build-up play early for FC Cincinnati, but it was unable to take its chances created by Roland Lamah. Too often though, FC Cincinnati was stifled once they reached the final third of Colorado. While FC Cincinnati completed 461 passes to Colorado’s 279, Colorado had 75 passes to FCC’s 73 in the final third. The away side had two chances in the Rapids box and didn’t complete one. If the Orange & Blue can’t find a way into their opponent’s box, it will continue to be a rough year for the expansion side.