Brad breaks down those key moment in FC Cincinnati’s loss to the New York Red Bulls. There were positive moments along with the two goals given up.

When Bobby Warshaw of MLS’s Extra Time came on the Cincinnati Soccer Talk podcast last week, (listen here) he commented that one of Yoann Damet’s primary tasks as the interim manager would be to catch up the FC Cincinnati squad on fundamentals. Something that most MLS teams had figured out by this point in the season.

The first match under Damet showed an emphasis on short, simple passing and a possession-based approach. The second match was a throwaway, as Damet and the team were not prepared to play with injuries in the heat of Orlando. FCC was on the back foot pretty much from the beginning. The question is, was there any progress made in FCC’s loss to Red Bulls on Saturday?

Breaking the Defense Down

The short passing game that FCC employed against Montreal is straight forward. A team moves the ball quickly from point to point on the field waiting for the defense to make a mistake as they shift to cover the new gaps created with each pass. This tactic is effective and is an absolute necessity in the toolbox of any competent team. It relies on the defense to beat itself. Teams need to be able to open up the field with a dynamic range of passing in order to intentionally pull the defense out of position when necessary. Fans had yet to see FCC’s ability to go out and break a defense … until Saturday. 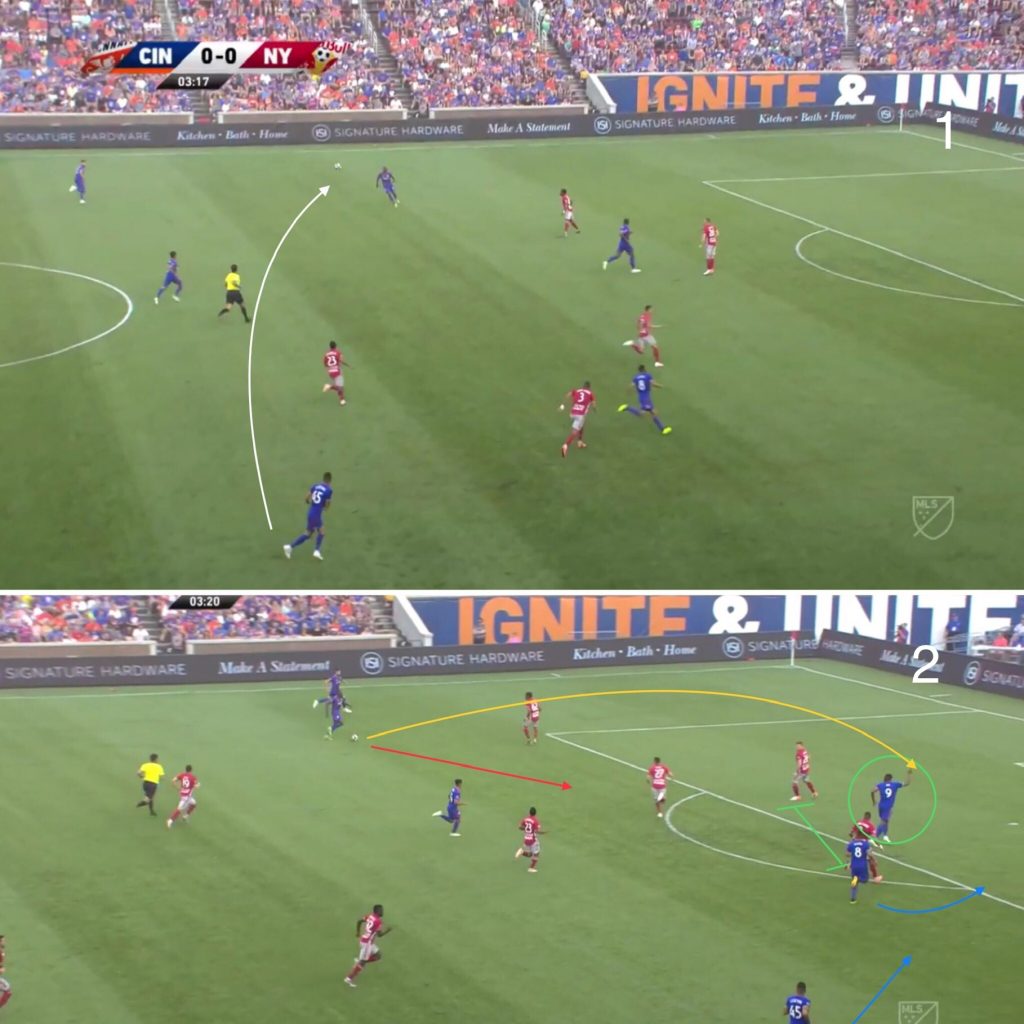 In the 4th minute of Saturday’s match, Emmanual Ledesma cut the ball back inside and hit a beautiful long pass across the field to Roland Lamah (1, above). The Red Bulls defense was expecting him to play the ball down the line to a streaking Victor Ulloa, and the switch of play turned them inside out. This sort of dynamism was not often seen in FC Cincinnati’s first 13 matches. Unfortunately, Lamah chose to dribble inside and unleash a long-range effort on the goal instead of playing the ball into Fanendo Adi who had found space between the Red Bulls center backs. (2, above)

Don’t think this was simply Manu being Manu and using his own creativity to dictate play, A similar pattern nearly works later in the match. 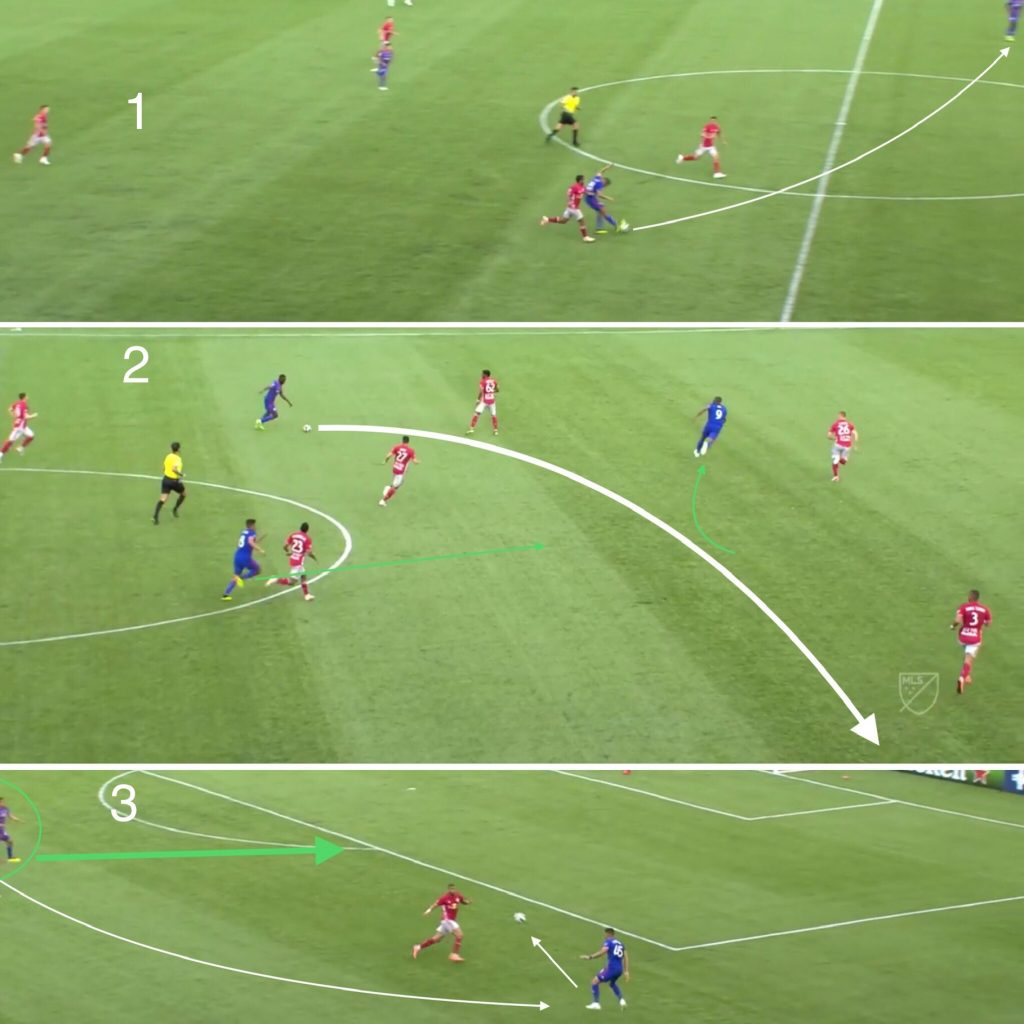 Victor Ulloa started the play by picking up the ball near the midline and finding Lamah open on the left (1, above). Adi made a great curling run, pulling with him Tim Parker and the rest of the Red Bulls back line. Ulloa continued his run through the center. Once again, instead of playing the obvious ball into Fanendo Adi, Lamah turned the Red Bulls defense around by switching play to Ledesma (2, above). Ledesma attempted to cushion the ball first time back into Ulloa’s path, but just under hit it allowing Amro Tarek to get his head to the ball and disrupt the play. Had Manu’s pass cleared Tarek and found Ulloa, this could have been the prettiest FCC goal that we’ve seen to date.

Young players often wait to make runs until their teammates are passing them the ball. They have yet to learn that the runner dictates the pass, not the other way around. If a player wants the ball, he or she needs to make the run and ask for it. When teams are clicking, the runs and passes seem to happen simultaneously. It is said of teams playing this way that they have chemistry.

One thing that supporters and pundits alike have chastised the FC Cincinnati team for is their lack of running off the ball in key situations. FCC players often watch their teammate with the ball, waiting to see the decision that he will make before making a run. The team didn’t appear to have chemistry. The brilliant combination, executed by Fanendo Adi and Roland Lamah, (who had played only a hand full of minutes together before  Saturday) pictured below was a bit of chemistry that FCC hadn’t shown often this season. 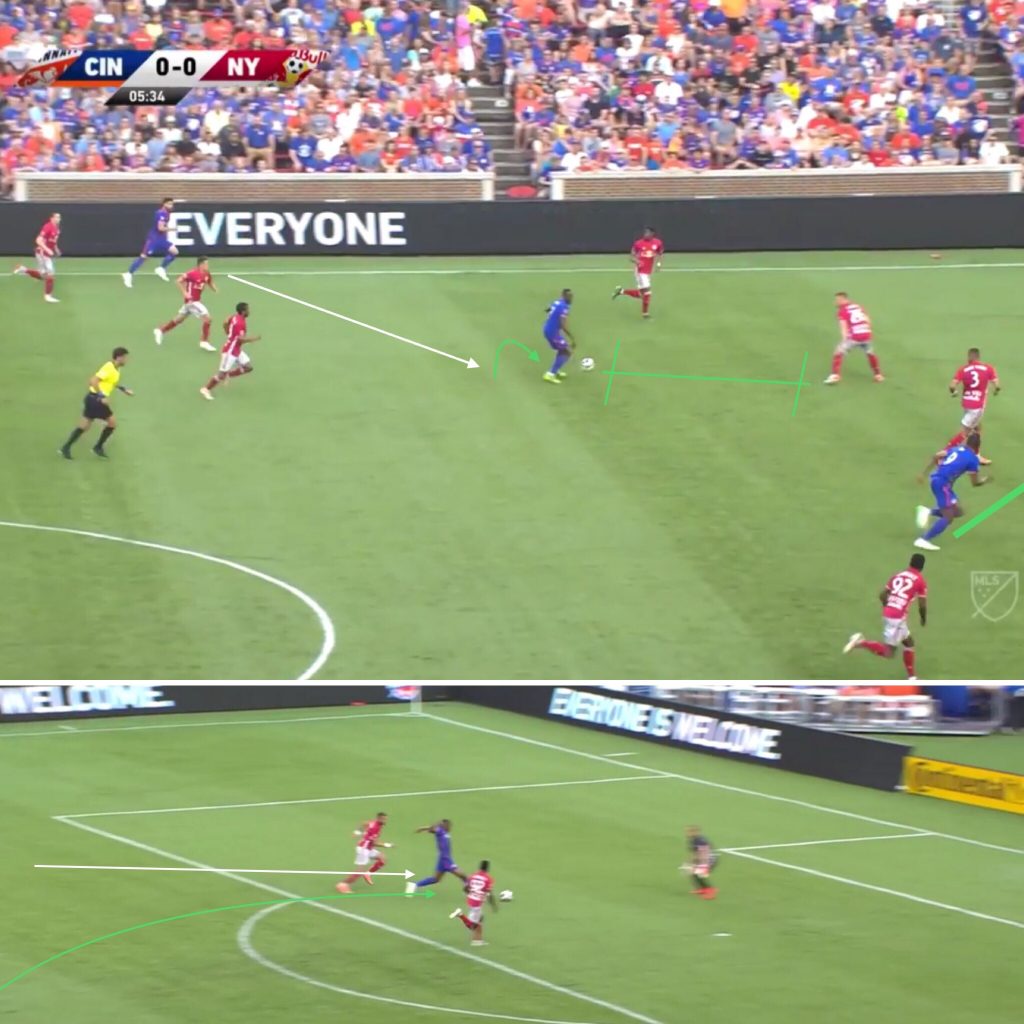 As Lamah received the throw in and turned upfield, Adi was already making his run. This was one example of many throughout the match of FCC showing team chemistry. Instead of relying on the passage of time to learn each other’s tendencies, they have been coached to read visual cues throughout the game. When Lamah received the ball and began to turn, Adi read that he had no pressure. The visual cue of a midfielder turning up the field with no pressure cued Adi to make his run and create an early chance that could have shifted the balance of the match.

But Deplagne Ruined It, Right?

There is no doubt that Mathieu Deplagne made a big mistake by getting the ball caught under his feet. But the rest of the back line was sorely out of position when it happened. 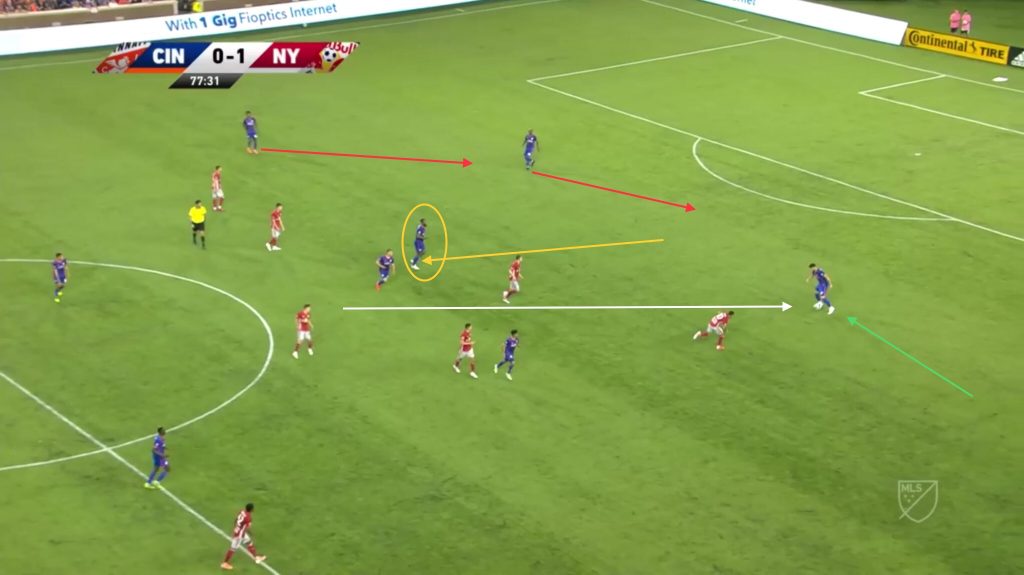 When possessing in the defensive third, it is important that teams maintain proper shape to provide passing options as well as defensive cover in case of a turnover. Just prior to Deplagne’s gaff, Kendall Waston got caught a bit forward trying to win a ball. As Waston stepped into the midfield, the rest of the back line failed to pinch toward the center to cover the gap that he left, leaving Deplagne exposed during the back pass.

The second Red Bulls goal was also preventable and once again began with Waston getting caught forward. 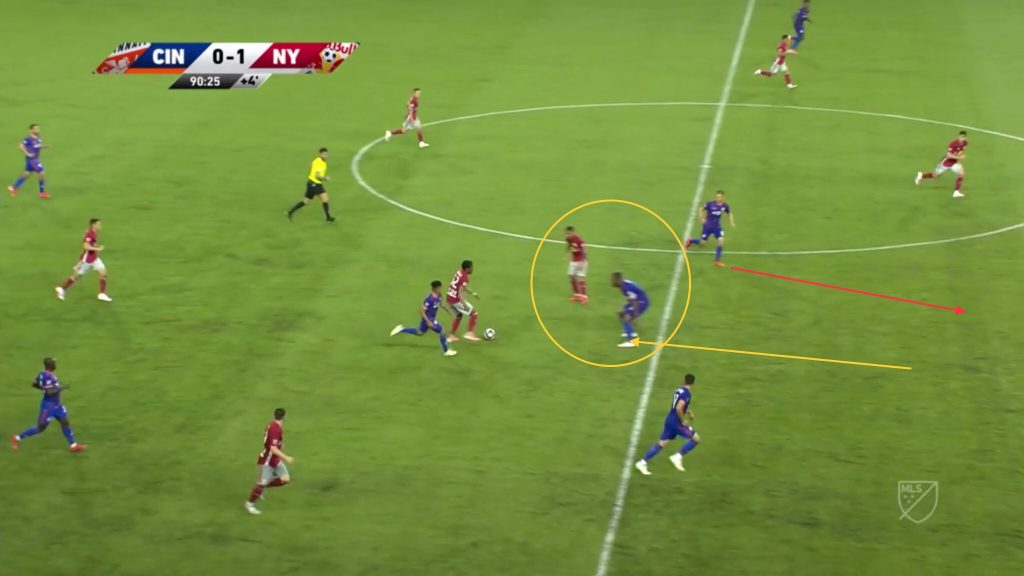 It appeared as if Waston was attempting to mark a Red Bulls winger instead of passing him on to Caleb Stanko. Either way, once he made that choice Stanko needed to drop in to cover Waston’s position. 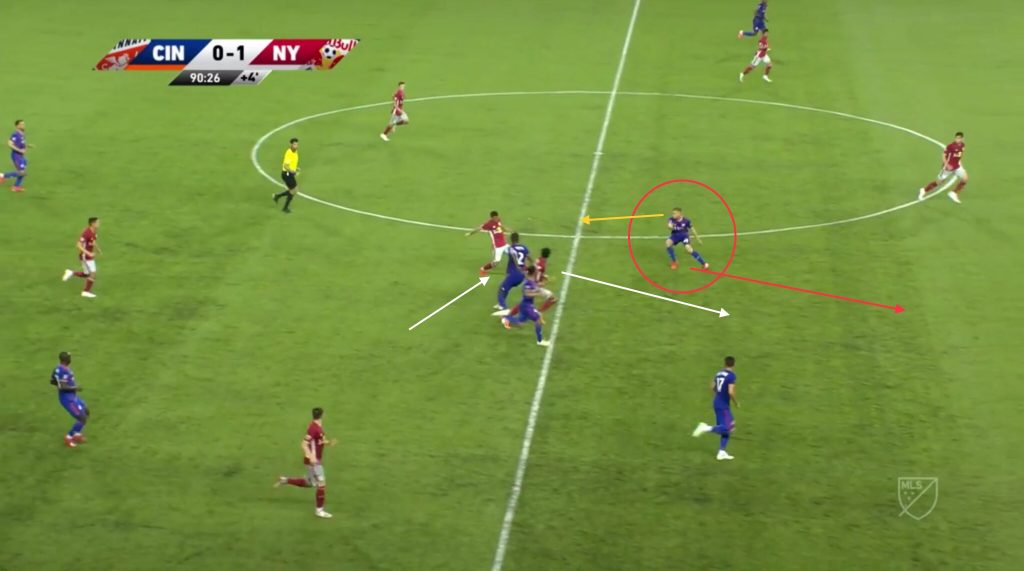 Initially, Stanko did, but then he stopped his recovery and stepped toward the ball. That move freed up the return pass to Omir Fernandez and he went breaking through the first line of the FCC defense. He then lunged for a tackle and missed, freeing Fernandez to play the ball into the attacking corner. 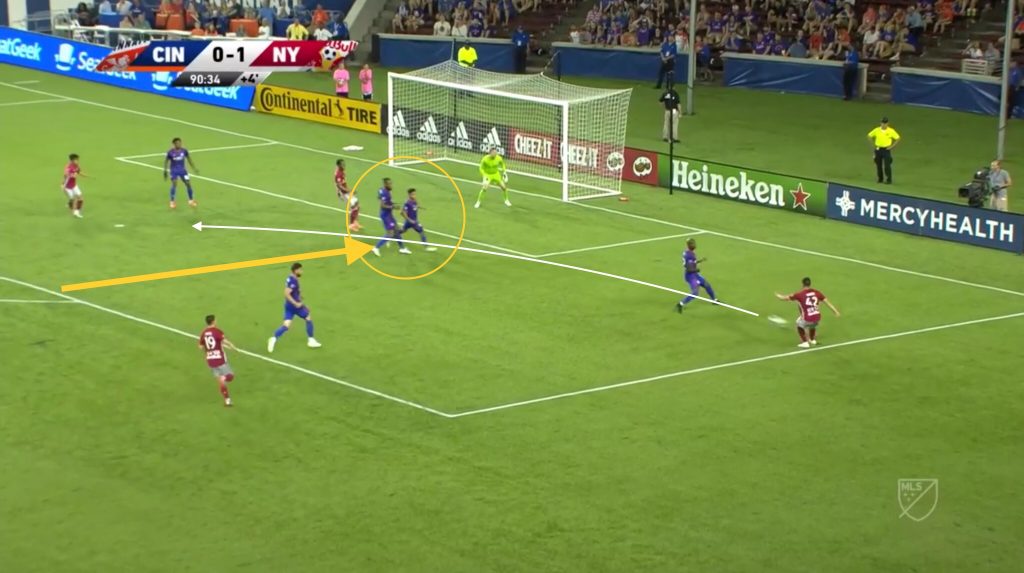 With the ball wide, Justin Hoyte moved to challenge and Frankie Amaya appropriately dropped in behind to cover the space Hoyte vacated. Another breakdown occurred when Kendall Waston, just recovering from being caught upfield, dropped into the same space already occupied by Amaya. Still, Fernandez should have been well covered as Alvas Powell was in a position to pick up his checked run. 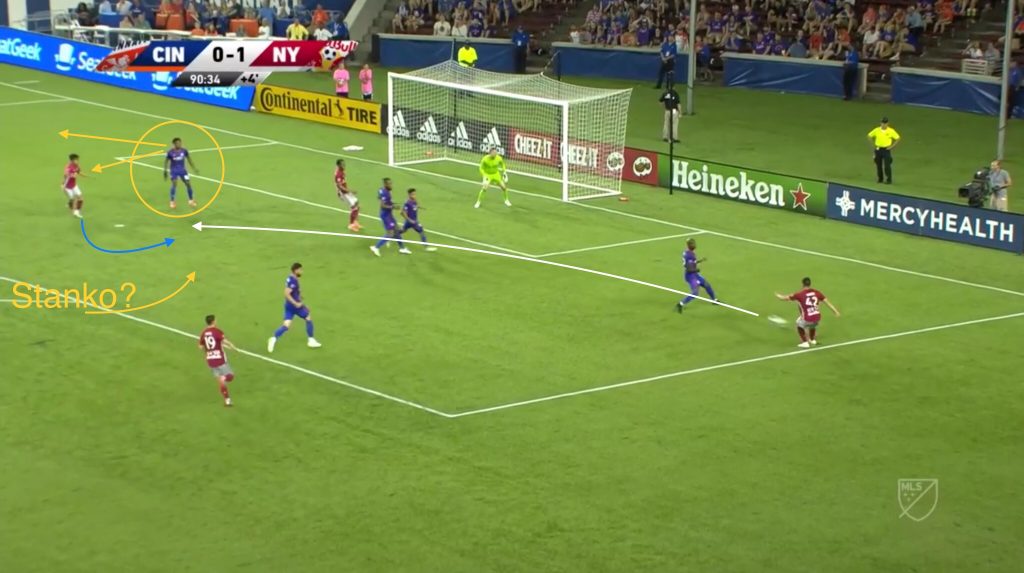 Many have put this goal squarely on the shoulders of Powell, as he allowed Fernandez to get ball side of him to score the diving header, and largely they are correct. However, Powell was also attempting to marshal the potential deep cross to the back post, and thus was caught in two minds when the ball was played in. Had Waston recovered appropriately, or had Stanko made the effort to track back into the box after missing his tackle, Powell would have been able to correctly cover the back post leaving Fernandez to either of his FCC teammates.

There have been some major improvements in FCC’s play under Damet. Many, including myself, were quick to blame a lack of reinforcements and the heat for many of the problems FCC experienced in Orlando. The mistakes outlined above that occurred late in the match against the Red Bulls could be attributed to fatigue as well, but is this a viable excuse?

In an interview prior to Saturday’s match Emmanual Ledesma said, “The training is very difficult now. It’s gone from zero to 100 in a couple of days. Everybody feels tired, so the first week you’re gonna feel sore, but give us one or two more weeks to feel good and be flying again.” Whether or not he meant it as such this gives us a clue as to the differences in intensity during training under Damet compared to that of former head coach Alan Koch. Hopefully, given a few more matches, we’ll begin to see these sorts of basic positional mistakes become rarer.