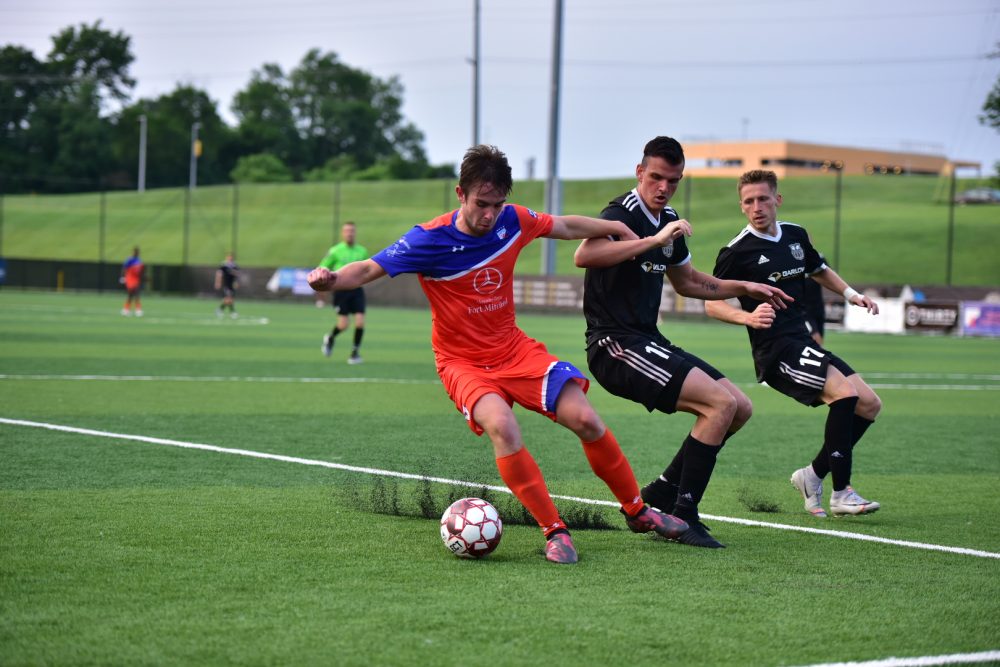 It was a first-half affair at Northern Kentucky University Stadium as the Cincinnati Dutch Lions FC pick up two goals in the first half. From the first touch, Cincinnati established a possession-based strategy. Unlike their previous few matches, Cincy was not pressed and found plenty of space to work with. West Virginia came into the match looking for turnovers and mistakes. Cincy gave them little to work with on both accounts.

Patience and Switching the Field

The key to breaking down a club like the Alliance is patience and working the field for an opening. A solid performance came from Cincy’s midfield as they worked both sides of the pitch looking for openings. When West Virginia had the right side sealed, Cincy flipped the ball back left. Sometimes that took a long horizontal pass to a wide-open player. During those moments the Dutch Lions lurched forward and opened up passing lanes. Tonight’s victory was a full team performance and once Cincinnati got ahead these tactics chewed minutes off the clock.

Cincinnati struck early and leading goal scorer Alex Willis was served a ball inside and put it away in the 14th minute. West Virginia continued to defend with two lines of four and rarely attacked Cincy until after they hit the midfield mark. At some point when trailing, it is time to get aggressive. The Alliance picked up three yellow cards in the first half but they were on the defensive side of the pitch. Pressing Cincy should have been the goal as Cincinnati has proven they will score goals even in their 3-2 loss last week. The key is outscoring Cincinnati and to do that you need to take risks and at times dump the defensive shape and press the ball.

After Willis put CDLFC up early, the Alliance took extra caution defending him. Alex Greive was able to get more space and nearly added another goal minutes after the first. In the 32′ he got his chance. Jorge Guinovart created a turnover in midfield and streaked down the pitch to fire a shot. Martinez somehow was able to save the ball but the deflection was picked up by Greive. The second attempt was stopped by Martinez at first glace but the side official signaled a goal. The stop came a second too late and the ball crossed the line right as the keeper stopped it near the post.

Cincinnati Dutch Lions came into the second half playing a similar style. Possess the ball, chew up time and be patient. The rewards were fewer but the Alliance found few moments to strike. A bad pass backward by the Orange and Blue nearly gave them one but Keagan McLaughlin answered the call. Finally, in the dying minutes, West Virginia sent numbers forward and worked Cincy’s defense. They earned a couple of free kicks and they were well taken. McLaughlin and the goalpost saved one and the other was blocked in the box. A little too late and Cincinnati walked away victors. These two teams still can take lessons away from this match, they will see each other two more times.

Cincinnati Dutch Lions play again tomorrow in a friendly vs Old Bhoys and next Friday vs Chicago FC United in league play.