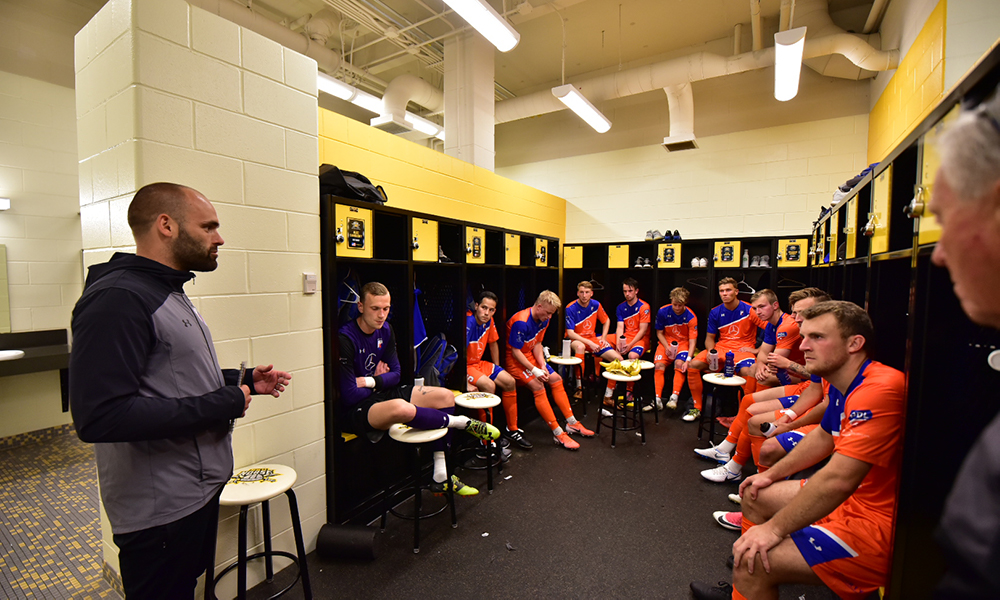 Cincinnati Dutch Lions FC recently parted ways with coach Paul Nicholson and general manager Brandon Ponchak after announcing it would not play USL League Two matches this season because of the COVID-19 pandemic.

Prior to USL League Two announcing it was cancelling the 2020 season because of the COVID-19 pandemic, the Cincinnati Dutch Lions announced it would not be playing any USL 2 matches due to the pandemic. For those of us that have been around the Cincinnati soccer scene for a while, that was an “uh-oh” moment.

CDLFC continued to work toward putting together a squad to play in Ohio Valley Premier League matches and participated in a number of the OVPL friendlies over the last couple of weeks. Despite the club’s participation, club ownership was not at any of the OVPL friendly matches.

On July 23, CDLFC ownership informed general manager Brandon Ponchak and coach Paul Nicholson that their services were no longer needed. Being the pros that they are, they have coached multiple matches since finding out they would no longer be part of the club. They will coach two more matches today at Town & Country Sports Complex in Wilder, Kentucky, at 6 p.m. and 8 p.m.

“I’m extremely grateful for the opportunity the club gave me following my playing career and the support I received from everyone connected with CDLFC,” Nicholson said. “I learned so much about myself and coaching during my time with the club.”

In a social media post, Ponchak said, “Ownership took a chance on me in March 2017 and I could not be more appreciative for the four seasons to be involved with the club.”

As Cincinnati continues to put the puzzle together that will represent the city in its bid to be a host city for the 2026 World Cup, hopefully CDLFC is still a piece of the Cincinnati soccer landscape. With the club headed in such a positive direction prior to the COVID-19 pandemic, and the two men that have worked to get the pieces of the club together, it appears today could be the last time to enjoy a Cincinnati Dutch Lions match.

The league office did not comment about the future of the club, but we do know that the league really wants to keep a team in the Cincinnati market. For amateur fans, it’s hard to watch the University of Cincinnati shut down its men’s soccer program and then see the Dutch Lions make this change and have things up in the air.

It appears though that there is a lot of opportunity for soccer to still be played in the Queen City with the OVPL having a huge Cincinnati presence.

“It’s a sad time for local soccer without our SG’s home base but we will continue to support our players and coaches from whatever sidelines we find ourselves on,” Super Mega Ultra founder Tina Harris said.

Here’s to the hope that soccer fans in the Queen City can help put all of the pieces together here in Soccer City USA.

“Overall, it was such a good program that created a professional environment,” said former Cincinnati Dutch Lions player Connor Rutz, now with Detroit City FC. “When I got to the professional level and having to adapt to higher expectations and standards, it was nothing new for me. From day one, all of my interactions with the ownership, staff and players has been a model for other USL 2 clubs to see as the standard.”

Three years ago, there was speculation around whether the Cincinnati Dutch Lions were going to continue to operate and play in the then PDL (now USL 2). The club had one win in 2016 under indoor soccer Hall of Famer Terry Nicholl. In his time with the Dutch Lions, Nicholl had a record of 15-21-8 and also had the Dutch Lions participating in the U.S. Open Cup in 2016, losing to Indy Eleven. That was a rough year, but a new ownership group had come in and made an attempt to breathe new life into the club.  Nicholl continued to work with the club, and his experience was valuable. He recently stepped away from coaching this year.

Soccer fans in the area were excited that new ownership seemed to have interest in keeping the club in the greater Cincinnati area. With new ownership also came a move to a new venue and some new pieces to the puzzle.

Sid Van Druenen led the club to a 5-6-3 record in 2017, finishing fourth in the restructured Great Lakes Division. Ponchak also joined the Dutch Lions in 2017 as the general manager, and he had a tough task ahead of him with the new ownership group and a change to a more competitive division. That year saw Flint City, KW United, and West Virginia all finish above the Dutch Lions with winning records. CDLFC appeared to be on the right track until a stretch of six games where they only earned six points to end the season. In the last seven matches of the season, it scored a total of three goals, all of which came in one game. CDLFC didn’t score an entire goal in the month of July 2017.

When asked what the biggest challenge was coming into 2017, Ponchak said, “Being relevant in a market that had been largely unsuccessful.’

Soccer history up to that point in the Queen City had seen a number of teams come and go. Ponchak was determined to make CDLFC a success on the lower division soccer scene. The soccer puzzle seemed to have a couple of pieces missing.

In 2018, the crowds grew at NKU Soccer Complex, with the newly formed SMU supporters’ group, welcoming fans and opponents to NKU in style. From cow bells to bubbles after goals, the SMUs added to the fun of home matches and some road trips as well.

“The rivalry with Dayton, the $5 footlong derby, has been a lot of fun,” Harris said. “Cincy still holds the Subway Cup!”

Ponchak took to social media to bring more and more fans to know Cincinnati’s “OG” Lions.  It appeared as though Ponchak had begun to really put the outside of the puzzle together and was beginning to fill in the inside part as the team worked through the 2017 offseason and into 2018. CDLFC had seen attendance grow in each year from Ponchak’s arrival in 2017 heading into 2020 after having more than 450 people in attendance at the season finale at NKU Soccer Stadium in 2019.

CDLFC’s success in 2018 and 2019 was largely in part to Nicholson, a former FC Cincinnati player and key piece during FC Cincinnati’s 2017 USOC run. Nicholson joined CDLFC in 2018 as the new coach and has compiled a 12-7-9 record in his two seasons. He also has the least number of losses in a season in 2019 (three), and only missed the USL 2 playoffs by two points last year, right below the eventual champions, Flint City. The combination of Ponchak and Nicholson brought the Dutch Lions to a point where they were becoming an important part of the Soccer City USA puzzle that had recently seen success at the USL level and in MLS starting in 2019.

USL 2 is known for being a players’ development league that prepares them for the next level. At the time of this article, CDLFC has had 21 players move on to sign professional contracts. Of those players, 17 were signed to contracts after Ponchak’s arrival in 2017 and 14 were signed after Nicholson’s arrival. There were five players from the 2019 squad that went on to sign pro deals.

That team’s goalkeeper, Wesley Storm, now playing in the Dutch top flight Eredivisie, spoke highly about his time in Cincinnati.

“Brandon and Paul made me feel at home from day one,” Storm said. “It (CDLFC) really feels like my American family and I’m really, really thankful for that and I do miss it a lot there.”

Said Detroit City’s Tendai Jirira, formerly of CDLFC, “I really enjoyed working with coach Paul and coach Brandon. They demand a certain brand of play and energy. My interactions with them were very good, and they helped me a lot to get to the next level. They helped me get ready for being professional through the interactions on and off the field.”

The club went into 2020 expecting to have two full squads — one competing in USL 2 and one U-23 squad competing in the newly formed OVPL. This past winter, the club had more than 50 players show up for its open tryout. There was a lot of talent at that tryout, and at that point the club looked to have a solid plan in place for 2020.