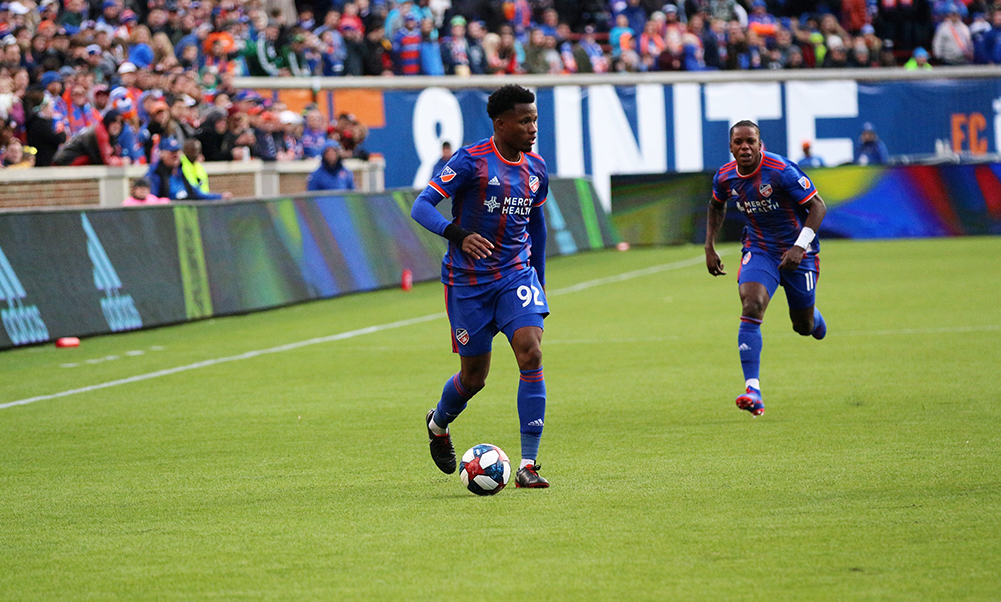 FC Cincinnati won its home opener vs. last year’s Western Conference finalist Portland Timbers. In addition to our match report, we will recap each individual player performance for the match.

FC Cincinnati won its home opener vs last year’s Western Conference finalist. In addition to our match report, we will recap each individual player performance for the match.

Przemyslaw Tyton, the presumed starting keeper, was sidelined again with injury, but FC Cincinnati didn’t miss a beat. Richey looked right at home in his old USL home Nippert stadium. He made two major saves, one at point blank range, and the second stopping a rocket fired from just outside the box. Richey doubled his Audi Index from last week but we cannot double his ranking. Clean sheet, good saves. Richey receives an eight as he only suffers from not receiving enough shots.

Powell, like FC Cincinnati as a whole, has improved week over week. Playing against Portland, he knew when to advance and when to retreat. Powell did well clearing the ball this week but still could improve when it comes to his long ball game. Overall, his passing average is up, and he also improved in the attacking half which looked like a glaring weakness after week one.

Hagglund got dinged this week for his passing and ariel duels lost, but most of those were in the opposition’s half or long passes forward. This match didn’t require the same workload from Hagglund as the previous two. FC Cincinnati was much more aggressive, and Portland struggled to get through the midfield and create good chances. Hagglund still had a couple of clearance but ranks average due to the play in front of him.

Scoring a goal is the best and most unexpected thing a defender can do for their team. Waston set the theme for the night by heading in a set piece from Leonardo Bertone in the 15th minute. On defense, Waston suffered a similar slow game for the same reasons Hagglund did. He didn’t complete his long passes forward at a very good rate, but in the end he scored a goal and nearly another and his score reflected that.

Kendall Waston talks with @Katie_Witham about his goal celebration after scoring the first-ever home goal for FC Cincinnati 🦁 pic.twitter.com/3y9tuuMjyS

Speaking of defenders scoring goals, way to get forward at the right time Deplagne. Greg Garza was subbed on late in the second half, and it shifted FC Cincinnati’s lineup some but still, check out how far up Deplagne is in the box via the clip below. It is hard to find a negative element in Deplagne’s game. I’m saving a perfect score for some future hat trick so Deplagne gets a 1o but -1 for not scoring two more.

On March to Matchday, Brad Weigel said that Ulloa was the key to this match. In a way, he was but as a silent contributor. He had one shot on goal and zero assists, but he did complete two-thirds of his passes in the opposing third. Not much to write home about for Ulloa, but he put in a solid performance and was a big part of keeping Portland at bay in the midfield. I’m sure Brad wanted to see something flashy, but he will need to wait another week as Ulloa’s job gets harder without several teammates.

Assist the first goal of the match and hold off Portland in the midfield equals a solid shift by Bertone. Quickly turning into FCC’s set-piece kicker, Bertone is making himself a fan favorite early. What fans may overlook is that Bertone lost more long passes than he completed. He was not exceptionally good outside of FC Cincinnati’s half in the run of play, but he did his primary job well and lands bonus points for the assist.

Lamah was a victim of his team performing well. He got forward with Adi often in the first half but couldn’t connect on the passes inside. The ones that did land usually were passed right back out. Lamah lost 11 and completed 14 passes in the attack, and that just isn’t good enough without any results to go along with it. With the defense coming up and scoring two-thirds of the goals Sunday, Lamah took a back seat after saving the day in Atlanta.

Manneh picked up where he left off vs. Atlanta. Portland had no idea what to do with his pace and resorted to fouling him and taking a red card to prevent a possible fourth goal in the second half. Manneh played better than his stats show. He lacks goals or assists this week, but his play contributed to the chances FC Cincinnati were able to create. Manneh got a 7.5 last week, and even though he did improve, we will give him a boost when the CAM position shows on the stat sheet.

A great second half for Cruz, as he wisely completes a no-look backheel goal to throw off both the defender and keeper in front of him. Cruz was pacey and smart with the ball and partnered well with Manneh. He drops points for his first half partnership with Fanendo Adi. If the offense could have clicked under the Adi hold-up style of play, FC Cincinnati fans would be more confident results like Sunday are repeatable.

Last week Adi earned a 6, and it was justified as putting the designated player in this defensive system. Adi only got one half before taking an ankle injury and heading for the locker room, and that gives his ranking less to work with. Adi was fouled, Adi looked threating a couple of times, Adi failed to score in his third MLS game. DC United’s DP threw up a hat trick. If Cincy is going to make the playoffs, it needs a No. 9 that scores goals. After the match, Adi was reported to be on crutches, so he may be doubtful next weekend vs the New England Revolution.

Koch’s sub of the match. Mattocks comes in earlier than expected due to Adi’s injury, so he goes to work and produces results. One assist, four key passes and 12 completed passes ripping through the opposing half. Mattocks put more into his half-match shift than most do in 90 minutes. The only item Mattocks didn’t achieve was a goal. He maybe could have had it against a 10-man Portland side if FCC didn’t move to keep-away ball toward the end.

Garza made less of an impact vs. Portland than he did at Atlanta, but that isn’t a bad thing. At this point, Koch is working on Garza’s minutes, and Cincinnati had little need for goals when he came into the match. Greg passed well enough and only had one noticeably bad turnover. When he completes more of a match a better rating will be justified.

The crowd went wild for the FC Cincinnati USL star. He has created magic at Nippert before, but he didn’t get enough time Sunday. FC Cincinnati and Portland had already thrown in the towel it seemed when Ledesma made his debut. He still got involved in one play forward but couldn’t get the ball down to make a strike. Hopefully he keeps training and Cincy fans see more of him soon.

Here comes Emmanuel Ledesma, making his MLS debut and coming on for Manneh in the 85th minute. Apparently Alan Koch heard you all asking for him. #FCCincy

Last week Koch got bonus points for his great subs. This week follows a similar path, but his hand was forced by the early Adi injury. Waston may have scored early, but Mattocks changed the flow of the match and put Portland on its heels even when it had the ball. Koch entered the home match with a plan and got a goal. Koch was forced to change that plan and netted two more as a result. Win 3-0 and you silence the critics.