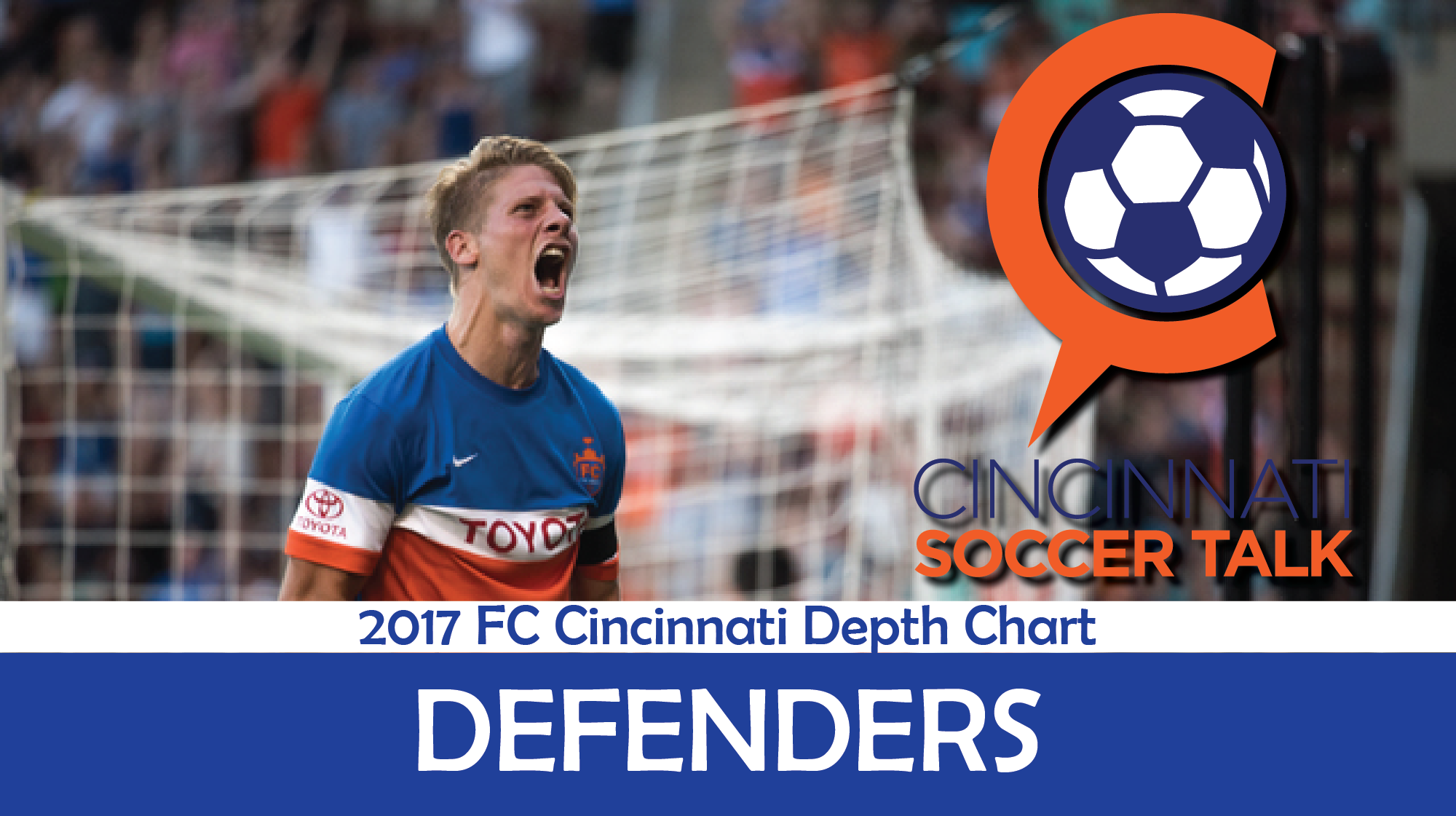 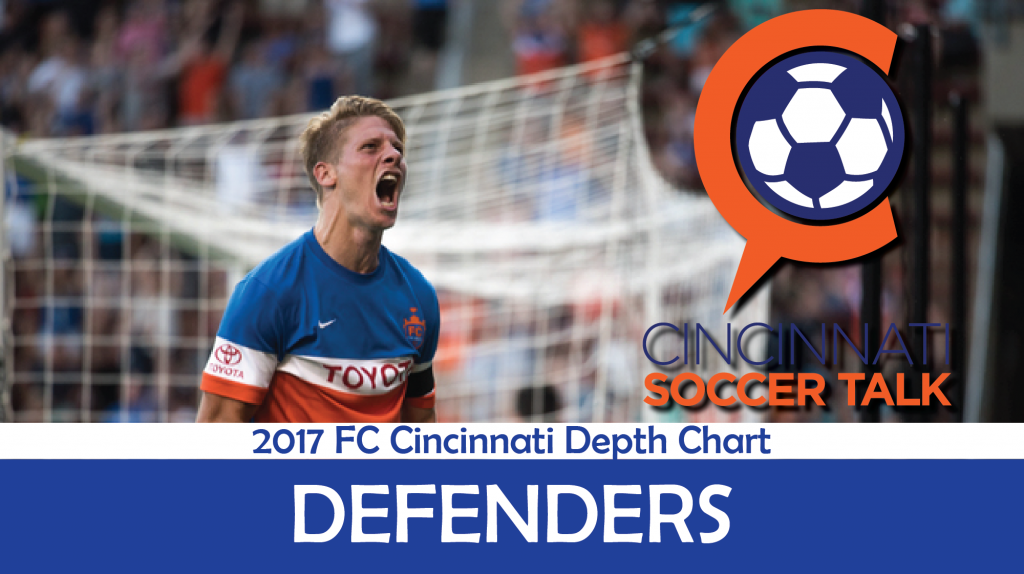 In our final edition of our FC Cincinnati Depth Chart, we look at the defensive unit that returns nearly the same squad in 2016. Led by captain Austin Berry and All-USL 1st Team defender Harrison Delbridge, the club will look to improve upon the form that ranked them top 5 in goals against. Added to the fullback corp will be former UC Bearcat and Lakota West product Matt Bahner.  Bahner provides cover across the entire back line and could see time at all 4 positions. Missing from the squad is 1st choice off the bench center back Evan Lee. Lee signed with USL Eastern Conference rival Richmond Strikers. Paul Nicholson has transitioned to CB to take Lee’s spot but the club has been auditioning several players and could add another player before the season starts.

1A) Austin Berry- The former MLS Rookie of the Year and Cincinnati native returns as captain for the sophomore campaign. Berry, limited by injuries in 2016 played in 19 matches but tied for 4th in goals with 3. He is a dominant presence in the box on both sides in the ball. With the addition of a player like Aodhan Quinn in charge of corner and free kicks, I expect Berry to net several times again this season. Unfortunately, Berry’s status is up in the air at this point. The club has not released his status but he looked to have severely injured his arm/shoulder towards the end of the friendly in Sacramento that could force him to miss several weeks to begin the season.

1B) Harrison Delbridge- The Aussie returns to the squad after a career year that earned him 1st Team All-USL honors in 2016. He led the back line appearing in 29 regular season matches for the club. At 6’4″ and shaped like an NFL wide receiver, it’s not shocking he is superior at winning the ball with his head. What won me over was his ability to win slide tackles. Game in and game out it seemed like Delbridge got the club out of difficult situations winning the ball on the ground while avoiding the foul. With Berry’s injury, it will be important that Delbridge organizes the group for a strong start to the season.

Check out this hype video from @fccincinnati for footage from last season.

2) Paul Nicholson- “Nico” was an important member of last season’s squad when Austin Berry went down early to injury. Originally a defensive midfielder, the Englishman may have to step up once again this year to replace the captain. Nicholson made 22 appearances between the midfield and CB. If Berry can stay healthy and the club signs another CB you could see him back in the midfield in 2017.

RB-1) Matt Bahner- The Cincinnati native and Lakota West product joins the squad after spending the last 2 seasons as a member of the Jacksonville Armada in the NASL. Bahner appeared in 24 matches scoring 3 times last season playing both fullback positions. He has been a proven performer in the league earning 2nd Team All-USL honors with Harrisburg in 2014. That same season, he lost in the USL Championship to Delbridge’s Sacramento squad. What made me move him into the RB-1 position is his ability to get forward on the attack, especially in the 4-2-3-1. Against Xavier, Bahner put the ball in dangerous scoring positions for Fordyce and Djiby several times. I also like his on the ball skills and his use of his left foot allows for flexibility to partner with McMahon or Polak on either side this season. If you like an idea of what he can do view this video, it’s filthy at times.

RB-2) Pat McMahon- It was a hard decision to drop the incumbent because he really didn’t do much to lose his spot. “McMANBUN” appeared in 26 matches last season and with his nickname, became one of the more popular players on the squad. A member of the 2015 USL Champion Rochester Rhinos, the right back is a very reliable defender. He may not provide that spark going forward like Bahner but he rarely makes mistakes. With the loss of Berry and conceding a lot of goals this preseason, it may be important for Coach Koch to keep one of the best defending right back in the league on the field.

LB-1) Tyler Polak- The native of Texas was one of my top performers in the 2nd half of 2016 after some early season struggles. He had 30 appearances in Orange & Blue and led the field players in minutes with 2,514. What makes him critical to the success of the club is his ability to get up the flanks and cross the ball. With an expanded pitch at Nippert this season, there should be a bit more room in the box. It will be critical for Polak put players like Djiby, Mansaray, and Fordyce in dangerous goal scoring situations to win in 2017.

LB-2) Derek Luke- In 2016, Luke served as the primary back-up on for both the left and right back positions. He was more than serviceable appearing in 27 matches. So far this offseason he has been on the mend from an injury and got his first action with 15 minutes against Xavier. With the addition of Bahner and the change in rules from 5 to 3 subs, time could be harder to come by in 2017.