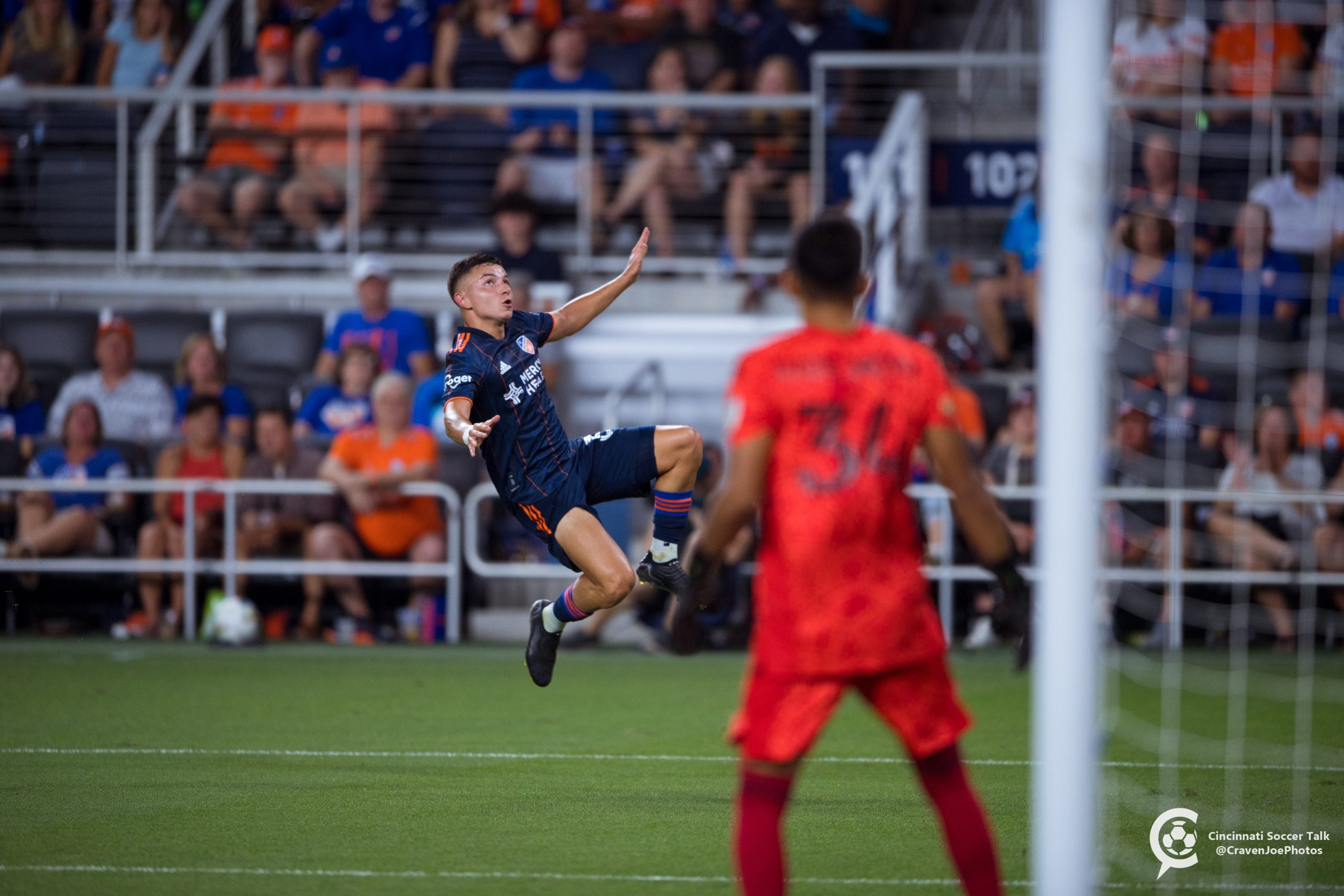 A frustrating draw but players are stepping into larger roles

More controversy marked FC Cincinnati’s 2-2 on Saturday against Atlanta United. FCC couldn’t overcome a goal of the week contender from Thiago Almada and a, let’s say, questionable equalizer from Andrew Gutman and settled for a point. Brandon Vazquez and Brenner continued their torrid run, scoring their 15th and 9th goals of the season respectively. Both goalkeepers stood on their heads at points (4 combined goals allowed on 5.6 PSxG) to keep the score level.

Matt Miazga made his debut and looked every bit the player FCC supporters would’ve hoped, even coming off of a limited preseason with Chelsea and just a week of training with the Orange and Blue. Though he was limited to 65 minutes in his first game, Miazga contributed defensively and looks like he’ll not only solidify but also improve FCC’s backline.

With the draw, the Orange and Blue fell below the playoff line in the Eastern Conference, though the nine teams spanning 5th through 13th in the conference are separated by just five points. Miazga should help down the stretch but I wanted to dig into two other players whose performances will be vital if FCC is to finish the season in playoff contention.

I wrote a little about Álvaro Barreal last week but it’s worth digging further into what he brings as he’s made the left wingback spot his own.

First, on the defensive side of the ball. Barreal is still adjusting to playing wingback position which makes sense. His high work rate ensures that he’ll stay in plays when other converted wingers might not. Against Atlanta, he contributed defensively, racking up three tackles, three interceptions, and two clearances. He’s not going to be a lockdown defender on the left flank but the upside he provides going forward more than makes up for it.

Playing as a wingback in a lineup with three center backs should help too. Miazga helped cover up the left side in transition moments when Barreal was caught upfield. If Miazga shifts centrally and Ian Murphy ends up in the left center back spot in future matches, his pace and quickness should provide similar cover.

Barreal’s real value as a wingback comes going forward. Against Atlanta, he didn’t have his most accurate passing day, 23 of 37 in total with just 1 of 9 on passes traveling more than 30 yards. However, Barreal’s presence provides another variable for opposing defenses to account for. Playing on his naturally stronger left side, Barreal can provide real width to FCC’s attacks. Take this sequence from the 19th minute against on Saturday.

With Geoff Cameron in possession of the ball near midfield, Barreal is pushed up high on the left wing. Cameron pinged a long ball towards him, which Barreal, with all the technical ability you might expect from a winger, controlled despite pressure from a defender. Barreal, again operating in the manner of a highly-regarded attacking talent, took on the defender, beat him, and hit a cross towards the near post. Brandon Vazquez, as he so often has this year, makes an excellent run and nearly got the end of the ball, only to be barely beaten to it by Atlanta’s goalkeeper. 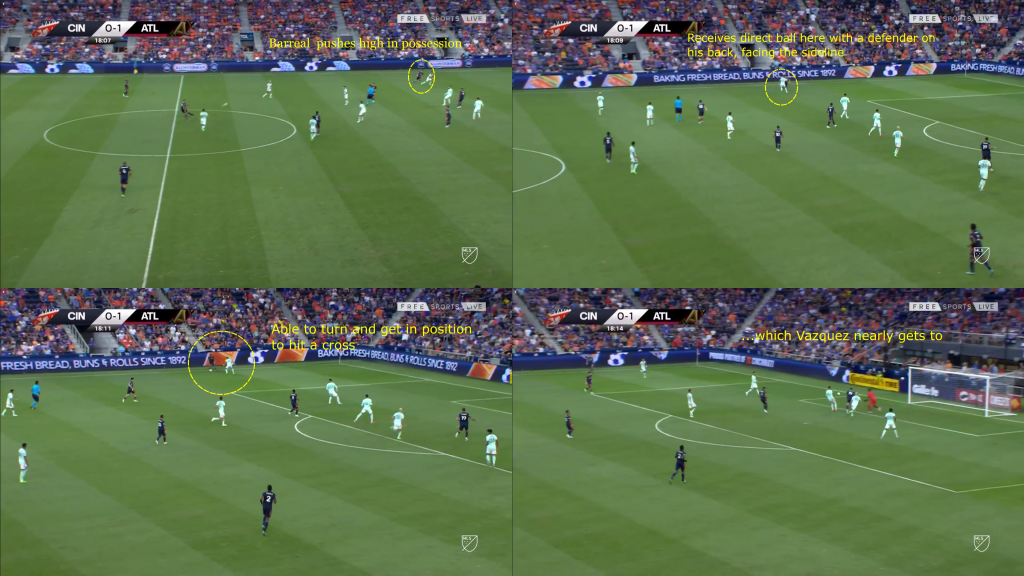 Barreal’s ability to beat isolated defenders in wide areas one-on-one adds another wrinkle to the Orange and Blue’s options in the final third. In addition to the danger he can provide underlapping, Barreal makes FCC’s attack more potent. He’s certainly not a finished product at wingback and it’s certainly possible there could be defensive mistakes or lapses before the end of the season. The contributions going forward should ensure that he’s solidified his place as a starter for the Orange and Blue. If he can continue to take some of the pressure to create scoring opportunities off of Lucho Acosta’s plate, FCC should be able to score enough goals to make a real run at the playoffs.

Roman Celentano has made the most of his opportunity as FCC’s #1 after a series of injuries to free agent signing Alec Kann. Celentano made a couple of huge saves on Saturday, keeping FCC in the match, though the draw was ultimately disappointing. 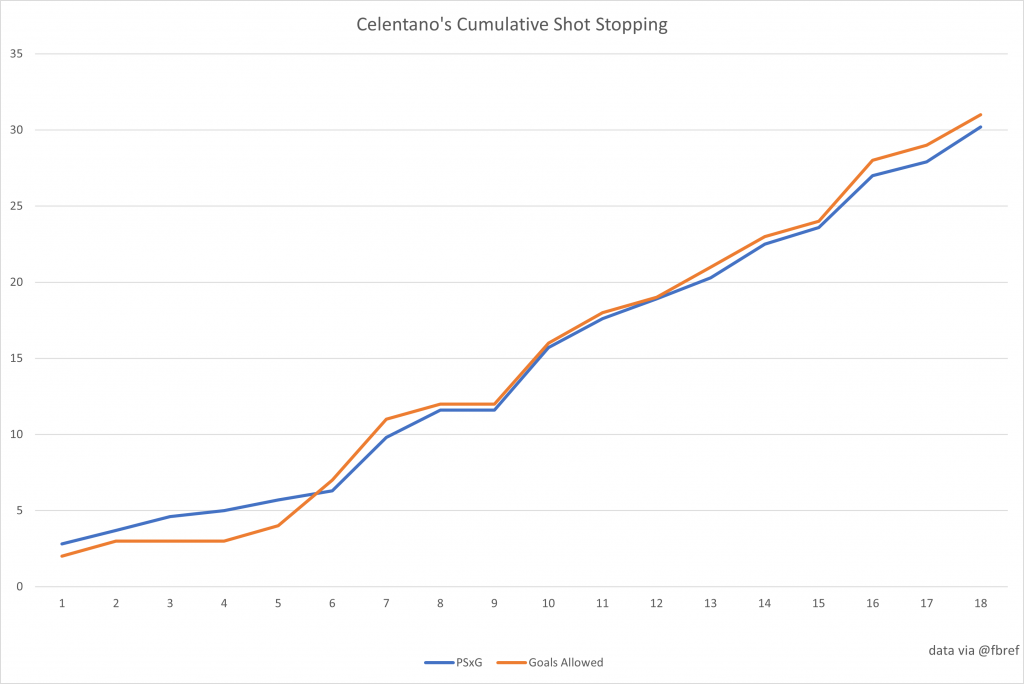 I should also note the role penalties play in this statistic. Because penalties faced factors into PSxG, the fact that Celentano has faced five penalties, saving one, inflates the quality of shots he’s faced. Both the penalties faced and scored totals are tied for the third highest in MLS. FCC’s seven goals conceded on corners while Celentano is in goal doesn’t help matters, either. Assigning blame for corner kick goals is tough but as Celentano gets more professional minutes, we can hope he’ll improve making better decisions on set pieces as well as setting up his teammates to better defend them.

On crosses, Celentano, again, ranks near the middle of MLS goalkeepers. His 6.5% stop percentage on crosses is 16th out of 30 goalkeepers. For reference, the league leader is Vancouver’s Thomas Hasal, trailed closely by RSL’s Zac MacMath, stopping 12.7% and 12.4% respectively. Two of the better shot-stoppers in the league Stefan Frei and Dayne St. Clair bring up the bottom with 3.5% and 2.7%.

To my eye, Celentano’s distribution has improved as he’s logged more professional minutes. He still ranks highly for “launched” passes. Those don’t include goal kicks but are passes traveling more than 40 yards. Celentano at 49.3%. However, with a target like Brandon Vazquez to aim for, playing direct is a much more palatable option. Regardless, Pat Noonan’s system isn’t likely to feature playing out of the back often like some other teams.

Like I said, getting average goalkeeper play is a huge upgrade for the Orange and Blue. Getting it from a goalkeeper who has played just 18 MLS games bodes well for the future assuming Celentano continues to improve.