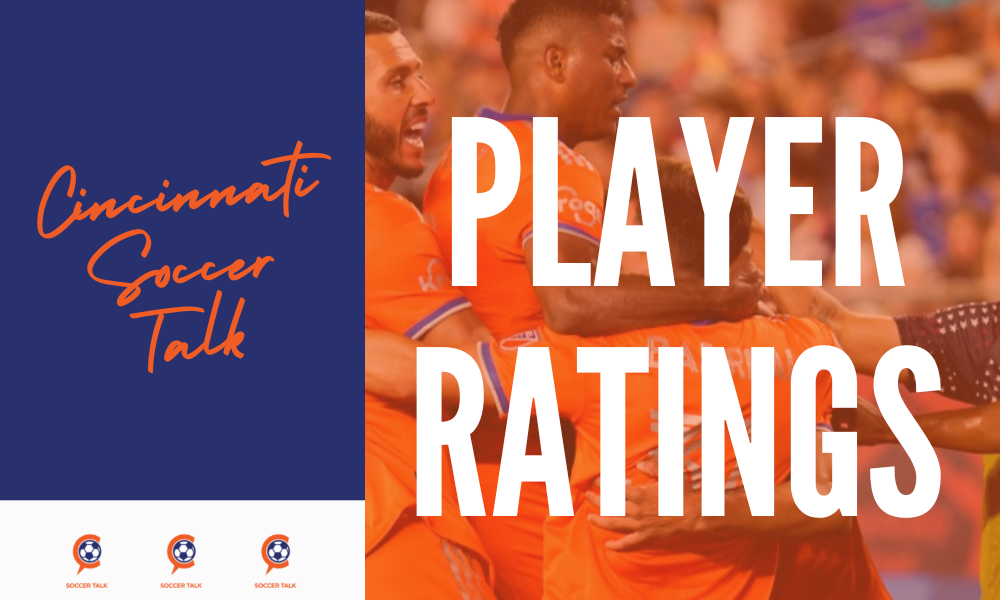 FC Cincinnati hosted Atlanta United on Saturday with a chance to put some breathing room between themselves and the playoff line, but instead fell below that line into 9th place after drawing 2-2. The Orange and Blue came out sleepwalking and were put under pressure by Atlanta United from the opening kick. Thiago Almada opened the scoring in the 17th minute with an absolute banger, but Brandon Vazquez woke his team from their slumber by equalizing from an Obinna Nwobodo pass in the 29th. Then, minutes before halftime, some shoddy set piece defending gave Brenner the opportunity to head home, giving FCC the lead heading into the break. After a 2nd half that was largely back and forth and not too eventful, the familiar story of snatching a draw from the jaws of victory played out when former Fooser Andrew Gutman leveled the score in the 83rd minute. Both teams left the pitch unhappy with the draw and sharing the points.

Pat Noonan has been largely excellent in setting his team up for success using appropriate lineups and tactics. However, his substitution patterns have been suspect at times, and this match was no different. He went into the match knowing that he was going to have to use a center back substitution sometime around the 65th minute because Matt Miazga was on a strict minutes limit. Therefore, he needed to plan his subs accordingly.

First, he used the aforementioned substitution in the 66th minute bringing on Tyler Blackett for Miazga. With Blackett’s erratic (to put it kindly) performances of late one might question whether it would have been better to insert Gaddis and move Powell to RCB, or even play John Nelson at LCB. Second, using this sub window for only one change tied the manager’s hands down the stretch. When the midfield was severely tiring he made another change, bringing on Nelson for Álvaro Barreal. This used another substitution window and failed to address the midfield. Then, after Atlanta United equalized, Noonan only had one window left to try to wrestle the lead back from the visitors.

It is really easy to question substitutions after the fact. However, anyone could see how ragged the midfield was (especially Junior Moreno), by the 75th minute, yet Noonan failed to pull the trigger on changing things up.

Celentano was excellent between the pipes in this match. He gave up 2 goals on a post-shot xG of 2.3, and neither of them were really savable. His save in the 43rd minute, scrambling across his goal line to cover for Powell’s mistake and deny Araujo at the back post was phenomenal. He also made an excellent save on Josef Martinez in the 72nd minute that wasn’t counted because Martinez was ruled offside. The only real slight against the rookie at this point continues to be his distribution… but that is a very small thing for a young goalkeeper that has shown this kind of promise as a shot-stopper.

Powell didn’t have a terrible match, but he didn’t excel either. He logged two tackles, interceptions, and blocks, as well as contributing 4 shot-creating actions. Those numbers would typically garner a much higher rating, but he also turned the ball over a fair bit. His 73% passing wasn’t good enough for a defender and included a costly turnover that led to Atlanta hitting the post. He also nearly cost his team a goal by trying to see a ball out over the goal line and allowing Caleb Wiley to round him and gain possession in the box. He was credited with a mistouch and was dispossessed 3 times. Finally, he committed 2 fouls and won only 4 of his 9 ground duels.

Hagglund’s defensive stat line was typically solid. He won all 3 of his aerial duels and had 3 blocks and a tackle. However, he was also dribbled once. Furthermore, it was his failure to rotate out in time to stop Almada from having an open look that was partially responsible for the opening goal. Also, he logged only 7 pressures (he averages 10 per 90 min.), with only 1 of them leading to a change in possession. Add to that his sub-80% passing and completing only 3 of 8 long passes and you have a lower than average performance.

Cameron’s higher-than-average rating is slightly skewed because he earned a rare assist, but his awareness to wait for the 2nd ball on the corner and put it back toward the net was crucial. He also was excellent on the ball, logging 92% passing, including 5 of 6 long passes. In fact, he was 2nd on the team for progressive passes with 4. So why only a 7? He failed to log a tackle and didn’t win either of his 2 ground duels.

Miazga’s debut was good, though it was clear that he was carrying some preseason rust. His passing percentage was good (85%), but he completed only 3 of 6 long passes. He was dribbled once and logged only 5 pressures. However, he also contributed 3 tackles, 5 blocks, and an interception. His communication was constant, his quality was evident, and it appears that as he rounds into form he will be an excellent addition to the back line.

Barreal came a bit back to earth from his excellent performances of late, but he still had a good match. He had 3 each of tackles, interceptions, and blocks. and was not dribbled a single time though Atlanta tried. He also won 4 of 6 ground duels. Oddly, his struggles came on the offensive side of the ball where he was not able to find an accurate cross in 6 attempts. He also only completed 1 of his 5 long passes and failed to log a key pass. Finally, he was dispossessed once and had 2 mistouches.

Obi’s match against Atlanta United was quieter than typical but his score remains high due to his excellent assist. His 79% passing was below his season average (85.3) and only 2 of them were progressive. He also had an uncharacteristic 2 mistouches. However, he was still incredibly active defensively leading the team in recoveries (10), tackles (5), and pressures (33).

Moreno looked gassed from the first kick of the ball here. The eye test told me that he simply was not nearly as involved defensively as is typical. The stats back that up. His 2 tackles, 14 pressures, and 1 block were all below his season average. His passing percentage was also down (81% from 88%), and he didn’t log a single progressive pass. Moreso, it was his failure to transition to defense quickly enough that led to Atlanta’s opener. The fact that he played the full 90 minutes and was not pulled in favor of Yuya Kubo or Allan Cruz is beyond me.

Like many of his teammates, Lucho had a slightly down match. His 9 shot-creating actions and 1 assist are fantastic numbers. However, he was badly outdueled, winning only 3 of 12, and committed 3 fouls while drawing only 1. He was dispossessed twice, which is fairly typical for his all-out attacking style, but his 6 mistouches stat is excruciatingly high. Like Moreno, he looked out of gas down the stretch when his team needed to hold onto a lead, and accordingly, he wasn’t quite able to finish the final good chance of the match that could have won it for the Orange and Blue.

Brenner’s 9th goal of the season was key, but not even the best part of the striker’s match. He was dangerous throughout, logging 1.81 post-shot xG on 5 shots. He also added 5 progressive carries, won 60% of his ground duels, and drew 3 fouls. His match was not flawless, as he was dispossessed once and had 4 mistouches.

Vazquez’s continued his excellent run of form, scoring his 14th goal of the season. He had only 3 mistouches, which is an improvement over his average (nearly 4), but his 68% passing was a bit low. He also only managed only 1 shot-creating action. However, what he lacked in offensive bite he made up for with defensive effort, logging 21 pressures, a tackle, and 2 interceptions.

Tyler Blackett has continued to struggle mightily whether starting or coming off the bench. In his extremely limited time on the pitch, he managed to commit 3 fouls and lose all 4 of his ground duels. He was also dribbled once. The nail in the coffin was his inexplicable whiff on a simple ball into Josef Martinez that led to Andrew Gutman’s game-tieing goal. Blackett’s performance makes me regret my rule of never giving a player a 0 rating.

For as excellent as Nelson tends to be as a starter, he seems to struggle coming off the bench. His 67% passing simply isn’t good enough for a player getting most of his touches in the defensive third. He attempted 2 crosses, neither of which were accurate. Defensively he wasn’t a game-changer either. He logged only a single pressure while failing to earn a tackle, block, or interception.