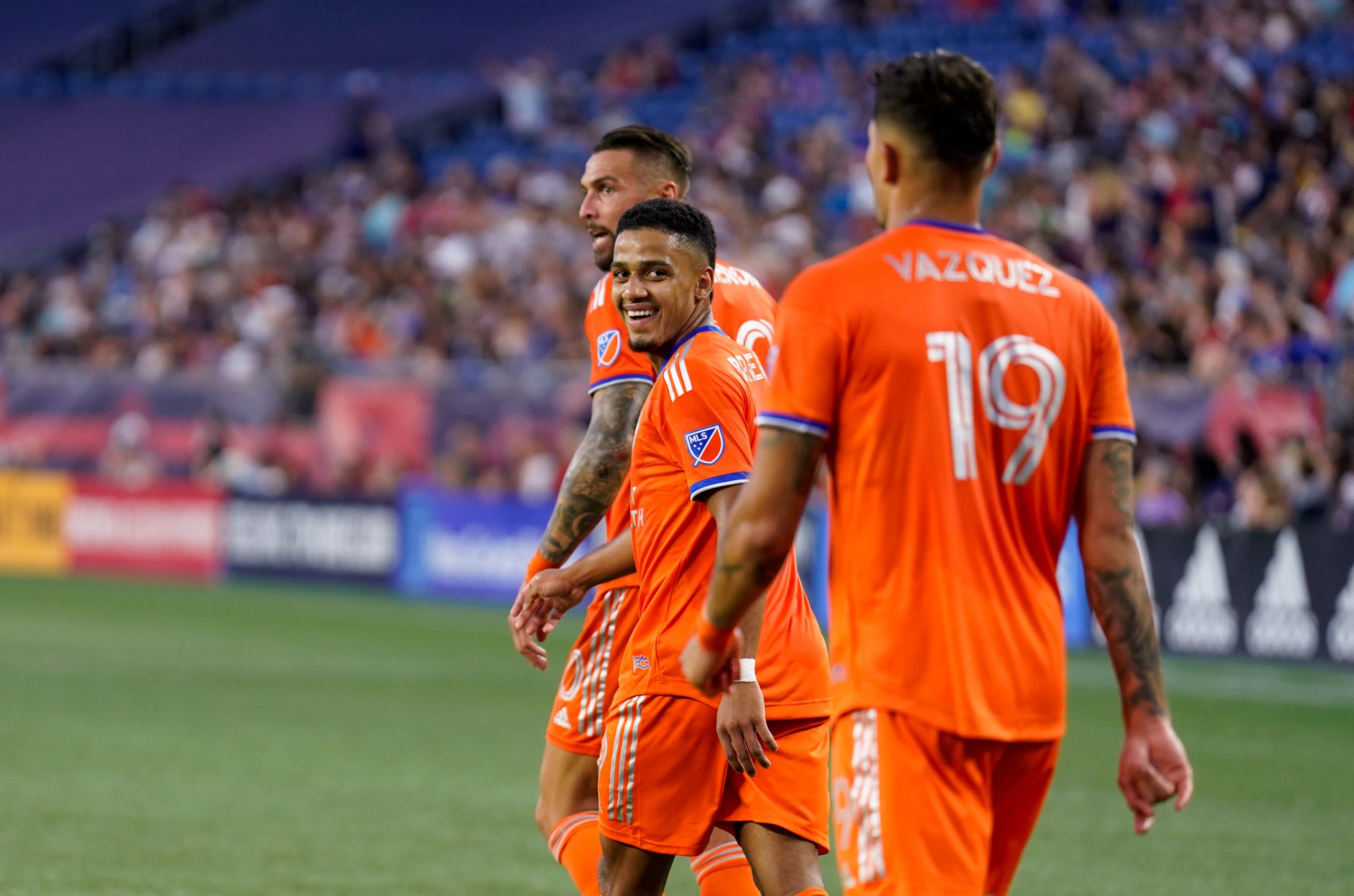 FC Cincinnati started the second half of the MLS season with a respectable draw on the road against the New England Revolution. Since returning from the international break in June, the Orange and Blue are unbeaten in four, with draws against the Philadelphia Union and NYCFC, and win over Orlando City. Through 18 matches, FCC is in 5th place in the Eastern Conference with 25 points, also a team record since joining MLS.

Even after a week where FCC picked up two points, one at home, one on the road, against the reigning winners of MLS Cup and the Supporters’ Shield, it was easy to feel a little hard done by. FCC had chances to take six points instead of two. The NYCFC game was marred by ten minutes of madness around half-time and some, let’s say, controversial refereeing. The Orange and Blue went toe-to-toe with the Revolution and had late-game opportunities to walk away with all the points.

Sure, not turning either draw (or both) into three points could have an impact in September and October as the playoff race intensifies. I get that line of thinking. But at the same time, I’m struck by the fact that we’re even having these kinds of conversations. In my view, it’s good to have higher expectations now!

Before the season, all I hoped for was to be watching and writing about meaningful games through the summer. Chris Albright’s work tweaking the roster and the job done by Pat Noonan and his coaching staff to put a roster that is some different but not totally overhauled from the 2021 iteration is remarkable.

For a little bit of perspective, after its 18th game last season, FCC was 3-7-7 and sat on 17 points. The Orange and Blue had just drawn its fourth straight game to CF Montreal, a stretch of draws in which FCC scored just one goal. Oh yeah, FCC would win one more game, losing 15 of 16 matches.

Sports are more fun when the stakes are higher. It’s certainly not a feeling I’m all that accustomed to as a fan of Cincinnati sports. However the second half of the season goes, I’m confident that FCC is on the right track. Even without a major incoming signing and even if the Orange and Blue finish on the outside looking into the playoffs, the future is brighter than it’s ever been. Games are going to be more stressful and losses will hurt more but we’re setting up to have a summer of meaningful soccer. I’ll take it.

Now that I’ve gotten through that, back to your normally scheduled programming of nerdier stuff.

The Brenner Bandwagon Is Departing The Station

I have to start with Brenner. Yes, I’m fully aware that this is the third straight week writing about him but I think most of you will find it in your hearts to forgive me. The arc of the last three weeks has been “maybe he’s getting there” to “I’m more convinced and hope he stays” to where we are now, which is, “Brenner’s numbers sure look a lot like Brandon Vazquez’s did at the end of last season and he just won Player of the Week.”

Brenner is only one goal away from reaching his non-penalty mark (6) from 2021, while playing 2,000 fewer minutes. In 735 minutes, Brenner’s non-penalty xG per 90 is 0.60. NYCFC’s Taty Castellanos leads qualified MLS players with 0.65 npxG/90. Brandon Vazquez is 14th, putting up 0.47 npxG per 90 minutes. Again, the usual caveat: we’re looking at small sample sizes here. However, the other numbers in Brenner’s attacking profile are moving in the right direction too.

According to Football Reference, Brenner is taking more shots per 90 minutes in 2022 (3.78) than last year (2.10). Also importantly, he’s taking those shots closer to goal, an average of 17 yards from goal last year versus 13 yards from goal this year. Those changes are clear looking at his shot map for the two seasons. 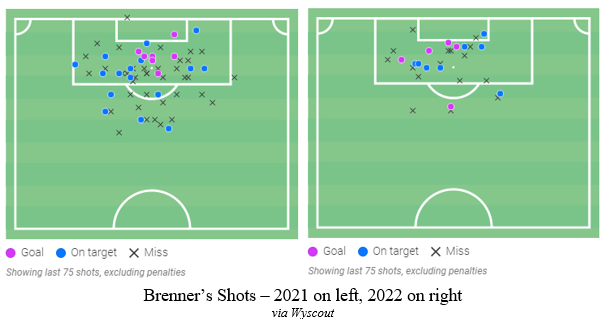 As mentioned above, Noonan and his staff have been working with a very similar roster to last year. Putting players in positions where they can succeed has been an emphasis of this coaching staff for its entire tenure in Cincinnati. Getting the ball to Brenner in positions where he can take shots is a part of a good offensive plan.

The development of a Brenner-Vazquez partnership will be vital for FCC’s playoff push (still surprised to be writing that in July) because they can take pressure off each other and give the Orange and Blue multiple avenues of attack. Against New England, Brenner’s 15 progressive pass receptions led the Orange and Blue, followed by Vazquez’s 11. Those progressive passes received aren’t the same, though. Brenner’s willingness to drop deeper in possession and combine allows FCC to build up play more methodically. Vazquez, Roman Celentano’s primary option on goal kicks, wins aerial duels and offers a line-stretching option in direct play.

As both players log more minutes together, and with Lucho Acosta’s nearby presence, FCC can threaten opposing defenses in multiple ways. If familiarity brings more productivity, a playoff run should be a very real possibility. At the very least, it’ll be fun.

FCC’s midfield was seriously tested against New England due to Junior Moreno’s ongoing leg injury and Obi Nwobodo’s forced absence due to yellow card accumulation. Up stepped Yuya Kubo and Allan Cruz. Neither player offers the defensive work rate of Nwobodo or the positioning of Moreno but, both helped FCC earn a valuable point on the road.

Kubo and Cruz put New England players under pressure on the ball, combining for 30% of FCC’s pressures during the game, most of them occurring in midfield. However, one of Cruz’s two pressures in the final third of the field led to Brenner’s equalizer as he forced a turnover that fell right to Acosta, who found Brenner in the box.

Kubo’s skill on the ball gives FCC’s midfield a little bit of a different look. The converted winger’s ability to glide past players on the dribble was on display throughout the match. Kubo’s six progressive carries were good enough for second-most on the team. Kubo made up for a midfield lacking some passing ball progression by doing it himself.

Cruz’s offensive role was interesting as well. Looking at the pass map, Cruz pushed high in possession and operated in parts of the field where FCC supporters are used to seeing Lucho Acosta. 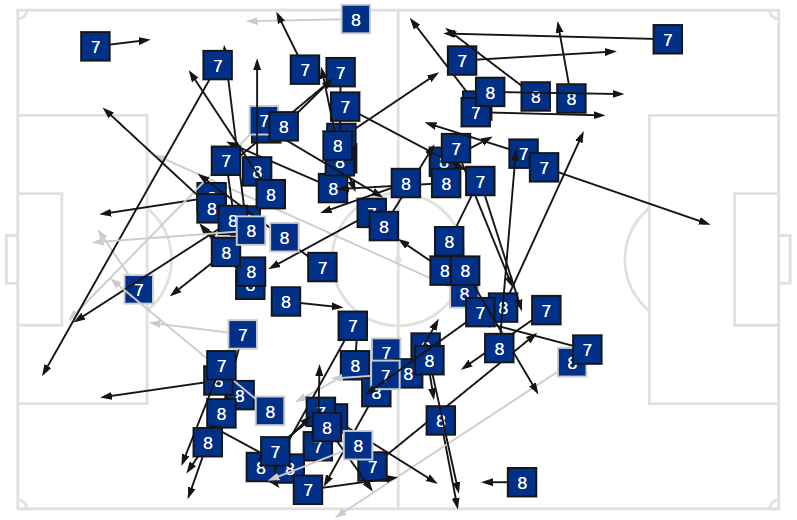 With Cruz on the ball in Zone 14, Acosta could drift around, looking for space to impact play. In a match without its top central midfield options, the depth pieces on the Orange and Blue stepped up. Cruz and Kubo didn’t operate like a Moreno-Nwobodo partnership but they did enough to earn FCC a point on the road against the best team in the league last year. I mentioned Noonan and his staff putting Brenner in a position to succeed earlier. That’s true of everyone on the roster. Kubo and Cruz coming off the bench after playing sporadically at best and delivering against a team in full-on win-now mode is a good sign for how the rest of this season might play out.