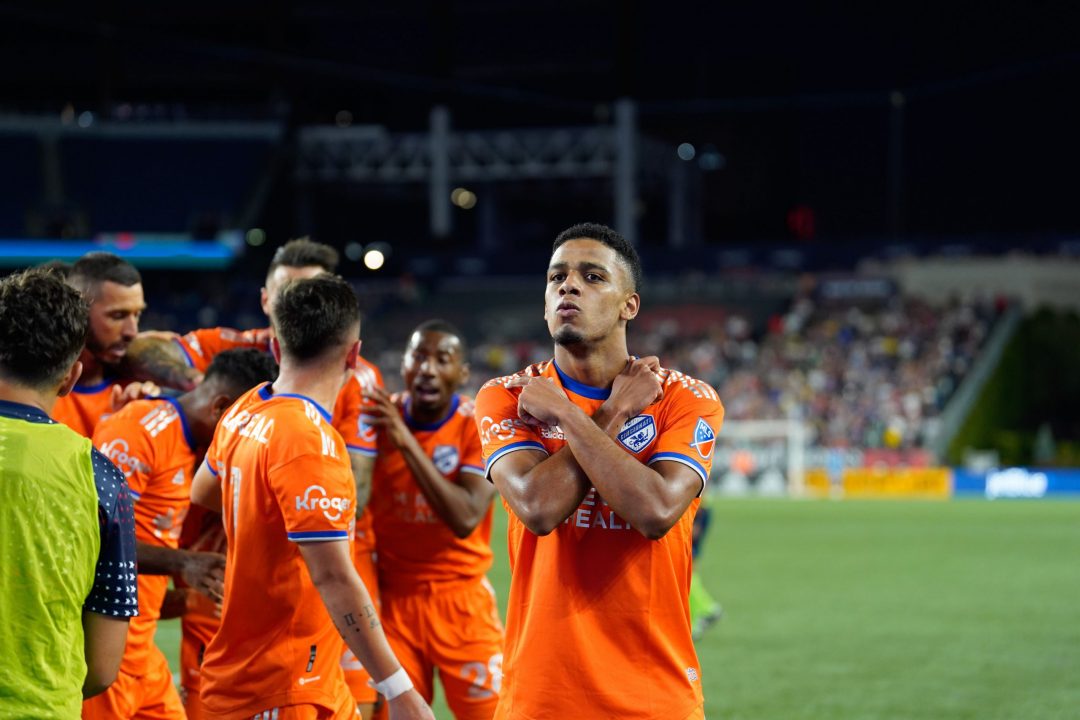 FC Cincinnati comes back twice to take a point on the road.

FC Cincinnati was able to come from behind twice to salvage a point away from home in a 2-2 draw in the team’s away matchup against the New England Revolution.

The match started quite slowly, as both sides were reluctant to really open themselves up for attack. The battle was waged in the midfield for much of the beginning of the game, bar a run in behind or two from either side.

The game started to get more open as it went on and what was evident even as the match stayed slow was Brenner’s energy.

The Brazilian was FCC’s best player in the first half by far for multiple reasons. He tracked back in the midfield to help connect the backline and the frontline. He also did outstanding when he had the ball. He played with his head up and played great passes to Brandon Vazquez and Lucho Acosta. He also was in great positions when he didn’t have the ball, allowing him to already be in advantageous places for good runs.

As the match went on, FCC really started to see the better of the chances. They were able to get good looks thanks to Brenner’s passing, with Acosta having a relatively disappointing first half.

However, these chances left FCC open multiple times over. As it turned out, the team’s center-backs struggled to keep up pace in the first half. Their passing, without the standard midfield, was worse. On quick plays, they also seemed to not be communicating well. FCC looked out of position at times and didn’t pass players off well, especially in the play that turned out to be the opening goal.

In the 30th minute, the Revolution struck the first blow as Dylan Borrero sent a rocket from close to the outside of the box into the back of the net. This goal was against the run of play for sure, but it also wasn’t surprising, as FCC’s backline had been anemic for much of the half.

Following this goal, the match settled into what it looked like before the goal, with FCC finally starting to see some set pieces, which struggled to land, especially the free kicks. However, one of those, a corner this time, ended up bearing fruit. Acosta sent the ball into the front of the box, and what at first appeared to hit Vazquez’s head actually hit Henry Kessler’s, and went into the net for an own goal and tied the score.

The remaining minutes of the half were nothing special in particular, as both sides seemed ready for the halftime whistle to see what they could adjust.

The second half started similarly to the first, with both sides starting rather slowly.

However, the Revolution started to put more pressure on FCC than it did earlier.  New England did a good job in thus half, overall, using the full width of the field and stretching the FCC defense. This showed in their wide breadth of chances. One of those chances included an outstanding glancing header from Gustavo Bou that was perfectly placed to get in behind Roman Celentano and into the back of the net.

Following this goal, New England saw even more of the ball and had a couple of chances to put the match out of reach. But, FCC wouldn’t allow that to happen and started to put more pressure on the ball. Unfortunately, Acosta continued his odd performance and had a couple of odd moments, including a horrendous free kick that he tried to flick behind the wall. The idea wasn’t terrible, just the execution.

FCC continued its attack and saw multiple moments that had great promise. However, one, in particular, actually worked in the team’s favor. Brenner, following a great interception from Allan Cruz, got the ball and rocketed the ball into the goal to tie the match back up at 2-2. This goal continues Brenner’s scoring streak to five goals in the past three matches.

This goal saw both teams have a couple more chances, including a great shot attempt from Haris Medunjanin and a few from the Revolution. However, neither team was able to find a way to get the ball into the goal for a third team, meaning FCC was able to come back and salvage a point.